I had one question for the NBA 2K15 representatives at this year’s gamescom: why do the NBA 2K games always look so damn good? They had a pretty simple answer for me: 85% of the players in the game have their faces scanned by 2K, the new game features over 5,000 extra animations on top of some ridiculous number and apparently the engine is pretty good too. So magic isn’t to blame after all - disappointing, but hopeful for those who aim to reach the visual quality of the NBA series. So that was my one question covered. I’m not an NBA fan you see, although I’ve actually played the game series quite a lot thanks to a friend who’s really into his basketball. But I decided to sit back and let the Visual Concepts team show me what they do best.

One new feature that struck a chord with me is the improved AI behaviour. Sports games have always had the issue of animating and coding realistic AI, just picture the weird crab-walking of FIFA and you’ll know what I’m talking about. NBA games have always had this issue, with players often running around like headless chickens, seemingly incapable of looking remotely realistic. You can make the game as visually astounding as you want, if those visual sprites don’t move like real people then it all falls a little flat. Which, I suppose, is why games like The Last of Us or Crysis are lauded for their visuals over games like NBA - basically, cutscenes are a lot easier to animate consistently. So this time around Visual Concepts has gone overboard to create an AI that moves around the court realistically and from what I could see this has paid off in bucket-loads.

Sorry, I went back to visual stuff again there. What can I say, it impressed me! So what’s changed outside of more life-like AI? Shooting has been overhauled and now relies much more on the player’s ability as opposed to a lengthy computerised equation. While previous games crunched a bunch of numbers (stats, distance etc) to decide whether the ball went through the hoop, the game now demands more of the player and bases the outcome on how they approach and take the shot. So that should be interesting to play around with - although it’ll also undoubtedly lead to a fair few smashed controllers shortly after the game’s release. Obviously Visual Concepts has made a fair few tweaks and changes to the overall gameplay, but NBA 2K14 fans will be at home from the off.

Aside from general improvements, the team have also brought some new features to the game with 2K15. MyLeague is the name of the game’s biggest new feature by a country mile. It’s essentially a hugely expanded Franchise mode, giving players the option to set up their own basketball franchise akin to the NBA itself. You’ll have to take my word for it when I say that there are a lot of customisable league elements - far too many to list. Highlights include the ability to set rosters and play an entire 80-year franchise (!) or even just one simple season. Things get really detailed too: you can set salary caps, difficulty levels, injury effects and a whole host of minute details. If you’re really into your sandbox sports modes, and I mean really into them, you could set up a huge franchise and play every single game. Talk about longevity.

That all comes in alongside an improved create-a-player mode, one that could allegedly use the Kinect to scan player’s faces into the game. That’s not a surefire feature at this point and Visual Concepts wouldn’t comment on it, but it seems like an obvious move. As well as the MyLeague mode, 2K15 will also see a fan-favourite feature return in the form of cheerleaders and mascots. It’s not going to add a whole lot to the gameplay, but it’s excellent for the collective presentation of the game, and something that was sadly missing from the first new-gen NBA game. It seems odd in hindsight that Visual Concepts had to restrict certain elements for the entry new-gen title, but with an extra year of work behind them it looks like the kinks of 2K14 have been ironed out.

Oh and apparently this is a big thing, but Pharrell Williams who sings songs about being happy has selected the soundtrack of NBA 2K15. You can actually find the track-list online and it’s unsurprisingly...wait...Depeche Mode? The Strokes? A-ha! Basement Jaxx. Yeah, that last one was predictable. Still, turns out Mr Williams has a nice varied taste in music. It certainly won’t sound like the typical sports game soundtrack, but it is also a bit worrying that Williams’ involvement in the game was the first thing the 2K reps told me about the game. On a lighter note, it’s definitely worth mentioning that the game will, for the first time, have a proper PC version released alongside the console version. No cutbacks or visual flaws, the PC version of 2K15 apparently looks even better than the PS4 and Xbox One equivalent. Which is the way it should be, really.

NBA 2K15 launches on October 7th for PC, PS4, Xbox One as well as the last-gen consoles, although certain features aforementioned may not be present in those versions of the game - so watch out for that. This is definitely your classic incremental sports release, but that extra year to work with the new-gen hardware seems to have worked a treat: the game looks even better, plays more smoothly and is packed with lots more features. Let’s hope it’s all enough to make it worth the upgrade. 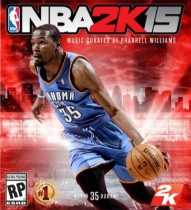