Never Alone. An interesting title to an equally interesting game. In this game, you truly are never alone. It's an interesting concept and it does the game very good justice. A well named game, for a well-thought through and designed game.

The origin behind Never Alone is one which is surprisingly unique. A group of very experienced and old-school developers (Some of these guys assisted in the first CoD, Quake and Doom games) wanted to make a game. Not just any game, a game with a purpose. A game that was different. This sounds cliche, I know, but let me finish. They were approached by Cook Inlet Tribal Council, an organisation that works with Inupiaq tribe members living in the Cook Inlet area. They presented the idea of Never Alone as something that 'shares, celebrates and extends culture'. It is based upon an actual Inupiaq legend and The Council wanted it immortalised in media, something that is difficult for the isolated tribe. So Upper One Games is helping them (and will continue to) in this quest with Never Alone, a videogame representation of an old legend.

Now, for the hands-on. A lot of the game/levels are already designed and the main job that Upper One Games is doing is refining and balancing levels. I was launched into the prologue which outlines the story of the game. The story is of a young Inupiaq girl in a tribe that is unable to hunt, and thus starving, because of an endless blizzard. She goes out to search for the source of the blizzard, but doesn't make it very far before collapsing on the ground due to the cold. However, she leaps back to her feet when a polar bear pounces out of the snow behind her, and that's where the player comes in.

Now, there's nothing more embarrassing than saying you're a fan of a certain game genre, and when it comes to playing it (In front of three developers), you completely suck at it. Well that's exactly what I did.

"I'm a big fan of 2D Puzzle Platformers!" I exclaimed as I entered the appointment. Five minutes later, I take control of Nuna (the Inupiaq girl) in a fast-paced escape sequence which launches you straight into the action and runs (no pun intended) you through the basic controls in a regulated and surprisingly calm way. 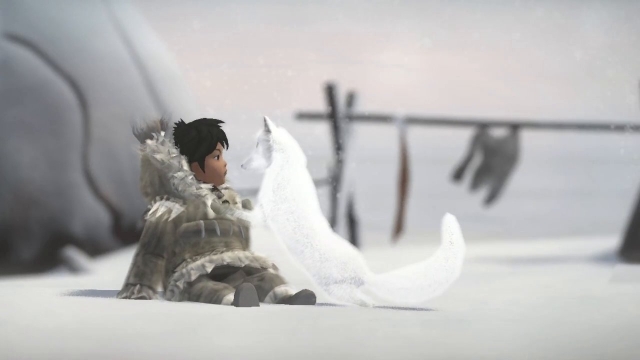 Except I kept missing jumps, mis-timing jumps, and sometimes forgetting to jump completely. Ah, don't worry it gets better. After successfully navigating the tutorial after several failed attempts, a gust of snow and wind knocks Nuna to the ground. She is backed up against a wall of snow and just when you think she's about to bite the dust (or snow), a small fox appears atop the wall. You press Y (I was playing on an Xbox controller) to take control of The Fox and it prompts you to leap off the wall and over the polar bear. I once again forgot to jump and plummeted right into the polar bear’s mouth and reloaded just before Nuna collapses. Being the 'Einstein of Gaming' that I am, I forgot to move completely and Nuna becomes polar bear chow. Next time I actually remember to move and when it comes to controlling The Fox I actually get over the polar bear!

Due to playing too many platformers in which you are always safe and able to take on anything, I do the most logical thing. Note that this Fox is half the size of this 10-11 year old Inupiaq girl. I turn around, face the polar bear (that is taking up about half of the screen) and leap straight towards it. Instead I jump through it and present myself to its jaws. In a mad attempt to get back behind it, I jump, miss, and go to leap again. But too late and The Fox disappeared (I have no idea how, I swear). One final attempt was made. I got to The Fox, but The Fox couldn't quite get to me. The developer that was beside me informed me that that section was still being balanced (What he probably meant was 'I need to show you the rest of the game sometime today') and he moved me onto the next chapter. 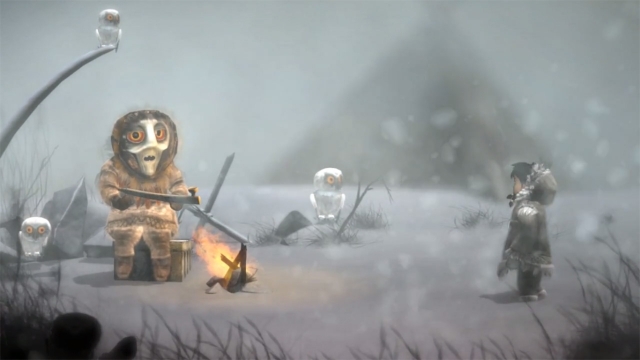 After luring the polar bear away as The Fox, Nuna finds a way out and is quickly rejoined by her fluffy saviour. The level begins with the player traversing the terrain whilst getting told a bit of backstory behind Nuna and it is implied that she may have known The Fox prior to the events of the game. When the game had its say it decides to make me look even more like a terrible person. Blizzards blast their way through the level periodically and you need to press 'B' to huddle into the ground and not get blown back (which I missed every time). After several times of getting thrown to the ground, I reached a wall. I tried jumping, but I couldn't reach it. Certain that I was just being an idiot, I repeatedly attempted to reach the top of the wall. The developer kindly reminded me that I could switch characters and I became The Fox (who follows Nuna automatically when not in control, and vice-versa). I leapt up the wall as The Fox and he latched on to it. He slid down and I decided to try pressing the 'A'  button. Lo and behold, he began scrambling up the wall as I pressed A more. Soon enough, I had made my way to the top of the wall and let down a rope for Nuna to climb up, allowing both of us to progress.

Team-work is a very big part of Never Alone, and this was made very clear when I was sent to the final part of the presentation, about half-way through the game. Not far into the level, I am presented by a small puzzle. There is a plank of wood that is too high for either character to jump onto, but there is a rope dangling from underneath it. Nuna can grab it, but The Fox can't... because he's a fox. Pulling this down as Nuna, both of them were able to travel across a gap. But at the end was another plank of wood that was out of reach, and a high wall, meaning I had to switch to The Fox. I scampered up the wall, hoisted safely on top and leapt over onto the wood, dropping it down and allowing Nuna to cross over safely.

This shows how much the characters need each other, especially further into the game, and you can't just play the game by barely changing character. After getting past the puzzle, you reach a cliff. There's no where to go from this cliff (unless you want to kill yourself) and I was quite stumped. Having learnt from my previous mistakes however, I decided to switch to The Fox to see if he could do anything. Turns out this little guy can summon Spirits to help him and Nuna on their journey. He summons several spirits which I had to jump across to get over (I only missed one jump this time!) and we touched back down on solid land. It was here I truly noticed that the AI was actually well made. The AI companion always followed you (whichever character you may be), but they weren't stupid. They wouldn't try to relentless charge into a wall if you're in an area as one character that the other can't reach and they did move away if the position they would be in is blocked, not accessible, or would cause them to die. I remember playing a variety of Sonic games and I'd always set-up Tails (or any other AI partner I may have) into jumping behind me and either hitting an enemy or completely missing a ledge and falling (only to re-appear moments later). 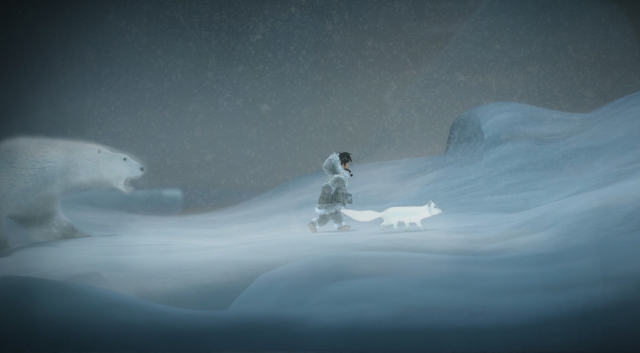 Anyway, enough of my sadistic recalls of the numerous ways I found of torturing my AI partners. Back onto the game! After crossing over the spirits I found a wall, even higher than all the others I had previously encountered. Curious, I tried scrambling up the wall as The Fox. To my dismay, he fell just as I reached the top. Before I could try it again, another spirit appeared, just out of reach of my basic jump. I tried scrambling up the wall and, whilst I was able to get level with it, I just fell down completely before I could reach the top of the wall. After attempting several times, I suddenly leapt backwards as I reached the top of the wall and landed on the Spirit. The motion surprised me and I accidentally preceded to jump off the Spirit and land next to Nuna with an awkward 'flump'. I scrambled the wall again and, as I reached the top, I flicked the analog stick backwards and launched off the wall. This time I landed on the Spirit and remained on it long enough for it to lower itself down, allowing Nuna to jump up and reach it, providing a platform to reach the top of the wall and to carry on within the game. It was running along here that my time ran out and I was forced to leave.

On the whole, Never Alone simply looks fantastic. An innovative yet simple idea but with a much deeper story to it than many realise. Never Alone is easily looking to be one of the best new IP's of 2014. With a release on all current-gen consoles, one hell of a unique origin and a planned co-op mode, it's got an awful lot going for it.

PlayStation Plus Free Games for April