Developed and published by Red Storm Entertainment in 1998 for the PC, Tom Clancy’s Rainbow Six was also ported to Mac OS, Nintendo 64, PlayStation, Dreamcast, and Game Boy Color. It was the first videogame to be made with the Tom Clancy’s franchise label, but nowhere near the last.

As with Tom Clancy’s Splinter Cell, Rainbow Six is a game that I had avoided due to wanting to stay away from “realistic” games, and stick with things like Syphon Filter and Metal Gear Solid. By the time I wanted to try it, it was already six games deep, and I really like to play entire game series’. Yes, I’ve played all of the numbered single-player Final Fantasys - though not finished them.

But we’re here for Rainbow Six, which I bought the series of on Steam three years ago (except for the original and the second). Rainbow Six Rogue Spear had to be a physical copy, but Tom Clancy’s Rainbow Six is available on GOG, so during a recent sale I bought it with the sole intention of writing this article series. 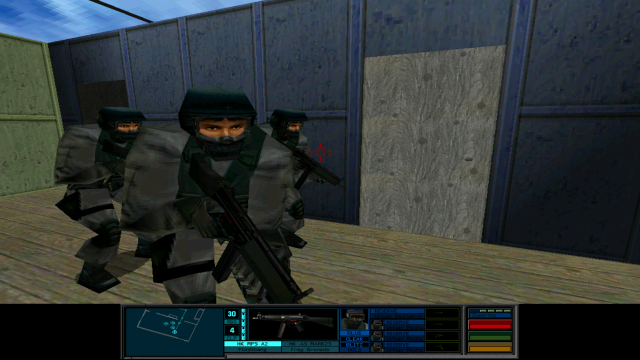 Now, if you own Rainbow Six, you’ll know it’s a hassle to get running properly on modern PCs. I managed to find a GOG forum thread explaining how to use a program called DXWnd to get it running. Why was it so difficult to find? Well, turns out that whenever you Google “Rainbow Six”, it gives you every result for Rainbow Six Siege, then some for the other games. It’s really hard to get a proper search going for the first game…

I soon discovered that there are no mods for Rainbow Six (not this one, at least), so I had to make do with the original graphics. I also made sure to read the entire manual before even getting the game working with DXWnd. The controls were daunting at first, but after taking some time to look at them properly, they made sense.

The final issue was screenshots. GOG Galaxy doesn’t have screenshots working on a ton of games, plus DXWnd probably interfered with it. I tried running DXWnd through Steam, but the Steam overlay doesn’t work through it. Finally, I came to the realisation that Win+Alt+Print Screen will save a local screenshot of your active game window. I tried changing the key combination, but that didn’t work - so you may notice that none of the screenshots in the following parts have any action in them. Now you know why. 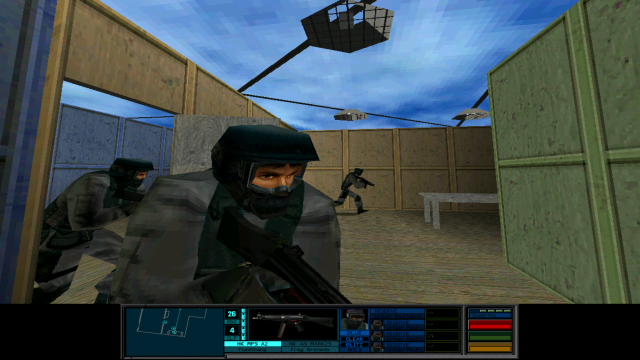 Without further ado, I present Rainbow Six Diaries Part One.

Fresh to the team, I decided to go through all of the training missions, to get a feel for the controls and see what was what. Obstacle courses and firing ranges were fine, though I did manage to kill myself with an underarm throw of a grenade and not enough running away quickly… Then we got into clearing rooms, and hostage rescuing - which is where things got dicey. I had assumed that I could command my squad to go into rooms ahead of me, to limit my danger. The fact is, you can command different squads, but not the individual members of your own. 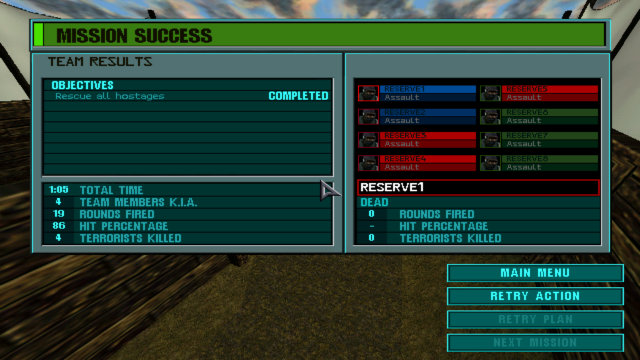 In time, I was happy enough to begin my mission briefing. 1999 was a terrorist’s paradise, if the opening cutscene was to be believed, and RAINBOW was being sent in to sort them all out. Cue Operation Steel Wind.

The terrorist organisation Free Europe had seized control of the Belgian embassy in London. Rainbow Six were being sent in to retake it, and rescue the Ambassador who was hiding on the second floor. The team consisted of eight Assault personnel split into three squads. Green squad were to secure the Ambassador, entering from the second storey, the other two were to clear out the terrorists, each using a different ground floor door.

We broke for the embassy, me controlling Chavez and leading Haider as Blue squad. Upon reaching our entries, I entered the embassy and killed the terrorist I encountered. I signalled for the other two squads to go, and they proceeded to make entry. I received calls from Green squad that the package was secured, and I met up with them as they reached the stairs. Red squad had secured the ground floor, and we headed for the extraction point with the Ambassador. 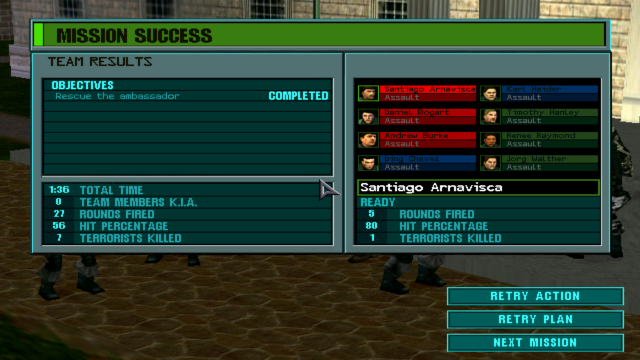 The whole operation took 1:36, and seven terrorists were killed. All three squads were uninjured, and the mission was a success. If every mission was this easy, I could foresee no problems…