From an intense hostage grab from inside a dam, to a bio-lab in Idaho, I was really riding The Phoenix Group - so much that they had escaped with biological samples to an airstrip, and I had very little time to stop them…

Without time to change personnel, I was glad that I had a full complement to work with. The bad news was that they were all fatigued, which would compromise their effectiveness.

I got to planning - there were two hangers to clear, and one outbuilding. Information on terrorist whereabouts was sketchy at best, but I made do with what I had. I set Red squad on an anti-clockwise route, heading right across the airfield to the hanger opposite our deploy point. Meanwhile, Blue squad would hit the closest hanger and the outbuilding. 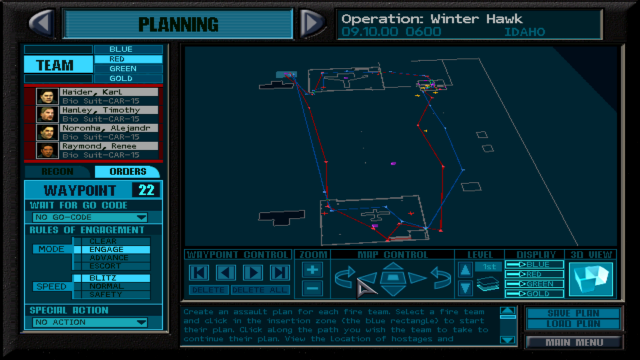 Entering the field, me leading Blue squad as Reserve1 again, and Red squad hoofed it. I rounded the corner and entered the warehouse, shooting the man stood closest to the door. I went around the back of the plane, but was unfortunately shot by the second terrorist. Also, the rest of my squad was murdered by someone - possibly the same guy, but I wasn’t sure.

Switching over to Red squad, I cleared the second hanger, and followed the waypoints I had set out - solo as the others had been shot. I stopped just outside and shot two of the terrorists stood in front of the outbuilding. Unfortunately, whilst I was aiming at the one in the window of the building, I was shot be someone I hadn’t noticed. All seven team members K.I.A. in 1:26, with seven terrorists dead. With faith in the plan, I jumped straight back in. Taking more care this time, I rounded the corner and shot the two men in front of the outbuilding. I then looked across the field, and shot two men running for the plane, one of which was carrying a suitcase. Finally, I went inside the hanger, and shot the first guy, though he winged me in the process. I slowly went around the plane, and shot the second terrorist before he could shoot me, and moved on to the outbuilding.

Hearing the window above smash, and shots ring out, I rushed up the stairs and shot the terrorist raining fire down on Red squad. He died, and the mission was a success. 1:23, and 11 terrorists killed - but unfortunately, Karl Haider had been killed. Alejandro Noronha had been incapacitated, and there were three wounded, but I felt that the mission went quite smoothly. So for once, I decided to go with a less-than 100% success, and call this a win.

Which brought me to Operation: Red Wolf, where terrorists had raided a gathering in Brussels, which was celebrating the first printing of Euros. Our mission was, of course, to rescue the European dignitaries who were being held hostage. As a side note, John Clark explained that we were basically banned from operating inside the USA because of how the Idaho op went down.

We were deploying outside the main entrance of the mint, and it was expected to be heavily guarded. Luckily, the shipping area was going to be lightly guarded! So I set waypoints to make both Blue squad and Red squad hoof it clear around the mint, and up the same staircase. That’s where we would split up, with Blue rescuing the hostages, and Red clearing the route to the front doors. 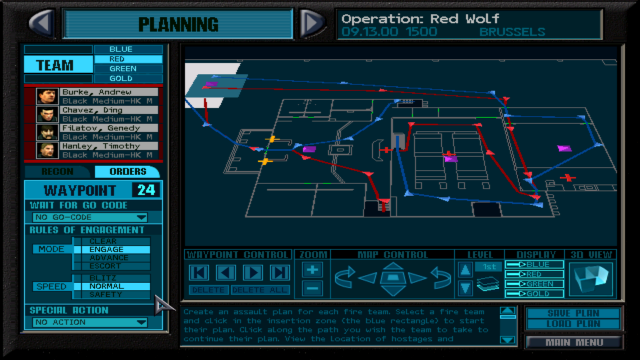 Pretty straightforward, if not simple

All went well until we hit the printing room, where things went south. You know, apart from three members of Red squad getting stuck against a wall. We were all gunned down by one guy, which was embarrassing, in 2:12, after killing three terrorists…

The next attempt went basically the same, minus Red squad getting stuck on a wall, and ended in 1:58 with everyone dead, and four terrorists killed. So, I went back to the plan and redid it, but with Red squad clearing each room as they went, rather than just flaunting through them. Red squad led the way up the stairs, with me on their heels, then we split and I went towards the vault. Entering the vault, I shot the terrorist just as he was turning to shoot a hostage, and went to escort them to safety. However, before I could reach the vault door, the mission ended. Ninte terrorists dead, 1:57 time and no injuries.

My win was tarnished, however, when Operation: Razor Ice began, with the information that Dr Catherine Winston had been kidnapped from her hotel room, and taken to Southampton. She needed rescuing from a boat, and we also needed to find the mole within R.A.I.N.B.O.W…