This is my ongoing exploration of Tom Clancy’s Rainbow Six series, played in release order, where I will chronicle my playthrough like a text-based Let’s Play. This time I finish Tom Clancy's Rainbow Six 3: Raven Shield.

Having finally nailed down that Gospic was up to something, we had been back to Cayman Brac and learnt about a plot to poison Rio…

It had taken two months to find and read the journal of an undercover Interpol agent, as it was the 4th of February 2007 before we knew what Gospic was planning for Rio de Janeiro. Operation: Whisper Blade saw us hitting a garage along the Festas Juninas parade route, which had previously housed a float designed to disperse a chemical agent. Yes, before you ask, Festas Juninas is a festival which takes place throughout June, but was for some reason being celebrated in February this year.

The politician Alvaro Gutierrez was allegedly on site, according to this journal written over two months ago, so we were to grab him whilst murdering every other terrorist in the area. The plan saw two teams clearing different areas of the garage before heading upstairs to capture the target. I liked how the plan showed the show cars

Deploying, Green squad were under fire even before they had reached their go code. So much for the element of surprise… We went in and began clearing the rooms on our way to the storeroom. Taking a moment to take a screenshot, a terrorist blundered his way around the corner right in front of me, so I shot him. We went through a showroom and into some garages, where I was to throw a smoke grenade and call the go code. I did so, but by the time I went forwards and had my rifle out again, I was too late to shoot anyone.

We nipped outside, where I discovered that this place was called O Leão, then went into the next building. Or it might have been the same building, I’m not an architect. Planting a breaching charge, I burst into a room and gunned down some terrorists, and made my way upstairs. There were three terrorists up there who seemed to have absolutely no idea that we were there, until I opened fire on them. When Green squad got into position, we both planted breaching charges on the doors, and I hit the go code. We blew the doors and burst in, and I once more managed to miss the action, as Green squad were closest to Gutierrez… 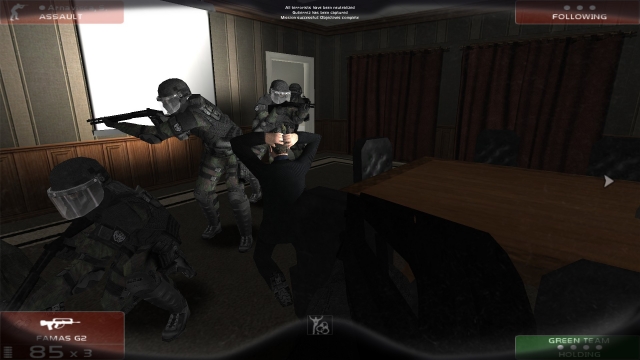 Fine, saved me some paperwork...

The mission was a success in 4:46, with 46 dead terrorists. Five hours later, we had the location of the float, as well as Gospic himself. I was being sent in to neutralise everyone involved, and prevent the bomb from going off, and thus save everyone from being melted from the inside out.

Operation: Steel Rose saw us tracking down Gospic, who was in a side street with his Float of Death™ along with whatever remained of his men. We would have to disarm the bomb, then take everyone out, all without being noticed. Doubtlessly an easy feat for this, the final mission of the campaign. The plan saw two teams go in, with a third taking to a rooftop for some sniper action. We deployed and one of the first things I had to do was throw a smoke grenade. I hadn’t paid that much attention to the plan, so had no idea where I should throw it - so I took a wild guess and chucked it over a fence. With that, I went for the door and inside the first building. We went upstairs, shooting a few men as we went. I continued, and it wasn’t until I was at the furthest point from my team that I realised that they weren’t with me.

Heading back - thankfully as a result of using the waypoints - I discovered that they had gotten confused in a doorway and potentially delayed Gold squad. I shoved them out of the way and continued onwards, heading back downstairs and outside. Green squad and I burst out with a go code, where I shot a terrorist as he started arming the bomb, then disarmed it. 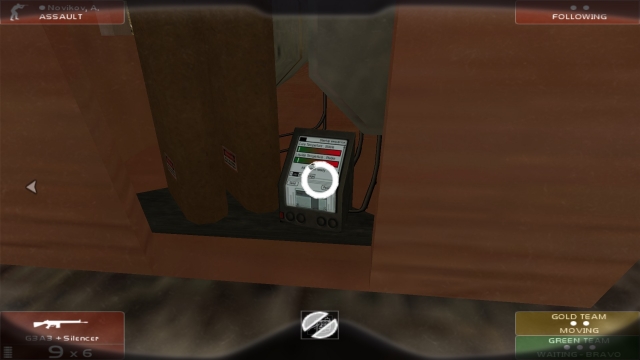 More complex than I honestly expected

With the main threat out of the way, we went through an alleyway and into a hotel - via the bar. I was tempted to have a go at the slot machines, but fought that impulse so that I could continue the mission. We went upstairs and cleared the floor room-by-room - though most of them were empty. Then, we headed upstairs and surprised a man on them, before going up to the roof. Most of the terrorists were dead, but as I followed the waypoints we discovered Gospic. He made a run for it, and before I could pull the trigger a window smashed and he dropped down dead.

Looking down through the broken skylight, I spotted Green squad hanging out and realised that Ding Chavez was leading them. It was no wonder they made that shot. However, the mission wasn’t over. I walked over to the other side of the roof looking for terrorists, and spotted Gold squad on a rooftop. Moments later a shot rang out, and the mission ended. Success in 6:29 with 38 dead terrorists. 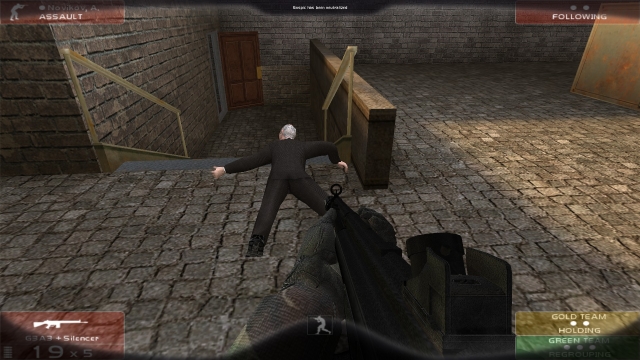 And with that, the day was saved. Gutierrez spilled his guts over what Gospic’s intentions were. Buy some oil fields at a rock bottom price, due to the terrorist attack way back in November for Operation: Stolen Flame, and then take as many people with him before funding an international fascist movement with his wealth. Well, not him as he’d be dead, but still.

Although I really did enjoy Raven Shield, I’ve got to restate my issues with it. First and most glaring, was Kevin Sweeney’s voice. The guy was canonically born and grew up in Birmingham, yet sounded like the cast of the soap opera Emmerdale had been told that they weren’t quite “Yorkshire” enough. Sure, in Rogue Spear he was a cross between American and South African, but at least it wasn’t so damned distracting… 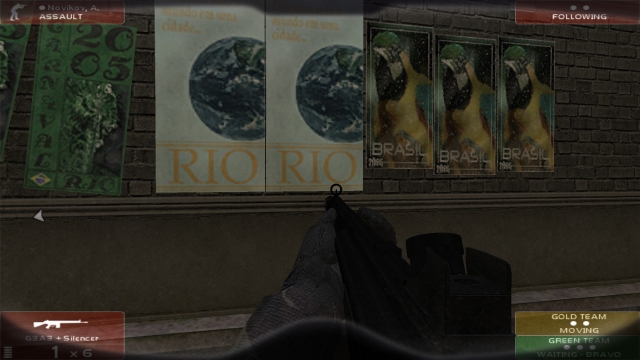 What’s more, I’m not entirely convinced that they tied up the whole Nazi thing from the opening cutscene, but I did really enjoy this entry of the franchise. The final cutscene mentioned something about Gospic being tied up with something from the second World War, and when his mate was arrested he panicked, but it was quite disappointing.

Anyway, the nice big maps, decent graphics, good gunplay and competent AI mean I’m overall happy with the experience. I’ll be sticking with the engine a while longer, as the next time you read this series it will be the Athena Sword expansion.