Despite wishing for no more sneaking missions after that one in Georgia, I was being deployed to Smolensk in Russia for another one…

Operation: Oracle Stone would see me sneaking into Russian Mafia boss Maxim Kutkin’s private spa to plant a phone bug and a camera. It apparently wasn’t well guarded, but I’d been told that before with annoying results - especially as I was to not engage and get out without being seen…

Making a plan for one RAINBOW - Annika Lofquist of course - to go in through the back door, straight upstairs to the phone, then across the spa to the painting. Once both were bugged, I was to go down to the far side door to cut across the courtyard and to the extraction point. Of course, I ensured that I was in light armour, and didn’t have a rifle. A bit of the old "Leg it" strategy

Entering the snowy secluded yard, I went forward towards the open passageway. That was my first mistake, as I was quickly spotted by the lone man who was patrolling. Mission failure in 30 seconds.

Redeploying, I waited for the man to leave before going over to the wrong door and entering the spa. A civilian walked past before I snuck by and made my way to the stairs, and carefully up to the room with the phone. There were no heartbeats, so I knew I was safe until I bugged it and left and walked down the hallway. A guard walked past and I hoped that on his way back he wouldn’t look at me. Thankfully, he didn’t - but the guest behind him did. Mission failure in 2:59.

The next redeployment went the same way, except ended with that guest spotting me, when I left one of the side rooms prematurely. Mission failure in 2:59 - yes, again. 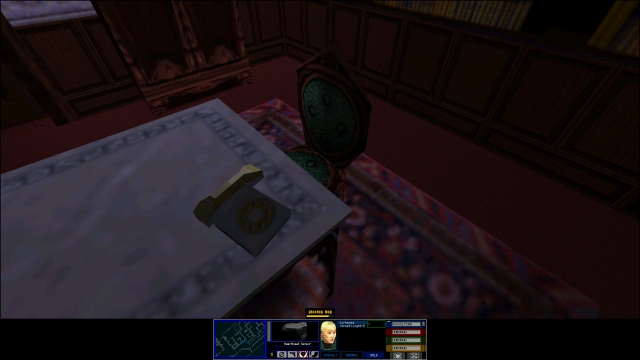 And here's that phone causing me such bother

Knowing the guard and guest movements a little now, I rushed through and honestly got sloppy. Bugged the phone as usual, and couldn’t spot a guard coming from the right - because he was behind me on the left and shot me dead. K.I.A. in 1:39, mission failure…

Making my way through the level again, I managed to avoid the guards this time even after bugging the phone. Heading down to the painting was almost clear sailing (once I’d evaded the guard and guest upstairs), so I planted the camera and left the library which it was in. I almost got spotted by a guard and a couple of guests, but managed to avoid that before exiting the spa. The courtyard was surprisingly devoid of life, apart from the guard who spotted me the first time, but I was soon at the extraction point. Mission success in 3:38, and on to Operation: Temple Gate.

The Antoninum Opera House in Prague had been stormed by terrorists, during a command performance - which meant that the Czech president and some diplomats had been taken hostage. Since the hostages were being held on the stage, the danger was high - they could be shot by any terrorist with a view of the stage. Planning for two teams, I set Blue squad to enter from the rear and get to the hostages, then out through the front with them, making a stop if required to the bathroom to pick up any stray hostage and accompanying terrorist currently en route. Red squad were to enter the front, and storm the place, wiping out the terrorists.

Entering the action, I led Blue squad through the rear door and shot a terrorist just inside the doors. I couldn’t quite work out where my waypoint was, so I went immediately off-book and headed for the stage. Red squad were already working their way through the place, so I didn’t have time to find the staircase I was supposed to be using. I shot two more terrorists behind the curtains before arriving at the hostages - where one was shot, before I was also killed. Mission failure in 1:11, with one hostage dead, two RAINBOWs injured, and two K.I.A. We did take out nine terrorists, though if I’d killed the terrorist on the stage I might have avoided failure…

Redeploying, I once again led Blue squad in through the rear doors and shot the terrorist - but there was a second terrorist! I managed to shoot him too, before heading along a similar route to before. I killed the two terrorists behind the curtains, and made it to the stage - where Red squad had just killed the final terrorist. Job done, I grabbed the hostages, just as another member of my team shot a terrorist who had just arrived back from the bathrooms with my final hostage. 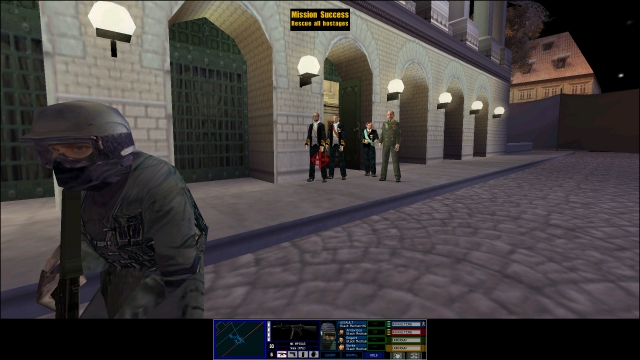 With them all behind me, I headed for the exit - keeping an eye on my heartbeat detector the whole way. We reached the extraction point unmolested, mission success in 2:19, with 14 dead terrorists.

Next up was Operation: Sargasso Fade - a two-part mission, meaning that I had to bring the right people to Siberia…