Having stopped the second of Alvarez Cabrero’s chemical bombs from harming anyone, we were headed over to a penthouse apparently owned by him.

It was Operation: Elements Hotel and Casino, and it was 2137hrs. We had a man on the inside, who had confirmed that the roof was clear. While Sharon was telling us about how the blueprints looked, she was unexpectedly shot! The pilot took us in, and we fast roped down to the roof, looking for the snipers who had shot at us and potentially killed our intel officer. 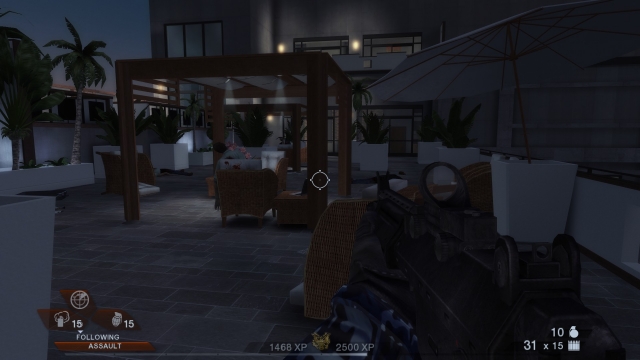 Unfortunately for us, the roof didn’t just house snipers, as some tangos came rushing out through some nearby doors. Our NSA man on the inside contacted us and apologised because the roof had been clear earlier. Heading downstairs, we overheard the snipers boasting about taking down a chopper, presumably they had left the rooftop to go inside after firing at us. There were three of them, so I sent the squad in to shoot them, then sent them downstairs where they shot another tango. Once I joined them, we killed a few more and headed down the hallway to an elevator - which our contact immediately cut the power to.

I was getting the feeling that our NSA contact was working against us, though he claimed it was to slow the tangos down. Going down some stairs, we shot a handful more tangos in a series of adjoining rooms. This multi-floor penthouse must have been expensive because it had more rooms than some government buildings… 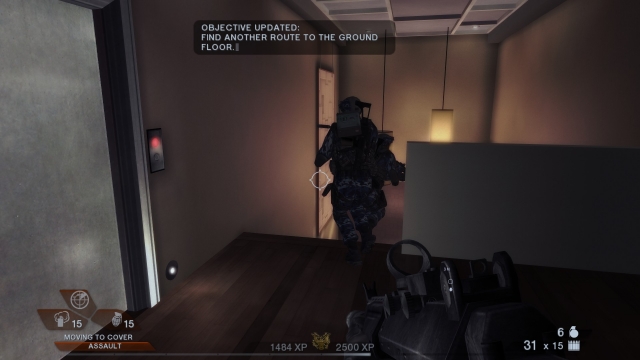 After a helicopter flew past, Echo Team radioed in, saying that they had landed on the roof and were making their way inside. I restocked my ammo, then crouched next to a wall while I checked out the room full of tangos that we had to assault. And assault we did, when one of my squadmates opened fire through the window…

Once the room was clear, we went into another room with a single tango and rappelled down out through the window to the floor below us. I had to send the squad in, as there was one tango pacing the length of the windows back and forth… While we shot the rest of the tangos, Echo Team radioed in. I’ve no idea what they said because the gunfire drowned him out, but it was something that Bishop agreed with. 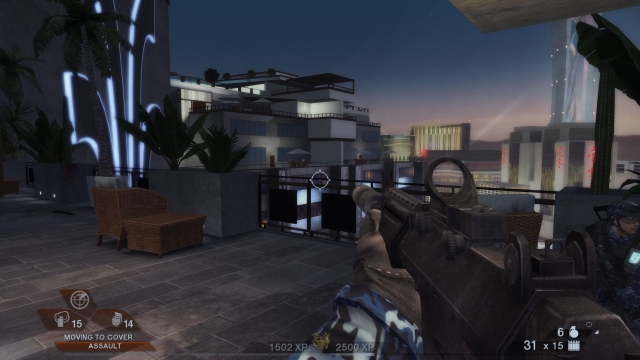 We moved through a series of suites and reached a populated hallway. My snake cam showed three hostiles waiting for us, so I marked two of them and sent in the squad. Clear again, we shot one more tango in a room before rappelling down into the room below. Our NSA “contact” came over the radio to warn of a ‘bit of an oops’ coming our way, and the lights went out. I checked the hallway with the snake cam before telling my squad to standby at the left-hand door, while I went out the right side, pincering the tangos.

Down the hallway, we entered another suite and resupplied before checking under a door with the snake cam. One of the tangos threw a smoke grenade, but we hadn’t opened the door yet and waited for it to dissipate. We went in and shot the tangos, then I checked the next hallway with the snake cam. I sent the squad out through the right-hand door and came out the left-hand one as we got into a firefight. A tango came out of a supply room in front of me, so I shot him and helped clean up the rest of the tangos. 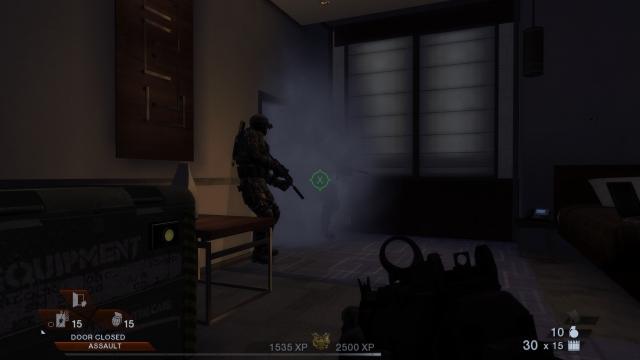 Once the end of the hallway was clear, I told the squad to rappel into the room below through the window, while I went down the elevator shaft. Somehow, I was spotted and tangos began shooting at the shaft below me, so I gave the go order to my squad, and they breached through the windows. Joining them a moment later, we cleared out a few more tangos.

Down the hall, I activated the thermal scan before we breached a room containing tangos, where we resupplied before climbing out through the window. Echo Team radioed in, saying that everything was quiet before the building across from us exploded! The NSA agent contacted us to ask if we had gotten out, before saying that it sounded like there had been an explosion. Bishop snapped at him, but he continued, saying that he was moving to the casino downstairs. 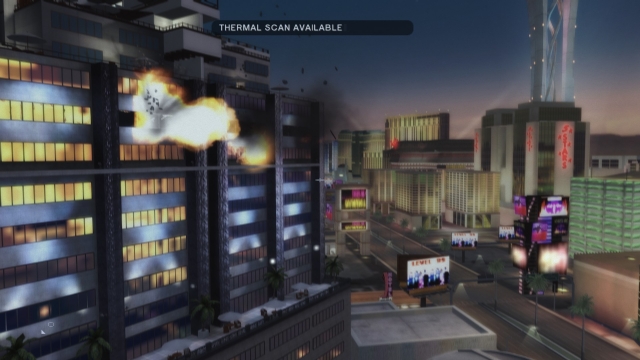 I fast roped down several floors and came under fire. As I shot back, I realised that my squad were still on the balcony above, for some reason having not followed me down. After calling them down, we fought off the tangos and moved through the outdoor bar and towards the next building. A mistimed order made Mike and Jung take cover next to the door, the moment I came under fire through the windows there. I had to kill a handful of tangos by myself when my squad was gunned down before I could revive them and head down an elevator shaft via fast rope.

We were immediately in hostile territory, as two tangos patrolled the hallway ahead of us. There were more tangos around the corner, and a whole bunch entrenched in the outdoors area filled with slot machines. After a big firefight, the NSA agent got in touch again. He was in the Elements theatre, but couldn’t reach the security room. So, he was going to “snoop around” instead of being of any actual use. Actually, that meant he would continue to be just as helpful as he had been so far… 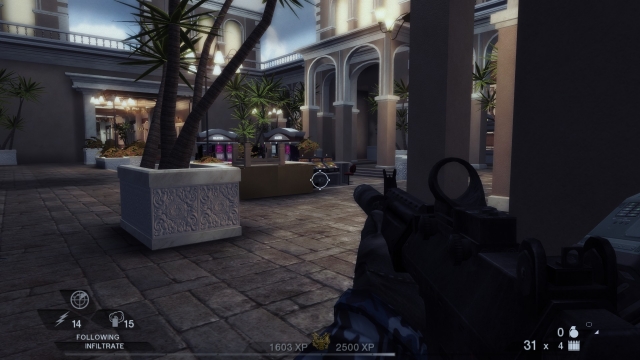 Inside the main casino section, we had a whole load more tangos to contend with, and once they were dead we had even more to fight off in the next hall! Luckily, there were some equipment boxes nearby, so I used them a couple of times to ensure I had enough grenades. That also meant I was able to throw them like confetti, which I enjoyed immensely.

At the far end of the second gambling hall were stairs leading down, overlooking an area with multiple tangos. From the safety of our cover on the high ground, we obliterated them in short order. Through some doors at the bottom were some more equipment boxes, so we resupplied before heading forwards towards gunfire. It was a SWAT squad, and they were under fire by tangos. After helping thin the numbers, the person in charge told us that there were hostages being held in several rooms. They directed us towards the security room on the next floor, warning that there were tangos galore. Moving on, tangos came through the skylights and down some stairs, but we killed them with little issue. Moving upstairs, we killed a bunch more tangos and entered the security room. Since they had a machine gun nest there, I manned it - and not too soon, as tangos began storming our position.

Once the assault was routed, Jung said that the terrorists were setting up something - probably a bomb - in the Chinese theatre, and had hostages on the music stage. We left the security room and went out through a door to the right. After resupplying and going through a door, I checked under the right-hand door with my snake cam, spotting a single tango. It led out onto a lighting gantry above the theatre, and the door to our left led through the technician’s room and to the same gantry.

Telling my squad to come through the right-hand door, I went through the technician’s room. This helped, as the tangos below us began concentrating fire on them and not me, allowing me to snipe a handful before they spotted me. Unfortunately, the bomb had begun to beep when we came out, and it had gotten progressively faster. By the time we had fast roped to the floor, it was almost a continuous tone. Mike managed to disarm it, much to my relief, moments before it went off, and we moved into a supply room to kill some more tangos. At the far end of the room were two doors, so I checked them both with the snake cam after resupplying at some equipment boxes. 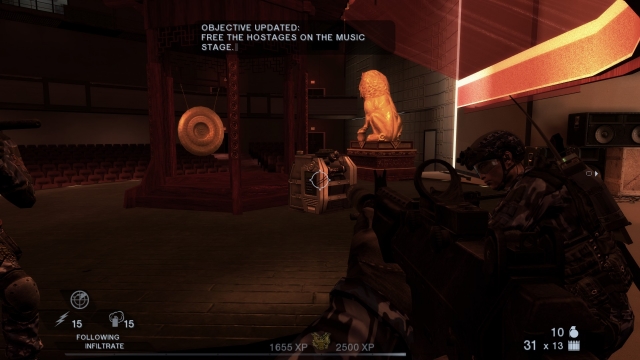 It was a warehouse with some tangos scattered around, so I sent the squad in through the right-hand doors. Or, I would have if I hadn’t pressed the wrong button and sent them in through the left-hand doors, completely ruining my attempt at a pincer attack. It was messy, but we got through it in one piece and into the corridor at the far end. It ended with two doors, both of which exited into the music stage, and multiple tangos were there guarding the hostages. A member of the SWAT team stood talking to one of the terrorists, trying to convince them to let them go.

With my snake cam, I told the squad to fire on the two that I assumed would fire at the hostages first, then set them up at the left-hand door. Taking the right-hand door, I gave the go order and we killed the tangos in seconds. The SWAT member said that he would lead the hostages to safety, and we went for the stage, and I took cover behind a couple of speakers as a hail of bullets came down towards me. After a few long minutes and multiple waves of tangos, and so many flashbangs that hurt my ears, the coast was clear and we moved off through the exits in the rear. Once at the top of the staircases, I checked under the door with my snake cam and found a small handful of tangos guarding the route, but once they were dead we had a clear run to the roof. Or so I thought.

At the top of some stairs, and around the hallway, tangos stormed towards us both inside and outside. However, with relative ease we shot them and were soon on our way through the door at the end, and around the corner. Some more tangos attempted to ambush us, but they were less than nothing. We had a clear run up the stairs to the roof, though one of the upper floors of the building opposite us exploded as we went. 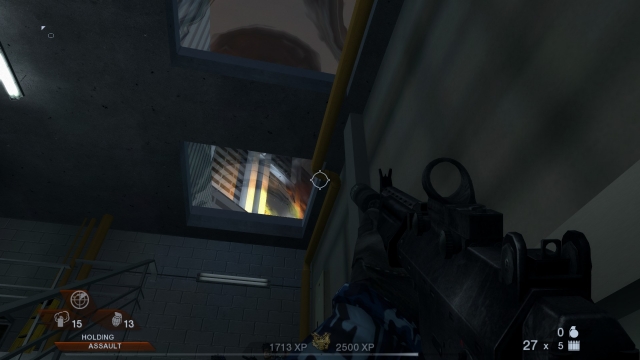 Sending my squad in through the closest door, I went through the door a little higher up to provide overwatch. There was another explosion, but I wasn’t too certain where it came from, and we had a high number of tangos shooting at us. I had managed to get behind some ventilation ducts, and at too steep an angle for the two machine gun nests to get me, so it was another relatively easy conflict.

Ding Chavez AKA Six came over comms to tell me that Sharon was fine, but also about Logan Keller’s squad being kidnapped several hours ago in Mexico. He needed Michael and Jung to replace them when Logan arrived in Las Vegas. I was to head back to base, so I hopped aboard the helicopter - and was joined by our NSA buddy. He had found Alverez, and told Six as much when Bishop called him back. The still-nameless NSA agent convinced Six to let Bishop join him in acting on this intel, and Six readily agreed but said that Bishop was the only support he could send. 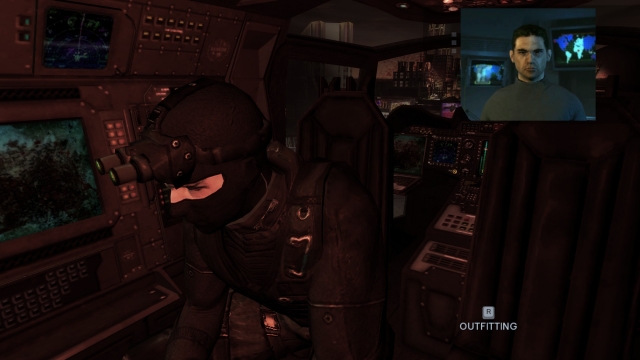 Hopefully, this guy was on the level because otherwise, I would be going solo…