After having helped out a Venezuelan presidential candidate, we were being sent to rescue an informant…

It was the 2nd of December 2007, and we were headed to Dubrovnik, Croatia for Operation: Old City. If this sounded familiar, it was because we had been here in Operation: Jasper Heart. Back then, we had to rescue an arms dealer who wanted to turn informant. This time, we were picking up an informant who claimed to have something juicy. And we weren’t given their name…

Deploying on a parapet near a cannon, I led my team of one around to a slope, shooting the guy I spotted at the bottom. Oh, yeah, I only had Eddie Price with me, for some reason. There were another two as we went, and one in the window to the left. Entering the house where the informant used to be, Eddie commented on how bad it looked, and I couldn’t argue. There was another man inside the house who we shot, and continued along our way.

Out into the street, we wove through several houses fighting a, frankly, incredible amount of terrorists and taking damage as we went. Coming across a closed door - because up to now the doorways had been doorless - I told Eddie to flash and clear. He threw out the flashbang, it went off and he stepped out, being immediately gunned down. Ducking my head out, I realised that he had been shot in the back. As we had passed a blocked street, I decided to go back through the house and shoot them from the other end. This worked very well, as they had kept their eyes on where I should have been attacking from. Passing back over Eddie’s incapacitated body, I was shot at by a man in a window.

After shooting him, I went up some stairs and into the building he was in. Then, annoyingly, had to go downstairs. That completed the first part of the mission, however I didn’t quite like how Eddie had died before the halfway point, leaving me without a team. I also didn’t understand why there were only two of us in the first place… But, I decided to restart the mission.

Things went better than before, because I decided to use my grenade launcher, and knew where the enemy would be appearing from. We got through to the second part of the mission with damage, but still with two of us. 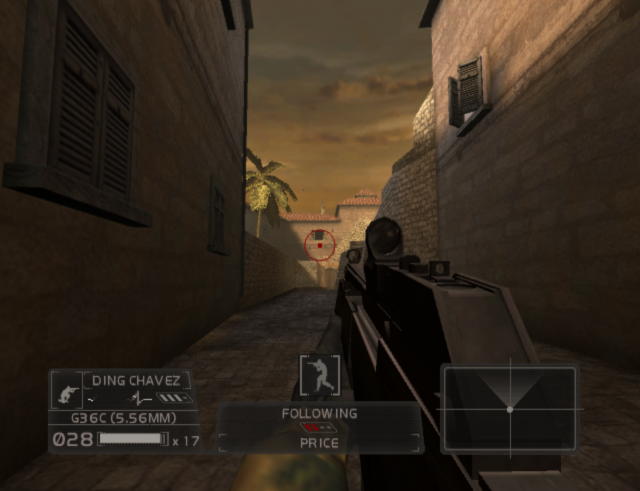 Carefully, we headed down an alleyway, shooting the couple of men who popped out to greet us. We passed a broken metal panel fence, which allowed us to shoot another couple of terrorists, before Eddie started firing at a guy on a roof. I didn’t have time to help him, unfortunately, as I was clearing up the grounds of this courtyard. An RPG blew up a harmless truck, and I shot the guy who came running along after it. 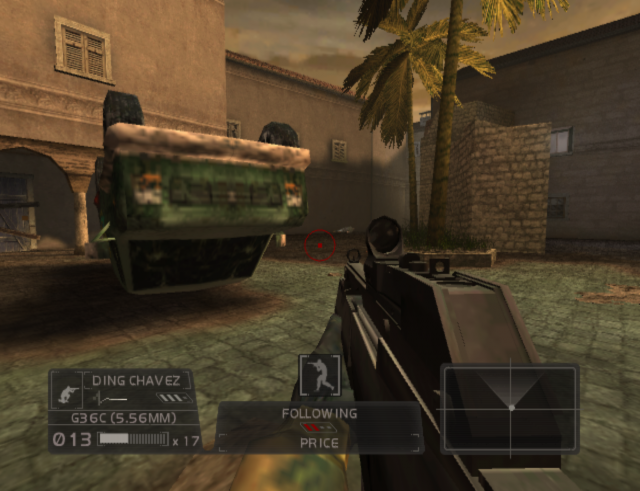 I wonder if insurance covers RPGs

Heading down a street, a church bell began clanging as I shot a guy. We entered a building and while I was deciding whether to go left or right, Eddie shot someone to the right. I went that way, and John Clark got in touch, telling me that the hostage was on the top floor of this building. What a stroke of luck…

Not wanting Eddie to die, and having more health than him, I carefully cleared each area as I went, before summoning him to join me. It was no doubt emasculating for him, but sod it. Through an indoor courtyard, and into a very rundown portion of the building, I shot half a dozen terrorists. Another three fell, and I headed for a staircase, but the ceiling almost fell on me! That was because there was a terrorist up there, easily killed through the hole he made.

Upstairs were two men beneath another hole, who died before they knew I was there. Then, it was just out into the hallway to kill another terrorist before we were at the final room. As there was an opening to the right, I decided to have a look before I stormed in. I also brought Eddie along, just in case. As luck would have it, there was a second door.

Without thinking a moment, I opened it and immediately came under fire from one of the two guards. I shot one of them, then the other while taking a barrage of bullets, but I survived it. After ordering Eddie to cuff the hostage, we were done. Mission success, with 47 dead terrorists. After the debriefing, I finally discovered why I only had one squadmate. 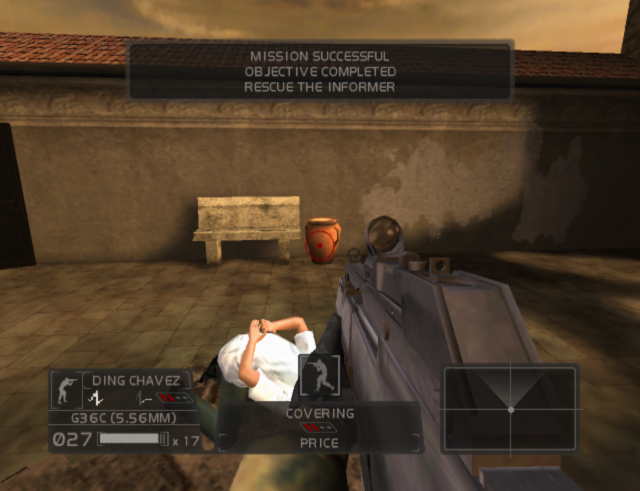 The other two had been sent on a recon mission, which had apparently gone sideways. Operation: Trieste had us going, well, to Trieste in Italy. Despite their mission running concurrently with ours, we waited until 22nd February 2008 to actually go and help them out, as Clark had literally just lost contact with them after their check-in “a few minutes ago”. That’s a 16 hour bus trip, I looked it up. We could have sailed around the world twice in the 80 days since our last mission. 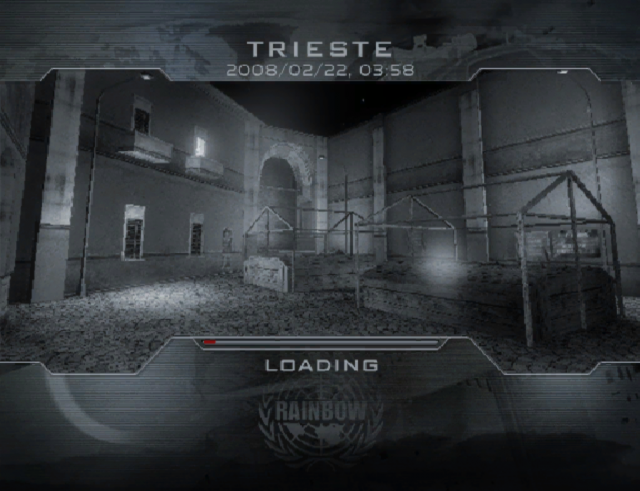 Anyway, we deployed in a street, and I carefully moved forwards, checking down an alleyway and shooting the guy who was there. Around the corner, I was almost shot by someone hiding behind a barricade, so we shot him and a guy through a ground floor window. Unfortunately, there was a guy behind me in an upstairs window. Eddie shot him, but I had taken damage. We followed the street, and I foolishly believed that there was nobody hidden behind another barricade, getting shot by three men.

We cleared the area and carried on, with me now close to death. Sure enough, peeking around a corner into a warehouse, I was quickly shot dead. So, we had to redeploy with different equipment - the aiming ring on the M60E4 was far too small, I needed the M16A2. 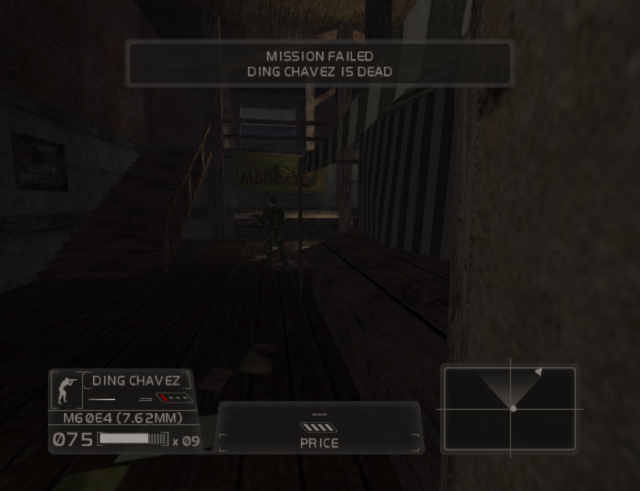 Redeploying with the correct rifle, and some flashbangs, I led the way, once more killing the guy down the alleyway. We went down there after him, and I heard the telltale sound of a grenade landing. After it exploded, I shot the guy who threw it, and the man behind the blockade. Quickly rushing across the street, I shot at the guy through the ground floor window while the upstairs one emptied his magazine into an empty street.

After ducking out to shoot him, we continued on. After a quick flashbang down the next alley, we went out and murderized the handful of terrorists. It had been relatively smooth sailing until now, so I approached the warehouse cautiously, shooting two people before being shot by a third hidden behind some wood. We killed him, then went upstairs where someone threw a grenade.

It went off and we rushed out, shooting the men on the roofs, as well as on the - well, it was also a roof that we were standing upon. Some of the terrorists just happened to be on higher roofs… Entering a doorway, we shot another man before checking the door to the left. That was where the guys had been, but they had gone - and left a hole in the wall. 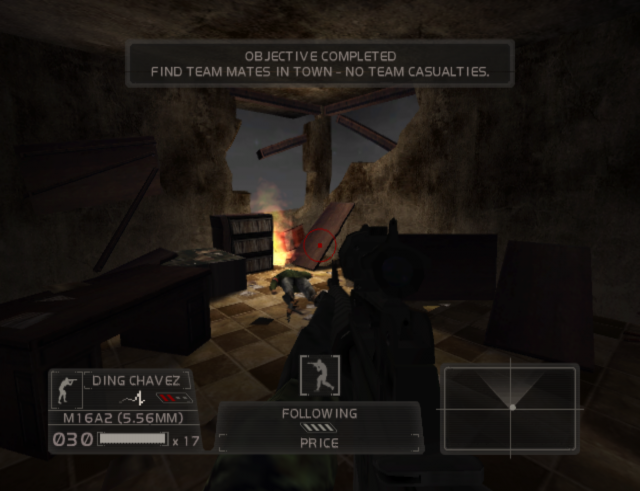 Judging by the lots of scorch marks & lack of rubble, they caused this

We headed out of the building through another door, and gunfire erupted closeby. Keeping absolutely calm by freaking out, I was soon down to a tiny sliver of health, as we headed downstairs. Not all of the gunfire had been towards us, we were heading for my other squadmates!

Going downstairs, I shot a couple of terrorists before we reached where the other guys were. Admittedly, as I was wearing heat vision goggles I almost shot Dieter, but we cleared up the remaining enemies and joined them. Mission success with 29 dead terrorists.

How did we get out of there, as the other two couldn’t do it on their own and we were still actively under fire? Well, to answer that we’d need to go back to 20th December 2007 apparently...