One breaking and entering, and one kidnapping under my belt, I was having to be stingy with my teams, as R.A.I.N.B.O.W. were being spread thin trying to stop a bio-attack…

After having investigated Anne Lang, we knew that she was pretending to be being held hostage, so that she could go into hiding before the attack at the Sydney games. As such, we had to go in and “rescue” her from the terrorists. Since she was pretty close to our entry point, I figured a quick circuit would be best - and ignore the other building swarming with terrorists. 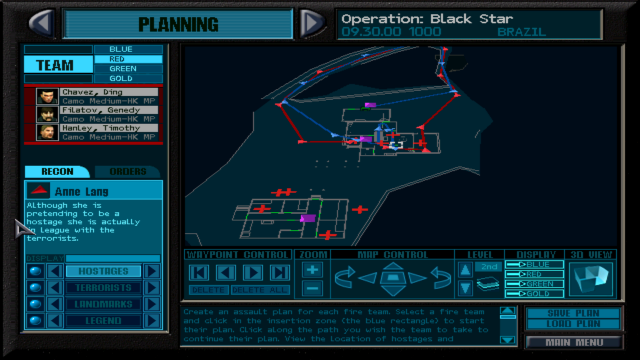 Deploying with Reserve1 heading up Blue squad, I had Red squad sweep the building ahead of us - but mistakenly going the wrong way, I led the other member of my team the same route as Red squad. We killed four terrorists from the other building - which was closer than it appeared on the map - but I was shot before we could enter Lang’s building.

Taking control of Andrew Burke, I shot another terrorist, but was killed before I could acquire the hostage. By this point, Red squad (who had done a very poor job of securing the building) were at the extraction point, so I took them back up the rope ladder to grab Lang - where they were quickly all killed. Mission failure in 3:03, nine terrorists killed, all five of my operatives killed or incapacitated. 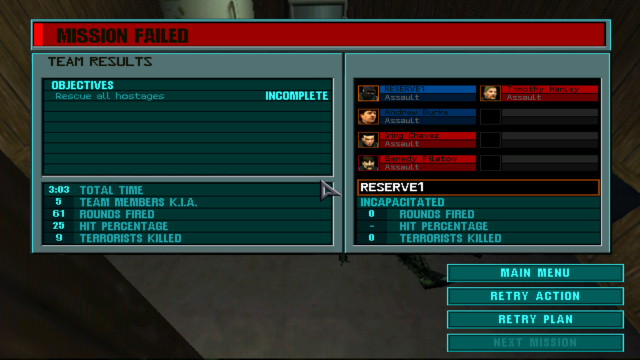 Back into the action, I went the correct way and shot a few terrorists, though I also smashed a window. It must have alerted the terrorists in the next room, where Lang was being held. One of the terrorists turned and shot her, failing us in 1:20, with eight terrorists killed.

Redeploying - because the action was solid - I hurried behind Red squad and we bum-rushed the building, mowing down the terrorists and escaping with Lang. I returned with her to the extraction point, completing the mission in 2:05, with eight terrorists killed.

Returning her to England, we were told about Operation: Wild Arrow. The Sydney games were on, and the virus bombs were already in place. They were set to go off in the athletes’ village in the closing ceremony, and had to be deactivated simultaneously. That meant that I would have to do something I had never done before - swap squads voluntarily. I knew how to make the other squads escort hostages, but had no idea how to make them disable a bomb - and do so at the same time as me. I would only have 30 seconds to do it, so it would be dicey.

Oh, also I had a briefing from Anne Lang which boiled down to “she’s getting put in an asylum”, then went through planning. I quickly came to the realisation that - I’m on easy mode, so I only had one bomb to defuse. However, I sent Blue squad to the bomb, up through the north entrance, and sent Red squad up to the security console, where they were to hold position until I told them to move, where they could then head back to the extraction zone. I had no idea if we even had to extract, I was just being thorough. 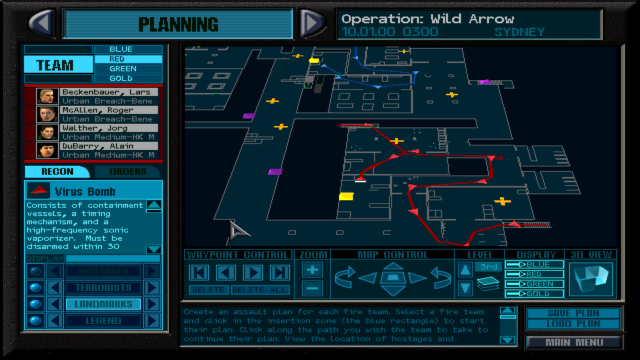 Maybe I could avoid the guards?

Heading up Blue squad, I followed my markers and shot a couple of guards as I went, getting winged myself in the process. Along the way, Red squad said that they were in position, so I switched over to them. Since there was only one bomb, I could deactivate the security console and then get to the bomb in a moment - so I did just that.

However, swapping back to Blue, I shot a couple more guards and went in to deactivate the bomb - but the mission ended in failure. 1:52, four dead “terrorists” (they may have been?), one wounded R.A.I.N.B.O.W. - but still a failure. I figured that I had to deactivate the security and then the bomb within 30 seconds, or that an alarm had been pulled. Either way, I went back in. 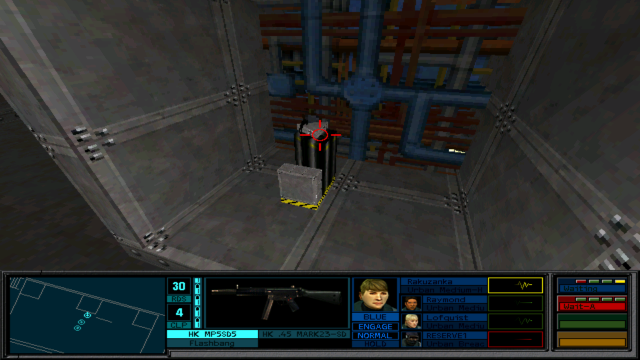 Not the fiercest looking bomb

Having already forgotten about the guards in the sewers, I was shot and killed, and one of the other specialists were wounded on Blue squad’s way to the bomb. Red squad reported that they were in position as I was clearing the area around the bomb, and went to it before switching to Lars Beckenbauer in Red squad. After deactivating the security system, I quickly swapped back to Blue squad and disarmed the bomb. Operation completed in 2:06, with seven “terrorists” killed and one operative KIA.

As I returned to R.A.I.N.B.O.W., I was told that it was time to end this whole affair with Operation: Mystic Tiger. John Brightling and what remained of Phoenix Group had locked themselves in the Horizon Ark in Brazil. I was to avoid unnecessary bloodshed by letting people surrender, and capture Brightling.

The planning seemed pretty straightforward, with multiple entry points. I had two full squads; Blue entering from the West and moving South to East, then upstairs to Brightling. Red squad were under orders to move South To East, and up through a different route. It was a big map

Things were going smoothly as both squads made their way past their waypoints. Until Red squad were wiped out by someone, which was where things went downhill. Soon after, I was shot from behind by someone hidden next to a door, but my teammates continued without me. I took over and shot a couple of terrorists from long-range when we had gone upstairs, but was soon killed again, and one of the others were injured before they could kill the shooter.

Taking over once again, we were closing in on Brightling’s stronghold, but a couple of poor decisions resulted in failure. At 3:29, with 15 terrorists killed, seven KIA operatives, and one incapacitated… 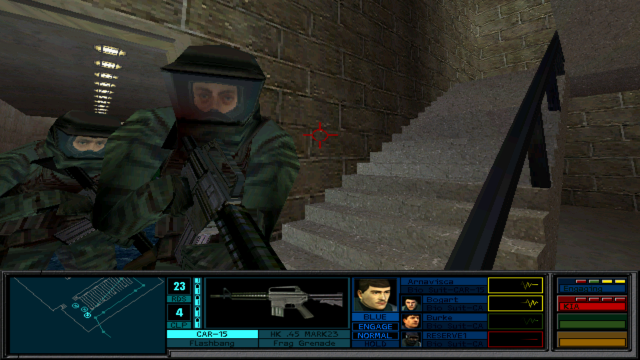 Oh, and we had to wear biohazard suits

Deciding to be a bit more careful - though I couldn’t account for Red squad - I followed around the waypoints again. The terrorists were in different places, but I was ready for the one behind the door this time. Up some stairs, I shot a couple more, and through some doors to a series of ramps. Having already heard from Red squad that they were awaiting orders, before I went down one level to where Brightling was. Through some more doors, I reached the inner sanctum - mission complete.

The final cutscene featured Brightling rambling that he wanted to genocide humanity to leave the world pristine for the animals and plants, to avoid the slow decline of the entire planet. But now that he was captured, it was time to move on to other things - after all, there were going to be more terrorist plots to spoil… I honestly didn’t quite know what I was getting myself in for with this. I knew it was more tactical, but I didn’t realise how tactical - with all of the planning, waypoints, go codes… I assumed that I would be able to tinker with plans and that was it. This game is intricate.

Although not all of my decisions were the right ones, and I lost people left and right - but I always got there in the end. You know, apart from losing a Reserve1 or two, and Karl Haider… Although I didn’t pick anyone based on their stats, and just willy-nilly, I still felt bad that I couldn’t retry again and save Karl. The fact that he was on the list for the remaining missions, red and unselectable, really did put a damper on things. And rightly so.

So, look forward to the next diary - Tom Clancy’s Rainbow Six: Rogue Spear!