This is my ongoing exploration of Tom Clancy’s Rainbow Six series, played in release order, where I will chronicle my playthrough like a text-based Let’s Play. This time I finish Tom Clancy's Rainbow Six 3: Athena Sword Diaries.

We were closing in on the final parts of Gospic’s conspirators, with our next mission taking us to Italy…

Operation: Jagged Silver had us heading for Palermo on 4th of August 2007. Terrorists were infiltrating the facility that we had taken from them in Operation: Jasper Heart. According to John Clark, we were already inside the facility as intel had warned us this was coming, but he also said that he was sending us in to stop the terrorists who had already infiltrated. Why were the weapons still here after over a month? RAINBOW had been having trouble getting an accurate count, as they were spread all over the place, and nobody considered going room-to-room. They had to wait to find paperwork related to everything, because these terrorists were very bureaucratic like that. In and out and up and down

The good news was that we knew some timers had already been set, giving us about 13 minutes to go in, kill everyone and defuse all of the bombs. No, it wasn’t very good news… We deployed in three teams, each with our own bombs to defuse. Leading the way straight ahead I could hear bullets being fired, but heard suspiciously few voices. Taking out a couple of terrorists ourselves as we banked left around some fencing, I told my men to defuse a bomb and resumed following the waypoints. Not the most terrifying looking bomb

Figuring that they would catch up, I continued around some more fencing and right around a warehouse. I didn’t encounter any resistance until I went to go inside the warehouse, where I had a few terrorists to shoot. Then I noticed that my men were still at the previous bomb, having defused it and stayed there. After some light swearing, I told them to defuse the second bomb I’d located, then carried on having done fine so far by myself.

My route took me outside to the right, where I ascended some stairs and made my way into an office above where I had left my men. I shot a few terrorists, then began to disarm the bomb in said office, just before my men downstairs finished disarming theirs. Once it was done, two terrorists had snuck into the office behind me, so I had to shoot them before my men arrived. Then we waited for Gold squad to come in and go over to the bomb, because that was my final waypoint.

It turned out that Gold squad were the ones who should have disarmed it, but I was just too fast for them. And a lot faster than Green squad, who were lagging behind badly. Time was running out, so I went back downstairs, and to the basement level. Two members of Green squad were shot, which definitely made me worry as I realised that I had no idea how to get to where they were and provide backup. As I flapped around trying to work it out on the map, Green squad reached the target and disarmed the final bomb. 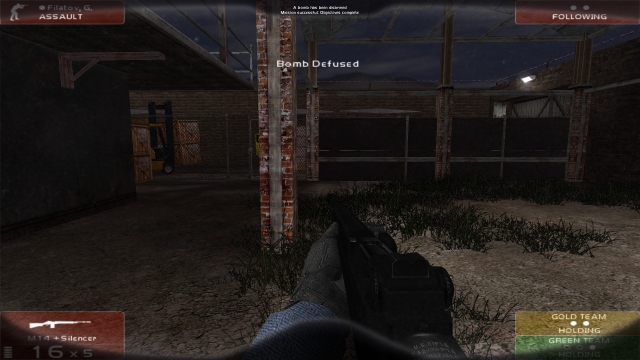 Mission success in 7:36, with 43 dead terrorists, one incapacitated RAINBOW and one KIA. This time it was Karl Haider, who had previously died a few games ago in Operation: Winter Hawk. As this was his second death, I wasn’t too fussed, so accepted the result, which led us to Operation: Athena Sword, taking place on 11th August 2007.

Terrorists had smuggled a chemical weapon into the Agora marketplace in Athens, Greece. Usually the naming conventions for operations were a touch more subtle than this, but there you go. The terrorists were threatening to set off the sarin gas if we didn’t… well, they didn’t actually want anything, so it was weird that they didn’t just set the damn thing off anyway. They were going to set it off if they knew we were there, or presumably if they worked out that the Greek authorities were just wasting their time. According to Kevin Sweeney, these people just wanted everyone dead. So, again, why hadn’t they set it off? This is literally most of the plan

We deployed into three squads, with Gold taking up sniper positions somewhere up above, but with multiple Charlie go-codes. This will come into play later. Green squad and my Red squad only shared a short time together, before they went up a ladder and I headed through a marketplace with two hostages and three terrorists. After I got shot in the face, that is… Now a man down, I headed through multiple Alpha go-codes which were only relevant to me, because nobody else had been assigned them.

In a communal area with some decorative columns, we shot a couple more men while I tried to keep an ear out to tell the other squads when to move. Going through a building I reached the main area where I needed all three teams to converge. There was a Charlie go-code for that explicit purpose, so that we could all reach the bomb at the same time. Someone spooked the terrorists, and the bomb went off. Mission failure in 3:01, with 19 terrorists dead. I failed this mission six more times. 2:57, 3:57, 3:57 again, 2:44, 3:49 and 3:18. The bomb went off in every one except for the 3:49, where a hostage was killed, and with between 18 & 21 terrorists dead. Oh, and a variable amount of RAINBOWs incapacitated or dead. More than one of these was down to me misjudging which Charlie go-code Gold squad were on, sending them in before Green squad was even close to being in position…

Redeploying and losing my temper, I went through the motions. The market, the communal area, the go-codes… At one point before the columns I heard a member of Green squad get shot. I reached the final Alpha go-code where I would always wait for the others to get ready, and watched the map. Green squad were behind schedule, and apparently climbing a ladder. And had been for about 20 seconds now. My theory was that the shot operative was preventing them from using the ladder, so clearly I wasn’t going to receive any help. 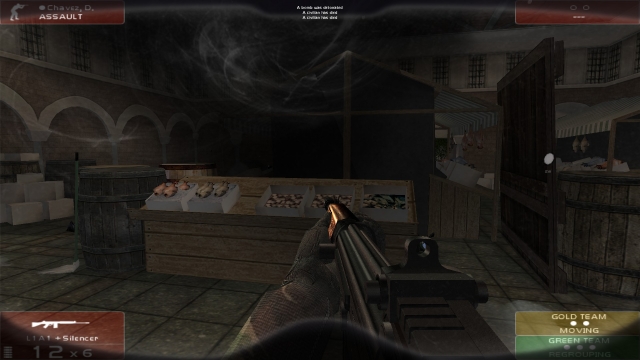 Could I avoid seeing this scene AGAIN?

So, I stormed in and shot the terrorist who, by now I knew, usually activated the bomb. I then shot anyone with a line of sight to the hostages, and somehow all three of us survived without killing a hostage ourselves! After a quick sweep of the room I disarmed the bomb. Mission success in 3:37, with 16 terrorists dead and Jorg Walther of Green squad incapacitated.

With all of the missions complete, I was treated to a cutscene of Alvaro Gutierrez in prison, where he’d been since the events of the main game. He received a newspaper telling how some terrorist plot was foiled in Athens. There was a note stuck on the back saying “It’s over -Clark”. Two days later, and the morning cell check was in progress. Gutierrez - the only prisoner, as it turned out - was found having hanged himself.

The first of the two expansions done with, I’ve really enjoyed digging back into the franchise after a bit of a break. The plans were better in this one, and I don’t recall the use of Milestone points, though I’ll have to admit I’m not entirely certain what the point of them was. 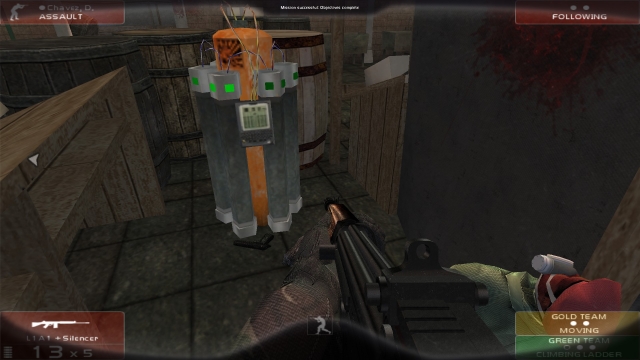 At least there was at least one good looking bomb

The missions in Athena Sword were pretty good with some variety despite there being only six maps across these eight missions. Some things don’t make sense, like using the hotel as a safehouse, and the weird issues the developer had communicating what exactly the time was. At least they didn’t have a summer festival happen in the middle of winter.

My biggest issue is actually the ending. Gutierrez had been mentioned a few times, as being not particularly open to discussing the group’s plans. We captured him near the end of the main game, having been using Nikola Gospic’s group to further his fascist political aspirations.

John Clark sending that newspaper caused Gutierrez to hang himself. Clark’s desire to brag directly caused a man to commit suicide. Yes, he was a bad man who wanted to kill people in nasty ways, but we had captured him. He was supposed to face justice, and if Clark had gone and spoken to him instead of trying to play it “cool” he would have done. I could understand the weird writing in the briefings now and then, but this ending just seemed to be in poor taste. On a positive note, the written text does appear to be about this whole caper, not placeholder