This is my ongoing exploration of Tom Clancy’s Rainbow Six series, played in release order, where I will chronicle my playthrough like a text-based Let’s Play. This time I finish Tom Clancy's Rainbow Six 3 on the GameCube.

Having found the president’s fall guy, Vargas had told us everything, including that there was a VX nerve gas bomb about to go off at Mardis Gras…

Operation: Parade started close to midnight on 4th February 2008. We were deployed into an alley, and after a short walk were confronted by enemy forces. There were several hanging around near a door, two on rooftops, and one hiding back a ways that I didn’t suffer to live. We went upstairs and killed a few more, before heading back down another set of stairs and on to the next part of the mission. 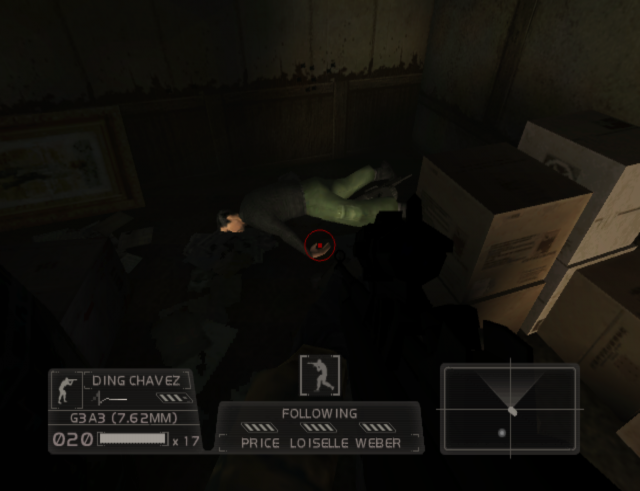 So this is what happened to the main character from GTA III...

Worth noting was that the time stamp when we began the mission was 23:38, but now it was 23:50. If the attack was happening at midnight, we were running out of time more swiftly than I had realised.

The float was right in front of us as we left the alleyway, with a giant statue of the Grim Reaper on it. We checked the alleyway to the side and found a lone terrorist, but the area was quiet. Until we approached the bomb. Keeping our back to the wall opposite the hotel, we managed to take down all of the terrorists with very little damage to ourselves. Ordering my men to disarm the bomb, I kept watch. 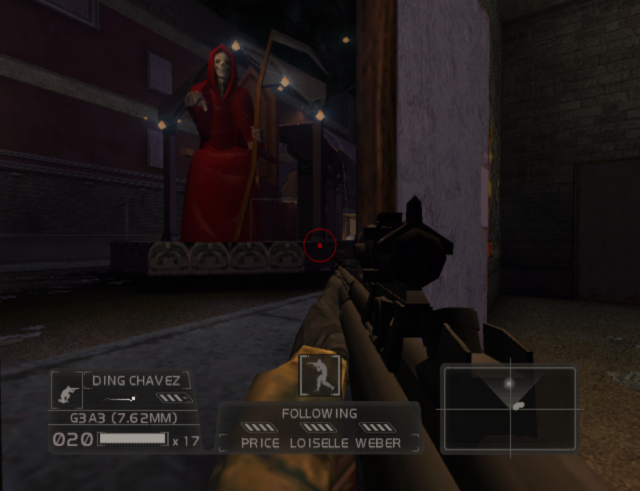 "Remember where we parked"

Then a timer started counting down from four minutes. There was a failsafe, meaning that it was disarmed from a remote trigger, but there was something locally set up to make it go off after a delay. John Clark ordered me to leave the team and go find what was controlling the failsafe. Obviously, it was to do with the back door down the alleyway where we had found a lone guard, so I went for it.

Of course, bullets started flying at me, accompanied by a couple of grenades, as I went through the ground floor. Heading up some stairs, losing time and health, I was informed that the device was probably on the third floor. Unhelpfully, the stairs to the next floor were blocked, so I had to find another way. I was shot dead as I entered a large room, failing the mission with 34 terrorists dead.

There was a checkpoint before the stairs, so I redeployed. Instead of heading left, I went right - and got shot in the back. I shot the man in front of me before turning around to kill the other one, then headed up the stairs at the back of the floor. At the top, someone burst through a door and rolled, allowing me to shoot them. At the end of the corridor was a large area with a big skylight, a couple of sofas, and several bogies. I killed them all, running the timer down all the while, before heading through to a door at the back. 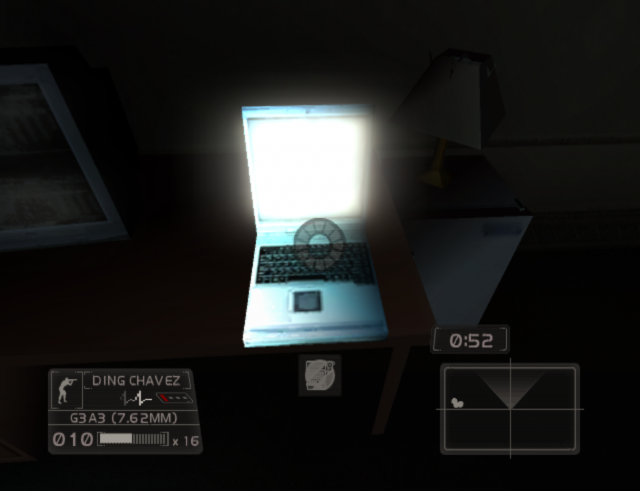 My kid has her brightness up this high, just wasting the battery...

Inside was a lone man and a computer. I quickly hacked it, with under a minute to go, and managed it. Mission successful with 41 terrorists dead. But it was worth it, as the President of the United States gave a press conference and vaguely thanked some people who stopped a terror attack.

Now we could set our sights on President Crespo. Despite being a foreign dignitary, he had been disavowed. By whom, I’ve no idea, because Operation: Airport was taking place in Caracas, on 12th February 2008. For some reason, Clark was sending me in solo to plant some explosives on VX containers, and take out Crespo. I don't think "plant bomb" fits under the umbrella of "recon"...

Going through the door to the left, I went up some stairs. There was a shadow at the top, so I waited for him to start walking, and followed him. He closed the door behind him, and I waited to hear what I could, and he opened a second door. Taking the chance to open the door, he walked out through the second, and I hurried across the room to a third door.

It led outside, and I could see someone patrolling around the vehicles - one of which I had to plant the bomb in. I waited to see what he was doing, before dropping down and going to the van. I quickly planted the bomb, just as the guard arrived behind me. Clark congratulated me on completing this insurance policy, then told me those two magic words: weapons free. After shooting him in the face, I hurried off to the right, having come from the left, and back inside the building, on to the next part of the mission.

I almost immediately went back outside and shot some men in front of the hanger, who were hurrying to kill me. Then, I headed back inside.

Clark told me that Crespo was here, and that I was to drive him and his men towards the plane. Rather than use the bomb as an insurance policy, as he had told me and kept referring to the bomb as, he wanted Crespo airborne. Ever the dutiful soldier, I pressed onwards through several areas, exploding barrels and shooting people in the face. For once, this was NOT me

Back outside, Crespo was already aboard his plane and it began to taxi. I chased after him, but a tanker blocked the way. Someone shot at me from a roof, so I killed him while Clark congratulated me on a job well done.

Mission success with 28 terrorists dead. And then the cutscene, which showed the jet in the air, and RAINBOW on the ground below. Casually, Ding opened up a case and pressed a button. Crespo’s plane exploded, finishing this campaign. 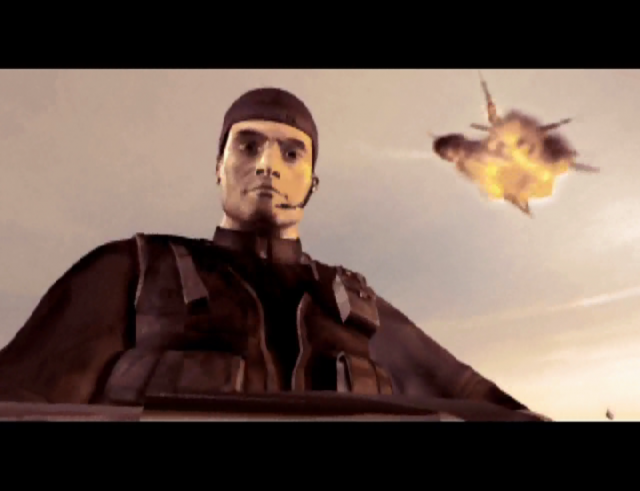 Ding is cool, so doesn't look at explosions

I quite enjoyed this more than I thought that I would. Yes, its levels are consolified, each being split in two, and checkpoints every so often, and there’s no planning stage… But it’s an enjoyable experience. Also, you’ve read this far, you’re well aware that I make horrible plans.

Of course, never getting a resolution on why this version of the game puts the wrong date on the Trieste level still bugs me. I’ve had a look, and as far as I can tell the Xbox version has the mission in a different place, and with a much more sensible date.

I’m impressed by the quality of the graphics, which I thought would be poor since I was dropping from modded, new graphics to the GameCube, but I quite liked them. Of course, the cutscenes were a different matter, with their Thunderbirds-esque style of faces…

Look into his cold, dead eyes

Obviously, the game has a ton of similarities to Raven Shield, but that’s to be expected. At least they didn’t say a June festival happened in February, they had it be Mardis Gras. And yes, I looked it up, Mardis Gras did actually happen on 5th of February 2008.

I’m a bit curious about the final mission, though. Clark states that the bomb was an insurance policy in case Ding couldn’t assassinate Crespo. But as soon as Ding can reasonably get a shot off at the president, Clark tells him to just make Crespo get on the jet. Why call it an insurance policy when that’s the main plan? And what if Ding immediately opening fire makes them rush and not load up the plane with the bomb?

Anyway, this is definitely worth a look, and join me next time for the final “third” game: Tom Clancy’s Rainbow Six 3: Black Arrow.