Released in June 2007, some months after the Xbox 360 and PC versions, Rainbow Six Vegas for the PSP received mixed reviews. It was released alongside the PlayStation 3 version, but there’s no functionality between them - you know, like some Game Boy Advance games had with their GameCube counterparts.

The story is actually designed to complement its big sibling, telling the story of another Rainbow team in Nevada on the same day that Irena Morales attacked Las Vegas. How well it does that, just read along to find out…

This is my ongoing exploration of Tom Clancy’s Rainbow Six series, played in release order, where I will chronicle my playthrough like a text-based Let’s Play. This time I start Tom Clancy's Rainbow Six: Vegas on the PSP.

Terrorists were attacking Las Vegas on the 2nd of July 2010, but some other Rainbow team was on that already - two of our colleagues were missing: Kan Akahashi and Gabriel Nowak. They had been kidnapped by Irena Morales around an hour ago. It was 2200hrs and Operation: Ranch was a go. 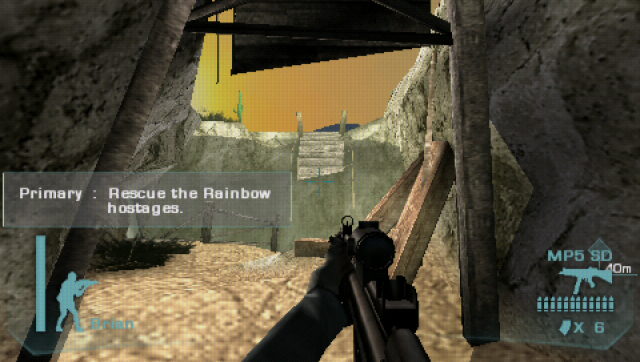 Brian Armstrong and Shawn Rivers boarded a helicopter, joined by Joanna Torres (who should have been with Logan Keller at that precise moment?). We were on our way to a ranch owned by Morales, which was apparently the most obvious place for the hostages to be. We didn’t then know that she was on her way to Nevada from San Joshua del Mosquiera, but hey-ho.

As Brian, I infiltrated some tunnels, killing a few tangos as I went, until I reached a ladder up to the gardens. Shawn had made his way onto the villa grounds from another route, and I took control of him to clear the gardens. This involved using a PSG-1 sniper rifle, so it was worrying that it only told me how to use the scope after I had had to work it out for myself to kill two tangos. 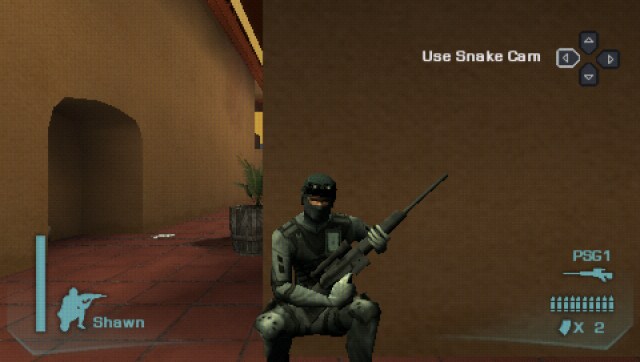 Making my way onto a balcony level, I shot the tangos in the garden, under heavy fire. Once it was clear, I took control of Brian again. I had to kill a tango in the garden, which had somehow missed the melee, and another in the next section of garden, before climbing a ladder and loading into the next section.

Now inside the villa, I shot two tangos in the living room, then continued outside to shoot another one on a balcony opposite the door. However, two surprised me and shot me before I could kill them. I re-entered the villa and went up some stairs, checking under a door with the snake cam until a tango came into view. I shot him in the back of the head, then went downstairs and shot another one. Moving through the villa, I entered an office and shot someone, then another once out the other side before exiting back outside.

After shooting two tangos, I located a hostage in an area at the back. He was a water inspector, not our missing operatives. I swapped over to Shawn again with two objectives. Clear the route for Brian and the hostage, and hack the communications satellites. They were apparently talking to someone, but Joanna couldn't pick up the signal. 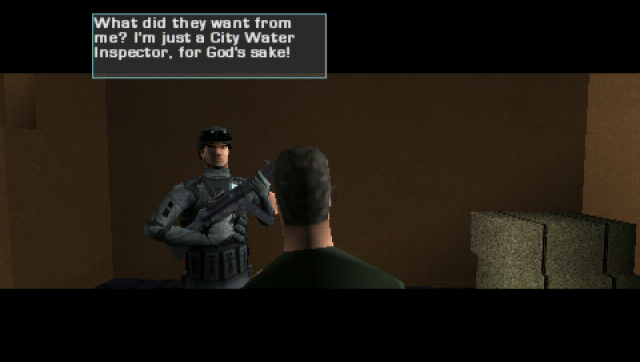 After shooting a tango, I hacked the first of three satellite dishes. I also decided to swap to my handgun, as a sniper rifle is unsuitable for indoor use. Carefully checking some nearby doors, I found a filing room and went inside, finding some documents, which completed a secondary objective.

Exiting outside through a door at the end of the hallway, onto a balcony over yet more gardens. There was a single tango below me, but as I was looking around, a tango who was also on the balcony opened fire at me. I managed to kill them both before moving onwards, going around a large pyramid-shaped skylight. Shooting another tango, I hacked the satellite and followed the path around to shoot another man. After hacking the third satellite, Joanna got the info she needed and I climbed down the nearby ladder to load into the next section. 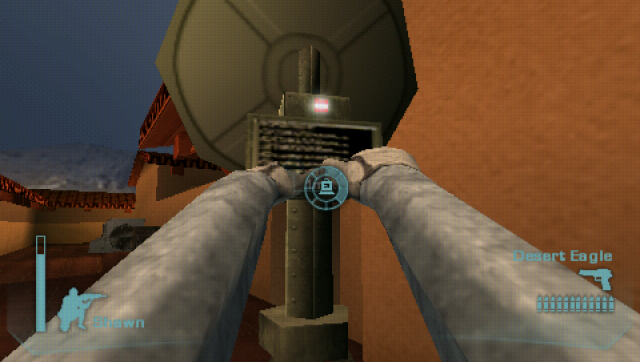 Morales was heading to an airfield which she owned, so we were heading to the extraction point with the hostage to be picked up by helicopter. Picking back up with Brian, I led the hostage through several tangos as we made our way back through the villa. Upon reaching the garden, I swapped back to Shawn and had to snipe a few waves of tangos before the chopper arrived to pick us up.

Operation: Private Airport began at 2315hrs, and saw us gaining access to the airport via the junkyard nextdoor. Our objective was still to rescue our operatives, but also we had to capture Lucas Picares, an associate of Morales. After being dropped off as Brian, I managed to sneak through the truck yard, and around to the area at the rear while killing all six tangos without raising an alarm. 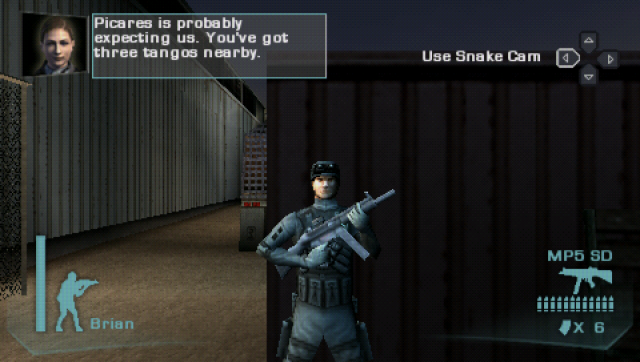 Entering the building, I shot a man in an office, then another around the corner. Neither called out, judging by the whistling I heard coming from inside an office - which I entered to silence. There was another outside the next door who died quickly, and I went upstairs. Joanna came over the comm to tell Shawn to head for Hanger 18, while I shot another man and followed the corridor.

Entering a double door, neither of the two men inside spotted me as I shot them in full view. Following the hallway around, I received a message from Shawn as I opened the door in front of me. He was pinned down in the fire station that was below me, so I shot the tangos for him, and he opened the freight elevator for me. Going around to it, I went down and loaded into the next level while Shawn headed for the hanger. 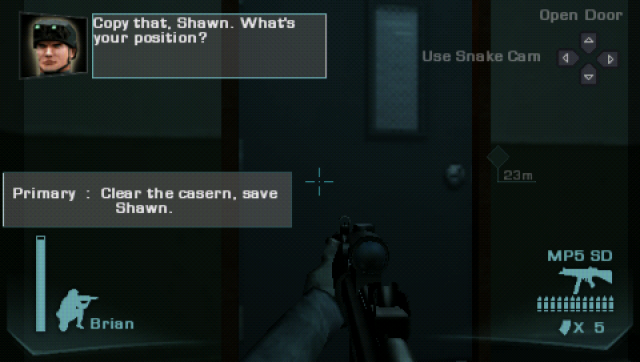 Following a hallway, I shot two men with minimal fuss and reached what I could only assume was a room with a grandfather clock inside, due to a loud ticking sound. I certainly hoped it was not a bomb, in any case. Continuing along the hallway, I turned to face the wall so that I could put my back against it, when a tango came around the corner right beside me and opened fire.

Managing to shoot him, I killed another few further around the corner, before moving into a production line. There were a couple of men in there, but they posed little threat thanks to the moving boxes blocking the majority of their shots. Leaving the line, I headed upstairs to open the gate for Shawn. With that, Brian went back down, and I took control of Shawn.

Using my Desert Eagle handgun, I shot either two or three men - it was difficult to tell since the handgun was basically useless. Entering a building, I could hear machinery, but it turned out to be a hanger. After dealing with the two men inside, I checked out the area a little. Unfortunately, I hadn’t noticed - or come under fire from - the three other tangos in the hanger. 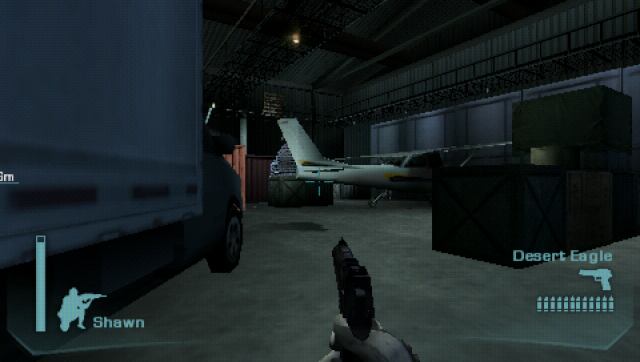 After a firefight which wounded me far too much, I had them cleared out and entered a corridor at the far end, spotting three tangos with the snake cam. Unfortunately, given the angle I couldn’t tag them all, but managed to kill them all with the PSG-1. The room turned out to be a makeshift laboratory, so Shawn called it in, and Joanna said that she would be calling in homeland security.

She immediately followed it up by telling Shawn about a plane that was prepping for take-off, and I loaded into the next section. Picares was getting on a plane, and Brian needed to get to the navigation computer in the control tower to find out where it was going. After shooting two tangos, I went outside to go across to the tower, when “snipers” began firing. I took control of Shawn and shot the two assault rifle users, then provided cover as Brian made his way up to the top. However, as he reached it an RPG was fired at him! 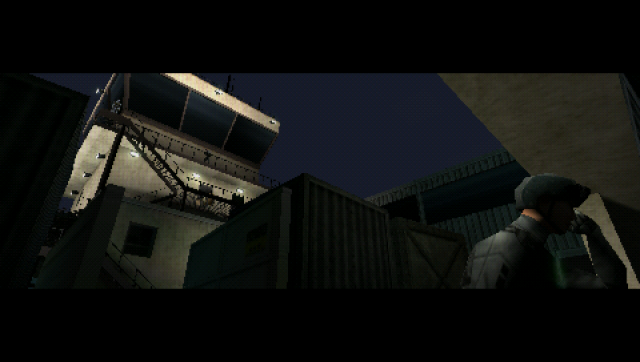 Fortunately, as I took control of Brian again, he was alright, just the windows had been smashed. And then, not all of them… I hooked Joanna into the plane’s radio - somehow - and Picares was talking to some bloke. It was unclear what they were on about, so Joanna said that they would work on it, then warned that two tangos were coming up in the elevator. I took up position beside the elevator and gunned them both down as they exited, then went downstairs. Not that I thought a building that had recently been hit by an RPG shell was a smart idea, but it was probably the only way down.

Loading into the next section, Joanna warned that they were preparing to cut the power in the hanger. Picares was there, and we needed to capture him alive. Not that the mission objective confirmed this, it said that I had to arrest someone named Morrison… 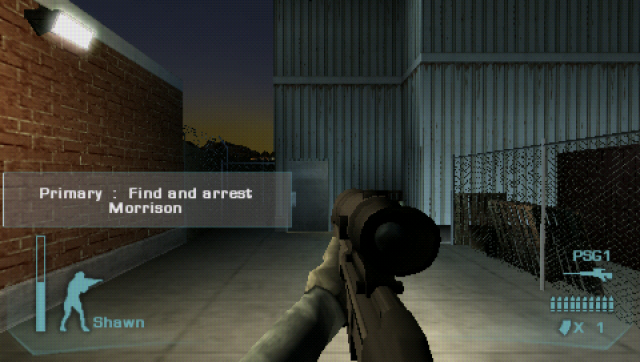 Controlling Shawn, I entered the building ahead of me and went upstairs. Overlooking what appeared to be the makeshift laboratory from before, I shot three men and went down to a door at the back. The next door opened into a hanger, but it was full of crates, and I was shielded by them until I went up some stairs. There were a handful of tangos who fired at me, and the PSG-1 was definitely not designed for fast-paced fighting, so it took some doing to get through.

At the bottom, I confronted Picares when suddenly he injected himself with something, stating that “this is the fate that awaits Las Vegas”. As he fell to the ground in pain, foaming from the mouth, Shawn confirmed that this was not Picares and that the target had escaped…