From London and back to Argentina, we had saved a bank and stopped a chemical weapon, but now we were turning over someone’s house…

Not just anyone’s house, but in fact a house that we had been to before, as we were on Cayman Brac to look through Nikola Gospic’s private estate. What’s more, it was mere days before Christmas, with Operation: Briar Gate set on the 22nd of December 2006. We were looking for evidence of more chemical weapons, and we were to use whatever force we had to.

The plan was for two squads to go in, entering from the rear of the property this time. They weren’t expecting us, but they also wouldn’t be all in the lounge this time. Deploying, Green squad waited behind while I went forwards literally one waypoint to where I had to give the go code. Hitting it, I led the way around the corner and caught some men by surprise as they were relaxing on deck chairs. One tried to run as the other fell, but we gunned him down too. Leading the way up through the pool house, a terrorist spotted us through a window, but died before he could shoot us. I opened a door, where the man inside was crouched and looking at the wall, so he died. Green squad had been shadowing me up to this point, but as I entered the main house I lost sight of them.

As we made our way through the house, we kept surprising people - it was a fantastic change to everyone firing on us all of the time. A few men did fire back before dying, but they must have been Stormtroopers as they kept missing. We reached the lounge, then nipped outside where one of my men shot someone at the far end of the footpath, before I had even aimed at him. 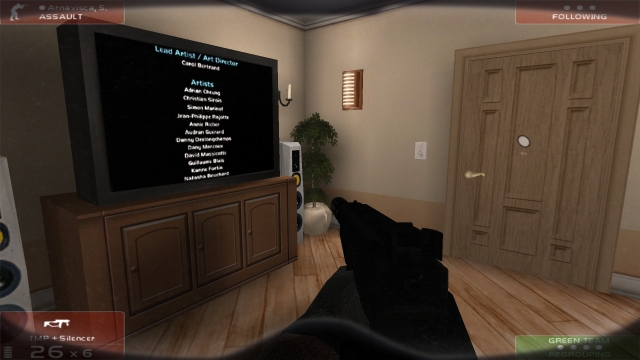 Back inside and into the garage, I shot the last guy in my assigned areas, before heading outside to the final waypoint. I waited for about 10 seconds before checking the map to see where Green squad were, but since I was on a lower level to them, I couldn’t spot them. So, I donned my heartbeat sensor goggles and headed back into the house to find wayward baddies. I was about to leave the lounge, when Green squad shot the final enemy. Mission success in 4:44 with 29 terrorists dead.

A mere six hours later, we were on our way to the airport on Cayman Brac for Operation: Talon Steel, where some of Gospic’s men had seized control and killed an undercover Interpol agent. They had equipment for dispersing the blistering agent which we were looking for at Gospic’s house, in their luggage which had been obtained after the local authorities had blocked them in.

According to our intel, Gospic was dying and wanted one last big hurrah in the guise of a mass murder-suicide. Once he died, however, his considerable fortune would go to Alvaro Gutierrez, the Argentine far right presidential candidate. Our plan was to blitz the entire airport, criss-crossing a few times before converging on the main hangar. Round and around we'll go!

Deploying, we almost immediately began seeing terrorists, and shooting them. They were upstairs, they were on balconies and one was behind a van, before we even got into the first building. I surprised several of them as I went, and it sounded like Green squad were doing well on their end. Passing a window overlooking the hangar, I took a shot at one of the terrorists who looked like he was lining up a shot at me, which opened a can of worms.

We quickly exited that particular landing and, and reached the next go code at the same time as Green squad. Or so I thought. As it transpired, Green squad were just waiting by a door at the moment I looked over at them. So, when I threw a smoke grenade and ran around the corner to kill a sniper, then at least half a dozen terrorists, I was doing it alone.

Reaching the waypoint to enter the hangar, I checked the map and saw that Green squad were nowhere near their go code. As I closed the map, the door in front of me opened revealing two terrorists. I blasted them and rushed in - there was no time to wait for Green squad. The ensuing melee was bloody, with bullets flying everywhere and my squadmates killing most of the terrorists with little help from me. However, the mission was a success in 5:10 with 35 terrorists dead. We took off Christmas and New Year, despite knowing for a fact that Gospic was setting something up in Rio de Janeiro. Then 4th of February 2007 hit, and we entered Operation: Whisper Blade, which saw us heading to Brazil - surprise, surprise...