Having secured an oil refinery and put a stop to a two-bit terrorist group, we were heading to Switzerland… 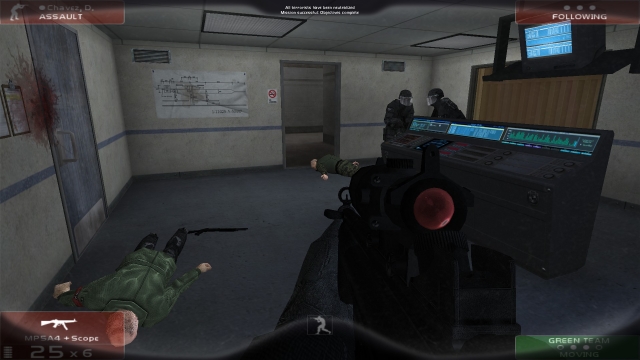 Above, one of my less successful attempts

Operation: Cold Dagger had us heading to Jura Canton, Switzerland, where terrorists had taken delegates from the IMF conference in Geneva hostage. They had also hit the local bank beforehand, so it’s possible that they didn’t know who they had on hand until after they were in trouble and had no escape route. We were to go in and rescue up to five IMF members - no word on how many of the locals I was to rescue, if any.

Sweeney thought that something was odd about this operation, because of the happenstance nature of it. I thought it was odd that the delegates would travel two and a half hours from Geneva just for skiing, when there were perfectly good French ski resorts an hours drive over the border. I looked it up, Geneva is so far away from literally everything else in Switzerland, the closest ski resort is just under two hours away, yet there are multiple mountains in France under two hours away.

Again, I went for the ready-made plan, which would take Gold squad through to clear out the terrorists, whilst Red (led by myself as Ding) and Green swept in to grab the hostages. We deployed into the snow. As we moved out, even before we reached the first door which had a go code set, there were shots fired. I shot a terrorist as I rounded a corner, then looked back only to turn back in time to get shot. Switching to the next specialist, I signalled the go code and we continued on to the waypoint where I shot another terrorist. At the next door, I waited for Green squad to get into position and signalled a go.

Sweeping into the room, I shot the two men guarding the hostage and grabbed the hostage himself before heading on. I went down some stairs and out an open door, finding terrorist corpses around the place. On I went, around a couple of corners and soon reaching the extraction point. Mission success in 2:28 with 20 dead terrorists and one incapacitated RAINBOW. As that basically means dead in this game, I redeployed. There should be more people...

Things went pretty well this time, until the first go code. I didn’t get shot; this time it was a member of Green squad. We continued on, grabbing the hostages - but something happened to Green squad and they were wiped out. Along the way, a member of Gold squad had also been shot and the other wounded, but I grabbed the second hostage (who was luckily cowering in my way) and reached the extraction point unmolested.

It was a mission success in 2:54, with 17 terrorists killed, but at a heavy cost. One RAINBOW was wounded, two were incapacitated and two were KIA. It was a bloodbath for my team, so of course I couldn’t let it stand - I redeployed.

Considering the previous attempt, things went smoothly. I shot people, a member of my squad shot people, and we were generally having a fun time. But just before the second go code, a member of Green squad was shot. I signalled the go, and we stormed into the hostage rooms, rescuing the two hostages, then went out to join Gold squad at the extraction point. Mission success in 2:30, with 19 terrorists killed, and one RAINBOW incapacitated. I decided to let that result stand, and so bid farewell to Louis Loiselle, wishing him a fast recovery. As the mission ended, John Clark came on the radio and told us to not relax yet. As it turned out, Operation: Mountain Watch had us remaining in Switzerland. Some of the terrorists had escaped before our arrival, with some hostages, and taken cover in a tunnel along the N90 highway. Worse still, the tunnel was connected to a bunker created in the 1930s. Curiously, some of the hostages that we had rescued were reporting that the terrorists hadn’t gone straight for the cash in the bank, but for their records first.

But that was for later, for now we were heading into that highway tunnel and bunker, looking to rescue the other IMF delegates. The plan that I chose would see us taking the frontal assault, heading down the mountain to shoot through some cars. I've no idea what Green squad were up to

Deploying, we made our way to the first go point, where I was to snipe down at the terrorists. Of course, I hadn’t read the plan that closely, and hadn’t realised that until told as much on-screen. By the time I had read it, I had been shot and wounded - luckily I hadn’t intended on running anywhere! Green squad managed to clear most of them, and my team shot the remainder before I got down to join Green squad and went past the blockade of cars.

Leading the way carefully inside the tunnel, I was shot the instant a terrorist spotted me. I swapped to another operative and went back that way, carefully managing to snipe the terrorist from another direction, and went on with the mission. It turned out that the bunker was full of terrorists, as I went in and Green squad did whatever they went to do after I hit the go code. I crept through the tunnels, shooting a couple of terrorists along the way, only to be shot by another. Soon afterwards, the final two members of Red squad fell to an overwhelming number of terrorists.

And so I swapped to Green squad and moved to their final waypoint, back up the mountain. With nothing else to do, I went down a manhole cover that was at the top end of the hill, sliding down and shooting a terrorist at the bottom. I murdered my way towards where I remembered the plan had shown the hostages, but as soon as I opened a door, I was shot. I swapped to another member of Green squad and shot someone, then continued into the hostage room. The door opened as I reached it, and my squadmate shot the terrorist. There are too many dark dots...

It was a mission success in 5:27, with 27 terrorists killed, one RAINBOW wounded, two incapacitated and three KIA. Clearly this was not an ideal situation, so I decided to redeploy, and perhaps move a little slower and quieter…

We went again to the sniping point, where we waited and did nothing - because the only way that I could have any visibility towards the terrorists would have been if the wooden barrier was two centimetres higher, or ten centimetres lower. Yes, I was supposed to snipe through a fence, apparently.

I went down the hill and activated the go code, then proceeded. Almost into a hail of gunfire. Thankfully, my squadmate was better prepared and shot them as I ducked back behind a car. We went on to find that the guy who had shot me the first time wasn’t there this time, so we entered the bunker. I shot a man in the first tunnel and we continued on inside. I shot another terrorist, but my MVP of a squadmate murdered a swathe through to the hostage room.

Attempting to be sly, I opened the door slowly - to find the terrorist inside looking at me. I tried to shoot him and open the door as he aimed at the hostages - and I was certain that he’d shot one - before my squadmate killed him. Catching my breath when I found the hostages both alive, I grabbed them and headed back out through the route which Green squad had secured. I came across only dead terrorists on our way back up the mountain, reaching the extraction point without a care. Mission success in 5:26, with 23 terrorists killed and no RAINBOWs injured. And so we packed our bags for Bergen, Norway. Or, according to the dates on the briefings, we waited 358 days? We’ve gone from 30th November 2005 to 12th of February 2005, and now Operation: Sentinel Wolf is going to take place on 5th February 2006? I need to do some math or consult a psychic before I start the next part…