Having spent some time in France, we were taking the slow way home…

Operation: Channel Ferry began on the 8th of August 2009, mere hours after the previous operation, because the Marxist Radical Front had hijacked a ferry. Normally, I’d laugh about a handful of men stealing a slow mode of transport, but since over 70 men somehow made it one mile away a few operations ago, I had to assume there would be significant resistance aboard the ship.

Deploying with McAllen, Raymond and Yacoby, we first went into the bridge and killed everyone. Going outside, I led the way around to some doors heading back inside. Opening them, I found myself in the main common area which was full of tangos in need of shooting. 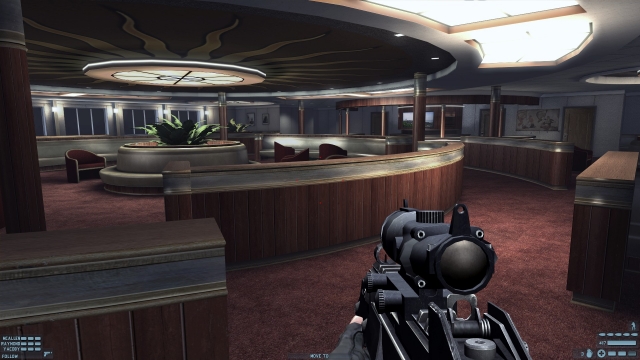 Heading out through a locked door, we headed past some arcade machines and into the shopping area, where the hostages apparently were. It was honestly a disappointing firefight, and in no time at all we had the two hostages in our care. I have to imagine that the terrorists put up a token fight, just so we wouldn’t realise that they wanted us to take the hostages. Because they were annoying, constantly making noise and getting in the way…

We headed out through the back, and downstairs into a lounge with a bar. It was, as you might expect, full of tangos in need of killing. This firefight was a little hairy, as the hostages kept trying to get in the way, but the final few tangos all running out through one door really helped.

Heading into the back, my motion detector showed a bunch of tangos, so I opened the door a crack and shot most of them while they failed to aim through the gap! One of them opened the door, so I shot him, then the final two. The motion detector showed tangos below us, so I tossed down a couple of grenades, presumably missing them all, as I then had to shoot them from the railings. 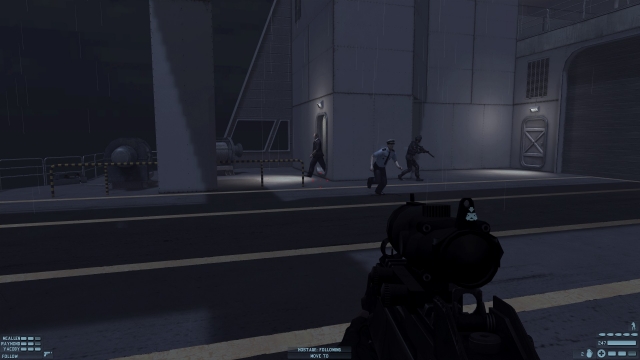 One remained, so I went down to shoot him, then realised that I’d somehow told the hostages to remain upstairs and had to retrieve them. The helicopter came in, and as we were loading them on, we were told that the terrorists went below decks to plant a bomb, so we headed down.

Loading into the next area, which was the car parking bay, I activated my night vision goggles and carefully moved forwards a little, shooting a tango as soon as I spotted him. He wasn’t alone, as we moved to the left and shot a bunch more men before pressing forwards. Reaching the far side, someone had thrown a couple of smoke grenades before we’d killed them all.

Heading down some stairs, we entered a maintenance room and made our way to the engine room. Shooting from the doorways had served me well in the past, so I did the same thing here, taking out most of the terrorists before heading to the left-hand walkway. It led around to the final couple of tangos and the bomb, which I had my squad defuse. Unfortunately, a timer began counting down from five minutes. The terrorists had a backup way to set off the bomb in the cargo hold, so I wasted a good 30 seconds looking for the right door, which was basically facing the bomb on the opposite wall. Time running down quickly, we walked through the corridors and into the cargo hold, shooting tangos through partially-open doors where possible. I did spot at least one container of the Legion virus, but it was nowhere near the bomb, so I’m not certain why it was there.

Entering a control room, I shot a couple of terrorists, but missed one and almost got shot by him as I walked towards the door at the far end. Entering into another cargo area, I swung left as I was killing tangos. Luckily, where I was stood when I stopped walking was in exactly the right area to avoid being shot by the man above me - so I shot him and moved on. Time was running slower than I expected, as we cleared the area and I stumbled across the target laptop. 1:54 remaining, the bomb was well and truly defused. Mission success in 25:11, with 67 dead terrorists. I did hope that they would send some people to get this ferry back to port, because I doubted that my team could handle it. And we had to wait until the 19th of August 2009 for our next mission!

Operation: Marseilles was seeing us back in France, with a member of the October
Resistance defecting and fearing for his life - so we had to go and get him. Yes, that meant going up against the fifth terror organisation since Operation: South Africa. But the informant claimed to know who was behind the Legion theft, at least.

I deployed with Price, and only Price, and John Clark immediately told us that we were in the wrong location, as the guy we were meeting had changed the meeting place. Apparently, he was worried that his friends knew about the garage we were stood in, and didn’t want to get shot. Leaving the room we were in, we headed up some stairs ahead of us, and I ordered Price into the first door on the right. My motion detector showed some tangos heading for us, so I wanted to get the drop on them. Once they were shot, we snuck out onto the upper area overlooking the main repair area, after shooting two men, and shot some more men. Heading back down and into the repair area, we left through the door, exiting into the street. Price complained that he was too old for this, and I shot some people in the alleyway as we rounded the garage.

There was another man in the building we had to go through, and then a whole bunch of them as we tried to exit into the street. Since there was no door to close, my usual strategy of “stay hidden” wasn’t feasible…

With the street clear, we followed it to a blockade, then down a small alley and around a corner. Clark told us that the most direct route to our contact was the roof of a nearby nightclub, so we went down the next alleyway. Two men attacked from a fire escape, but didn’t survive, before we went into the nightclub. Music blared, and as we exited onto the stage someone threw a smoke grenade, giving us the perfect atmosphere. 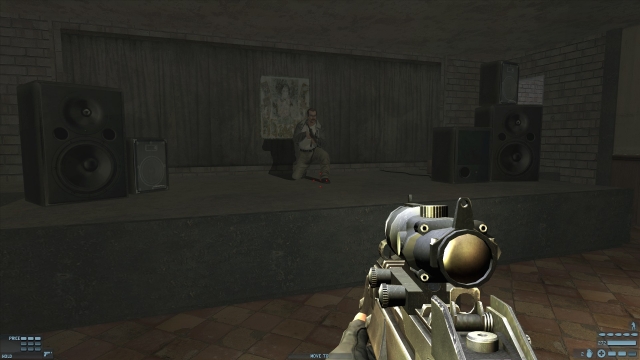 Once the room was clear, we followed the corridor and went upstairs, then up a ladder. From the top of the nightclub, I shot most of the men below us. There were two who I couldn’t quite get the angle on, so I had to go down a ladder to shoot the first. The second, however, was stood next to the ladder. I tried throwing flashbangs down, not wanting to waste a grenade, but he wouldn’t move. After a minute or so, he did shift slightly, giving me a good line of sight to shoot him from where I was.

From there, we went to the end of the alleyway and loaded into the next area. Clark said that our man was close by, but I didn’t realise that meant “if you open the door and don’t immediately shoot two tangos, he will die”... We rescued him, and had to exit the building into a market area. There were civilians scattered around, so I had to be careful as I shot the terrorists who entered the area.

It didn’t help things that our hostage kept yelling that he was being shot, even before the tangos popped up! We left the area into a street, and a tango threw a flashbang out through a door, followed by four tangos pouring out to shoot us. Once they were dead, we went inside, exiting out the other side into another street - full of civilians and tangos. 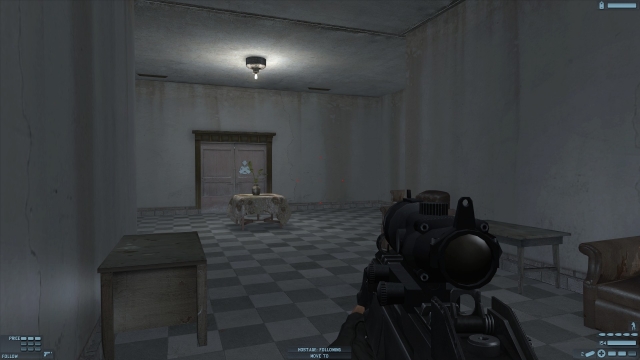 We killed them all as the hostage shouted about them having guns, and being shot, and headed down the street, into an alleyway and through a door. I could see some tangos on the street ahead, and on an apartment balcony, so I started blasting. An RPG went flying, but eventually the coast was clear and I led the way towards the apartment building. After shooting a guy through the window, and cutting through the fused door, I made my way upstairs and shot a couple of men.

Clark told me to hold this position while the helicopter arrived. Staying in the balcony doorway, I shot some men as they threw a smoke grenade and ran out from behind a dumpster. After two waves, I ran out of ammo! Whipping out my handgun, I went to the stairs - some tangos had gotten through while I was changing weapons. Thankfully, Price actually bothered to help, and soon enough the helicopter arrived, shooting the remaining tangos! 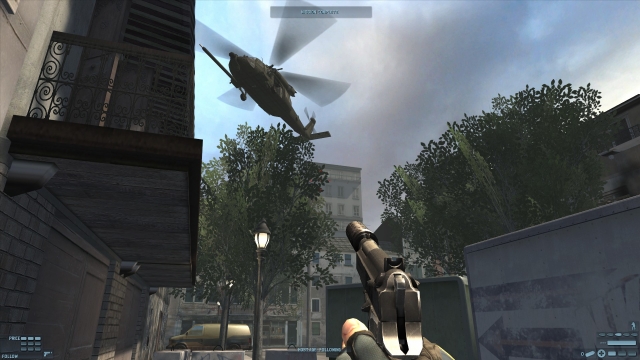 Mission success in 24:08, with 81 dead terrorists. Unfortunately, I wouldn’t have time to relax, as the next operation was tomorrow!