We’re on the final stretch (of Rogue Spear, anyway), and I’ve honestly been impressed with the maps in both of the previous expansions. I’m hoping for more great maps, but also an overarching storyline which has been missing from the other two expansions.

Released in December 2001, well over a year after Covert Operations Essentials, it had to have two missions changed due to the terrorist attack on 11th September that year. It was originally due to release on 15th September, and in 2001 there wasn’t a lot you could do with patches. It was published by Ubisoft, rather than Red Storm Entertainment, which may explain the delay. It was supposed to come out 12 months after the last expansion, so perhaps delayed while Ubisoft was acquiring them.

But enough about maybes, here’s what happens in Black Thorn…

A message has been sent, and terrorists have struck grabbing hostages and shooting guns. The only solution? RAINBOW. A Japanese ambassador had been taken hostage in an embassy in Venezuela, so after planning a quick route for Red and Blue squads, we were off. Blue going down, Red going up

Deploying, I went to shoot a guy on the balcony, but Red squad beat me to it. I tried getting a bead on what I thought was someone else, and was shot. Unable to spot the one who shot me, I entered the house and shot someone, before heading down to the basement. As I snuck around, I came face-to-face with another terrorist and shot him, then the one who was guarding the hostage room. I ran in and shot the terrorist inside and grabbed the hostages. Out through the other door, I shot another terrorist.

Sneaking upstairs and leaning around corners, I didn’t spot anyone and carried on through to the back door. I saw nobody past around the fountain either, so I hurried outside. I was almost at the gate when I heard gunfire. Turning to confront the shooter, they killed me. Moments later, also the hostage… Mission failure in 2:22, with six RAINBOWs KIA, and eight terrorists killed. So, I redeployed to try and give it another go, rather than trying to replan just yet. I spotted the guy on the balcony who had killed me, and he was gunned down by Red squad, as was someone heading for the front door. We went inside and headed downstairs, killing the guy guarding the door and the one inside, then the one at the other door. We had the hostage, so far everything was good. Although I hadn’t heard from Red squad in a while…

We went back upstairs, and I shot someone who was patrolling. We went out to the front door, and we killed a terrorist to the right, and I swept the rooftops to find a sign of the one who had killed the hostage before. I spotted him as we rounded the fountain, on the roof to my right, and shot him before delivering the hostage to the extraction point.

It was at this point that I was worried about Red squad. No reports, and they definitely hadn’t grabbed their hostage yet. I went back through the house, starting upstairs where I killed a few terrorists as I went. I found Red squad on their first staircase, the leader having gotten caught on something. With a sigh and a bit of pushing, I released him and he led his team through their checkpoints as I continued sweeping the house carefully. Red squad began firing in what I assumed was the hostage room, and the mission ended successfully. It had taken 4:48, and we had killed 17 terrorists. It was bloodier than it should have been, but the Japanese ambassador was safe, and we were on to Operation: Silent Ace. Which, as I go by the online name Acelister (Ace for short), I identified with.

An Italian cruise ship anchored in Tunis, Tunisia, had been seized by unknown terrorists, who had planted two bombs. One in the bar, one in the casino - I assumed it was a small cruise ship, as most have multiple bars, and this was at the other end of the ship. My plan was to enter through the ramp to the far right, then head into the main entryway, up the stairs to the bar, then around the ship to the casino. We deployed, and headed for the ramp. I led the way into the ship - which was smaller than I had imagined - and entered the passenger cabins. One of my squad reported spotting someone, so I assumed they had shot a terrorist, and we went around before I spotted the man I was warned about. I shot him in the back, then we went up some stairs to the main area.

Spotting a terrorist leaning against a pillar, I waited to see if there were any others. Once I was sure that it was clear, I shot him - and alerted someone. I carefully made my way towards the main staircase, and was shot dead. Before I could swap to someone else, the two RAINBOWs behind me had been shot too. Finally in control of the final member of the team, I saw the one who had shot my people, and killed him. Heading up the stairs carefully, I approached the bar. I checked the right, but before I could turn left I was shot by a terrorist. Failure in 2:41, two RAINBOWs KIA and two wounded. Only four terrorists dead. Not the worst result, but hardly a career highlight.

Redeploying, we moved into the cruise ship and actually reached the first terrorist as he was entering a cabin - and shot him in the back. I went into the main area and noticed a terrorist upstairs, opposite my doorway, as well as the one next to the pillar. I shot them both, then hurried upstairs where we shot another couple of terrorists. I entered the bar area and shot at the men inside - but my aim wasn’t good enough. Failure in 1:23, the bomb was set off. No RAINBOWs injured or killed, but we did kill six terrorists.

I’m sorry to say that my next redeployment happened exactly the same way, except for the fact that I shot a couple more people. Failure in 1:31, after the bomb activated, with eight terrorists killed.

We deployed once more and made our way back to the bar. We burst in, and I managed to kill the terrorist who kept activating the bomb. We cleared the area, then went around on the deck outside, to the front of the ship.

Once we arrived, I checked through the windows, then decided to shoot through them rather than make our way to the door. We wiped them out, just before they activated the bomb. We I went inside, I heard a window smash and thought we were under fire - it turned out to be one of my squad mates just randomly smashing a window… 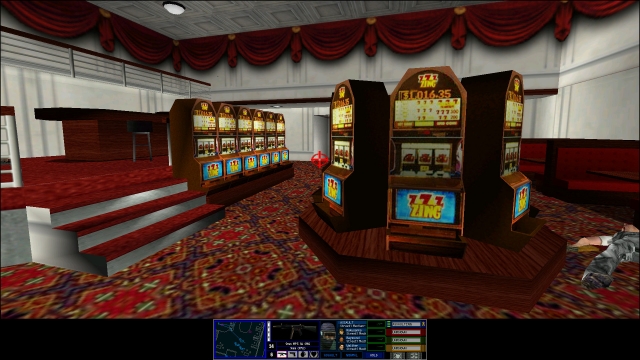 Much to my dismay, this was not the time to play the slots...

We went upstairs, and past the pool where we took out another terrorist. As we approached the cockpit, where the hostages were being held, I noticed that there was a window. I went around to it and shot the two terrorists inside, before going in and grabbing the two hostages.

With them in tow, I followed my waypoints back downstairs to the main entrance, and led them outside to the extraction point on the dock. Success in 5:23, with 13 terrorists dead.

We were to head to Loyada next to rescue some hostages. We had a bus to catch…