From Brazil to Argentina, and now we were heading to a private bank in London to withdraw some terrorists…

Operation: Lion Shadow saw a 400 year old private banking house in London having been taken over by terrorists who, I would soon learn, had awful English accents. Our main concern was, of course, to ensure that some financial records were not destroyed, while rescuing the hostages was a secondary objective. Weird, right?

The man in charge of the terrorists had been identified as Douglas Preston, former British army vet who publicly supported neo-fascists. Despite dropping off the radar in recent years, he was just the sort of man that Alvaro Gutierrez would have around for drinks.

Looking at the plan, things were busy and saw three teams crossing paths all over the place. It would be hectic, that much was clear. So, we deployed.

Green squad took position out the front of the bank while I led Red squad around to the right side door. Meanwhile, Gold squad were getting on top of a tour bus. I had hoped that they were getting into position and not just taking a London tour, but I had my own waypoints to worry about. "Two for the tour, please!"

There were go codes aplenty, so I won’t point them all out individually, suffice to say that I saw plenty of Green squad. I went inside and shot a terrorist, then another who appeared down the opposite end of the hallway. I shot another in an office before calling in Green squad and mirroring their way up some stairs. We flanked each other and shot a bunch of terrorists in a gallery before I went and shot a terrorist who appeared to have stopped for a scotch.

Chasing another terrorist through a hallway, I shot him before waiting for Green squad to get into position. We stormed the room where the financial records were, and I shot a terrorist as he sat at a laptop. Why they had waited this long to try and delete them was anyone’s guess, but we saved that spreadsheet. 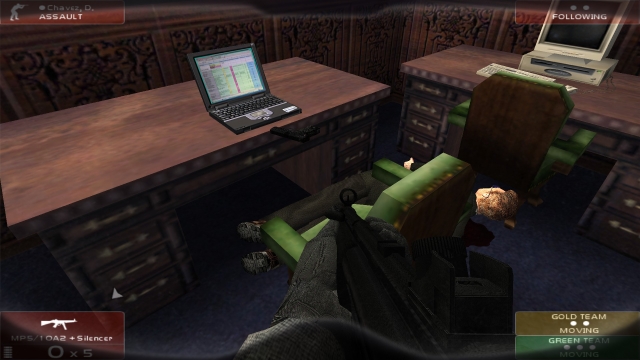 Out into another hallway, I entered a room that had a spiral staircase down to the vault. We went downstairs and I got curious, tipping our hand that we were there when I was spotted through bulletproof glass by two terrorists. Luckily, another one opened the keypad-locked door for me, so I shot him and his three friends, before heading into the vault. Inside, I reacted swiftly and shot Preston - and a hostage, failing the mission.

Yes, unfortunately my itchy trigger finger was once again my downfall, so the mission was a failure in 5:35, with 26 terrorists dead. I had to restart because one dead hostage is too many for RAINBOW, but you can lose all but one of your operatives without repercussion…

As you can guess, the second attempt went pretty much the same as before. A couple of the terrorists were in different places, but things went well until the keypad-locked door. This time, I waited for Green squad to get into position, so they came through and opened the door for us. Unfortunately, the pathfinding got stuck a little, resulting in Green squad blocking us from going in, and one of my squadmates blocking them from coming out.

Once that was, eventually, resolved I went into the vault where one of my squadmates shot Preston. I grabbed the hostages and we made our escape carefully. We reached the street outside without incident, and the mission was a success in 7:00, with 28 terrorists killed. That took place on 23rd September 2006, but our next mission wouldn’t kick off until Remembrance Day, 11th November 2006.

Operation: Broken Stone saw us heading back to Pilar in Argentina, to the meat-packing plant which we had cleared in Operation: Crimson Hook back in May. The place was being used to distribute chemical agents, so we were being sent in to put a stop to that. The plan appeared to be similar to the one from the last time we were here, except the teams swapped around a bit. Each of the bomb locations was set up to have Red and Gold squad pincer them, and the final would see all three teams converging. At least I wasn't doing any circles like Green

Deploying outside the plant, I led Red squad off to the right, whilst Green and Gold went left. While I walked, I heard some terrorists getting shot, before surprising a terrorist who was on the other side of a van. The door opened up, and I gunned down another one before leading the team inside and dropping another two. Into the next section, I shot a terrorist to the left, then aimed down the far end where my men apparently couldn’t shoot the guy in the control room to the right.

We took up position, and when Gold confirmed that they were in position, we went in and gunned down a few more terrorists. A short walk later, I gave the second go code, and I shot a terrorist before bursting into the second bomb room. However, the bomb wasn’t located where I thought it was, so a terrorist dashed over and hit the button. Mission failure in 2:26, 19 terrorists dead - as well as everyone else in the vicinity of that VX nerve agent eventually.

Immediately right, instead of opposite the doors, what a trickster

Redeploying, things went the same, except there were two terrorists outside by the van, and nobody in the control room. We burst into the bomb room again, only for my bullets to miss the guy who ran for the bomb. Mission failure in 2:18 with 18 terrorists dead.

Third time hopefully being the charm, we redeployed. This time, the two men weren’t beside the van, they were behind it. Once inside, there was nobody in the control room, nor to the left. We made our way to the bomb room once more, I signaled the go code and we went in. I somehow avoided being killed as I took aim at the man running for the bomb and nailed him.

With the room clear, we moved on through the cafeteria before heading upstairs. I was admittedly overcautious as I went, since Green squad had been through here earlier. Green and Gold squads were waiting for me to get into position and give the go code for ages before I got into position. I gave the go and we burst in, them two taking out those on the ground floor, and me leading my men to shoot the terrorists on the upper gantry. In seconds, the mission was a success - 3:42 and 30 dead terrorists. 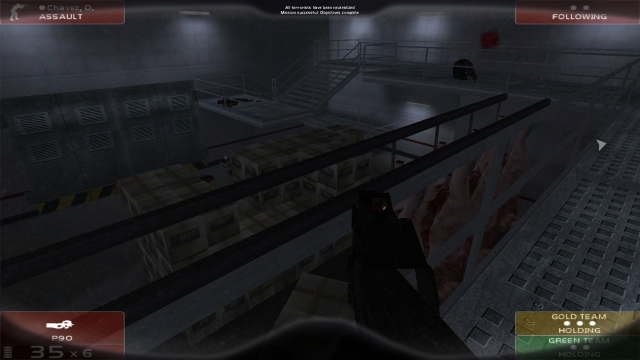 Longing for a bit of a holiday, Operation: Briar Gate was over a month away on 22nd December 2006, and would see us returning to Cayman Brac for some ransacking…