After a very successful mission to London, Rainbow Six were on their way to the next terrorist hot spot…

We were soon being redeployed to Operation Cold Thunder in the Congo. Hutu Rebels had captured a research station run by the Horizon Corporation, and were holding the staff hostage. This included Dr. Catherine Winston, an expert on filoviruses, who was the high priority rescue. I put a lot of thought into this one

Unlike the previous mission, I was in charge of planning everything. This, of course, led to some missteps where I tried being too smart for my own good. Send in Gold squad to recon, then send in the others to clear various sections of the house the target was in. This ended poorly in less than one and a half minutes, with three Killed In Action (KIA), one wounded and the hostage being murdered.

My next attempt replaced the recon Gold squad member with a Red squad assault guy, but changed little else. This resulted in everyone dead, ironically except most of the terrorists. Back to the drawing board, where I moved a specialist from Green to Blue squad. Pretty much just the same plan

That actually resulted in a success, but at great cost. Five KIA, with myself successfully rescuing Dr Winston on my own, and returning to the extraction zone behind Green squad. So, I decided to try it again, this time taking control of Karl Haider as head of Green squad, instead of Andrew Burke of Red Squad.

We went in, and Blue squad hung back awaiting their Go Code. I ignored the waypoints I had set, and entered the house, taking out three terrorists while Red squad came in and killed a fourth. After I had killed the first one, however, I gave the Go for Blue, and they swept in, rescuing the hostage. It was weird that we were told there were multiple hostages, but only one was being held there…

The only injury was Santiago Arnavisca, when I accidentally shot him, mistaking him for a Hutu Rebel. He was wounded, but we all reached the extraction point. The mission took 3:44, and eight terrorists were killed. I also learned several valuable lessons, the main one seeming to be “see where the AI keeps dying, go there, and kill the enemy first”. Dr Winston, I presume (and hope, because I rescued her)

John Clark, RAINBOW commander, congratulated us, and made Dr Winston an advisor, since he reckoned we would need a biohazard expert before too long. As for Rainbow Six, we were sent on to Operation Angel Wire.

The Phoenix Group had gained control of an oil rig in the North Sea. Not only were the crew were being held hostage, but there were bombs that required neutralising. Insertion was to be by inflatable boat, and extraction via helicopter on the upper deck. This, of course, meant that we had to defuse the bombs and kill all of the terrorists before we could extract with the hostages.

I chose my team - two demolition, one scout and a whole mess of assault - and spread them into three teams. I took charge of Green squad as Roger McAllen with the other demo guy Gerald Morris, and had the scout with Blue squad, and Red squad as all assault. My plan had Blue and Red running parallel to each other, before meeting up on the way to the extraction point. I figured that Green would defuse the bombs, and we’d be laughing. You can just about see Red squad on the bottom left

Deploying, I followed Blue before losing them, and making my own way. At one point, I caught up to them sneaking up some stairs and accidentally shot one of them non-fatally. I went on ahead, and briefly wondered where Red squad were, but encountered a terrorist and was shot. I took control of Morris, and I took out the terrorist, before locating one of the bombs and killing another man.

It was a few minutes later when I was caught by surprise by another terrorist, while I was checking the map. Taking control of Antonio Maldini, the scout in Blue squad, I led the charge back to where I was, and murdered the terrorist, then two others. After a bit of searching for the second bomb, instead I found another three terrorists, and killed them. Counting the two that Red squad had reported dead, that meant the mission was completed in just over 10 minutes, but with two KIA. I figured I could do better, so went back to the planning stage. 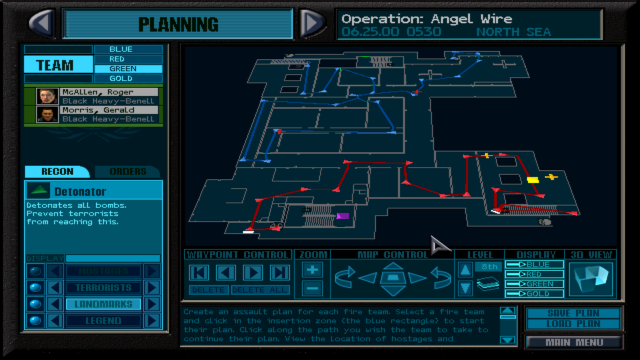 There were a few other floors to plan, too...

Plonking the two demolitions specialists into the other squads, one each in Blue and Red, I took charge of Antonio Maldini and Blue squad and deployed. Ignoring the waypoints I had set, I ran the way I had taken Green squad before, and began taking out terrorists. I also realised why I hadn’t seen Red squad, as I had told them to move slowly. With the size of the oil rig, that was stupid.

Once more, I deactivated the first bomb, and began looking for the second. I didn’t want to risk checking my map again to get shot… I tried to remember where all of the 10 terrorists were, but while exploding I came across the second bomb instead. I deactivated it, and it was mission complete. Six minutes and 44 seconds, one team member wounded (not by me), and some of them were fatigued. 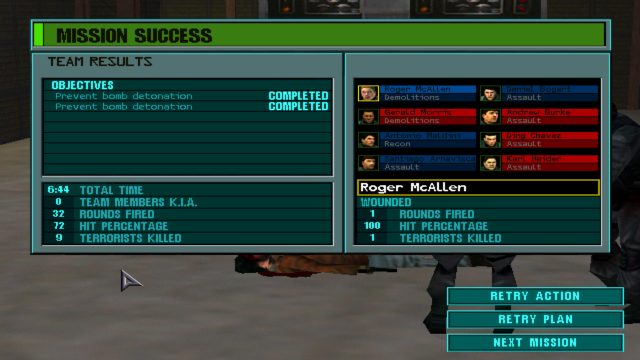 I hadn’t considered not filling the entire roster, to keep people from being too knackered from constant deployment, but this mistake was going to affect Operation: Sun Devil, you could guarantee it…