How have I got Iron Wrath, an expansion that wasn’t released onto Steam and isn’t easily available after it’s previously-free release on the world wide web? It was released free, so I used a guide on ModDB.

This is my ongoing exploration of Tom Clancy’s Rainbow Six series, played in release order, where I will chronicle my playthrough like a text-based Let’s Play. This time I start Tom Clancy's Rainbow Six 3: Iron Wrath.

We had finally seen the end of Nikola Gospic and Alvaro Gutierrez’s evil plan, so were going to mourn our dead - or ignore that they died at all as usual. The main thing was that Gospic’s plans were scuppered and done with. Hopefully… Operation: Scorched Legend began with a startling realisation - this expansion didn’t have pre-made plans. It was the 22nd of August 2007 and terrorists had taken hostages in St Kliment Ohridski University, in Sofia City, Bulgaria. I had to make a plan, something I hadn’t done in quite a while at this point, to rescue some hostages before they started killing them. It was a pretty low stakes mission, considering that this only happened as the Bulgarian police screwed up grabbing this group and some escaped. Though what was chillingly telling was when John Clark said “this operation hasn’t been planned or thought out”. I seem to remember my plans having that feel to them in prior games…

Kevin Sweeney told me basically the same as Clark had, but with a return to them being voiced I had to put up with his heavy-Yorkshire accent. Again, despite being born and raised in Birmingham… These were the dregs of Nikola Gospic’s neo-Fascist group, and they weren’t particularly well armed or trained.

In the planning room, I had a look around the map for the hostages. One was closer to the back, so I told Green squad to go from the left-hand something something point, grab them and return to the extraction. I was going to lead Red squad from the right-hand point to grab the hostage from the second story, then go back to the extraction point. We deployed, and things went very smoothly. We entered through the right-hand of three main doors and made our way to an out-of-the-way staircase. One of my men shot a terrorist near the main stairs before we went through a door and upstairs. We could see some terrorists outside, so we shot them - a couple in sniper positions, one or two running around outside.

We went out into the landing, and the target room had a window, so I peeked in and spotted the terrorist, shooting him before he could shoot me or the hostage, then I went in and grabbed him before returning the way we’d come, except down the main stairs instead.

At the extraction point I waited for Green squad to confirm, but then they stopped moving, reporting as holding position. I couldn’t see them from the map, so I went back inside and made my way to them. We shot one or two terrorists along the way, and found Green squad stood on the extraction point - but the hostage wasn’t. I grabbed her and moved her onto it - but the mission didn’t end. 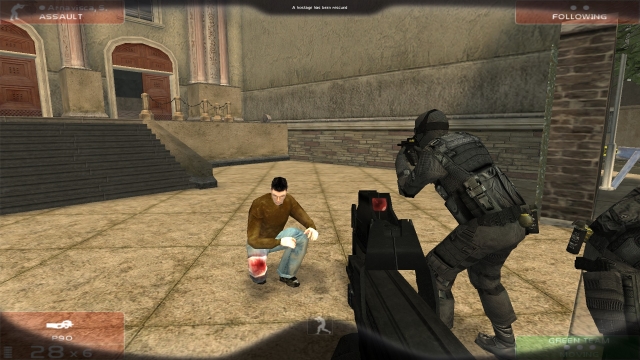 Swearing, I went back the way that Green squad had entered the university, passing through a library, as well as going past some terrorist corpses. Deciding to begin my search for more hostages upstairs, I went up the closest staircase and opened a door. It led to a balcony, with a terrorist, so I shot him and turned around. The next door contained the hostage, as well as two terrorists! I shot them both, though the second may have begun to surrender as I pulled the trigger, and grabbed the hostage.

Together, we returned to Green squad’s extraction point, and the mission ended. Mission success in 7:19, with 16 terrorists dead. And a lesson learned about checking the whole map for hostage dots… 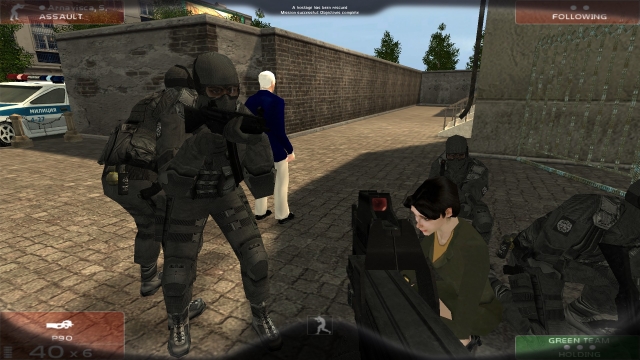 Not that it would matter for the next mission, Operation: Solo Furnace which took place a week or so later on the 30th August 2007. Terrorists had attempted to steal nuclear fuel rods from a decommissioned reactor in Kozloduy, Bulgaria, and been contained by security forces. We were going in to neutralise them all.

After creating a plan which saw two squads going in and sweeping the grounds - Red squad going low then high, Green squad clearing everything else - we deployed. It was bad. Almost immediately, Green squad had two injured men. I led Red squad into the first building and we took out two terrorists, before going through a door and down a slope to clear the basement area. It was so dark that I had to put on my night vision goggles. Before we had gone half way, Green squad were all dead. We found a few terrorists in the lower level before heading up a slope, then up a ramp to a gantry. We came under fire, and I was shot. I took control of the next operative and continued into the building, finding the main holding point for the terrorists. I was shot again before we could shoot them all. I took control of the third operative and went into a hallway, shooting another one, before heading into a control room with another terrorist.

Leaving that building I went through another one, where the terrorist had shot me earlier, but one of my men had gotten revenge before I took over control. Going down the ladder, I reached the end of my waypoints, so decided to see where Green squad had been killed and resume their route. It wasn’t very far away, actually on the opposite side of the building which I was next to.

After following their route into the main building, I entered a stairwell and heard a terrorist. I stopped and put my back to the wall, checking a room to my left before returning to the stairwell. Then, I spotted his legs. He yelled that he was getting “out of here”, so I chased him up the stairs and in through the door he had opened, shooting him in the back. 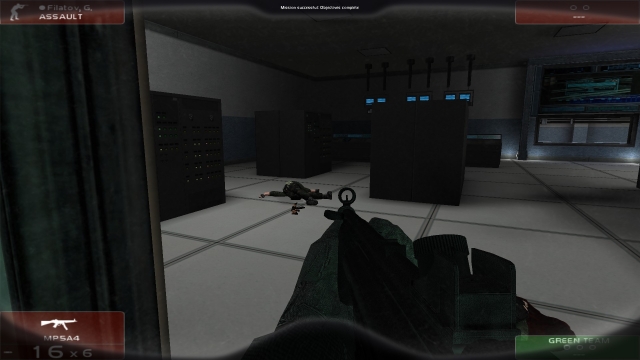 Mission success in 6:43 with 19 terrorists dead, one RAINBOW incapacitated and four KIA. Obviously, this was unacceptable… One or two I could accept, but I had more missions ahead and couldn’t waste five operatives on a single mission. After altering Green squad’s waypoints a bit, I redeployed.

Things for me went pretty much the same, except for being killed on the gantry. After that, we hit the main room with a huge success, as three of the terrorists were stood right next to each other, getting gunned down before they could run. We shot the one in the hallway, then by the time we reached the control room and shot him the mission was over. Mission success in 3:24 with 18 terrorists killed, and no RAINBOW injuries or fatalities.

Then I went back to ModDB and found the Ubisoft-made plans and installed them, figuring that it will make the next missions much less stressful…