Released in 2006 for PC and Xbox 360, and a year later for PlayStation 3, Tom Clancy's Rainbow Six: Vegas was developed by Ubisoft Montreal. This was the first game that had nothing to do with Red Storm Entertainment, the creators of the franchise, probably because they were busy with Rainbow Six: Lockdown and Ghost Recon stuff. It was also released on PlayStation Portable, but that was an entirely different game!

Yes, this does mean that I’m skipping Rainbow Six: Critical Hour, but that’s because of two very good reasons. One: it’s not backwards compatible, and two: it wasn’t actually released in Europe, so finding a copy is prohibitively expensive. The story of that game is narrated by a retiring John Clark, giving briefings about past operations. The seven missions are a mixture from the first two games, so I’ve already written about them anyway.

Now, let’s get into Tom Clancy's Rainbow Six: Vegas, which I’m running without mods, and find out what’s going on in Sin City… 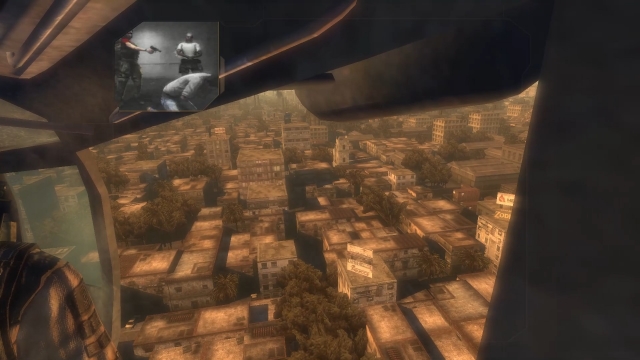 This is my ongoing exploration of Tom Clancy’s Rainbow Six series, played in release order, where I will chronicle my playthrough like a text-based Let’s Play. This time I begin Tom Clancy's Rainbow Six: Vegas.

2009 had been a busy year, with a virus being stolen in May, and us taking out terrorists from six different groups between then and August! It had been such an ordeal, that by the time 2010 came around Domingo Chavez had been promoted, and Logan Keller was a team leader. Who was he? I was sure we’d find out together, as he’d never been mentioned before.

It was 2nd of July 2010, at 1850hrs, when Operation: Mexican Border began. Logan’s squad were flying into San Joshua del Mosquiera via helicopter, on the trail of Irena Morales, a dangerous terrorist, who was working with a smuggler group The Coyotes. The squad was made up of Kan Akahashi and Gabriel Nowak, with Joanna Torrese providing us with intel.

Arriving at set coordinates, I fastroped down to the street moments before the helicopter was fired on by an RPG. Joanna told the pilot, Brody Lukin, to get them out of there, then contacted me over comms to tell me to meet Kan and Gabriel at an old Spanish mission. Why I couldn’t have been dropped off at that second rally point too, I’ve no idea, but presumably this was a massive detour. 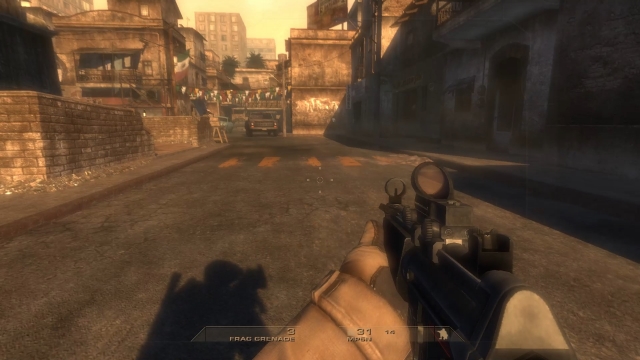 Taking cover behind a wall, I shot a tango ahead of me when he began firing down the alley, despite having not seen me. Exiting into a town square, I snuck around a monument and came under fire from more tangos who had seen me crouched behind the broken wall. After shooting a couple of them, more began firing at me and I broke off, heading down an alleyway to the left.

As I came out of the alleyway, the tangos knew I was there and started firing at me before I shot them all. Going through another alleyway, I crossed a street into a building. Joanna suggested I equip my silencer, so I did and snuck inside, shooting one man.

A tooltip came up (as they had been doing regularly) telling me to snakecam the door, unfortunately I misread and opened the door by mistake, alerting the two men inside. I shot them and headed upstairs, then up a ladder onto the roof where I shot another tango before rappelling down the wall. 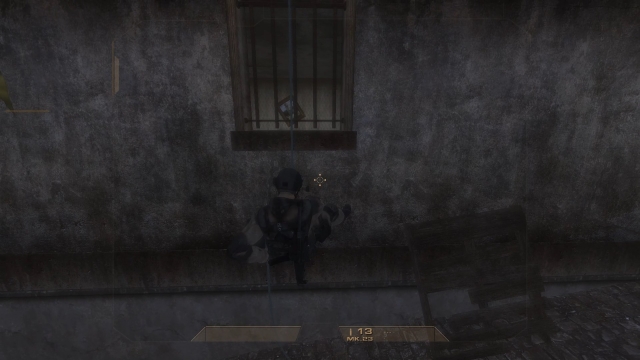 Once in the street below, I tried to sneak around to ambush the men ahead of me, but after shooting the first one it alerted everyone. I killed them all, and headed down into a plaza where I was told to use a smoke grenade, but unfortunately not where to place it. As a result, I couldn’t see anyone who was shooting in my direction, and once I’d repositioned they could all see me, too.

One brief firefight later, I had to loop around the street, where I hid behind a wall whilst a tango mounted another one. Somehow he, and his friend on a balcony above him, spotted me and opened fire, requiring a quick shooting. The helicopter came in, and my squadmates secured the rooftop. I had to rush across the street and climb the stairs, before being reunited with my team.

Unfortunately, the Coyotes somehow had an ambush ready to go, and attacked the rooftop from elevated positions. Once we were clear, I had absolutely no idea where to go, assuming that we were going to rappel down - I eventually headed back downstairs, where more tangos waited for us, and swarmed the church. 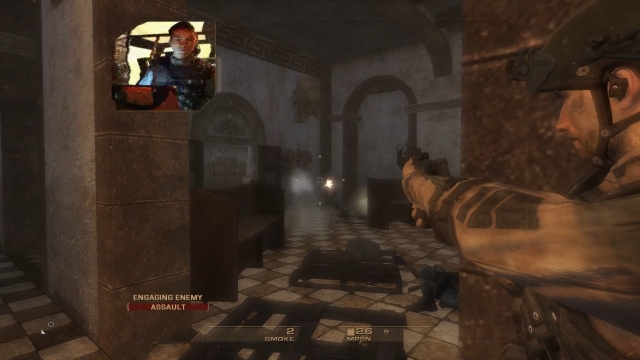 When we were done, Joanna told us to get to a trainyard, which was being used to smuggle people across the border. It also apparently had hidden machine gun nests, so that was going to be fun! As we got into position, Joanna told us to rescue any hostages, and Gabriel asked why we cared about illegal immigrants. Kan said that we were helping people who needed help, and I had to wonder how Gabriel passed his psychological evaluation.

We blew the gate open, and had a firefight before heading down an alleyway. It led to a building which had multiple entry points, so I used my snake cam to check things out - actually making it work this time. I sent the squad in through the left door while I came in the front. By the time I’d opened the door, the three men inside were already dead.

Exiting the room, I tossed a smoke grenade into the next building through an open window, and stormed inside. It was a warehouse, full of large boxes, sandbags, and tangos. After a few minutes, the place was clear and we left via a fastrope hook on the upper level.

Loading into the next area, we were just outside the trainyard. The snake cam didn’t give me much information, since it was in black & white, so we headed in while I checked the map. It showed movement - not as well as the motion detector had done, but at least I knew a general direction that enemies were in. I led the way inside the closest building, and upstairs to kill a few tangos. Exiting onto the balcony, we shot as many tangos as we could, before going down a ladder and moving forwards.

The trainyard was littered with tangos, and one of those aforementioned hidden machine gun nests, which was inside a train carriage. Eventually, we reached the end and went inside a door to the left, going upstairs. After a couple of doors, a hostage screamed out from behind the final door. My snakecam showed that there were three tangos, and three hostages. 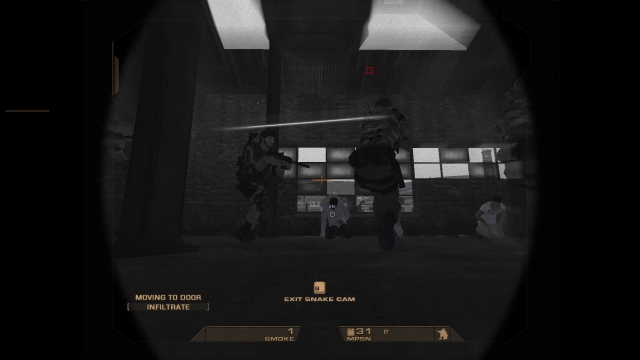 We told the hostages to wait here, and they told us that there were more terrorists “over there” without pointing, and Joanna told us that she was detecting an old elevator shaft. Morales may have gone down it, so we had to, too. However, we had to go down a ladder where we came under fire from tangos in a second section of the trainyard.

Fighting our way into a building, we went down some stairs and into a tunnel. It ended in a large building full of trains and tangos, so we fought them off. Checking the snake cam before going through, I spotted a lone tango, so opened the door and shot him. Then, we were at the elevator shaft, leading down into a mine. We connected and rappelled down, disturbing a few tangos as we went, before entering the mines.

Joanna contacted us, saying that she’d lost Morales’ heat signature, and was losing ours. Moments later, we lost radio contact too. Apparently, going deep underground wasn’t conducive to maintaining a solid signal! We continued down the tunnel, and upon reaching the end overheard Morales talking to some of her men. I started shooting, and Morales ran through a door at the rear. Once her men were dealt with, we blew open her hidey-hole. 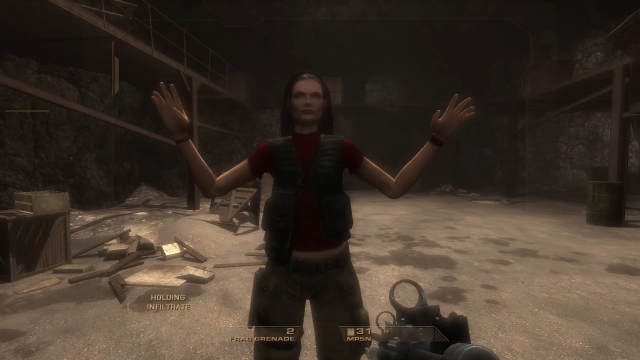 Running in, she was alone - and knew who we were. Also that we’d killed Marcello, which was apparently a shame. Obviously, the squad were shaken by her knowing our names, but we didn’t have time to worry about it too much, as she caused a cave-in which knocked me out as more of her men swarmed in and she kidnapped them!

When I awoke, I only had my pistol, so I headed off to get my men back. I followed the tunnels carefully, until I encountered two men. Forgetting to equip my silencer, what followed were numerous killings as I made my way through the tunnels. I did grab someone’s shotgun, however, which made things a bit easier. Reaching the tunnels end, I went through a door and loaded into the next area.

Joanna finally reestablished contact, and said that the other two had left the tunnels minutes earlier. Moments later, she sent me through a feed that she was receiving from Morales herself to my HUD. I began to climb a rope, so had no choice but to watch as she told us to stay out of her affairs, and then shot one of my men in the leg before cutting the feed. 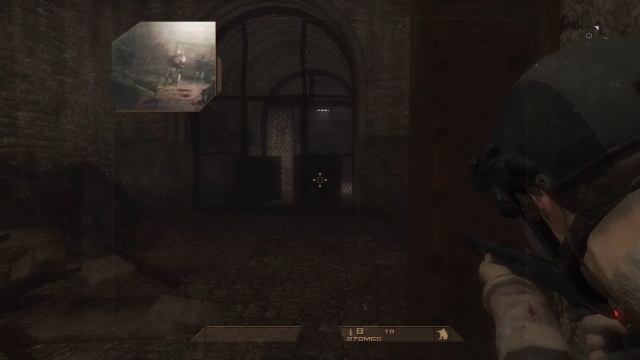 As I climbed, the elevator fell past me, just missing me, and at the top was a lone tango, who I shot. Another one came running to see what had happened, somehow not seeing me, so I shot him too. In no time I arrived at the room where the squad had been held, but it was empty now. I exited out through some double doors and equipped my silencer. I could hear tangos chatting, so carefully shot the only one that I could see, on the floor below me and at quite a distance. I won’t lie, I was impressed that my handgun took him down in one shot.

Sneaking around, I shot one more before multiple tangos appeared to spot me at the same instance, firing hot lead at me. Swapping to the shotgun, I made relatively short work of them, and headed for the lower level. One more tango shot me in the back, but I blasted him in the face in return. To his credit, he did furnish me with a rifle, which was by far my prefered weapon type.

I arrived at some double doors, and my snake cam showed that there were tangos inside. After equipping a silencer, I opened the door and shot the closest one. Unfortunately, despite killing him, there was another to the right of me, and suddenly the doorway was a very dangerous place to be. It took a few minutes of sneaking and pot shots to kill the rest of the men in the room, but I made it outside. The helicopter came in to get me out of there, but since the squad’s GPS beacons had been disabled, we had no idea where Kan and Gabriel were now. Logan even argued with Ding Chavez, reminding him that he had gone in to save Dieter Weber (in Operation: Desert Village), but Ding wanted me to get to Las Vegas to address a situation in progress… He suspected it to be connected to this “thing” with Morales…