Having stopped some terrorists in an oil refinery, then inexplicably traveled back in time to rescue some IMF delegates before skipping forwards by almost an entire year, we were on our way to Bergen in Norway…

Honestly, I’ve analysed the dates and they just don’t make sense, so I’m taking the game at its word. It is now 5th February 2006, the previous two missions took place on 12th February 2005, and the first mission was on 30th November 2005. Whatever the date, I was heading to Norway to stop some terrorists who had bombs.

There were three bombs in a shipyard, and a lot of potential sniper spots. For them, not me. Though saying that, the plan had Gold squad setting up in a sniping position. Green squad were to take an adjacent position to me for two of the three bombs, but the other was all on me. We deployed. Not much teamwork here

We made our way to the first go point, where I was left completely alone. One of the other teams shot a couple of terrorists, but I didn’t see that as there were buildings between us. I signaled a go, and we went inside the main building where we shot some people. The bomb was in the middle of the room, so I disarmed it while Green squad cleaned up, then we carried on.

Leading Red squad up some stairs, we shot a few terrorists as we cleared out the offices one-by-one. Then it was back downstairs to the machine room, where a single terrorist died while protecting the second bomb. I defused it and headed for the next go code, which Green squad had been waiting for since before I had finished with upstairs.

We met minimal resistance between the machine shop and where the final bomb was. As I waited for Green squad to get into position, I could hear the bomb beeping away happily in the next room. As soon as Green said they were ready, I signaled a go and we stormed in, gunning them down like the terrorists they were. Mission success in 4:57, with 28 terrorists dead. 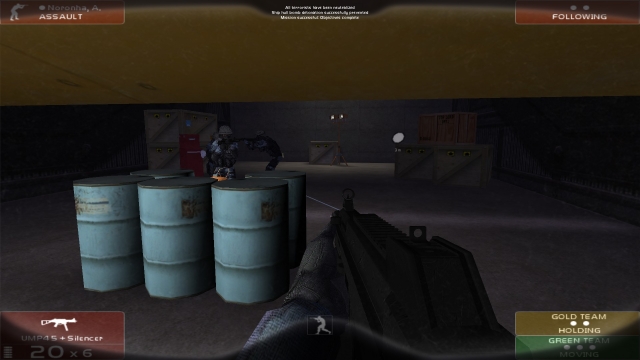 I'm no explosives expert, but how big could that explosion really be?

Next up, it was 10th of March and we were heading for the airport for Operation: Falcon Hour. A drug bust had gone wrong in Cayman Brac, and several agents had been taken hostage. I was to rescue the hostages and kill the captors. The plan was for three teams to go in, Green team to grab one hostage, Blue to grab two and Gold to run around shooting terrorists. We all had a lot to do

Deploying, we set up at the first go code, before bursting into the ambulance bay. I went into the rooms on the ground floor and shot a few terrorists in Hawaiian shirts. Things were good as I went out to the next door, but was interrupted by a hostage being killed. As I waited for the mission to fail, we were fired upon by some more terrorists in a room upstairs, so I knew that I would have to keep an eye on them. Mission failure in 1:08 with eight terrorists dead.

We redeployed, and this time upon entering the bay Gold squad entered through a second door, before heading off upstairs. I led Blue squad into the lower rooms and killed the terrorists, and Gold squad killed the terrorists upstairs before I was outside. By the time I reached the next go code, one of the hostages had been rescued, and as I progressed through a hanger I found only dead terrorists. I must have been lagging behind due to the fact that I said go before we had picked the lock.

We went through into the main terminal building, and the main reception area. Unfortunately, one of the terrorists behind a table got lucky and shot me. My teammate killed him before I assumed control of her, and led the other surviving member upstairs. Quite by accident, I told them to open the door at the go code, which they did and took out the terrorists inside.

Scooping up the two hostages, I led the way towards the extraction point. Opening one door, I spotted a terrorist’s gun - then shot him in the face as he came into view. We were otherwise unopposed as we headed for extraction, arriving in good time. However, the mission wasn’t over, but my waypoints were. There were still terrorists - how many, I couldn’t say. 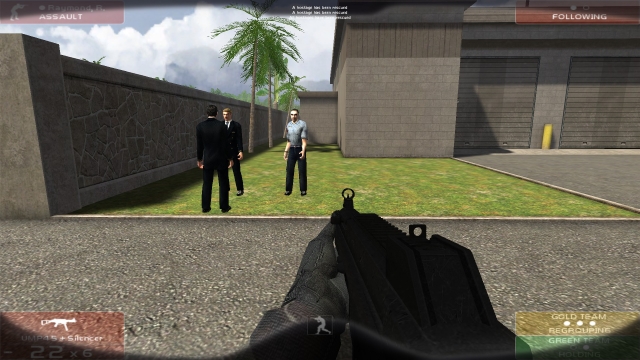 Heading back towards where I found the hostages, it took me a good few minutes of searching around before finding a terrorist in a stairwell. I also heard a shot from somewhere else, just before the mission ended, so there must have been another one. The mission was a success in 10:17, with 28 terrorists dead and two RAINBOWs incapacitated. That, of course, meant that I had to restart the action…

Things went the same as before, even down to me forgetting to unlock the door before giving the go. However, in the terminal there were two terrorists behind the table, both of whom I shot before they could kill me. I took a different route to the staircase, spotting an errant terrorist - stood mere metres away from a RAINBOW who was supposed to be guarding the area. I shot the terrorist and shook my head.

We went upstairs, and I once more had my squad open the door to the hostage room, where they cleared the area before I went in and grabbed the hostages. Less than five waypoints later, I opened a door and shot a terrorist - ending the mission. Success in 4:17, with 28 terrorists dead, all RAINBOWs accounted for.