Having taken a month off, sunning ourselves in the Cayman Islands after our last mission, our work in the area wasn’t done yet…

Heading to a private estate on Cayman Brac, we were liberating some police officers, who had been taken hostage by narco-terrorists. The owner, Nikola Gospic, was out of the country. There were two hostages, so we were to grab them and kill every terrorist present. The plan had us in two teams, who would be clearing the bigger rooms together, and the smaller rooms separately. Deploying into some lovely weather, we made our way up past a boat and up some stairs. Looking in through some windows, I spotted two relaxing terrorists who I shot. Pleased with catching them unawares, I was then myself caught unawares as I passed a corner and was shot by another terrorist. My team killed him before I resumed command of the squad.

Green squad set up at the closest door, while I went around to another entry. I hit the go code and we went in, with Green squad blowing the doors open. We shot a few terrorists, not counting the two who lay dead in the lounge where I had just killed them, and moved on. Heading upstairs, we cleared out some of the rooms before Green went off to collect the hostages, and I cleared a route for them.

At the next go, I shot at a terrorist who ran into the pool house before we killed him, and someone else came to investigate as I led Red squad down towards the pool. By this point, Green squad had blown another door open, and a few moments later the mission was complete. 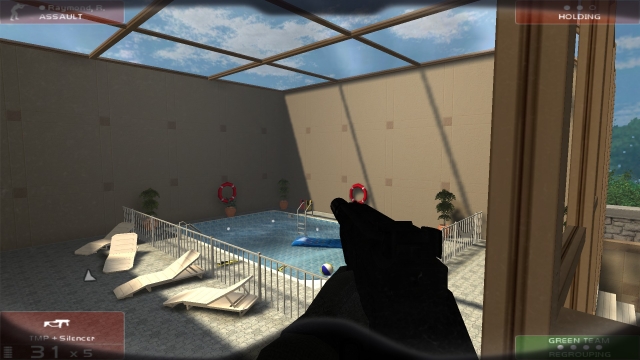 I was not allowed in the pool

It was a nice, clean mission with success in 4:10, with 19 terrorists killed and one RAINBOW incapacitated. I decided to say farewell to Jorg Walther and accept those terms, if only because the recent month-long holiday had made me dislike him. He was always taking the deck chairs…

Almost a month went by, and 17th May saw us heading to Pilar, Argentina for Operation: Crimson Hook. Three hostages had been taken in a meat packing facility, and I still had no idea what most of this had to do with the Nazis from the game’s opening cutscene. Luckily, the pieces were falling into place for John Clark and Kevin Sweeney. The managers at this particular plant were given their jobs by one of the shareholders - Nikola Gospic. Incidentally, Gospic was linked to a far-right Venezuelan politician, who was himself linked to the terrorists in Switzerland from Operation: Cold Dagger.

On a secondary note, the terrorists that had taken over the meat packing plant in Pilar, had echoed demands that we had heard in Operation: Sentinel Wolf. Soi John and Kevin were seeing links all over the place. Finally worth noting, the Newswire during my briefing had stated that the two terrorist attacks on Cayman Brac had taken place a day apart, and the Pilar operation was the very next day… Here, there and everywhere

The plan was to systematically clear our the meat packing plant as two teams, much like how we had just tackled the op at Gospic’s house. We deployed, and Green squad waited at the front door while I went in to give them the go code. I was supposed to throw in a smoke grenade, but I didn’t, and we killed a few terrorists.

We continued through the facility, meeting up at the next go code before heading our separate ways once more. I led Red squad to clear out one area, and a member of my team shot a terrorist in a control room that I hadn’t realised was there. From there, we headed up some stairs and to the next go code. Once Green squad were in position, I led the charge into the first room with a hostage. I shot the man next to him, then the hostage himself. Mission failure in 4:28, with 15 dead terrorists… 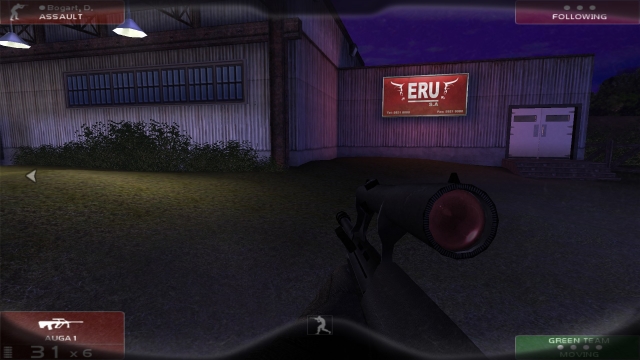 An obvious front - the phone and fax numbers are the same!

Telling myself to not bloody well do that again, things went pretty much the same way, except that I shot the man in the control room, and we met a terrorist before the stairs who wasn’t there previously. Heading up, I remembered not to shoot the hostage, and we hurried over to grab him. After telling him to follow us, bloody began flying everywhere as my men opened fire on the hostage. Before I knew it, a terrorist down one flight of stairs was dead, as well as one of my squadmates, and two of us were wounded. Miraculously, the hostage had survived despite my being certain that most of the blood was his.

Heading downstairs - cautiously - we followed a weirdly circuitous route before we reached another go code. I had to throw a flashbang, so I prepared it and hit the go code as I threw it. Into a wall. I turned and got as far as the 30cm or so space I had could go as it went off, before being informed that the mission was a success. It had taken 4:53, and 22 terrorists had been killed. We had one KIA and two wounded RAINBOWs, so I said goodbye to Jamal Murad and carried on with my life.

The 10th of June rolled around, and we were being sent to Brazil. I could practically guarantee that it wasn’t to look at that Christ the Redeemer statue, but that’s mainly because we were going to Porto Alegre, not Rio de Janeiro…