After rescuing Dr Winston and planting a bug on Anne Lang’s phone, we knew that we had four days to stop a bio-weapon…

That’s where Operation: Deep Magic came in. The Horizon Corporation had information about all of the activities of the Phoenix Group, and I was to sneak into their offices to retrieve said data from John Brightling’s computer. I figured taking a single specialist would be safer than risking a team, after my previous operation proved what a liability they were for sneaking. My plan was fairly simple, down routes that would avoid cameras and the guards - plus I would pack a heartbeat detector as well. 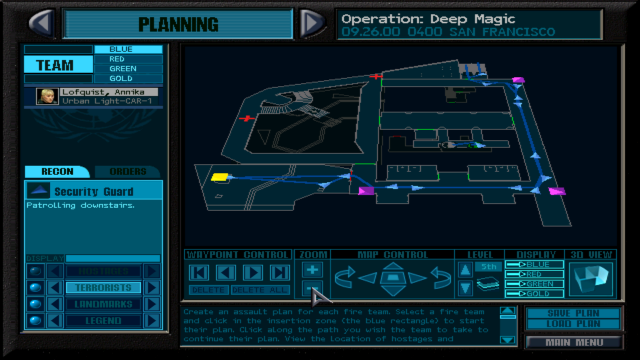 As you can see from the little bit of blue in the middle, I had a few floors to travel

Deploying on the roof, I took one of the doors into the building and went down some stairs, and a couple of ladders. I picked the lock on the door and waited for someone to walk past, then went into the security office to disable the system. I opened the door to leave and saw someone, but he must have seen me too as the mission failed at 2:58.

Heading back into the action, I went the same route and disabled the system, then waited for the guy to pass by checking my heartbeat sensor. I snuck my way around to a staircase and went up to the next level where the office was. Spotting someone on my heartbeat sensor, I waited in the stairwell to check out the patrol route for a couple of passes. Once I was sure that I could get past unseen by heading left, I snuck out and hurried down the hallway - periodically checking the heartbeat sensor.

Once I picked the lock on the office and went inside, I took a breath and hacked the computer. Two objectives down, I cautiously made my way back the way I had come. I waited at the far end of the hallway and waited until I spotted the guard appear at the far end, and hid. He came close enough to be picked up on my heartbeat sensor, so when he turned and started back the other way, I made my move back to the stairwell. From there, it was a simple matter to get to the extraction point on the roof. Mission success in 8:56. 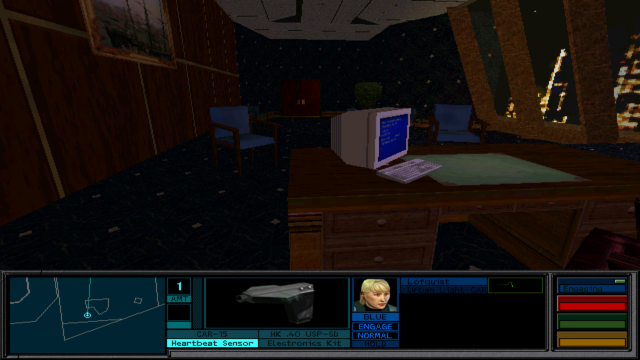 Not sure of the operating system used here

The briefing for Operation: Lone Fox didn’t exactly fill me with confidence, as I was told that I should be careful who I took - other operations needed to be carried out before the squads could be retrieved. It made sense - time was running out - but I didn’t like being limited.

The mission was to kidnap Bill Henderson, the head of Global Security operations. Yes, it turned out that the people behind the security at the Sydney Games were involved in this whole “poison the world” plot. His motorcade was being blocked, and I was to kill his security team and escort him through a couple of choke points to extraction. My plan amounted to basically a straight line for Red squad, and the same for Blue apart from a slight detour to actually grab Bill.

The operation began and - believing that Bill’s car would already be stopped - I hadn’t given Red squad a go command. They tootled off, and I was left to my own devices as Reserve1. Believing this would be fairly simple, I had brought Alejandro Noronha along - my wounded team member. So, when the motorcade arrived, we were caught basically unawares, and the security murdered us both. I took control of Red squad, but someone I couldn’t see mowed us down as we ran back to grab Bill, failing in 1:37. 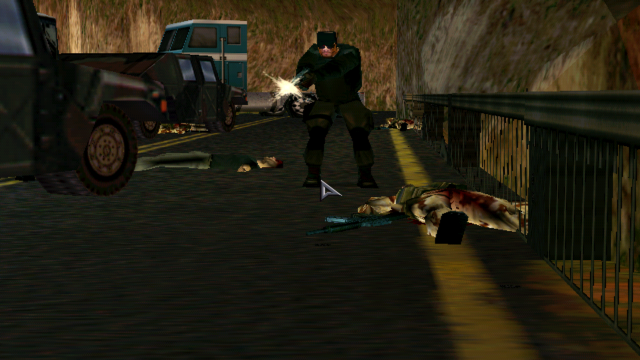 Back to the plan, I put in a go command, and hid in waiting for the motorcade. It arrived, and we killed the security team before grabbing Bill. We joined Red squad as they headed along the road, clearing out any reinforcements. We managed to reach the extraction point without much trouble. Mission success in 3:21, with nine terrorists killed.

Control and John Clark then explained Operation: Black Star. This was taking the team back to Brazil, where we had to rescue some hostages. It turned out that Anne Lang, whose house we bugged, was one of the hostages and this was all part of the plot. Her “kidnapping” would explain why she wasn’t around for the bio-attack - but the other hostages would be killed. Once more, I was told that any team members heading to Brazil wouldn’t be available for further operations and I should plan accordingly….