This is my ongoing exploration of Tom Clancy’s Rainbow Six series, played in release order, where I will chronicle my playthrough like a text-based Let’s Play. This time I continue Tom Clancy's Rainbow Six 3: Iron Wrath.

After mopping up some police naff up as well as foiling a nuclear material theft, we were leaving Bulgaria…

Operation: Dagger Harness opened on 16th September 2007, proving that all of the missions in these expansions happened about two weeks from each other. We were headed to Mirola, Poland, to a terrorist training facility. We were to rescue hostages - three nuclear scientists - and although it wasn’t one of my objectives, John Clark told me to capture the one running this whole operation. Maybe he didn't really want me to capture the guy

The action plan (installed from ModDB) called for three squads, with Gold squad on overwatch from a sniping position. Green squad were to go right, I was taking Red squad left. As we deployed, I was treated to a cutscene of a drone doing aerial reconnaissance at 7pm. As the briefing was at 6:30pm, that finally confirmed briefings were held shortly before deployment. Which made timings in some of the game’s previous operations really not line up…

We deployed and headed out in our respective directions. Gold and Green squad started firing shortly after arrival, but I had to go past several dilapidated buildings and a target range before I spotted a terrorist at the top of a building and shot him. One of my men shot a second terrorist in another building and we moved on.

Things were pretty quiet, though the plan did call for me to throw a smoke grenade and proceed through a section devoid of terrorists. We approached what seemed to be the main building, as it had two staircases leading up to it. Entering, the plan called for tear gas which I threw into a room containing a single terrorist who had been looking straight at the door when it opened. One of my men shot him, and I heard them complain about the tear gas as we went through the room. 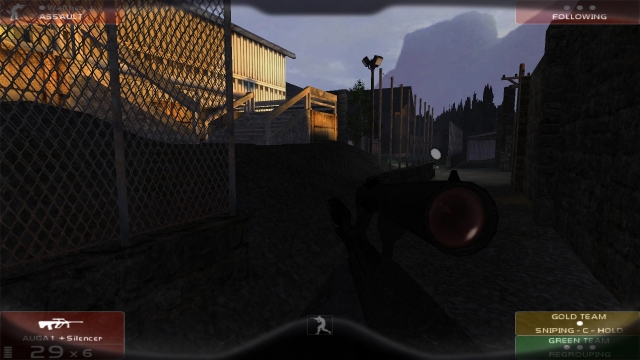 Wimps, it was only tear gas!

There was one more terrorist, this one inside a large room with the hostage. We shot him, grabbed the hostage and left the building through a back door. My men started firing at someone that they could see through a window, but a timber beam was blocking them. Backing up and zooming in with my scope, I shot the guy and continued down the slope and around the corner, where my men shot another terrorist.

Entering the building, we headed upstairs to find the terrorist whom I had shot through the window, who was guarding a hostage. We grabbed him and headed back outside, making our way back towards the extraction point. This included heading inside another building and shooting a terrorist, then grabbing the third hostage.

As we made our way back to the start, I noted that Green squad had been “regrouping” for a long time. So, when we came across them faffing around, I walked into the two who seemed stuck on something, prompting them to join their squad leader and continue along their route. When I reached the extraction point, the mission ended. Mission success in 7:12 with 18 terrorists dead. 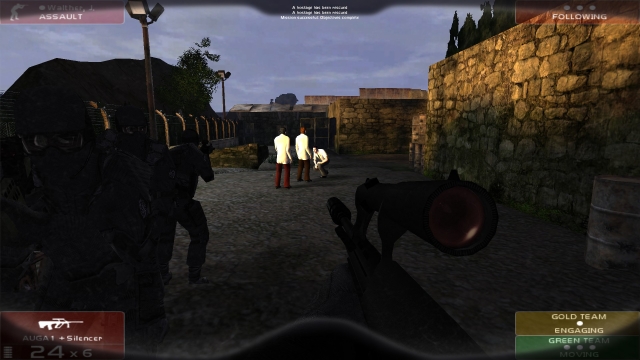 13 days later, Operation: Tower Shark began. It was now 29th September 2007, and we were headed to Constanta, Romania. We were hitting a warehouse which intel believed had several hostages capable of building nuclear devices. The terrorists/kidnappers were loading a cargo ship, which was scheduled to leave that night - luckily the briefing was taking place at 8:15am, so we had plenty of time. We had to get in, rescue the hostages and secure the terrorists’ computer.

As there were “approximately 25 tangos”, I hoped that the plan didn’t include wading into too many groups across the facility. It had Green squad heading left and Red squad going basically straight before heading into the main warehouse. We deployed and split up. Yes, that car-looking thing is a forklift

After passing a forklift and some shipping containers, we had already shot a couple of terrorists. It seemed that, as intel suggested, the area was rife with them. They were up in windows and hiding between containers - but only ever one at a time, which certainly helped with our silenced weapons. We went alongside the cargo ship for only a few meters, finding two terrorists almost close to each other, before heading into a porta-cabin. But first, I shot the terrorist inside through the window.

Grabbing the hostage on the way through, I realised that we’d lost a squadmate outside, his little white dot on my HUD now blanked out. With the hostage in tow, we crossed over to the main warehouse, where I shot someone just inside, and reached a go-code. After waiting a few moments to see if I required Green squad, I called it and went forth. Whilst I was checking the map, my squadmates had shot two more terrorists, so the way was clear for us to head upstairs. 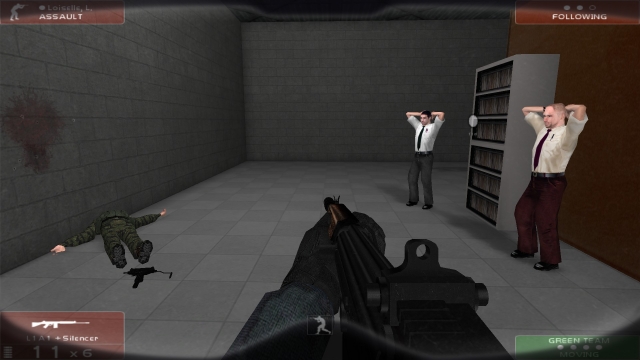 In one of the rooms at the top, we shot two terrorists who were holding two hostages. As I went around the corner to grab them, I spotted a third terrorist - then my squadmates shot him. I was relieved about that, as I’d most likely have shot a hostage… With our three hostages we continued through the warehouse, and Green squad confirmed that they had the data from the laptop. My men got into a firefight with a terrorist that I couldn’t see as we reached the bottom of a staircase, but by the time we reached the outside it was clear sailing. We passed Green squad and went straight to the extraction point.

Mission success in 5:35 with 25 terrorists killed, and one RAINBOW incapacitated. I called it a win, as Timothy Hanley would probably live. Two and a half weeks later, Operation: Radiant Haven began, hopefully clearing up the final dregs of this scientist kidnapping scheme. It was 17th October 2007 and we were heading to Sevastopol, Ukraine, where intel had located the last of the captured scientists.

John Clark warned me that these weren’t students from the training camp, these were professionals - and mind the staircases. Great job, John. Curiously, despite the graphic showing some kind of complex, Kevin Sweeney claimed that it was a “nice-looking place” and called it a house. Perhaps the bit I could see was a greenhouse, not some kind of light aircraft hanger. We deployed in two squads, with my Red squad taking the front entrance, and Green squad taking the back. We entered through the garage, my squadmates shooting at someone that I couldn’t see, and I shot a terrorist as we exited out through the side of the garage. Around the side of the house was the sunroom, which immediately got de-glazed as we shot the windows out to kill a terrorist inside.

Up some stairs just inside, we went out to a balcony and shot another man, before going in through his bedroom and into the landing, where I shot another guy. Somewhere before this, one of my men had been shot, but was still with us. We went in a quick circuit, before arriving at the first go-code, which I once again assumed wasn’t for a combined attack, so hit it and went through the door. 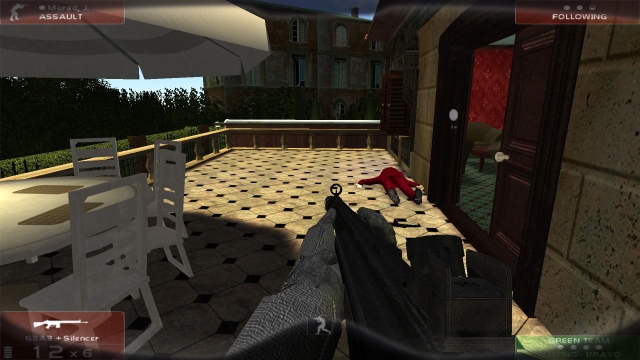 He deserved it, I imagine it wasn't easy getting this patio furniture up here

We were in a large room filled with paintings, a piano and a bar - as well as a couple of terrorists. Those two died easily, but I was worried for a moment when I realised that the hostage in the adjoining room was with two terrorists. Thankfully, my men shot them. It was about this time that I realised that Green squad were waiting for a go-code, so I signalled it. Then, moments later, they wanted the same go-code. Several seconds after giving it, they wanted the Charlie code, which I had hit before entering the music, art and stained glass windows parlor.

I gave the go-ahead and continued along my way, crossing paths with them a few times as I wove a path back upstairs. I had noticed some thudding music earlier, and now I was finally going towards it. The person who was presumably listening to it exited the room and we shot him, before briefly checking the room and continuing. Heading upstairs, we shot a couple of men as we entered a room, finding two hostages guarded by a third terrorist. Pulling my trigger with the barrel aimed squarely at the terrorist, one of the hostages dropped dead - killed by one of my squadmates. Mission failure in 4:55, 16 dead terrorists, one dead hostage and a wounded RAINBOW.

With a sigh I redeployed, and things went the same, except for the wounded squadmate, right up to the parlor. After waiting for several long seconds to give the go-code, I opened the door to be ready. So my squadmate shot one of the terrorists inside. With a silent curse, we stormed in and shot who we could, but waited while Green squad got into position and I gave all three of their go-codes. We passed each other, and carried on as before. 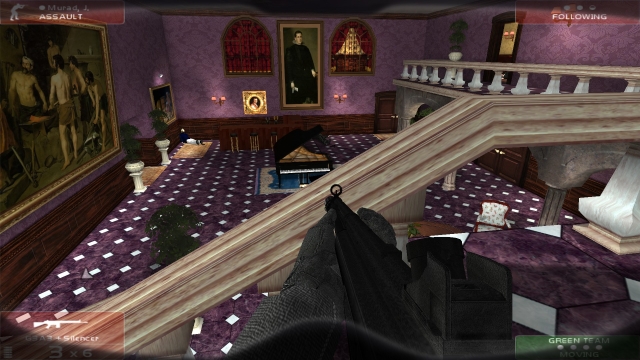 Heading upstairs, I decided to check Green squad’s route on the map. They were going to hit the same room with the hostages in that we were. So, I waited for them to get closer, whereupon they shot two terrorists and I went in. As the door opened, one man surrendered and I didn’t shoot him, and before I rounded the corner the final terrorist was shot by Green squad. Mission success in 6:38 with 18 terrorists killed.

A much better ending, which meant that RAINBOW was that much stronger heading into the next operation. But that was almost a month away, though it would mean remaining in Ukraine, as that’s where we were still needed…