We had rescued the presidential candidate for Venezuela, then gone after his corrupt campaign manager while he himself was elected and secretly corrupt…

But we had chemical weapons to find, so Operation: Meat Packing Plant took us to 2nd of February 2008. It was the third mission in a row which was taking place in Caracas, so we were getting to know the area well. We deployed in what appeared to be an abattoir with a bunch of cattle pens, but what appeared to be only one entrance or exit. We made our way slowly and quietly, as I had learned the usefulness of being slow in the previous mission, through the facility. There were a handful of enemies as we went, going past some hanging carcasses and easily avoiding an ambush from some rolling shutters. John Clark came through on comms, saying that the heat signatures suggested that two hostages had been taken, so we had to rescue them before we went looking for chemicals.

The plant was the opposite of a maze, with very clearly only one route through it and the only surprises being the odd terrorist stood behind a window here or there. Most of them were shot before they knew we were there, which was a decent change of pace.

As we approached the first hostage’s position in what appeared to be a store room, we came under fire and I stepped out of the way of the plastic flaps covering the door. I wanted to let my team score some kills, after all. When the coast was clear, I went in and shot someone hiding behind some shelves, and we came under fire from someone near the hostage in an elevated room. The team shot him, then we cuffed the hostage. Clark told us to find the second hostage, and we went on to the next part of the mission. 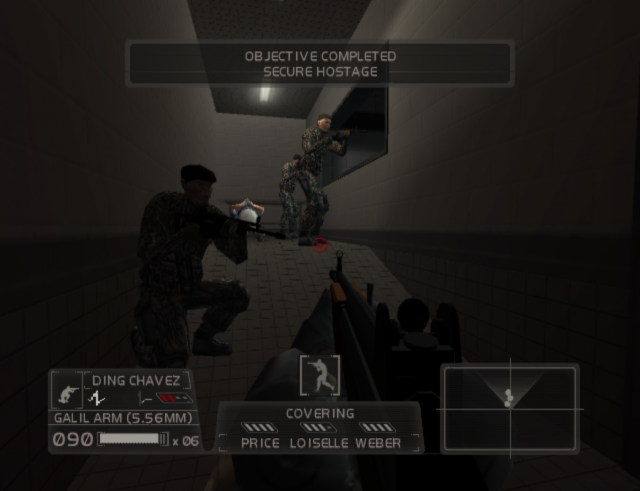 What even is the point of this room?

We entered a room which was very obviously a trap waiting to be sprung. Sneaking in, we waited below the gantry above where the enemy was going to shoot us from, and I spotted a terrorist with his back to us. As I shot him, a grenade fell down from above and the trap was sprung. Luckily, we weren’t too far from the door we entered through, so I took us back outside and waited for the enemy to come to us. One remained above, however, so after shooting the terrorists on the ground I had to risk getting shot so that we could deal with him.

We went around through the canteen, where one terrorist was cowering, and upstairs. The hostage was just outside the control room we found ourselves in, and surrounded by enemy forces. I had hoped my men could deal with them, but I had to take a couple of tricky shots myself because obviously not. 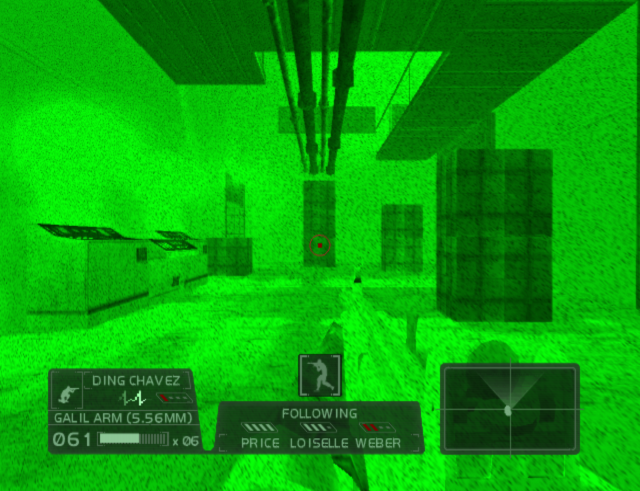 The night vision is better in practice than screenshots...

Heading downstairs, I had to activate my night vision goggles as it was so dark. To the right a shutter opened and two men came out, one-by-one, allowing me to shoot them. Exploring a bit to the left, I came face-to-face with a rocket launcher and the man holding it, so shot him. Back to the first shutter, we followed a hallway and went down some stairs. There wasn’t much resistance left, and we reached the chemicals that we were looking for. Mission successful with 42 dead terrorists.

Operation: Garage had us going to New Orleans, two days later on 4th of February 2008. Emilio Vargas had been spotted by customs, arriving on a ship filled with custom cars. Intel suggested the cars had the VX nerve agent in them, so Vargas was followed to a garage where we were to apprehend him.

We deployed outside the building, just me and Louis Loiselle, and I had him flashbang the next room while I cleared the locker room. There was a man in there, but not in the other room, so I shot him and joined Louis. I shot a terrorist in the showroom through the window, and whilst looking for others to kill a rocket whistled through the broken window and blew me up. Mission failed with two terrorists dead. 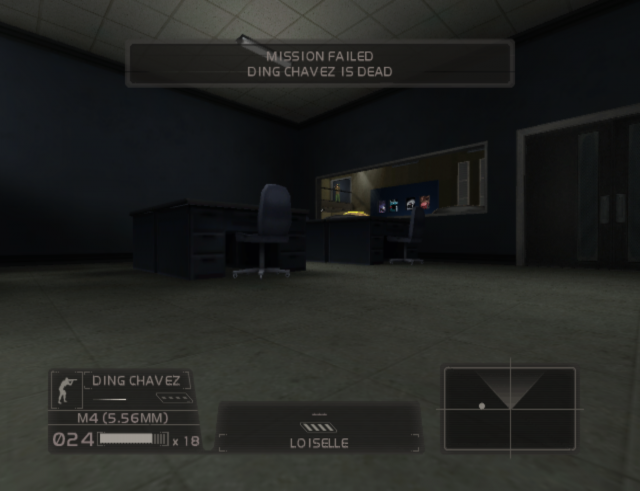 Redeploying, I didn’t send Louis first and took out the guy who was changing. Together, we went into the next room and while I was lining up a shot at the one guy I could see, a rocket blew up the window in front of me. I took my shot, then changed position to get closer to the window, and used the cover of the window frame to shoot a handful more terrorists.

With the showroom clear, we went through and to the upper level, then followed the hallways until we went back downstairs to the breakroom. Surprising a man as he came towards the stairs, I shot him in the front, then the back as he legged it. There was an explosion and a shout, so I went slowly forward and found a man with a gun who I shot.

Moving on, I heard someone and leaned out to look only to be fired at by three terrorists! However, as they were grouped together, I just laid on the trigger and killed them all. There was one more in the back, then it was on to the next part of the mission. 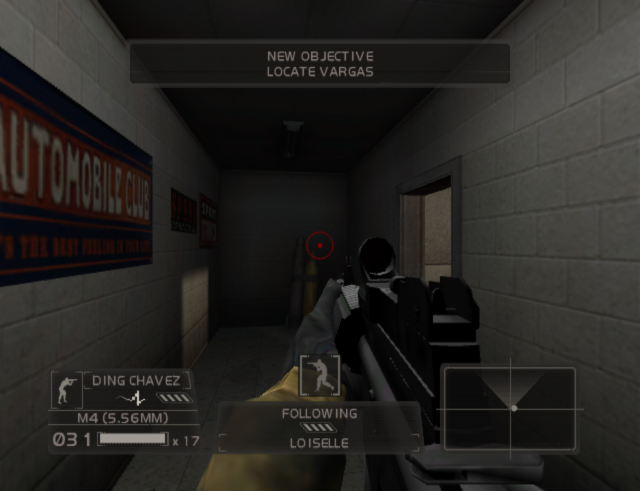 What was the old objective?!

The workshop in the next area was teeming with terrorists, none of whom managed to land a shot on us thanks to the obstacles in the way, and an unwillingness to aim their weapons above them. As we entered the next workshop, Vargas ran for it. He was easy to spot, as he was wearing salmon pink trousers, but as he was running, we had to as well. We couldn’t let him escape, Clark was telling me as I ran.

Obviously, we came under fire from his men and had to work our way through them. Luckily, Vargas kept stopping in each section, giving us time to fight through to him. Until he didn’t. He ran for a car, and I was almost shot in the back, but we got outside just in time for me to shoot his driver, making Vargas surrender. 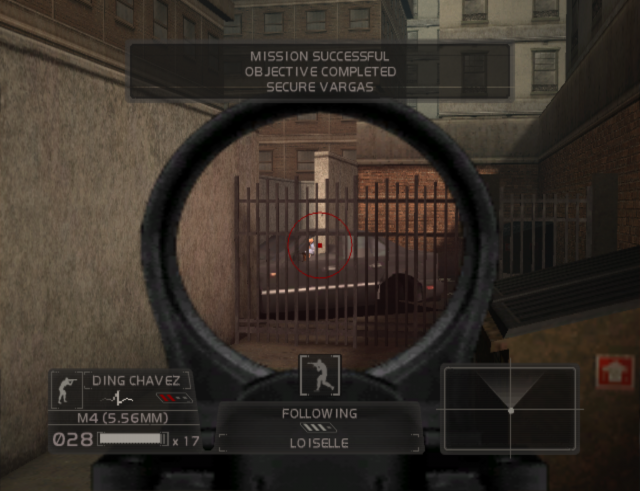 According to Clark, no sooner were the handcuffs on than Vargas was spouting off about how this was all Crespo’s idea. The president planned to stop selling oil to America and make it look like Saudi Arabia’s fault, while actually still selling the US oil through the black market. What that had to do with this VX nerve gas attack was anyone’s guess…

But we had the location of the VX, which had been in the car radiators. They were hitting Mardis Gras which, as luck would have it, was tomorrow…!