We had completed a duo op before waiting 80 days to help our squadmates who had done their own duo op, but then somehow time traveled back to December the previous year…

Yes, it was 20th December 2007 when Operation: Alcatraz began, with Venezuelan presidential candidate Juan Crespo touring the island prison. Of course, he and his tour guide were taken hostage by some terrorists during his visit, so we were headed in to rescue him. We deployed at an entry to the sewers, though only a short way in it was clear that this was a guarded point of entry. However, as the terrorists appeared from well telegraphed positions, I was ready for them all. I may have been shot once or twice, but that was their fault for rolling into position every time. Heck, I spotted a barrel which I blew up, killing at least one man before he knew we were there, that’s how unsurprised I was by all of them.

After going through a couple of doors and up some stairs, we were in a dilapidated shower room. As my objective became “secure shower room”, I knew I was in for a fight. Leading my team to the rear, I kept an eye on the upper level on either side. Someone called “here they come!”, and sure enough the enemy forces descended on us.

We took some damage, but were relatively fine after we’d repelled the enemy forces, so headed through a door which they had just opened. We received intel that the tour guide was being held in the infirmary, and moved on to the next part of the mission. 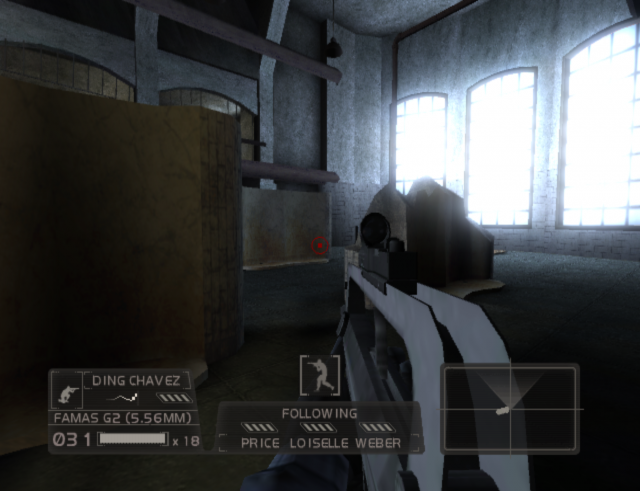 The shower stalls may have suffered damage

It turned out that the hostage wasn’t in the infirmary at all, he was in the cell block ahead of us. I carefully shot the terrorist guarding him before things kicked off. Leading my men into the open, they shot the half dozen terrorists who came rushing out to meet their bullets. Once the area was clear, including one guy behind us, I had the squad cuff the hostage, then went upstairs through a door. The way ahead on the ground floor was blocked, so we had to go up and around it.

We were fired upon from another man behind us, but he was dispatched without issue. After going back down some more stairs and through a door, we were confronted by a choice. Open the big doors ahead, or the small door to the left. We went left, which led up some stairs and overlooked the dining room below. After ordering my men to use the door ahead, I opened fire on the terrorists below.

Once the room was clear, we went down and I ordered the hostage - Crespo himself - handcuffed. Mission successful with 37 dead terrorists. This terrorist cell was absolutely massive… 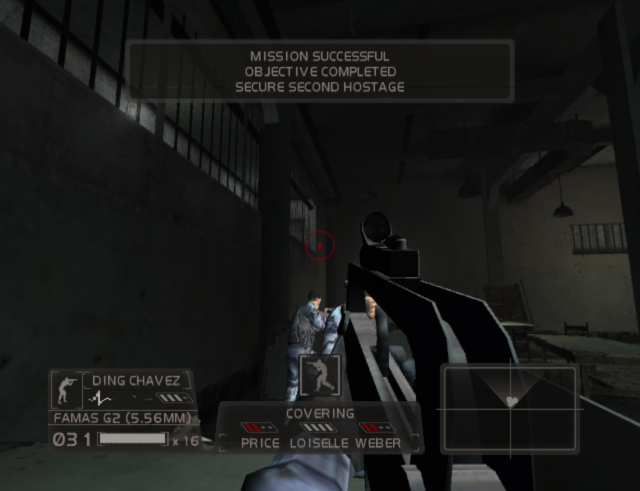 Crespo was debriefed and revealed that his campaign manager Emilio Vargas wasn’t there. Intel worked out that he was probably behind this whole thing, as they looked into his bank accounts and found something interesting. Some bank which was hit in Boston had evidence of his ties to terrorist slush funds.

So, for Operation: Import/Export we were headed to Caracas, Venezuela to check out a company owned by Vargas. It was 9th January 2008, so just over six weeks until we were due to rescue two of my squadmates in Italy. I was still unsure how these missions would tie in with that one.

We deployed outside the building and were told to minimise the bodycount. Upon opening the door, four men ran to try and shoot us, so had to die. Another opened fire on us as we explored, but ran. He soon popped back up, along with a couple of others who all died to our weapons. 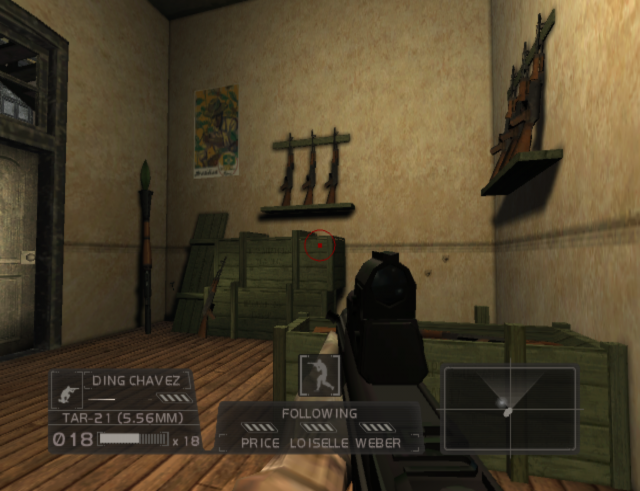 The back room was full of guns, so with everyone now dead, that was classed as “secure” by John Clark. We went outside and came under fire from a couple of men on rooftops, though one was obscured from me by a tree. Opening the door at the top of the stairs we took, there were a handful of men in there who somehow managed to not only miss me, but grenade one of their own men. The others fell to our mighty gunfire, and after going through we were in the next part of the mission.

Opening a door, I was surprised by a terrorist who shot over my head. After shooting him, I waited for the guy across the way to empty his clip before shooting him, then a guy on the ground floor. For good measure, I shot an exploding barrel too. Leading the way left, I shot several people and a barrel before heading for the next door. So far, this had been a very simple mission as they were unprepared for us.

We went downstairs, clearing as we went, and found the documents we needed. Then Clark, who again had told me “we don’t want a body count”, told me to secure the facility. Unless they all surrendered and allowed us to handcuff them, that definitely meant that we had to shoot everyone. 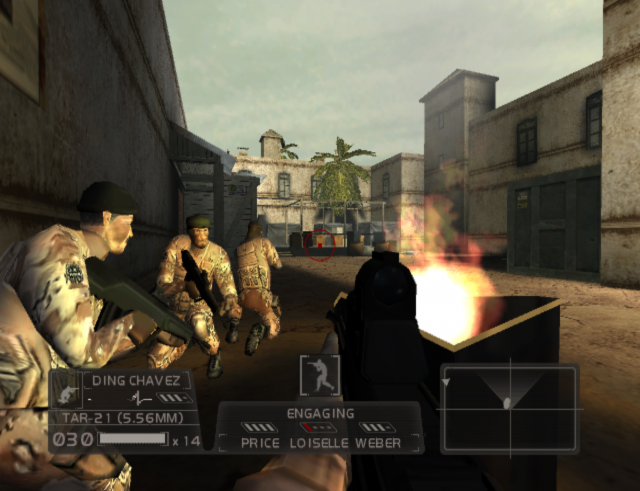 Going outside into an open area, I shot a few people before snipers began firing at us. We killed them, then a guy hiding behind some crates, before going to a sliding shutter. It opened, and we very carefully and easily shot everyone inside as they came into range.

After going through the shutter and into the warehouse, we found some barrels with a biohazard symbol on - and Clark told us the mission was a success. 48 terrorists dead, though maybe they legitimately worked there and I’m just judging them for defending their jobs with grenades and automatic weapons? 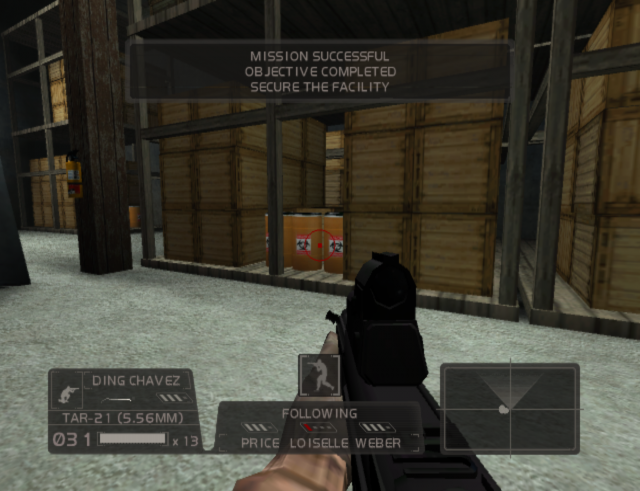 And these hazardous chemicals were for personal use only?

Clark said that Vargas was probably going into hiding, so just in case I was to go into his penthouse suite and plant some bugs, solo… Operation: Penthouse kicked off two and a half weeks later, on 28th January 2008. Surely by now Vargas would have contacted whomever he was going to, so this was pointless…

Clark said that he would be putting the enemy positions on my map, so I kept an eye on it as I crouched and snuck my way painfully slowly through the hallways. I avoided two blips, despite accidentally discharging my weapon into a wall, and through the living area. There was a man watching static, so I’m not entirely certain what that was about, but it distracted him whilst I nipped past and up some stairs which were in the kitchen area. Following the hall, I found the phone and planted the bug just before someone walked past. 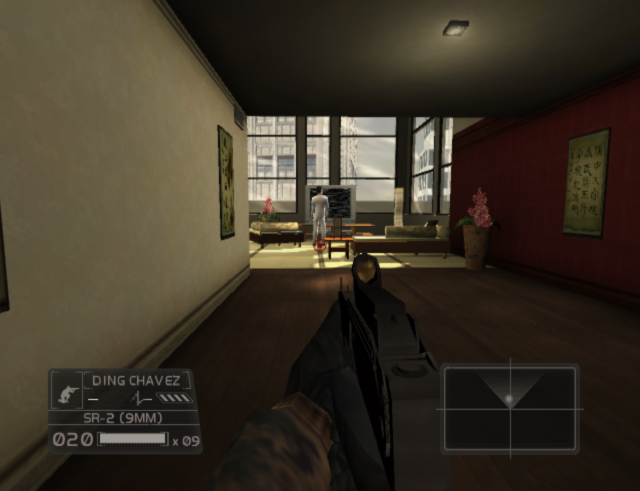 One can assume he was watching Everybody Loves Hypnotoad

Once the coast was clear, I made my way towards where the laptop was supposed to be. Unfortunately, I got too overconfident and leaned around a corner to see exactly where two blips on my map were. They were right in front of me.

The mission failed, and I had to redeploy from the start. Things went the same as before, slow and steady, except this time the two men didn’t stop for a chat. The office with the computer had two terrorists and one man with his hands behind his head. Obviously, it was impossible to plant a bug with an audience, so Clark told me to head for a second terminal in the master bedroom.

Creeping past the office and upstairs, I avoided the man on the right and entered the bedroom on the left. There was someone inside, but I managed to evade him and get to the laptop, planting the bug. However, this wasn’t the end of the mission. The phone bug had already gathered intel - the hostage in the office was the accountant, and needed rescuing. Weapons were free. 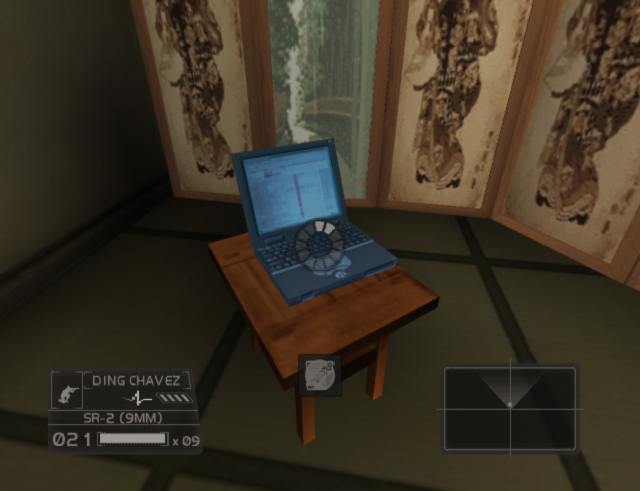 At least this laptop being full of spreadsheets made sense, I suppose

After swiftly dispatching the man in the room with me, I cleared the upper floor and moved to the stairs. I was spotted before I could shoot the man at the bottom, which put the others on alert. After shooting my way into the office and grabbing the man, I was told to get him to my infiltration point on the roof and had to fight my way back out of the office.

Luckily, two of the men from downstairs remained in position - the guy at the TV and one of the men in the kitchen. As such, they were easy to shoot from my position looking through a hole in the wall. Leading the hostage downstairs and back the way I had come, I heard a terrorist speak from a room which I hadn’t been in, so I waited for him to come out before shooting him.

Together, me and the hostage went up the stairwell and I shot the man at the top. Opening the door, I was face-to-face with another guy and shot him too. I led my charge carefully to the extraction point, where a helicopter picked us up. Mission success with 18 terrorists killed. 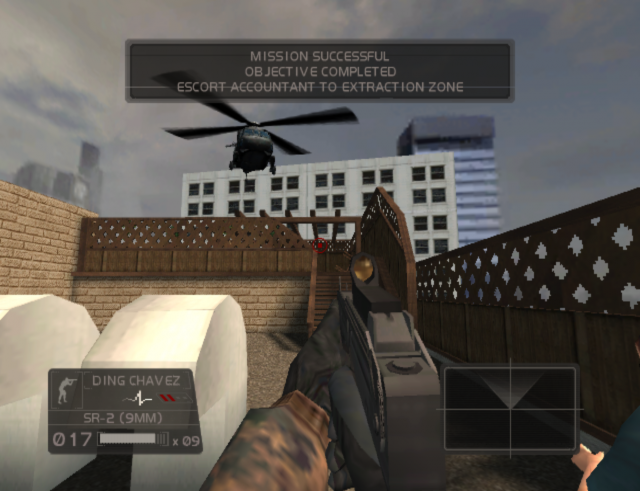 Helicoptering away, like this is a Resident Evil game or something

The accountant pointed the way to a meat packing plant, as the place where more chemical components were being kept for the VX nerve gas Vargas seemed to want to make. Meanwhile, Crespo had been elected President of Venezuela, and we were treated to a cutscene of him making shady deals to create an oil crisis…