This is my ongoing exploration of Tom Clancy’s Rainbow Six series, played in release order, where I will chronicle my playthrough like a text-based Let’s Play. This time I continue Tom Clancy's Rainbow Six 3: Athena Sword Diaries.

It appeared that the work Gospic had begun in Argentina was still in progress in Europe, but so far we were on the case…

It was 19th July 2007, almost two weeks since the previous mission, when Operation: Proud Flag kicked off. We had to head into the old city section of Dubrovnik in Croatia, to rescue an arms dealer. More specifically, the fortress of St. John. We were on a time limit, as the terrorists would likely kill the nameless arms dealer as soon as they had finished interrogating him. As this guy was our next link in the chain on these neo-fascists, we kinda needed him. Actually, he was only nameless as far as I was told by John Clark & Kevin Sweeney. The two word objective was “Rescue Bagattini”, so that was probably his name. A little bit of crossover

We deployed on the fortress’ battlements near a cannon, and split up. Green and Gold squads went left, I went right with Red squad. We went down some stairs, and one of my men shot a terrorist who came into view. I won’t mention the go-codes in this summary, due to the sheer amount of them used. It was apparently only four per squad, but I had to hit the keys more than that, and Gold squad appeared to get stuck at one of them…

Following the waypoints, I could hear the other two squads engaging enemies. We encountered light resistance as we weaved in and out of buildings, trying to find Bagattini. Along the way, a member of Gold squad was gunned down.

We went through a courtyard with a well, surrounded by columns, before entering a main plaza and overhearing a member of Green squad had also fallen. There was a statue in the middle, but we stuck right, sneaking into the building via a locked door around the side. The house had several enemies inside, and after entering the door near the top of the stairs we found Bagattini. 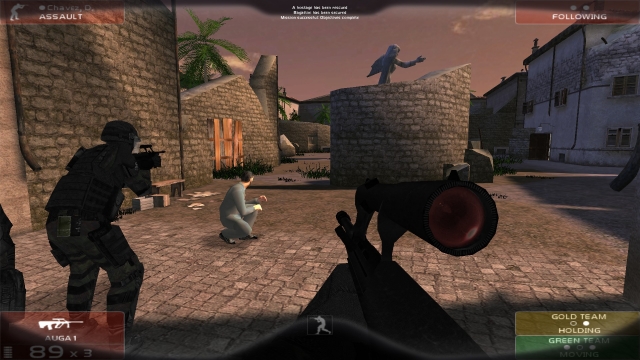 Pictured here with the statue

Grabbing him, we made a break for it - luckily one of my squadmates noticed and dealt with a terrorist who came into the room from another door as I left. We went back downstairs, then out through the front door. We met up with Gold squad, now a single operative, and went straight to the extraction point. Mission success in 5:06, 34 terrorists dead, one RAINBOW incapacitated and one KIA: Andrew Burke, who was wounded a mere two missions ago in Operation: Jasper Heart…

A few nights later, on 22nd July 2007, Operation: Granite Cage began. Bagattini, whose first name I was now told was Giovanni, was being kept in Monaco, but the Hotel D’Erlette safehouse was compromised. Probably because it was a hotel, and where I had already encountered this group when I captured Riccardo Miccini in Operation: Omega Shadow. I was to escort Bagattini to safety and neutralise explosives that terrorists had planted in the basement. Yes, they were sending me in to get him out, rather than telling him to get out with the men guarding him - which suggested that RAINBOW hadn’t assigned anyone to guard him… Also, the Newswire had Croatian Engrish, as the fortress from the previous operation was called St. Ivan, instead of either St. John or Sveti Ivan. Here was the basement, AKA the underground car park

We deployed in Bagattini’s hotel room, presumably not the same one which I captured Miccini in, and the timer read just over three minutes. I couldn’t take my time, which was probably why I only deployed as a single squad. As I opened the door I was greeted by terrorists coming to kill Bagattini, three of them. We gunned them down, then headed out and made our way to the stairs. Several areas were inaccessible, but as I went I couldn’t help notice that they had done a good job of tidying up in the two weeks since we had been here previously.

Nobody was on the stairs, but at the bottom of them was the main entryway where I encountered two terrorists, and the door to the left of me was open. My men and I shot the few terrorists that we could see through the doorway, and made our way into the dining hall. It was full of men trying to kill us, so we laid down fire before going through it and into the back area. We went down some stairs to the right, and I remembered that there was a body stuck in the elevator at the bottom last time, which had thankfully been cleared away by now. 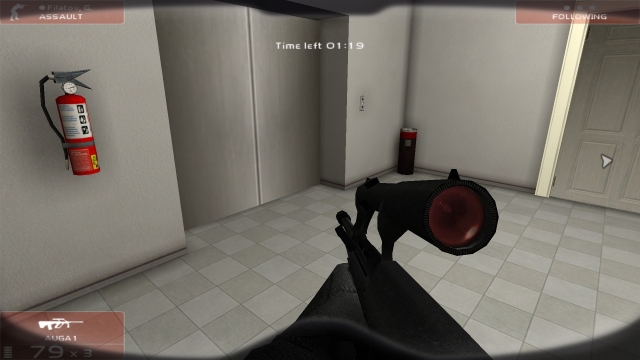 We went through the laundry room and I shot a guy in the back, then another in the face once we reached the end of the hallway. We exited into the car park, with the beeping of the bomb getting louder. It appeared clear, so I set about disarming the bomb with just over 30 seconds remaining. Gunfire erupted, and I could only assume that my men were taking on a horde of terrorists from all of the noise.

But then the hostage died a few seconds before I disarmed the bomb, and I turned around in time to see my squadmates begin returning fire. The sound of the weapons was quite different, so I could only assume Ding Chavez, Karl Haider and Daniel Bogart just watched our civilian get murdered. Mission failure in 2:58, with 15 terrorists killed and one hostage dead. Oh, but Ding got 100% accuracy on his single shot fired, so that’s fine! WHAT WERE YOU DOING GUYS?

We redeployed, and things went the same as before. One of the first three terrorists attempted to flank us, but my men shot him. We went downstairs to the “ambush”, and shot the man in the main entryway before I opened the doors to the dining hall. Most of the terrorists were crowded nearby, so we gunned them down, and I killed the one remaining man who had stayed to the left. We went downstairs, I shot the man in the back, then the other man in the face again, before going into the parking lot. 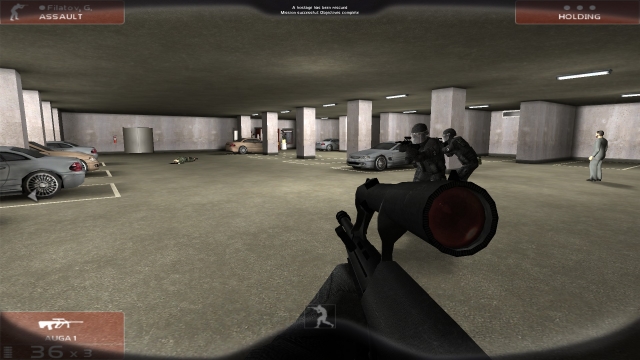 This time I ordered my men to disarm the bomb, while I kept an eye out for terrorists. However, when the two - yes, there were only two - appeared, my squadmates shot them before I could. The bomb was disarmed, and I strolled over to the extraction point. Mission success in 3:09 with 17 terrorists dead.

We had less than two weeks until our next mission, so we decided to have a break in a hotel. No, not this same hotel again, we weren’t stupid. We were off to Pelermo, Italy…