Tom Clancy's Rainbow Six 3: Raven Shield, hereafter referred to as Raven Shield, was released in March 2003 for Windows and Mac, and also ported to mobile (WELL before Android/iOS) less than a year later. It was published by Ubi Soft, and developed by Ubi Soft Montreal and Red Storm Entertainment, and released to fairly positive reviews.

In all honesty, this is where these diaries are going to get a bit bulkier. Did you know that there were three games called Rainbow Six 3? This one, Raven Shield, was released first, so I’m playing it and its expansions first. The second one was released on several consoles and has a different story, so I’ll be going to that afterwards. The third was an Xbox exclusive, so I don’t currently have a way to play that.

But back to Raven Shield. I’m using the Raven Shield 2.0 mod, which updates the textures, changes the menus and implements iron sights, as well as a few other things. I’ve also installed the Iron Wrath expansion, which you have to grab from ModDB, following a Steam guide by a user called Verstanden. But that’s for later.

This is my ongoing exploration of Tom Clancy’s Rainbow Six series, played in release order, where I will chronicle my playthrough like a text-based Let’s Play. This time I start Tom Clancy's Rainbow Six 3: Raven Shield.

The CopyCat had been brought to justice, and we’d reminisce about Ding Chavez’s solo mission to Norway, but now it was back to modern-day shooting terrorists in the face…

Firstly, however, I went into training. This was going to be different enough if the manual was to be believed, and I wanted to be prepared. Things went well, until Hostage 1, where I was shot because I fired into the doorframe when I opened a door slowly, instead of at a terrorist. Then, in Hostage 2, one of my squadmates opened fire on a terrorist that had surrendered, and kept shooting him even as the exercise ended successfully… But I had the basics down. 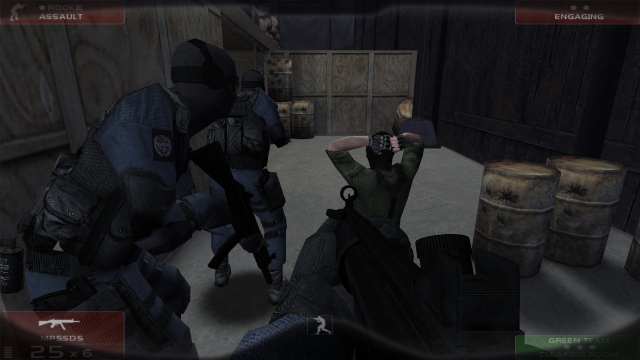 Things started off as they often do, with Nazis in the 40s. Cutting to 2005, and a modern day Nazi walked into a records office and shot someone - I only call him a Nazi as he used a Luger to do it. At this point it was just semantics.

So began Operation: Stolen Flame, it was November 2005 and we were off to Amuay, Venezuela. Terrorists had taken over an oil refinery, and were claiming to have rigged the place with explosives. The People’s Social Nationalist Party (PSNP) were demanding that a war criminal named Peja Sicic not be deported, and be released within 24 hours or they detonate their explosives.

That’s the intel that Control and John Clark gave me - I’m not entirely sure what Kevin Sweeney told me. I know that I complained previously about his accent being distinctly not-British despite hailing from Birmingham, but the new accent is just atrocious. It sounds like a Yorkshire accent and a Cockney accent got into a fight, and neither of them won… I went with the default people and mission waypoints, though was dismayed to find that I could no longer enlist Reserve1, as I had done in the previous two PC titles and three expansions. There was also no longer a Blue squad. Therefore, I was heading up Red squad as Ding Chavez, with Green squad clearing out a course which somewhat mirrored my own before converging on the final room. Have to admit, I prefered the maps in the previous games

We deployed, and I rounded a corner to find two terrorists. I shot them in the back and carefully made my way through the checkpoints. One of my squadmates shot a man on a gantry to our right, before we headed down some stairs. I shot another terrorist, and we went around some trains to find another one dead already. Up some more stairs, my squad shot another man on another gantry and we arrived at a door, from which I could see Green squad nearby.

Saying the go code, we went inside. Green squad came under heavy fire and one of them was hit. We carried on, Red squad clearing a couple of terrorists stood next to an exploding barrel - without hitting the barrel - and then up some stairs. At the top we cleared the couple of men in the room before heading out across a gantry and in through another door, where I shot yet another terrorist. I hit another go code point and waited for Green squad to say that they were ready. Which is where another member of that squad was shot.

Once they were in position and had set a charge on the door, we went in and cleared the room. Mission successful in 5:23, with 26 terrorists dead, and two RAINBOWs incapacitated. Unfortunately, unlike previous titles that meant that they were as good as dead… So I redeployed, not wanting two people to die in the very first mission. 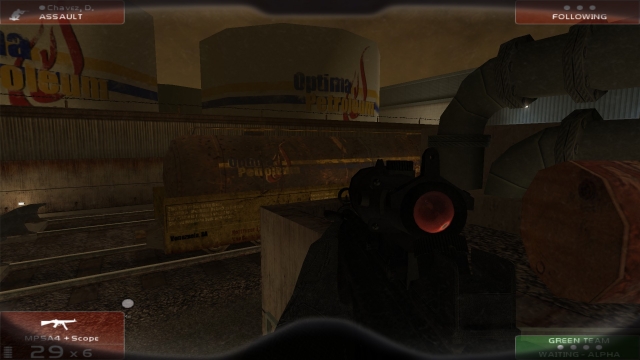 Just the place for a firefight...

Things progressed the same way, even down to a member of Green squad getting gunned down after the first go code. We went upstairs, shot the terrorists, then up the next set of stairs to clear out the room. Unfortunately, when we got to the single guy after the gantry, he somehow got the drop on me and shot me.

Things rapidly went downhill from there. When we went inside on the second go code I was shot again, alongside another member of Red squad. However it all went to pot, it was still successful in 2:59, with 26 terrorists killed. Two RAINBOWs were incapacitated, one dead and one wounded.

Redeploying once more, things went very well for a change. There also seemed to be fewer terrorists, as the three I usually killed at the start weren’t there, and only the one around the trains was there and not his buddy. After the first go code, we went inside and things were okay, though one of the terrorists in the first room almost managed to get away before we shot him. We went upstairs, cleared the room and crossed the gantry to kill the lone terrorist. Once Green squad were in position, I hit the go code and we cleared the room. Mission success in 4:27, with 25 terrorists killed - yes, one fewer than the last two attempts… 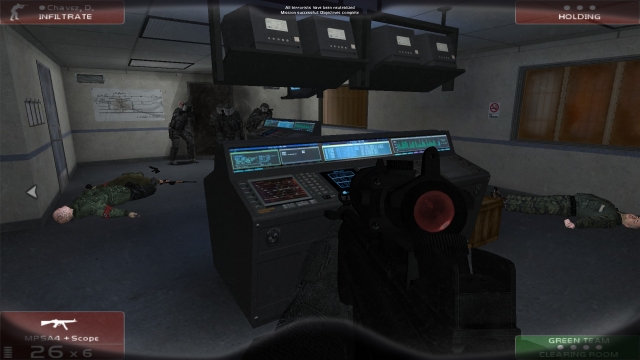 Things were looking good for Operation: Cold Dagger, which was good as we were headed to Jura Canton in Switzerland, and it wasn’t for Toblerone…