After a really tough operation, and a very easy one, I was eager to see what Operation: Blue Sky had in store for me…

A dam in Hungary had been seized by The Phoenix Group, but in a twist there were no hostages. Well, there was a terrorist-turned-informant, Roland Kunst, who wanted to get out alive, but the guy chose this life. I’d save him if I didn’t accidentally shoot him. 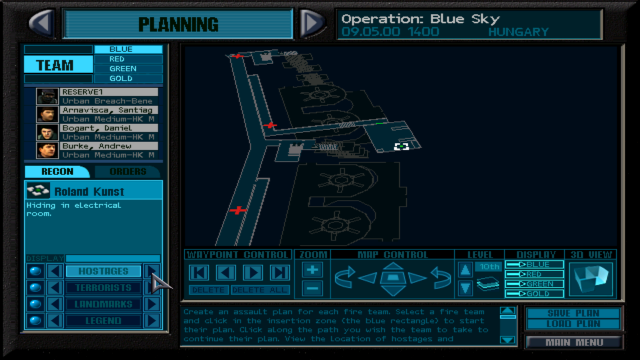 At least that was what I thought when I first saw the briefing. Once I saw that the dam was 16 levels tall, I figured it was in my interest to grab Roland and get out, rather than wipe out the terrorists, or deactivate the bombs. Again in control of Reserve1, I led Blue squad into the facility without a clear plan. Everyone was killed within three minutes.

Back in the planning stage, Reserve1 led Blue squad while Red squad was tasked with sweeping the dam and keeping attention away from us. Over the course of 11 minutes, I lost everyone except for two members of Red squad, having killed 22 terrorists. I aborted the mission upon losing Karl Haider a clear two minute sprint from the remaining two members of Red squad, who had gotten stuck at the top of the dam, whilst I was at the lowest level… 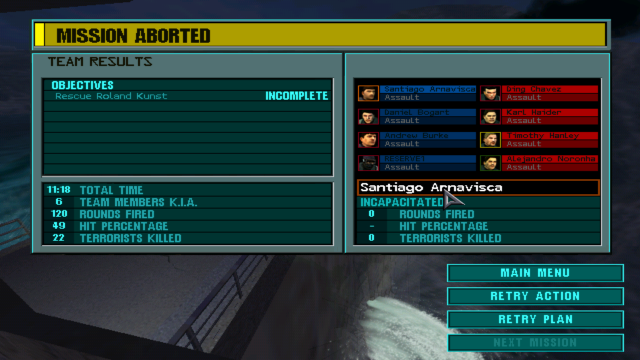 Deciding to go back to a single team, but with a planned route straight to Roland, I set up waypoints and went in. We went down some stairs and into the dam, following the staircase down to level 10. Two terrorists dead, Reserve1 was killed by the third who could apparently see us through the wall, despite patrolling the catwalk. Santiago Arnavisca killed him and took the team along the waypoints, but I took control of him in time to begin escorting Roland.

One of the team shot a terrorist on the floor below the catwalk, and we made our escape. We sprinted for the extraction point, back up the stairs - but unfortunately, there was a terrorist waiting outside. The moment we got out, Roland was shot, and Andrew Burke was injured before I could shoot the terrorist, failing the mission in 4:23, with five terrorists killed.

However, since the plan was obviously a good one, I went back into the action. Down the stairs, into the dam, down more stairs - the terrorist who was usually on the stairs was oddly missing. At the bottom of the stairs, I shot a man who then just… stood there? Very concerned with how this was going, I continued on, shooting a second terrorist down the hall. The one who had Reserve1 last time had his back to me as I reached the catwalk, so I shot him and hurried into the room Roland was in. I grabbed him, and as we made our escape, I noticed that there were three terrorists missing on the level below the catwalk. However, I continued on through the corridors, up the stairs and outside. We sprinted for the extraction point, and the mission was a success! Five minutes exactly, with three terrorists killed, and on to Operation: Fire Walk. 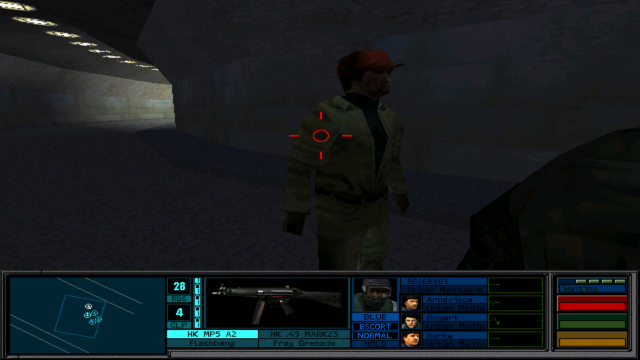 Roland’s intel had revealed that The Phoenix Group had a biowarfare lab in Idaho. I had two objectives, though it amounted to a single one - kill everyone. The second objective was “prevent leader escape”, which kinda went hand-in-hand with “kill all terrorists”...

Planning a small operation, with only one squad of assault, led by demolition’s Reserve1, Since the area was a level four biocontainment facility, we had to wear biohazard suits - one rip in the suit and we would probably die. The plan was to go past the humvee (an escape vehicle) to see if I could disable it, before sweeping the facility. It took 3:32, and eight terrorists died, but we suffered one fatality and three incapacitations.

My plans changed, and I added Red squad to the line up, making them take an anti-clockwise route through the main facility once they had swept the outbuildings. My own route with Blue squad ran into the loading area, and clockwise through the facility. This action was much faster, weighing in at 1:35, with all 12 terrorists killed. However, I lost Reserve1, and three members of Red squad. Repeating the action saw only one survivor, in Red squad, and went to 2:11. 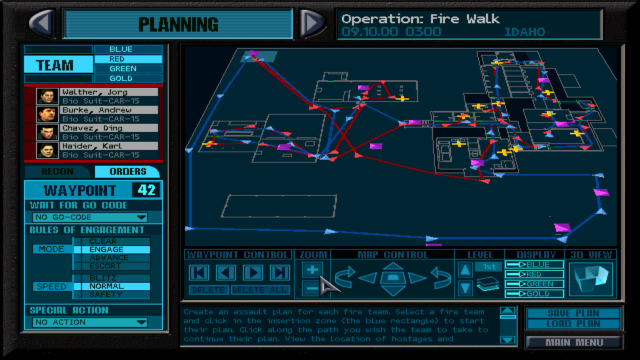 Analysing the plan, I saw that the kill-zone for Red squad was always the first outbuilding, so I moved a specialist from both Blue and Red to create Green squad, and had them sweep that building before Red could reach it. The action ran smoothly, though one member of Red squad was killed. However, after 5:43 I had grown suspicious that there were no more enemies, and had counted 12 bodies. Aborting the mission, I discovered that the mission report said that only 11 terrorists had been killed.

Running through it again, with two wounded and one incapacitated all in Blue squad, it ran for 4:07 with only 11 terrorists dead despite everyone having been killed. The next action was successful, but with heavy losses from both Red and Blue squads at 3:24, and the next one saw Red squad wiped out and Reserve1 dying too at 2:09. 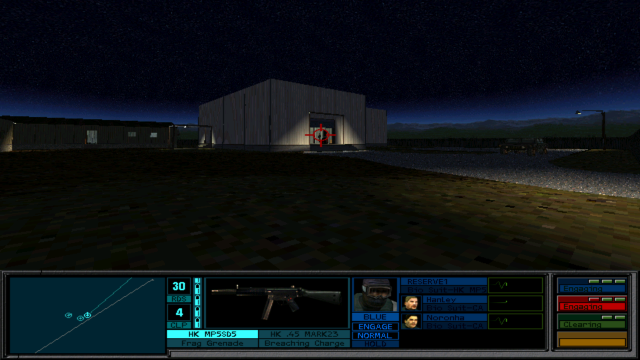 By this point I was losing patience, and was very annoyed to find that the mission failed at 1:17, despite eight terrorists dead, and five surviving specialists. I can only assume the leader escaped. The next attempt was a success with four K.I.A. at 1:43, and the next one just went wrong in every way, from three K.I.A.s to three terrorists going missing.

I altered Green squad’s route to take them inside the facility, along the same route I was to take. Another two attempts resulted in 11 terrorists killed within a couple of minutes, and the 12th missing. However, retrying the action a third time resulted in a win, with no K.I.A.s and 12 terrorists dead, in 1:08. The only thing that I did differently was allowing Green squad to enter before me. 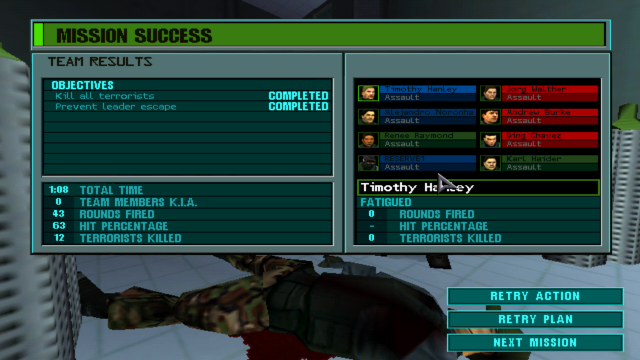 However, despite Operation: Fire Walk’s success, I had to deploy straight into Operation: Winter Hawk! The Phoenix Group leaders had fled to an airstrip before I had arrived on-site, so I was to use my current team to kill all of the terrorists before they could get on a plane…