After catching a bus, kidnapping a terrorist and bugging a communications unit, we were off to Holland…

Operation: Golden Song consisted of a high speed train and two hostages - thankfully the train had been stopped, because I didn’t fancy infiltrating a moving one. The Copycat had, obviously, struck again, but didn’t know that we were listening to their conversations, so we could get in and strike before they knew it. In theory.

RAINBOW suggested a four-pronged approach - two teams in the front, two in the rear. I decided to go for two teams, one in each end of the train, and each going for a hostage before extracting them. We deployed. Blue squad was in a field near the station, while Red squad were a floor beneath the train platform - they had a huge head start on Blue squad. I led Blue squad train car by train car, shooting a couple of terrorists along the way, but I wasn’t even three cars down before a hostage was shot. Mission failure in 54 seconds, six terrorists killed - mainly by Red squad.

Deciding that having multiple teams opened things up to multiple failure points, I removed Red squad entirely and redeployed. Once again, I shot a few terrorists, but the final one must have been too loud as a hostage was shot again. 1:02, four terrorists dead.

I’m not happy to say that the next attempt was exactly the same, lasting three seconds longer and ending with one more terrorist death, presumably because I got angry and shot some terrorists in the next car before the mission failed. Oh how I enjoyed looking at these trains...

It was here that I decided to try and see exactly what was causing the issue. I played through - and failed - several more times, using a variety of different cheat codes. It turned out that the terrorist who shot the hostage was aiming at her the entire time, and the instant he was alerted, he shot her. There was no way that I could get up the stairs to the hostage without alerting him.

So, I cheated. By turning invisible, I was able to avoid detection - and thus alerting anyone and causing a firefight. I ignored one terrorist - as did my men who hadn’t followed me - and went into the first double-decker train car. I shot the terrorist who kept shooting the hostage, then deactivated the invisible mode and shot the other. For good measure, I shot the one downstairs too, before aiming through the windows and killing the two terrorists with the hostage in the next car.

I headed into the next car while my team were running through the waypoints and killing people, then upstairs to grab the hostage. I returned to the previous hostage to pick her up too, then hurried back to the extraction point. Mission success in 3:20, with nine terrorists killed. 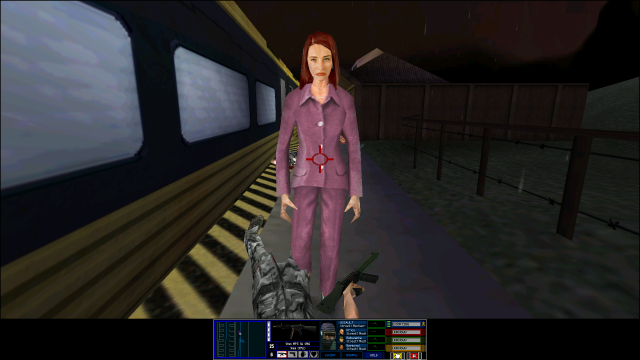 She's SO HAPPY to be rescued!

We were on our way to Kenya next, to rescue some students from an airport for Operation: Blunt Scroll. The Copycat had been identified as David Newcastle, a former-SAS who had tried to get into RAINBOW but been unsuccessful due to mental issues. RAINBOW suggested a two-pronged assault, but after the hassle of the previous mission, I decided to try it with a single team first, doing a circuit of the two floors of the terminal. Deploying, one of my team immediately shot a terrorist through the glass doors we were stood next to. I hurried out and shot a second one, then went along my route. We shot a terrorist from the balcony, then made our way towards the front of the terminal where we shot the terrorists holding the first batch of hostages. Heading downstairs, we made sure the area was clear before heading for the next hostages.

After shooting another couple of terrorists, I carefully approached where the hostages were being held, and as soon as I spotted the terrorist - turned sideways to the glass door - he shot the hostage. Mission failed in 3:02, 10 terrorists killed.

We redeployed and one of my men shot the same terrorist a couple of seconds later. They also shot the other man as I left the room, and once inside the main terminal area I shot another one. Unfortunately, the one below us was alerted, so I had to alter my plan. I hurried forwards and we shot the terrorists near to the hostages, but the one who had escaped us was hiding behind a pillar. 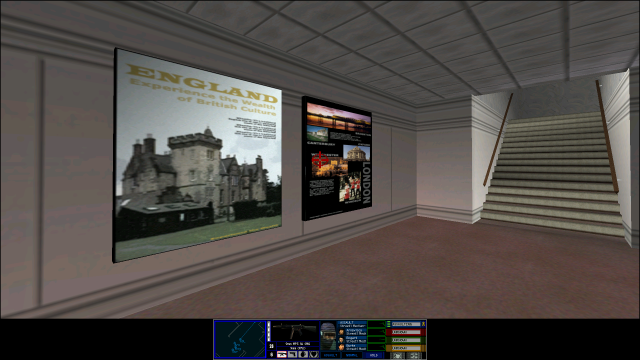 Reminder - this is in Kenya

Hurrying into another position, I shot him before he got the idea to shoot the hostages. I then had the idea of approaching the second hostage room from the opposite end of the hallway, so went downstairs and creeped forwards. I shot the terrorist and burst into the room, managing to shoot the other terrorist before he could take aim at the hostages. I grabbed them, returned to the others and we all went for the extraction point (minus a bit of getting lost and shooting another terrorist). Mission success in 4:46 with 11 terrorists killed.

And so we had reached the penultimate mission - Operation: Broken Sceptre, where we would be heading to Milan - and it wasn’t fashion week… Because it was November, and that had happened in September…