Having stopped a train bomb and rescued scientists in a hotel, things were ramping up…

Operation: Back Alleys kicked off on the 12th of July with a briefing about Colonel Shamil Magomedov, the former commander of a Chechen rebel militia. He was linked to the terrorists from Cannes, and had been spotted in Pavia, Italy. As such, the local constabulary were on alert, and managed to thwart the kidnapping of a telemetry scientist, who worked on the EU’s satellite launch program. When the doctor escaped, the potential kidnappers fled into the back streets. I was to get in there and kill everyone, especially Colonel Magomedov.

We went through a courtyard, killing two terrorists, before spotting another on a rooftop, and another on the street below. Following the alleyway I surprised another terrorist by shooting his friend, and he ran off down the street. Carefully approaching the corner, I shot three terrorists before moving on. Things were going swimmingly. 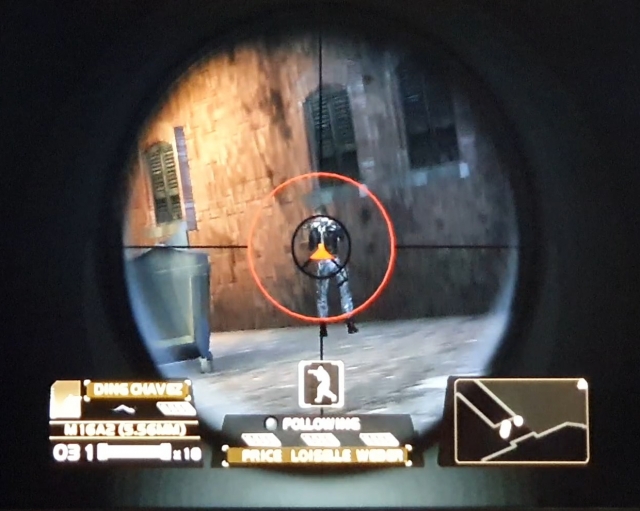 Until I almost reached the end of the street and was shot at from above. Well, Eddie Price was, I remained unharmed for a change. There was shouting in a language I didn’t understand, and a grenade landed ahead of us as we followed the winding streets. It went off, releasing it’s payload of tear gas and making me swear as I walked through it, having to rely on my men to shoot the terrorists who were shooting me.

We entered a building, going through to an outdoor storage area. There were terrorists inside, I knew that from the fact the door was ajar, and one of them spoke again. Opening the door, one of them screamed out, and two charged towards me as a flashbang went off, blinding and deafening me. I managed to hide behind the door, though I took some hits, until my vision cleared. As we went inside, a terrorist shot me from above, before we killed him and the final guy in the area. After a quick sweep, we went upstairs, and I was shot in the back and killed.

Having saved before the storage area, I reloaded. Things went a bit worse this time, as I opened the door to let my men deal with the terrorists, which resulted in Eddie Price being incapacitated. 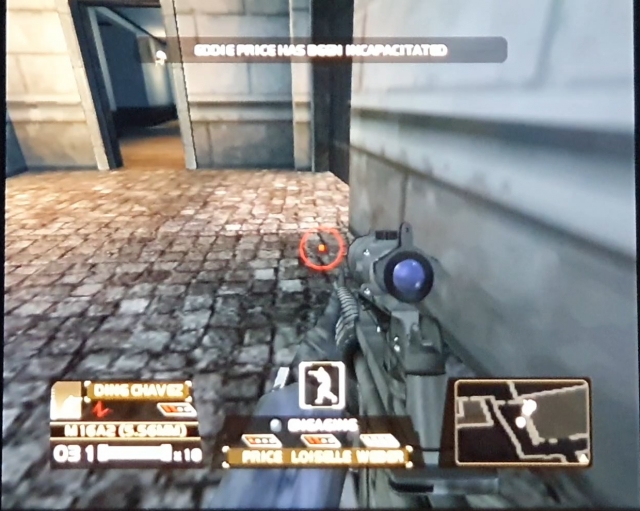 Reloading again, I told my men to hang back, and opened the door before falling back myself. After a few moments, I peeked out and shot two of them, before leading the team carefully inside, though I took some hits from the guy upstairs again. Heading up the slope, I made sure to kill the one who shot me last time, then let my team kill the terrorists who entered the area below us.

Next was a section that resulted in many retries. I all but lost my mind with it, because clearly I was too low on health, but unwilling to go back to the previous save point.

Ahead of us was a house with a window I figured a terrorist was inside - there was not - as well as an open area ending in a street partially blocked by a van and a car. Between the open area and the vehicles was a door to the left and a turn to the right - towards my target the Colonel. What I would learn in the clearing was that two terrorists would come running out - one to throw molotov cocktails, the other to shoot. Below us, someone would be firing rockets at us. On the other side of the van, and out of sight, another man would also be throwing molotov cocktails - with uncanny accuracy. 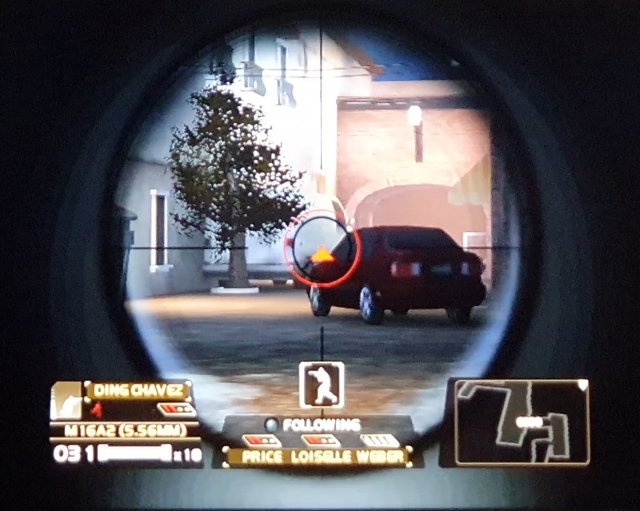 How? I DON'T KNOW

Including the briefing and loading times, as well as the reloads so far, the video that I recorded of this section was at 16:30. I wouldn’t get out of this section and save until 35:00. To say that it stressed me out would be a massive understatement.

So anyway, I went into the street and ran for the door. Entering the door, I quickly shot the man inside as he flipped over a table. My men behind me shot another man who ran in, and I peeked out through the doorway at the far end to shoot two more. That was the winning strategy, after losing various members of my squad in a variety of ways, mostly, I will add, as a result of that second molotov thrower. Just ignore the three to the right, run for the house and shoot away.

We exited the house and hid behind an overturned bin, shooting at the terrorists gathered around the house ahead. There were two to the right who had given me issues previously, so I used my grenade launcher to get them first. We followed the slope down, and around to another open area. The house ahead was where the Colonel was, so I knew it would have more guards. Two were on a rooftop to the right, one on a balcony to the left, but I shot them without issue. As two of my men were low on health, I told the squad to wait around the corner. Opening the door, I waited for people inside to move, and spotted someone behind an overturned table. There was another to the right, and then Colonel Magomedov behind more tables. He went to throw a grenade, but I shot him. 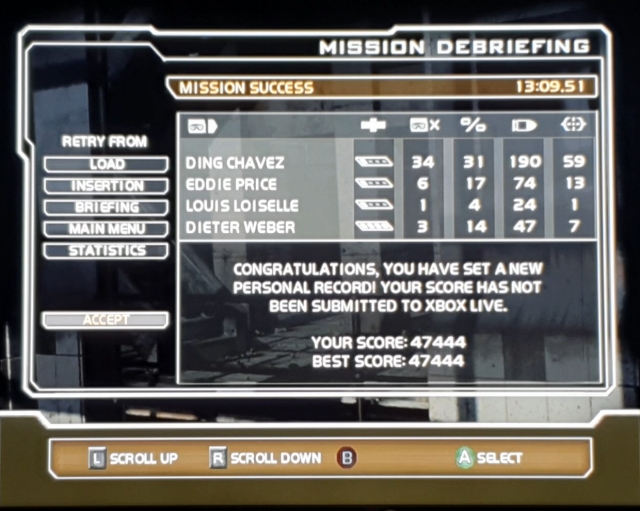 Mission success in 13:09:51, with 44 terrorists dead and a score of 47444. Finishing that mission was such a relief, but I couldn’t rest there, I went straight into the next one.

Early the next morning, Operation: Streets of Milan had us heading in to rescue some hostages and kill a bunch of terrorists. They were affiliated with the Colonel I had just murdered, and that was about all I was told, other than to watch out for roadblocks and snipers. After switching to the M16A2, I deployed.

Before I had reached the turn in the street, Eddie was shot by a sniper. I had been keeping an eye out, but not up. I shot the sniper and continued on, shooting a couple more men and another sniper from safety behind a car. There was a third sniper up to the right, who we shot before going beneath an awning to the left. Which was where a terrorist unloaded a clip into me from a balcony. I reloaded the mission, deciding that I couldn’t do this with half health after the first street.

Things, of course, went better as I knew where the terrorists were standing, ending up with the two on the balcony being shot fairly painlessly. The street ahead curved to the left, and I shot someone who was standing just past an alleyway. A terrorist fired at us from a window ahead, so we killed him and his mate on the ground below.

After passing through an arch, I was shot before shooting another terrorist. We took a brief respite in a shallow alleyway to the left, before I poked my head out to look at the blockade ahead. A bunch of men ran from the left and right, one-by-one, and as I was behind a bottle recycling bank I simply shot them with very little issue. Suddenly, the blockade exploded - but I was still very far away from it, and just enjoyed the fire for a moment. 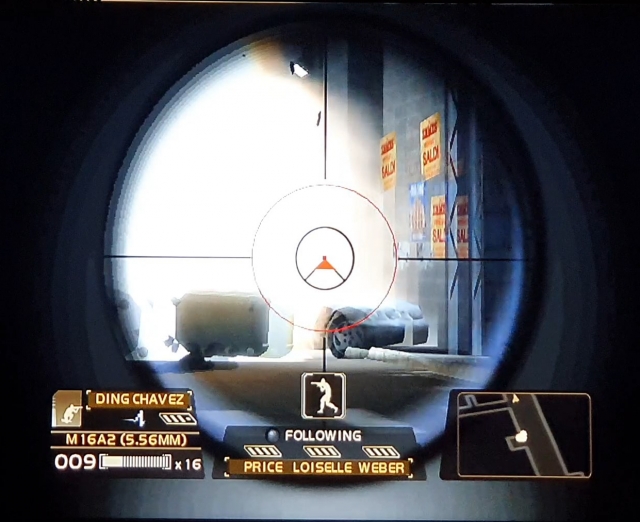 Moving on, we had to take an alleyway to the left, though we were fired at from a window behind us. The alley led us around inside a building, and I had to pick the lock. Opening the door ahead of us, we found a terrorist who immediately surrendered. After cuffing him, I opened the door that he was stood beside, which led into a warehouse. The terrorists inside threw a flashbang, blinding and deafening me, and I think my men killed them all. I may have had a hand in it, but I couldn’t see.

Leading the way into the warehouse, two more terrorists ran in, and we shot them. Unfortunately, one had just pulled out a flashbang, so I was blinded and deafened again like a fool. Outside, we went through a pair of large doors, and into a bar where the first hostage was being held. I had the men flash and clear the room - and stepped back to avoid being flashed again.

Once the room was secure, I had the squad handcuff him and led the way out towards another alleyway. Two men stood at the far end, so I shot them, then we approached a door into a storage room. There were two terrorists inside, who died pretty easily, one of whom I shot in the back as he ran. As the map showed two doors to the next room, I had the squad throw a flashbang from the right one, and went in through the left. A terrorist was holding the hostage, so I carefully shot him. The squad shot a couple more men who were outside, before I told them to handcuff the hostage.

Not entirely certain what happened out there...

Heading out and to the left, we went through another couple of big doors and followed an alleyway around. The area ahead was an open area, and had a blockage across the far end. There were a small handful of terrorists. After clearing them out, we went down a ladder into the sewers. I waited for the squad to follow me down, then checked the tunnel to the left. I shot one man, then was shot in the back by someone behind me.

Deciding to leave it to the squad, I sent them in to the left, and defended them to the right. There were two men there, but as I pulled the trigger I realised that they were guarding a bomb. I managed to kill them whilst avoiding the bomb, and the squad cleared however many were up the far end. Mission success in 14:54:82, with 49 dead terrorists and a score of 47181. 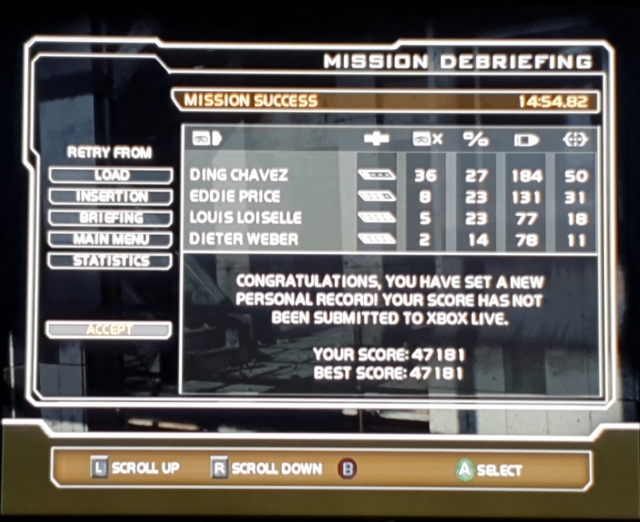 After that session, I decided that the rest could wait… 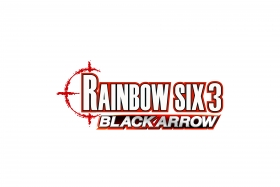