Having rescued an ambassador and saved a cruise ship, we were on our way to Djibouti, where a bus driver had kidnapped everyone on board his school bus…

This was the third in a spate of random terrorism which was spanning the globe. Sweeney (one of RAINBOW's advisors) was convinced that they were copycat attacks, since no terrorist group was claiming responsibility, and they were doing the same things that terrorists had done in the past.

What made that a bit more obvious was that this was taking place in the same country that a similar attack had occurred, where the French had rescued the hostages. Since I was warned that they had radios, and I would fail if I didn’t reach a belltower and shoot the bus driver before he escaped the area, I decided to go in solo. I took Reserve1 from the Sniper division, equipped him with a PSG-1 sniper rifle and silenced pistol, and plotted a route which would hopefully avoid the terrorists on the way to the belltower. I had no way around the one closest to my infiltration point, so hoped that the body was out of the way enough to avoid detection. Part of my master plan

Deploying, I snuck up to the building and could clearly see the terrorist through the window. I didn’t think that I had the shot, so stood up - which alerted the man and made him shoot me. Failure in 1:15, all RAINBOWs incapacitated, no terrorists dead.

I redeployed and went back to the house, and shot him from my crouched position before carrying on to the next building - a shop. I had also equipped a heartbeat sensor, so watched for enemies. Sneaking up to the window, I was shot. Failure in 2:29, same result.

There were two more failures, but due to the screenshots of the mission summary screens not saving, I can’t tell you much, other than I had to redo my plan to account for the sniper at the end of one of the streets, and if you don’t kill people in one shot the bus starts to leave and you fail. 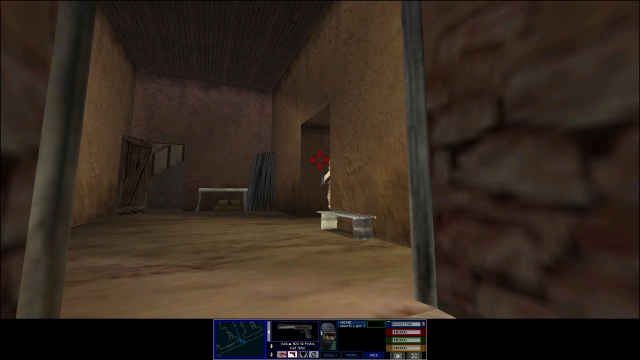 So - I redeployed once more with a weary sigh. I went up to the first guy and shot him as he turned to face me, then caught the second before he had begun his rounds. I ducked behind the barrier to avoid the sniper, and went into the building opposite and upstairs without meeting the terrorist who was sometimes inside. At the top, I spotted another man also on the roof, but too far to be a bother. There was a closer one that I could see, so I watched him on the heartbeat monitor and waited for him to go around a corner, before hurrying down some stairs.

There was nobody on the way towards the church, though I remained hiding as I went. A man guarded the door, so I shot him and went inside the church. On my way upstairs, I heard someone say that they had heard me, and shot him when he came down the hall towards me. I went up into the belltower and looked out at the bus, grabbed my sniper rifle, and took the shot. 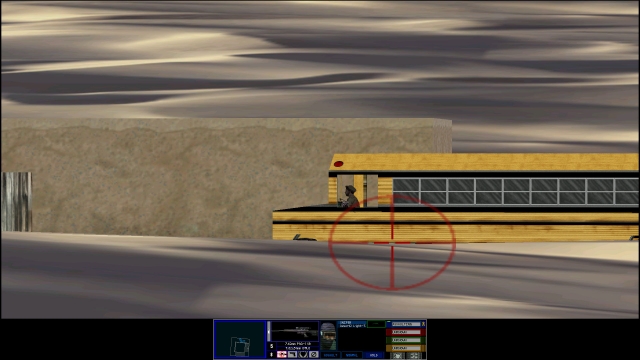 Mission success in four minutes exactly, with five terrorists killed. With 100% accuracy, it was my most accurate mission ever. With that, I was finally off to Nigeria for Operation: Coarse Blade, where UN peacekeepers were being held hostage in a jungle-based camp. The terrorists were going to be heavily armed, and again this was copying another terrorist attack from Sierra Leone in 2000.

As I had to secure an anti-aircraft gun, rescue hostages and capture the terrorists’ leader, I was going to have to plan carefully. Except when I saw the map - a very simple affair. Nevertheless, I formed two squads, but due to a sniper position, I decided to keep them together. Blue squad was to disarm the AA gun and grab the hostages, with Red squad backing us up. We deployed and went for the AA gun. A terrorist heard us and came to investigate, getting shot by one of my men. They shot another terrorist, and I shot one as I rounded the corner. I disabled the AA gun and then we moved on across the bridge to follow after Red squad. We stormed the building where the terrorist’s leader was and killed everyone inside. Coupled with those which Red squad had killed, it was a successful mission. It had taken 1:29, and we had killed 14 terrorists.

Operation: Spirit Clasp was next, taking us to Thailand. A hospital had been taken over, and hostage lives were being threatened. The leader of the terrorist organisation was being called The Copycat, and so RAINBOW was hoping that we could bug the mobile communications unit that each group were given. We only had four missions left, so had to get a move on catching this guy.

My plan took us down to the communications unit, past the first hostage, then up a floor to grab the second - and hopefully wipe out all of the terrorists in the process. We deployed on the roof and entered the stairwell, heading down. I heard some footsteps through a door, but they didn’t hear us as we kept going down to the ground floor. It was a bit round the houses, to be fair

Going straight for the communication unit, I shot two men. I planted the bug - and an alarm went off. Someone came running towards us, so I shot him, then another terrorist in an office. I shot another couple of terrorists, before one of the hostages was shot. Okay, I thought she was a terrorist and shot her… Mission failure in 1:12, four terrorists dead and one hostage dead.

We redeployed, and I swore not to shoot another hostage. To be fair, the number of hostages that I had shot to this point was very low. So, back down the stairs, but I didn’t plant the bug yet. I went through the ground floor shooting terrorists, then went and planted the bug. Moments later, a hostage was shot. Mission failure in 2:02, 10 terrorists dead. "I don't think they can give you anything for that..."

Another redeployment, and I planted the bug - only for a hostage to be shot. Mission failure in one minute, seven terrorists dead. My plan was out the window, so I decided to clear both floors before planting the bug - that seemed to be where I was failing.

We went from the roof to the ground floor and cleared it out, checking in every door that I passed. Then, I went up a floor and went straight for the hostage, shooting terrorists as I went. Once I was pretty sure that the coast was clear, I planted the bug - but the mission didn’t end. I did another sweep of the ground floor, then back upstairs. I didn’t see the terrorist, but one of my squad did. Mission success in 6:57, 17 terrorists killed.

Next I was off to Holland - I had a train to catch for Operation: Golden Song…