Having once more saved the Camens and then a meat packing plant in Argentina, we were headed to Porto Alegre, Brazil, for Operation: Stone Cannon.

Authorities had identified - thanks to confessions from the terrorists we grabbed in the Camens - that an import-export firm was housing chemical weapons. John Clark also took a moment to tell me that we were now being stationed out of Langley temporarily. A Canadian one? An American one? One of the 12 in the UK, which would make very little difference from our usual base in Hereford? No idea.

We were raiding the place to take out everyone inside, because they were making VX nerve gas, a compound so deadly that you just had to touch it - and it adheres to any surface. Meanwhile command were going to work on analysing backups of 40 years worth of data from Argentina, which the terrorists had been there to destroy. Checking out the plan, I saw that Red squad was to clear the lower areas, while Green and Gold went upstairs. It was a nice change of pace that I would have less to do. We deployed.

As we left the deployment zone, my squadmate shot a terrorist who was up on a balcony. I shot one next to a car, before entering the building where I was shot. I took over as the second member of my squad, who was quickly also killed. With Red squad down, I switched to Green squad as they headed upstairs. I tossed up a smoke grenade and got my gun out, then led the squad in where we killed a few terrorists before checking the nearby rooms.

Stood next to a window, I noticed there were several terrorists so I shot at them from the safety of my higher ground position, and the bountiful wall which held the window. Leaving, I spotted a terrorist just getting on a ladder and going down, so I looked down the ladder and shot him in the top of the head.

As we arrived at the bottom of the next set of stairs, we reached the go code - moments before Gold squad confirmed that they were in position. We went in and cleared the room - but since I had just shot most of them from the window, it was easy going. We headed out and… Well, since Red squad hadn’t completed their checkpoints, that meant there were still terrorists somewhere. I could head Gold squad fighting, where they lost one of their team, but decided to go exploring to find the final terrorists. 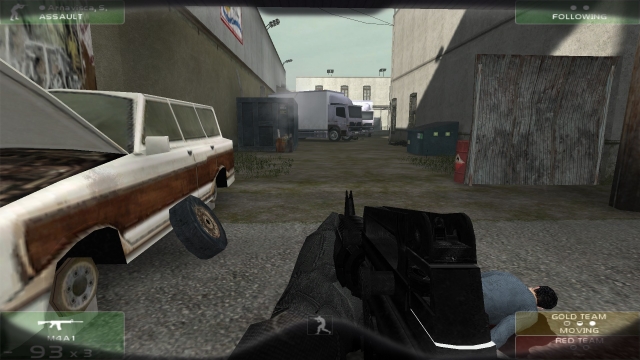 Ironically that car was in better shape than my team...

We found one a minute or so later, upstairs in a room which had several corpses already in it. Some more exploring led us to two unopened doors, so I told my squad to open one while I opened the other. Mine led into a corridor, theirs led to the final terrorist, who they shot. Mission success in 5:56, with 34 terrorists dead, two RAINBOW incapacitated and two KIA.

With an unacceptable four dead (because incapacitated basically means dead in this game), I hit the retry button to head back into the action. Things went differently, as I was in charge of Red squad for more than a minute. I shot the guy on the balcony, my squadmate shot the guy at the car, and I tear gassed the room where I got shot twice. They came running out, so we gunned them down in the doorway.

Heading in and through was pretty easy, and we were soon at the go code. It said that I was to tear gas the place, so I prepared to do that - when a terrorist came around the corner. My squadmate shot him as I was still getting my gun out, and I went around the corner deciding the element of surprise had been lost. We gunned them all down, and as I shot the last one through the bars of some racking, gold squad reached the go code too. 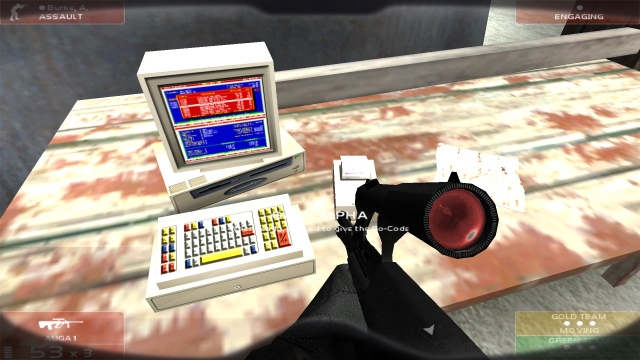 Triggering it, I went out through the main doors and kept my eyes out for anymore hostiles. However, just before Green squad reached their go point, they shot the final terrorist. Mission success in 2:59 with 34 terrorists dead. Two months would then go by, as on the 9th of August 2006 we were heading back to Argentina, more specifically Buenos Aires, for Operation: Shattered Glass. We were being ordered to bug a computer and two phones in the penthouse of an extremist Argentine politician, Alvaro Gutierrez, who had been linked to the incidents in Switzerland and the Caymans.

The plan was for a single operative to go in and do everything - which was a great idea. Previous games had taught me that more than one was far too risky for a sneaking mission. I was happy to finally have an excuse to use the heartbeat sensor, though apparently most of the guards would be preoccupied with the local authorities turning over the offices on the lower floors. Down one staircase, up the other

Deploying on the roof, I headed down through the fire escape. I pulled out my heartbeat sensor, which turned out to be a pair of goggles, with red pulses where hearts were detected. The closer they were, the louder the noise it made. I crouched and snuck through a couple of hallways and up some stairs, straight into the office. After hacking the computer, I came out - and was spotted by the lone guard patrolling the area. Mission failure in 3:23.

Redeploying, I made it back to the office and hacked it, then left in plenty of time - because I’d gone in basically behind the guard. Up some stairs, I made my way to the bedroom where I bugged the phone. I took a few moments to collect myself and check for any heartbeats before leaving through a second door. I was greeted by a heartbeat coming around a corner, so kept back while he moved off to the right, and slipped past him to the left. 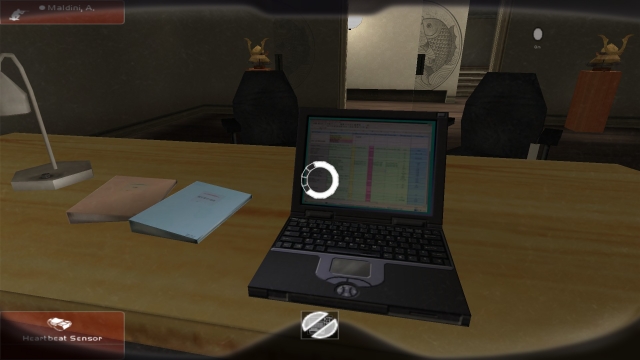 Once I was outside, I managed to avoid the guard patrolling the roof, and out through a gate. Around the building I got to a ladder, which led to my extraction point. Mission success in 5:32.

Six weeks passed in the blink of an eye, and before I knew it I was heading to London. A private bank - housing historical financial records - had been seized by terrorists. It was time to make a withdrawal…