As I mentioned in the final part of Urban Operations, I initially thought this was all tutorial missions or something. Thankfully, I read into it so that I didn’t just miss it out.

Released in September 2000, five months after Urban Operations, it was actually turned into an educational tool after the fact, teaching people about real life counter-terrorism. There are training missions, which I won’t be playing as part of this diary. The main campaign has three missions, which I’ll begin now…

It is the 17th January 2004, and it has been seven months since the events of Urban Operations, and we’re being activated to head to Bolivia. A Bolivian general, Hector Sixto, had been forced to crash land in the jungle, and he had been taken prisoner by the local insurgents. The Ejército Guerrillero Tupac Katari (EGTK) were small-time, but unfortunately for me, Sixto had been hauling some weapons and hard currency. That meant that the EGTK were equipped for bear - and I was the bear.

Plotting a course which saw two teams of snipers set up near the rickety wooden bridge, allowing Blue squad to grab the hostage, I was in awe of the amount of red crosses on the map indicating terrorists. Undeterred, I deployed with my usual full confidence in the plan. What could go wrong?

We all ran for the bridge, Red and Green squad ahead of me. We exchanged fire with the enemy, quickly wiping out seven of my eight RAINBOWs. Not an auspicious start… Now controlling the survivor from Green squad, I shot three men across the gorge, then proceeded across the bridge. I snuck up behind a terrorist and shot him, but before I could get a bead on the one past him, I was dead.

The mission was a complete failure, in 3:51, with 10 terrorists dead, three RAINBOWs incapacitated and five KIA. Not pretty… I knew that the plan was at fault, so went back and placed some Go Codes, so that I could take Blue squad to clear out some of the opposition before Red and Green reached the bridge.

We redeployed, and things went well, with terrorists falling to Blue squad’s bullets, before Green and Red swooped in to clear up the stragglers. I led the team to where I had failed the mission before, and shot both men before moving on. I reached a camp and was shot at, but killed two more terrorists. 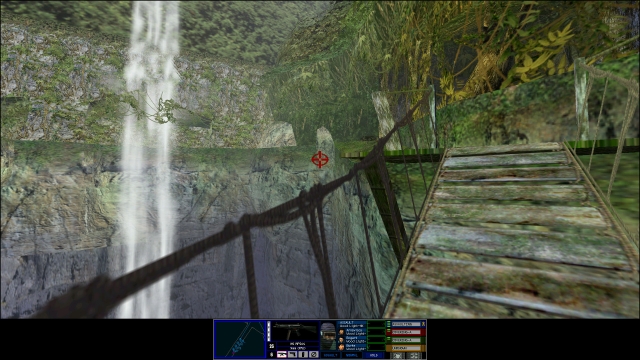 The route from there to the hostages was clear, with nobody to see around the crashed plane. For whatever reason, the extraction point was behind the fuselage which was very close by, so we got them there without any incident at all. Mission successful in 2:31, with 19 terrorists killed.

From the jungle to the frozen tundra, Operation: Arctic Zebra saw me heading to - the Arctic. A Russian spy satellite had crashed near an international Arctic Circle research station. However, after collecting up the debris contact was lost, and ariel scans showed evidence of a large armed force…

Intel suggested that it was Nozh, a mercenary group based out of Vladivostok. I needed to complete two objectives - rescue the hostages, and replace a part from the satellite so that we could track it. We were being deployed by sub, and had to get the hostages back to it before they froze to death. I had two teams - Blue would sweep left and grab the hostages, before circling back. Red squad were to break right and secure the building, waiting for a Go Code before they swapped the part. I wanted to ensure that nobody alive saw the swap. Good thing this sign warns about ice IN THE ARCTIC

Deploying, I ran ahead of Red squad, wanting to do my sweep before they got into position. As soon as I came around a corner, I was shot. Then the four Red RAINBOWs were also shot. I realised that they must have a sniper set up, so snuck back up and peeked around the corner before shooting him. I kept going, shooting another man at the bottom of the slope, and one to the right. I moved past a couple of hangers and was shot again.

Getting annoyed with people shooting me, I once more peeked around and shot the sniper before heading into the building - where I was shot. Now on my final team member, I killed the two men inside, then the one hiding in a side room. I replaced the part, grabbed the hostage (seems there was only one), and made my escape. As I headed along the escape route, I shot one terrorist - and the mission was an instant success.

It had completed in 3:23, with 10 dead terrorists, three wounded RAINBOWs and four KIA. Less than ideal. So, I decided to redeploy and snipe the sniper before he sniped. As planned, I ran up the hill and peeked out, shooting the sniper as the rest of the team came up behind me. Red squad shot the man at the bottom of the slope, and someone behind him surrendered. We split up and murdered our ways to the building, and by the time I was inside, the place was secure - and another terrorist had surrendered. Right in front of the doorway where the satellite was.

Rather than commit a war crime (going against my first instinct), I pushed the terrorist into another room and behind a wall. I grabbed the hostage and gave the Go Code before leading the way outside. Unfortunately, almost everyone got stuck on walls and door frames, so by the time the hostage was outside, Red squad had forged ahead. Moments later, they shot the final terrorist - mission success. It had taken 2:22, and we had killed eight mercenaries. Somehow, fewer than the previous attempt… 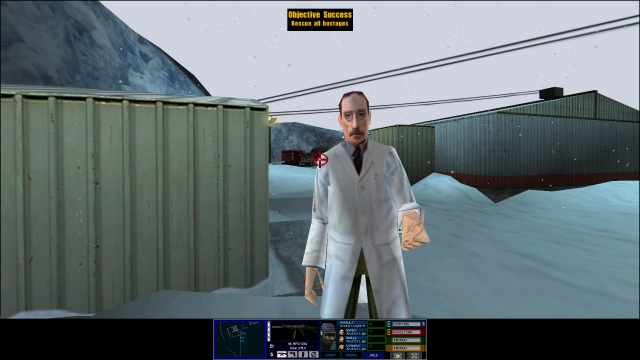 Dude, turn around and get back in the warm building

And so began Operation: Brazen Heart, a mission to neutralise all terrorists. We were headed to North Dakota, where an abandoned missile silo had been taken over by hostile forces led by a man calling himself Son of John Brown. Due to the location, we were to insert via HALO before dawn, then make our attack in the daytime. In John Clark’s words, we were to hit them like a hurricane.

This was our first mission on American soil since Operation: Pandora Trigger at the start of Rogue Spear. The government spin was that the terrorists could do nothing to crack the launch codes, but we were being sent in because there was a signal coming out of the bunker towards forces possibly hostile to the USA. I plotted out the usual two-pronged assault, and deployed. Look at my prongs!

Red squad broke left while I led Blue squad right, taking out the single guard who was above ground. We both went in, shooting first and never asking questions. As the control room was closest to me, my route took me straight to Son of John Brown himself. I winged him with a shot, and he surrendered after I shot his bodyguard.

As I continued, I passed Red squad as they headed for the missile silo. I unfortunately had to listen to two of them get shot, as I headed for my waypoints. I checked inside a conference room, and was shot dead. I controlled one of the others and shot the terrorist, before moving on to some offices, where I shot another terrorist, and the mission was a success. 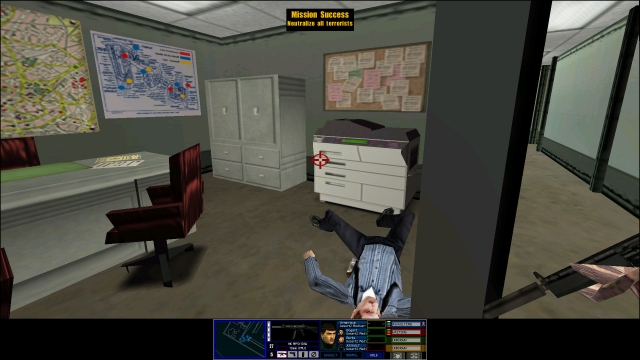 It had taken 2:58, and we had killed seven terrorists. One RAINBOW was injured, two were incapacitated and one was KIA. I figured that was acceptable losses, and we went home to be called upon when the world needed us once more… Some nice, big, maps in this expansion. It’s a pity that there were so few of them, as they were challenging and fun to go through. The inclusion of Son of John Brown was cool. Most likely named after the same man as John Brown’s Army from Tom Clancy’s Splinter Cell Double Agent, though that game came six years later, and I didn’t play it until September 2017.

As mentioned at the start, there are a number of other maps available. There’s no story attached to them - I played a couple just to make sure. For Training, you can access the Trailer Park, Junkyard, Store Front, Store Back, Emergency Room and Hospital. You get to practice your Fire and Movement skills. There are also six maps that you can run as Custom Missions. These are the three campaign maps, as well as Emergency Room, Junkyard and Trailer Park. You can run : Assault, Lone Wolf, Terrorist Hunt, Hostage Rescue, Defend and Recon. You can also do them on Recruit, Veteran or Elite difficulties.

So there is quite a bit to Covert Operations Essentials, with some good maps. It’s just unfortunate that it’s lacking in campaign missions.

Next up, I will make a start on Tom Clancy’s Rainbow Six Rogue Spear: Black Thorn.