After a stressful visit to Italy and Spain, I was hoping for a bit of time to recover…

Operation: Nuclear Reactor took us to Eastern Bulgaria on 22nd July 2008. Terrorists had seized control of a nuclear power plant which had begun the process of being decommissioned. They were after uranium - enough to make far too many explosive devices - so we were heading in to murder the lot of them. After swapping to the MA612, we deployed. 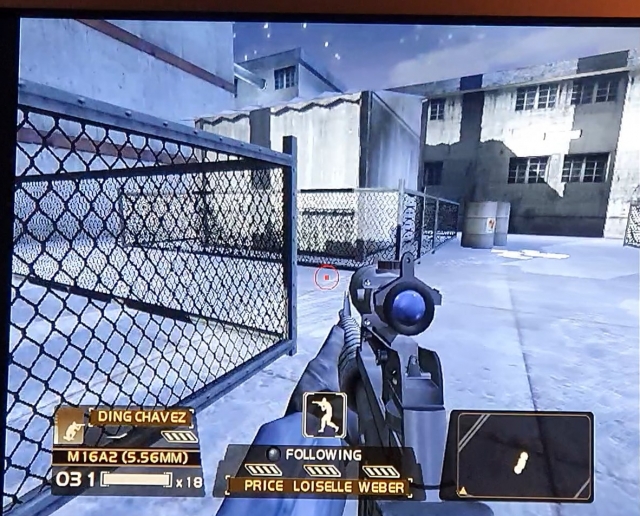 What followed would take 4,000 words to explain, because over the course of an hour I reloaded far too many times… I honestly had to give it a few days between play sessions to get over my frustrations. There were several places where the terrorists would appear in different locations, so I had to learn multiple setups. So, I won’t talk about making it to the final area with three dead teammates, or the dozens of times I was gunned down. Instead, I’ll go through my one successful run.

Deploying with nobody in sight, we headed to the left. A terrorist rolled out from behind some barrels, so I shot him, but missed his friend who was up on a gantry and running for cover. Edging around the silo, I shot him before leading the way into the facility. Following the corridor, I sent the squad forward to shoot a terrorist, then opened the second of two doors which led back outside.

Once more sending the squad ahead, they came under heavy fire from all directions, but miraculously managed to survive the experience with minimal - if any - damage. Leading the team up a ramp through a door, another man rolled out and was shot dead. Around the corner was a control room with a few terrorists, all of whom died easily. Which made a change from them tear gassing me… The next corridor led to a turbine room with two terrorists, who I shot and continued through to the reactor control room. There were two doors, and due to my past experiences, I chose the furthest door. Inside were a handful of terrorists who we shot, then I told my men to wait at the door at the far end. As soon as it opened, they shot the man who did it, and on we went.

Opening the door at the end of the hallway, I shot the man waiting down the next corridor who was about to fire a rocket at us. Opening the next door, I avoided being blinded by a flashbang before shooting a terrorist who ran past. Leaning to sneak a look, I shot the man at the top of the stairs before heading down them. A terrorist was waiting for us around the corner, so we shot him, and I sent my squad forward where they shot another one who had snuck through the door on the left. Usually I heard the door open first, but this time he had snuck out…

After following a hallway around, I decided to lead the squad in through the closest door into the generators room, rather than attempting the two-pronged attack which often failed. Inside were a load of terrorists and even more hiding spots, between boxes, machinery and pipes. It was tough, but we managed to get through with little damage, even from the two final guys who came out behind us.

The final corridor led to the containment facility, which had one terrorist above, three in front and one who was trying to surprise us from the left. After killing them and heading up the ramp, I hid behind a console and withstood the attack from half a dozen men storming from the exit and two windows above the gantry. We went outside and came under fire from a man in front, a rocket launcher guy to the right and a handful of assorted terrorists firing at us from the ground below and windows dotted around the place. After my experiences thus far, making it to the final door back inside was hysterically easy. We entered the facility and headed for the second door, which led to the main control room through a smaller room. Three men guarded it, and died easily, before two men entered the room behind two windows, one of which fired a rocket at us, before they both fell.

Mission successful in 13:36:54. We killed 59 terrorists and my score was 47934, and I was sincerely hoping for an easier mission next… At least one that wouldn’t take almost an hour and a half. Which, of course, led me to 8th August 2008 and Operation: Castle. Vladimir Zhilinski, a former top Russian scientist, had been grabbed by terrorists and taken into a nearby museum which was inside a palace in Milan - the Castello Grande. I looked it up, it doesn’t seem to exist. There was a second hostage that we were to help get out of there too, and that was it.

We deployed in the first place they would suspect - the front courtyard. Storming the only door, quietly, and took out a man next to a well. Moments later, two grenades went off, thankfully missing us, and a couple of terrorists ran up the stairs at the far end opposite us. We dealt with them, and headed down where they had come from. Two more came out of a door once we were downstairs, and died quickly. After a short corridor, I ducked my head out looking left, and ducked back again before the terrorist I had just spotted emptied his clip into the walls. Whilst he reloaded, I shot him, then checked to the right. Spotting at least one more, I remained behind a broken wall and shot half a dozen terrorists as they moved into positions with no way to get a good shot on me.

With the coast clear, I led the way through a tunnel and into the castello proper. There was a wooden staircase and gantry constructed above, but I decided to check the area first and found a terrorist on his own. He was looking right at me as I carefully aimed my shot through the wooden beams and killed him. Retreating back to the stairs, I began to go up but a grenade landed at my feet. I ran back and avoided the blast before heading up where we killed a couple more terrorists.

Due to some blockades, we went around the long way and were attacked by a man who came out through a gate ahead. He was shot, and we continued on through a couple of gates. Approaching another courtyard, I checked around the corner and spotted a sniper high above. I shot him, then someone threw a grenade at us which we avoided. 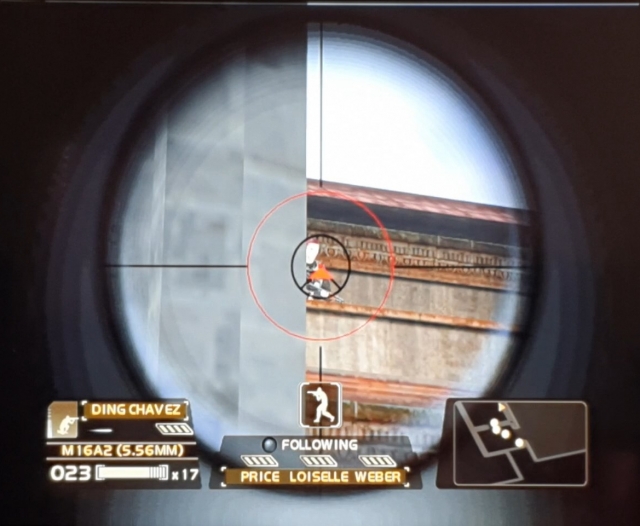 In the courtyard we were attacked from a couple of different angles, but got through and back inside. Now we were in the museum portion of it, as told by the displays and the tannoy saying that they were closing soon. We had arrived at 3pm, so that made sense. I told the squad to enter through the right door ahead, and I went for the left. Both were locked, so I had unlocked them both first, and whilst I was unlocking them two grenades went off, so I felt safe.

Unfortunately, one of the grenades was tear gas, and I was blinded as I blundered inside, almost shooting my teammate. With the room clear, I led them through a door and upstairs. Opening the first door I came across, I shot a terrorist. Before I could shoot his mate who was at the door on the far end of the room, he threw a grenade and I ran for it. Two large explosions went off, and I burst through another door in my corridor, to find a dust cloud, debris and a dead terrorist. I presume he missed with his throw and blew himself up. We headed downstairs again, exiting the building into another courtyard. Guessing that it was an ambush, I kept the team back as we dealt with what we could see, then I walked backwards to keep an eye on the upper windows behind us. Nobody shot from upstairs, and I’m pretty sure most terrorists attacked from one window and one door, so in all it was a naff ambush.

Back inside for a corridor, we exited into an actual ambush, with people shooting at us from defended positions on the wall above us. I was shot a few times, but they didn’t manage to do too much damage, before we exited to the left into another courtyard. This one only had a couple of terrorists, who ran from behind us and one in front. Which is weird, as the image of that courtyard was exactly what Clark showed us in the briefing whilst talking about ambushes. Downstairs, we found the dungeons - which was now a wine cellar. It was entirely empty, despite being a large room, and when I opened the door at the far end seeing two more, I decided to save. To now, I had used two other saves, so this made my third. However, this mission was allowing me four saves, which I thought was odd, given the rest were three. Especially since this mission wouldn’t turn out to be much longer than others.

After two failed attempts to split the squad, I reloaded and led the team through the right side door. We basically massacred the terrorists in the large room, which still had cells unlike the rest of the dungeon thus far. It was a bit tense in places, but once the way was clear, I told the squad to handcuff the hostage - who had avoided the bullets. There was an explosion upstairs, and a terrorist came through a previously-blocked door. I shot him, then led the way up and through the door. We had two routes open to us. To the right was a staircase. Ahead was a closed door and a corridor. The target was above us, and at the end of the corridor was a staircase. Deciding to use the closest staircase, I went up cautiously, and to the door at the end. Opening it, I was shot by a terrorist hiding behind some crates, before I shot him. Steeling myself, I opened the next door and shot one of the terrorists inside and missing the other. He hid beside the hostage, so I had to be careful lining up my shot - and being shot in turn - before taking him out.

With the hostage secured, the mission was a success in 20:38:39, with 52 terrorists dead. My score was 43636, and I was incredibly glad the mission was so easy. I hoped for more of those heading into this later half of the game… 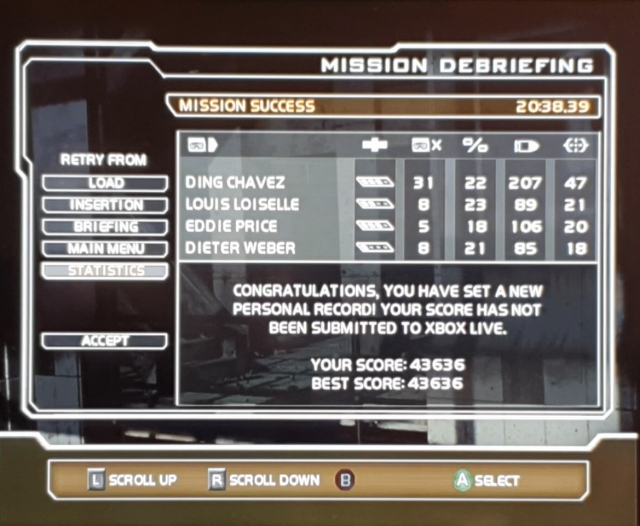