This is my ongoing exploration of Tom Clancy’s Rainbow Six series, played in release order, where I will chronicle my playthrough like a text-based Let’s Play. This time I continue Tom Clancy's Rainbow Six: Vegas.

Although we had foiled Irena Morales’ plans at the Calypso, she had revealed that she had a micropulse bomb…

Of course, it seemed to be a kind of microwave directional generator, rather than a bomb, but it still wasn’t good news. It was 0010hrs and we were hitting Fremont Street, Las Vegas. As we flew in, Joanna Torres explained that several casinos were under attack, and until all Delta Squadrons had arrived, we had the green light on all operations. Since Irena had broadcast her demands, and continued to do so, we were being sent in to stop it. 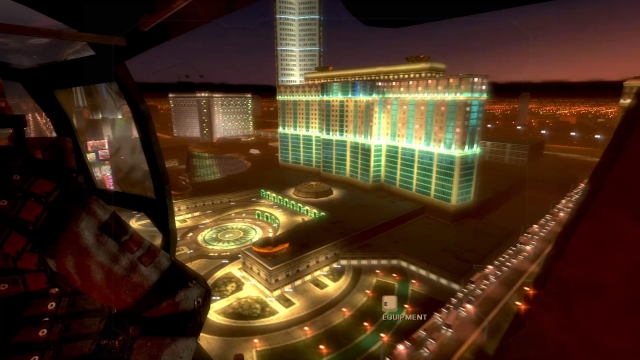 First thing, however, we had to rescue a reporter, Trish Gracie, who had foolishly agreed to a sit-down exclusive interview, and been taken hostage. She was in a Chinese restaurant, so we were to hit that, then move on to the transmitter. We deployed onto a rooftop, above two chatty tangos, who had somehow missed noise of the helicopter 15m above their heads. Checking the scene through the skylight, I spotted four tangos, so took up a good position and shot them all before fastroping down into the restaurant. Which, as it transpired, wasn’t just a restaurant, but a casino, and I’d misunderstood what I’d been told.

More tangos came in, so we cleared them up - and got briefly blinded by a flashbang - before moving on upstairs, and through some hallways. After checking through a door with the snake cam, I ordered the squad to flash and clear the two stood closest. However, from my angle I hadn’t realised how large the room was, nor the fact that it was spread across two levels. 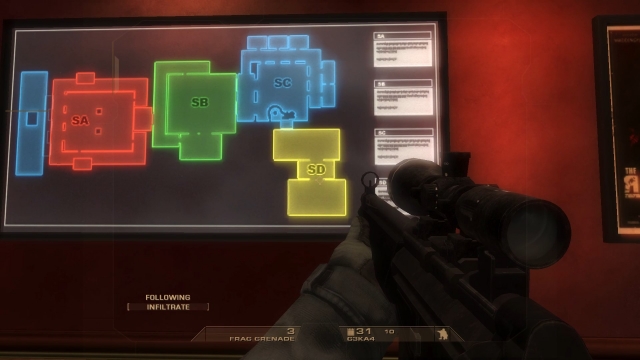 After an extended firefight, we went through the adjoining hallway to the next large room, also spread across two levels. The previous area had card games and roulette tables, this one had slot machines. Whilst hiding and checking the area, one of my squadmates were seen, and the enemy opened fire. It was another extended firefight, with us staying near the stairs leading up to us, before I moved downstairs to get a better angle on the few remaining tangos. Annoyingly, Mike got caught behind a waist-high wall, and couldn’t heal Jung, so I was a man short until I could get to him.

Using a fast rope, we loaded into the next area, where the reporter was being held. Rather than use the doors in front of us, I led the way to the right and upstairs. After checking through a door, we went in and shot the couple of tangos upstairs, somehow not disturbing the men downstairs with the reporter. As they were threatening to kill her because she had mouthed off at them, I shot the guy holding a pistol to her throat. That alerted the rest of them, and it was a shorter firefight than the previous two had been, but did use up most of my remaining ammunition. 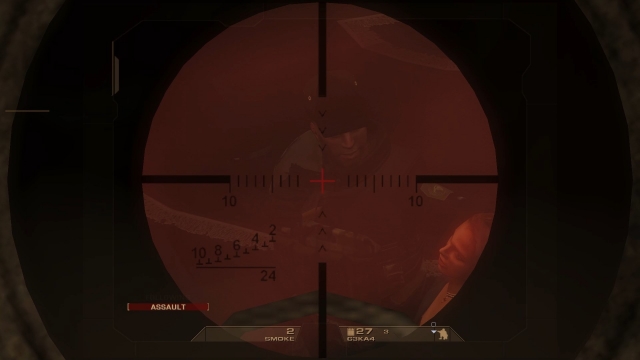 Once the area was clear, the reporter told us that she had been taken hostage because one of the terrorists had accidentally mentioned a news van. Logan told her to wait there, so she immediately ran out of the room. Logan reported back to Joanna, who told us to look into it, then warned that tango radio chatter had increased, and “something” was happening. As she was saying this, a wave of tangos arrived to shoot at us.

I pulled the men into a side room, and we waited for them to attack our handy chokepoint. Meanwhile, Joanna piped through news footage of the terrorists moving on the civilians, and shooting the cameraman. We headed out to clear the stragglers of the latest wave, and had to head to the aforementioned news van to hack its transmitter. That meant leaving the casino, and heading out into the street.

Lucky for us, the streets were crawling with tangos. I say lucky, as I’d brought my sniper rifle, and had nice, long sight lines straight down the road. I did almost shoot a civilian, but they ran in the way an instant too late, my bullet whizzing past harmlessly into a tango’s face. It was brilliant, as several tangos ran straight towards us, ignoring the handy cover to the left as each watched the one ahead of them get shot by a sniper’s bullet. 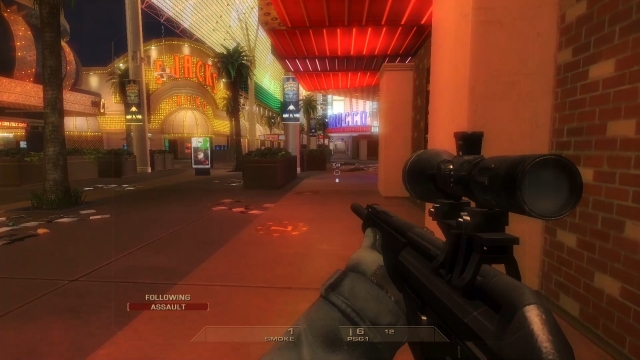 As we approached the Sirocco casino, the terrorists detonated an explosive, meaning that we had to go in through the back entrance that Jung had spotted on the map. As I was down to single digit rounds, I grabbed one of the terrorist’s weapons, swapping my G3KA4 for a 552 Commando. Approaching the alleyway, we were accosted by more men, before being given some intel by Joanna as we went downstairs. She explained that a civilian had spotted some terrorists in the maintenance tunnels beneath the Sirocco casino. Quite why we’d been trying to get in there before this, I was uncertain.

Going inside a door, we fast roped down, loading into the next area. Equipping silencers, I forgot to tell the squad to go back to infiltration, so the instant a tango came around a corner they shot at him. This didn’t impress his friends, and we had a firefight for control of the tunnel before we could move on.

Following the corridor, my snake cam showed a room full of tangos, pipes and equipment. After ordering my men to stack up at the right-side door, I waited at the left-side and gave the go order. They entered and started clearing, while I took shots from my position with the door open. Something flammable went off, but my men remained alive, so I took that as a win. With the room clear, we went off through the maintenance tunnels, shooting a couple more tangos before reaching Control Room B. 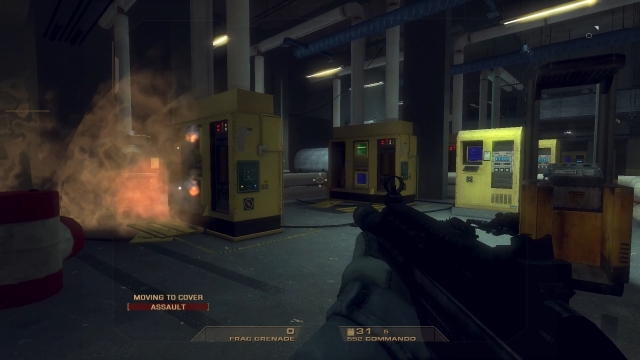 As it turned out, Control Room B was above a room full of machinery, and tangos. After checking out through the windows, I decided that it would be a safe bet to shoot from inside the room, and chose my targets. What followed was an extended firefight, with us fighting our way through a few waves of tangos on our way to the ground floor, at the rear. With some enemies remaining, we reached the door and climbed a ladder.

We went through a door, but before I could check the next door with my snake cam, it opened and we had to shoot two tangos. The building that we were now in didn’t appear to have a specific use at first, having computer parts and monitors in multiple rooms, as well as a bunch of terrorists. We did find our way to a kitchen area, and managed to quickly contain the enemy forces. But then we exited into a restaurant. 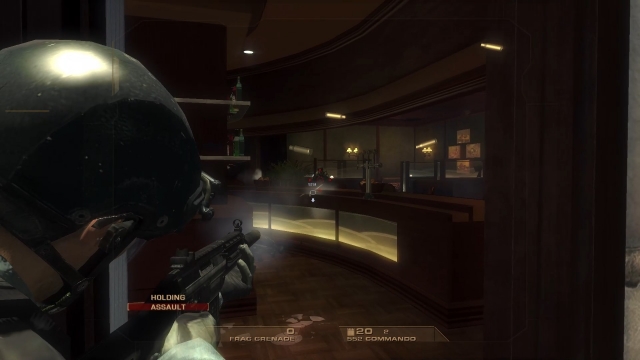 This resulted in yet another firefight, and while I took refuge behind a bar, I made my men clear the area while I provided suppressing fire. I didn’t want to get shot in the head, after all. Once the restaurant was clear, we exited out the front - and saw the sign: Il Angolo. 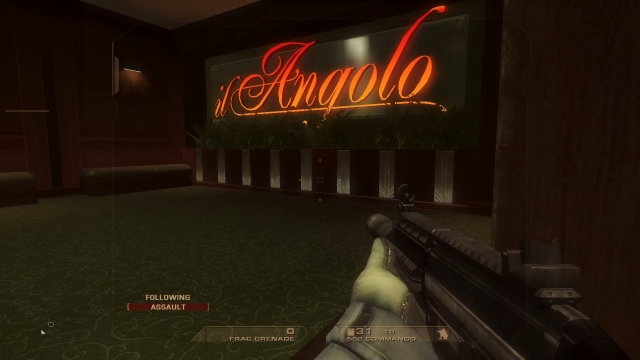 Going across the hall, we entered the manager’s office, where he sat having been shot dead. Thankfully, his office had a nice, big window which overlooked the motel opposite, and had a great view of multiple tangos. After shooting everyone that I could spot, we went downstairs and out into the street. I checked the area with my sniper scope, shooting the two remaining tangos, before I ordered Jung to hack the news van.

Jung connected Joanna to the van, and remained inside while she decrypted the information. However, thermals showed that we were expecting hostiles. They came from the far end of the street, the one which we hadn’t been down, and we held them off. I regretted not equipping a scope on my rifle, as the PSG-1 didn’t have a big enough magazine to be as effective as I needed. However, we finished them off just in time, and I told Jung to blow up the van. 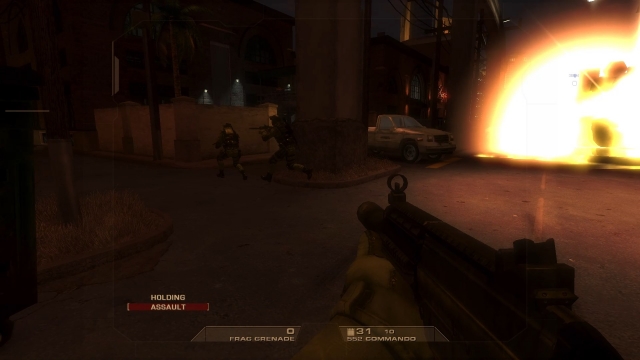 The charge went off, exploding the van. Joanna got in touch, telling me that the van was merely a relay. Then, she spent a solid minute typing on her laptop. Eventually, she said that they would come and pick us up, then spent another 20 seconds typing, before her image disappeared. Finally, the helicopter arrived, and we boarded. Joanna told us that the Vertigo Spire was under control by some professionals, possible ex-special operations, so we were headed there…

We fast roped to the roof, and the chopper pulled out.