This is my ongoing exploration of Tom Clancy’s Rainbow Six series, played in release order, where I will chronicle my playthrough like a text-based Let’s Play. This time I start Tom Clancy's Rainbow Six 3: Athena Sword Diaries.

After more than a year spent mostly in South America and the Cayman Islands, our mastermind Gospic dead, and Gutierrez in prison, it was time to get back to busting heads - RAINBOW style!

Operation: Azure Gate began on 12th June 2007 - which meant that RAINBOW had either remained in Rio for about a week, or for four months. That depended on how accurate the dates at the top of the briefing were going to be. Terrorists had taken hostages at Castello Grande, an art museum in Milan, and were asking for $30 million. As a result, it was cheaper to send us in to murder them all - and rescue the hostages. Not pictured: SO MUCH

The plan called for two teams - I was to lead Red squad inside the museum, and Green squad were to head through the courtyards. We deployed, and I led my team inside and upstairs. My squad began shooting terrorists through a window to the right, before I realised that my waypoint was back downstairs. After heading back down, I had to give the go code, and we proceeded back upstairs and left. We entered a room where a hostage was being held, and I shot the lone terrorist while a member of Green squad was killed.

The hostage thanked us, and we continued through into a hallway with three doors to the right. Opening the first door, we found a terrorist and another hostage. As I went to shoot the terrorist, the hostage leapt into the line of fire and died. Mission failure in 2:43.

Redeploying, I followed the waypoints and accidentally told my teammates to stay behind. A fact that I wouldn’t realise right away. Signalling the go code, I went upstairs and rescued the first hostage. As I signaled the next go code, I realised that my two teammates were not with me, so I told them to rejoin me and left the room. Up some more stairs, I opened the door and shot the terrorist before the hostage could try to run in my way again. 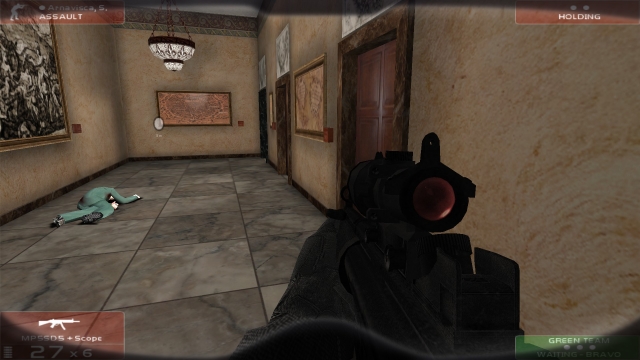 Good thing my objective wasn't to save THAT guy...

Leading the hostages, we entered a large room with several corpses and a grand piano. At the other end of the room was a smaller room, which I entered and shot another terrorist, adding another hostage to my roster. There was a staircase leading out of the large room, and back down to the ground floor, which we took. It led us outside, where I shot another terrorist who was in a sniping position to the right. After summoning my teammates, we went past Green squad and out through a couple of doorways to the rally point. The hostages were safe - mission success at 5:47, with eight terrorists dead.

Worth noting was how this had happened at night, yet the briefing at the start and end said that it was 11:15am. Operation: Hunter Storm started mere hours later, at 3:30am on 13th June 2007. The convoy taking away the terrorists whom we hadn’t killed at the Castello Grande had been ambushed. The captives were free, and the hijackers had taken hostages in downtown Milan.

There were going to be snipers, given the built up area, so John Clark suggested getting to the rooftops as soon as possible. He also told me that the best way to take out a man behind a barricade was from behind, so his advice wasn’t all fantastic. Coming in with some more great insights was Kevin Sweeney (thankfully not voiced in this expansion), saying how the terrorists we had captured “probably” weren’t art thieves. He suspected that they were tied to Gutierrez somehow, judging by something that was said during his interrogation some months/days prior.

Bafflingly, despite the previous mission briefing showing that they were alerted to the event at 1:07am, and we had at best gotten out at 11:15am, the newswire was now claiming that the Azure Gate had taken a mere two hours. I was fine with the local Polizia di Stato Italiana taking credit, but this was a step too far.

Green squad and my Red squad were deploying from the same spot, and Green squad were to take out the snipers. Leading the team into an alleyway, they shot someone down the far end and I gave the go code. We headed further down the alleyway and shot another one or two men even further down, but I threw a smoke grenade and led my team into a courtyard. Shots began ringing out, and I’m pretty sure I was hit, before yes indeed I was killed. 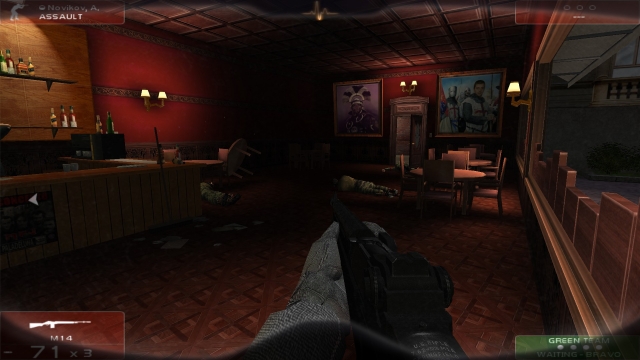 Would a café in Milan really have those paintings?

Unfortunately, even as I took control of two other members of the squad, they were also quickly downed. However, as Arkadi Novikov I managed to get into the café that I was being gunned down from, and rescued the hostage. Heading out through the back room’s back door, I spotted a terrorist and ducked back before he could shoot me. Sadly, from the angle I was standing at, I was quickly shot.

Taking control of Green squad, it turned out that they hadn’t moved from the end of the alleyway, leaving me wondering if they had heard the go code. However, the hostage that I had just rescued was killed. Mission failure in 3:42.

Redeploying, I went more confidently, this time actually shooting two of the terrorists. Into the courtyard, we easily killed the lone man in the café - before there had been two… We rescued the hostage and went into the back room, where one of my men shot the second terrorist. For whatever reason, he had remained there instead of coming to see what the gunfire and broken glass was. 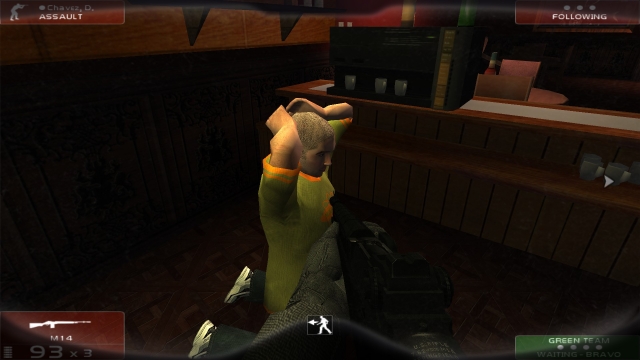 Keep quiet, people are trying to kill us all

Heading out into the street, I shot the man to the left while my squad dealt with the few men to the right. What followed was a series of streets without any enemies, and I almost thought that I was missing something. Luckily, I came across a trio in a crossway, and killed them. My waypoints led me into a supermarket, where we killed three terrorists and rescued two hostages. Carefully, I led the squad and civilians to the extraction point. And waited. 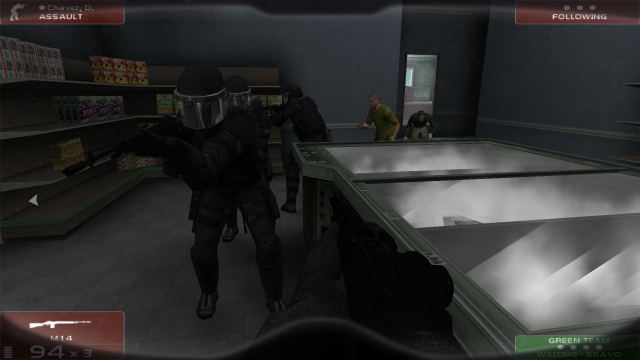 It was with stark horror that I realised Green squad were waiting for the go code. It turned out that their first two go codes were staggeringly close together, and for whatever reason I wasn’t being given notice to tell them to get a move on. So, I gave the go, and followed the route back towards them. Somewhere along the way, one member of Green squad was gunned down. I shot a couple of terrorists, but met up with a hostage and his somehow dead guard. A few seconds later, Green squad joined us, and we went to the extraction point. With Green squad needing the go code a few more times along the way…

Mission success in 9:07, with 24 terrorists dead, and one RAINBOW K.I.A.. The dead RAINBOW was Santiago Arnavisca, a man that I had personally wounded right near the start of these diaries, and had survived being shot 12 times back in Operation: Perfect Sword. We would have a couple of weeks until our next sortie, more than enough time to hold a funeral…