There was a cutscene of some guy named Crespo who was opening a wing of a hospital, then more news about Venezuela's oil tankers. Fearing terrorists taking them, the US military had given them escorts…

Which brought us to 29th October 2007, with RAINBOW being deployed to Oil Refinery in Curacao, Dutch Caribbean. Terrorists had gone in, placed bombs and taken a single hostage. She was going to be killed if they knew we were coming - so we had to ensure they did not.

Deploying, I led the way carefully forwards, not wanting to be surprised. A terrorist ran around the corner and began shooting me. I returned fire, in time for a rocket to be fired from about 10 o’clock, exploding me. Mission failed in literally seconds… 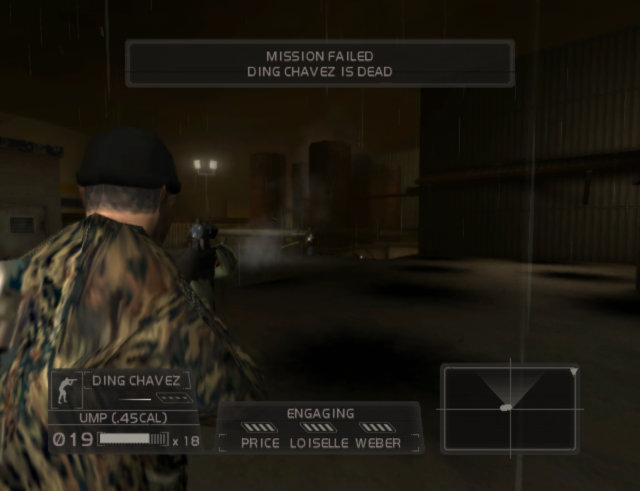 Redeploying, we edged towards the corner only for a rocket to squeal past us and explode some boxes. The terrorists could somehow see us through the wall, it seemed, but we ducked out and shot three terrorists. Down a slope, I had the squad open a door where they shot a man, then I shot another one as I retook the lead.

Sneaking a peek around the corner ahead, I spotted two more terrorists as I started getting shot in the back. The squad eventually killed that guy, while I took out one of the men around the corner. After shooting the second guy non-fatally, I sent the squad in to finish the job. They found nobody there. There were no doors, and no body, as if he had just disappeared…

We went through the door where I had been shot from, and through into a control room of some kind. My men shot a terrorist inside and I went to check for anyone else before getting once more shot in the back. My squad apparently killed him, as they said he was down, but I couldn’t see any corpses. Not even the first person they had shot… 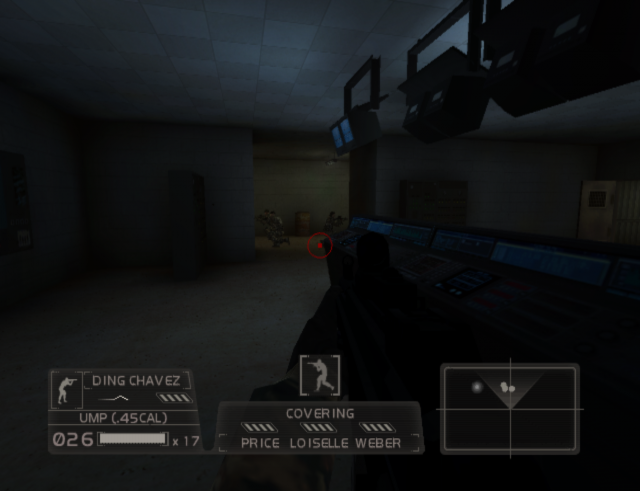 Lots of monitors doing who knows what

Sneaking around through the corridors, I received a shotgun to the face the moment I peeked around a corner, then shot the guy. I sent the squad into a room where they shot a man, then made them disarm the bomb that was back out in the corridor.

At that moment, two terrorists burst out through the next door that I was going to send my squad in. Both were gunned down, and yet somehow I was still shot despite being ducked down behind a member of the squad, and not seeing the terrorists have a chance to return fire.

We went through some kind of processing room, then down some stairs where we shot the lone terrorist on the bottom floor. Sending the squad into the corridor, they shot another terrorist. Ordering them to flashbang the next room, they took out one or more terrorists. With the corpses disappearing, it was difficult to ascertain exactly how many were being killed. 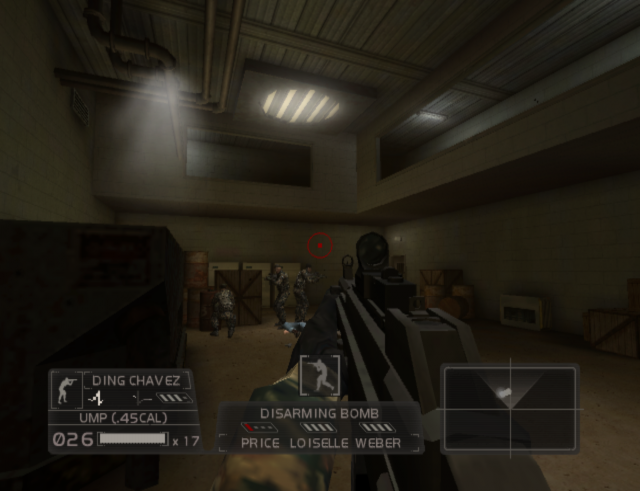 I'm sure Price is doing fine

Opening the door at the end of the hallway myself, I was spotted by multiple terrorists and fell back. My squad and I shot three or four men, including one on the floor above us, before I ordered them to disarm the bomb. With the facility safe, we could focus on rescuing the hostage. A door opened and I shot the terrorist who was far, far away from it and yet somehow the only person inside the small corridor, and it was on to the next part of the mission.

We went up some stairs, now outside, then back inside through a nearby door. There was a terrorist inside who my squad shot, then I sent them into an empty room. Opening the next door myself, I shot the terrorist in front of me three times before he surrendered, but his friends kept firing. After killing them, I ordered my men to handcuff the third while I checked out this new control room.

Out through a hallway and an exit door, were in a room with a lot of ventilation and a few tankers of chemicals. My men shot a bunch of terrorists, and I helped shoot one who appeared to have a rocket launcher, but no chance to use it. Annoyingly, my men reported the room clear before the rocket man and his buddy appeared from, if my squad was to be believed, nowhere. I suspected a door below us, however. 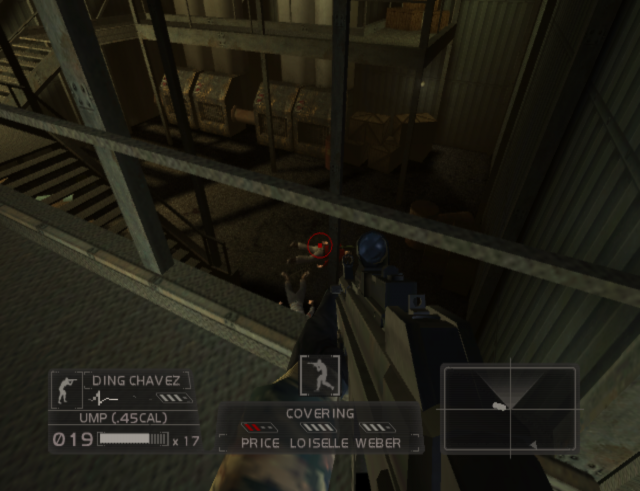 My hunch bore out, and we went through the corridor to a door. Having my men flashbang the inside, they came under heavy fire and Eddie Price was incapacitated. I went out and shot two men, before John Clark told me to take out the men with RPGs quickly. One of the terrorists fired a rocket at a wall, so I shot him, but a large rolling door opened and I came under heavy resistance. Returning fire - having forgotten to order my men to join me, an RPG exploded nearby killing the hostage. Mission failed with 37 terrorists dead, and one RAINBOW down. However, the checkpoint was just before the room where Eddie was gunned down! We redeployed there and went in guns blazing, killing the three men in the first room, as well as one in a room above us shooting out through a window. The roller door opened again, and I shot the rocket guy first, before we wiped out the handful of terrorists.

After that, we handcuffed the hostage (which I have learnt since the previous part is an actual practice), and the mission was a success. 41 terrorists dead, all RAINBOWs still alive. Not that it mattered, as the next mission required just me, as Ding Chavez, and Dieter Weber…

It was a few days later, 4th November 2007, when Operation: Island Estate kicked off. Angered by our screwing up their plans at the refinery, terrorists had taken the oil company’s CEO and his wife hostage. To avoid spooking the terrorists, it was a two-man operation… At least it was somewhere nice?

Deploying on the driveway - judging by the car which had recently crashed into the house - we went up carefully, past a boat and in through the door to the kitchen. Having sent Dieter in first, he shot one or two before I followed and shot another. A third terrorist emptied a magazine into the wall somewhere, before we left the kitchen and Dieter killed him.

Downstairs we went, and followed the hallway. I shot a terrorist around the corner, then another who came down the stairs at the far end of the hall. We snuck towards the stairs, before a grenade fell in front of us. Backing up, we avoided being injured, and I looked up the stairs to shoot the grenadier before heading up. Following the hallway, I shot two men who didn’t see me, and waited for a third to come up some stairs to investigate. Unfortunately, he did see me. However, he got into a firefight with Dieter, and I shot the guy. After discovering that we couldn’t use the door downstairs, we went through the door towards the bedroom. As there were two doors leading inside, I ordered Dieter to take the left, whilst I opened the right.

We went in, and I shot the terrorist right in front of me. I’m pretty sure the second terrorist shot the hostage once or twice, but Dieter and myself gunned him down in short order. With a really out of place audio clip with SNES-level quality, the hostage told us to save her husband who had been taken downstairs. Clark echoed her concerns, telling us to be careful, so we headed for the door that we couldn’t open. It turned out that the wife had come with us, which was why we hadn’t handcuffed her. Opening a door, I shot the guy outside - but not before he shot the wife. She shouted asking what was wrong with “you”, before coughing repeatedly and distractingly. As such, I blundered outside to Dieter shouting “take them out, Ding!”. Two men to the right blasted me before we could shoot them, and then I came under fire as soon as I opened the next door.

Luckily, I had managed to avoid most of it, but I was low on health as I barged after the guy and shot him while he reloaded. Continuing down the hallway, I reloaded - just as the door opened. The terrorist saw me, turned and gunned down the hostage.

Mission failure with 16 dead terrorists and a dead hostage. And one complaining about being shot. Again, luckily the checkpoint was just before we came outside, so we redeployed to that. Opening the door again, the guy wasn’t there. He wasn’t far away, but we shot him without him getting to fire off a shot. The wife, however, still coughed and spluttered as if she had been. Leaning around the door, I shot one of the men above us, before moving out slightly to shoot the second.

I ordered Dieter to go inside the next door, where he shot at the fourth man. He was, however, shot in the back by a fifth terrorist that I hadn’t realised was there. I shot that guy, and we strove on through to the final corridor. Slowly making my way to the end, I opened the door. The terrorist saw us and turned to shoot the CEO - but I gunned him down.

The mission wasn’t over, however. Clark called in a chopper, and we were to hold this position until it arrived. I closed the door, figuring that terrorists would stream towards us that way, but it was for naught. Instead, terrorists began running over from the part of the building across the way. It was tense going, and both Dieter and I were very low on health, but the chopper arrived and started shooting at the enemy. Mission success, with 27 dead terrorists. Thankfully nobody had to smell napalm

The cutscene showed us some politician at a rally talking about how they wouldn’t be selling anymore oil. It cut to a meeting between two men, presumably Middle-Eastern given the music choice, in a revolving restaurant. They were talking about the politician, and how he would be announcing that he would be running for president of Venezuela. How that would fit in with my mission, I was eager to discover...