Having caught the Dutch train and cleared the airport, we were heading to Milan, hot on the trail of The Copycat: David Newcastle…

The UN Secretary-General, Lord Nigel Cameron, had been taken hostage in his hotel along with some hotel staff. We were being sent in to get them out, and failure was not an option. Which, despite the incredibly long briefing, I still wasn’t made aware of how that differed from our previous missions…

RAINBOW recommended that two teams take both buildings at once to minimise risk. I put together a single team and sent them in, with a plan to go up to the first hostage to grab him, then go upstairs to a sniper on the roof before heading across to the other building and grabbing those hostages. Going by the estimates on the map, it wouldn’t be too much hassle. The middle of three floors

We deployed and headed inside, with one of my squad killing someone just inside. Heading upstairs, I opened the door to the first hostage - and we were all gunned down without firing a single round. Failure in 1:05, one terrorist dead.

Redeploying, we went inside, killed the guy and went back upstairs. We took out the terrorists inside, then grabbed the hostage and went for the stairs. Which is when the hostage was shot by someone I hadn’t noticed… Failure in one minute exactly, four terrorists dead.

So, I deployed once more and managed to grab the hostage, and kill the guy who shot him. We went upstairs, and I checked my heartbeat monitor, spotting a terrorist in the room before we went out onto the roof. I opened the door and shot him, but had to quickly shoot the two men outside on the roof. By the time I got out onto the roof itself, and shot one of the terrorists across the way, one of the others got into position and shot a hostage… Failure in 2:21, nine terrorists killed. 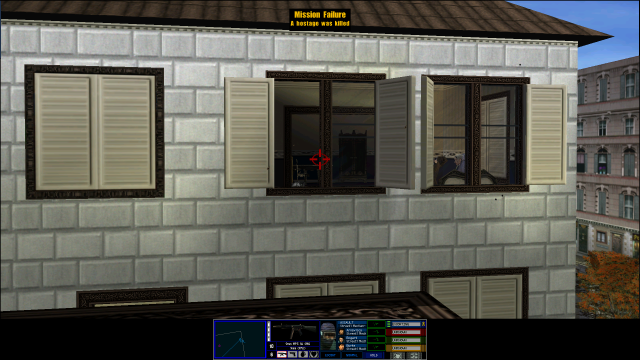 Not quick enough on the trigger...

I tried another go where I went to get the second hostages before killing the terrorists on the roof, but one of them was still killed. Failure in 2:32.

Going back to the planning stage, I arranged a second squad, their goal was to follow us, then head up to the roof. At the Go command, they would burst out onto the roof and gun them down. So, I redeployed.

We went upstairs and grabbed the hostage, then split up. I went into the next building and killed a few terrorists in one of the rooms, before heading to the hostage room upstairs. I signaled Red squad, waited two seconds and opened the door, shooting a terrorist as I did so. I hurried into the next room to try and put myself between the hostages and bullets, and we shot the other terrorists. I checked across the way, and Red squad were cleaning up a stray. 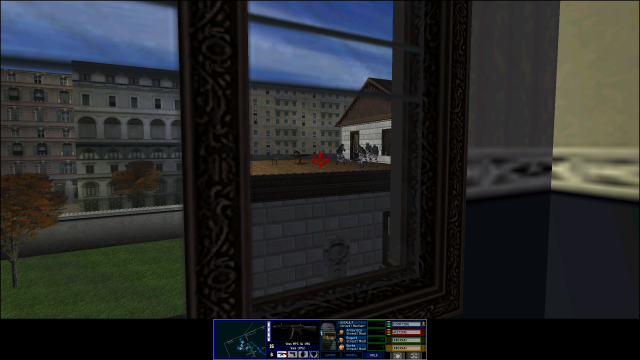 Leading the hostages downstairs, my squad shot another one or two terrorists, and as we got outside I remembered that the plan had shown a terrorist looking out of a window towards the extraction zone. I looked up and edged back, then shot him as he lifted his head to shoot one of my hostages. Him down, I hurried around to the extraction zone.

Mission success in 3:41, with 16 terrorists killed. Which led us to the final mission - Operation: Empty Cloud. David ‘The CopyCat’ Newcastle had led some mercenaries to Athens, to kidnap athletes in a copy of a 1972 attack in Munich.

However, Lord Cameron had provided us some intel that he had overheard, which led RAINBOW to guess at Newcastle’s next move. Therefore, Olympic security had prevented them from taking any athletes hostage - so instead they had taken the security officers hostage instead. Planning a course around to kill everyone I could find, before heading in to finish off Newcastle, I deployed. We went through the front doors and shot the first couple of men without issue. Surprising, since one of them was in big, heavy armour. I followed my route to clear each room, but the second room I entered the hostage ran right in front of me as I shot a terrorist. Mission failure in 52 seconds, with five terrorists dead. The next attempt didn’t fare much better, as the hostage ran outside and was shot by a terrorist who was roaming the hallways… Failure in 54 seconds, three terrorists dead.

During my next attempt, I decided to set my status to “Escort”, which would make the hostages not run away. So, I went through doing pretty well as I cleared the three rooms, telling each hostage to remain where they were before moving on to the next one. I moved into the next section and shot a terrorist, but an alarm went off and a hostage was apparently killed. Mission failure in 2.35, 10 terrorists dead.

Hurrying through another go, I had the same result in 1:49, with two RAINBOW wounded and 10 terrorists dead. So, I decided to go for HQ’s plan, just to give it a whirl. It set up four teams of two operatives, and was quite a bit more intricate than mine. So, I deployed. We entered the main entryway, and I told them to go as I opened the door. We went in, sweeping to the first rooms. Another go, and we saved the hostages smoothly. Things were going well! After one more go, we headed upstairs - which is where things unraveled.

Despite my insistence of people going, even waiting and backtracking - people didn’t go when I ordered them to. I decided to keep going through my own waypoints, and entered the room where my last two attempts had failed. I shot one terrorist on the gantry with me, then shot the one close to the hostage - and the alarm went off, killing a hostage somewhere. Mission failure in 2:57 with 14 terrorists dead.

This seemed to be working, so I redeployed. Things went similarly, but I realised that I hadn’t tried the Delta go code - so things went a little further, though one RAINBOW was killed and 15 terrorists died, in 2:48. Another redeployment, and the same hostage was killed a third time. It took 2:25, two RAINBOW were KIA and 15 more terrorists died. Yet another one, and it took 2:30 for three RAINBOW and 15 terrorists to die… I was so close, I just needed to work out how to prevent this one hostage from being killed by the five terrorists who wanted to murder him the moment I opened this door that was being watched by Newcastle…

We deployed, heading inside and killing the three terrorists who weren’t inside rooms. We cleared the rooms, and I headed upstairs with Green squad to clear the auditorium. Back downstairs, with go codes being used liberally, I went for the doors into That Damn Room. I shot the first one as the bottom doors opened - alarms went off, bullets flew and I aimed at the other end of the gantry to kill anyone who came out of the room - two men as it turned out. I went for the final room to kill Newcastle, and arrived moments after one of the other squads had shot him. Mission success in 2:06, 20 terrorists killed. Despite the gargantuan effort this expansion took through these four parts, that was it. It had taken from 13th of June 2004 to 24th of August 2004 to find and kill the one responsible for the attacks, and if not for retrying over and over, it would have cost dozens of poor RAINBOWs their lives. But yeah, that was it.

I honestly didn’t enjoy this expansion as much as the main game and other expansions. I appreciated how challenging the others were, but this was far too difficult.

The maps were brilliant, with some great designs. The graphics were decent enough. The voices - well I’m hoping that the British (though clearly not British) Kevin Sweeney doesn’t return. Clark is alright, and though whatever Command’s name is can be a little stiff she’s fine. 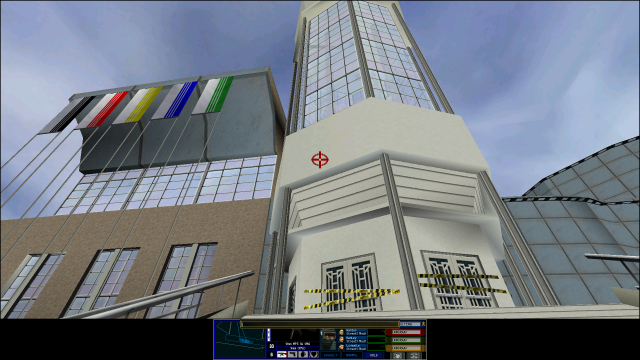 Honestly, though, I’m glad to finally be done with Rogue Spear. You know, unless the next game - the PlayStation exclusive Lone Wolf - is built on the same engine. But join me for that, next time!