On the trail of the smugglers-turned-terrorists The Coyotes, I had rescued some hostages, but had to chase after some of them who escaped in a van… 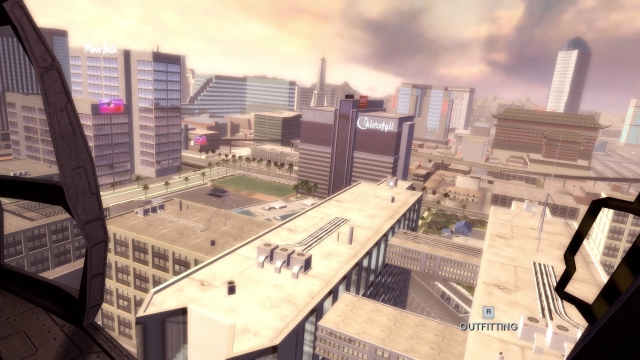 Operation: Hawkins Recreational Facility began at 1936hrs on the 2nd of July 2010. The helicopter dropped us in the parking lot, and we immediately came under fire from tangos. There were a few civilians around, so we couldn’t fire and grenade quite as indiscriminately as I’d have liked, but we fought through a couple of waves of them, reaching the white van. The back door was ajar, but we found it empty.

Moving into the first building, the Arnett Center. The lobby had a few tangos guarding it, but we wiped them out and headed upstairs. Sharon Judd suggested it, so I figured it might be a safer route. Sending my squad ahead through the door, we shot a few tangos and moved on. Thinking I was surprising a tango coming out of the toilets, he shot me several times the instant he cleared the doorway, much to my annoyance. At the top of the nearby stairs, we got into an extended firefight with some entrenched tangos. It was messy, but we eventually headed down and followed the hallway to a turning, where a hail of bullets peppered the wall beside me. They weren’t shooting at me, however, they were firing at a civilian who ran past me.

We shot the tango who had fired, then his friends who were nearby, and continued to follow the hallways. Reaching a door, we went down some stairs and went down a level, entering a door and shooting the men inside. The walkway led us to some more stairs and down another level. Through a couple of doors, we reached the climbing room, which had multiple levels with several climbing walls inside. There were more than a few tangos inside, and it took a few long minutes to get up to the top whilst fending them off. 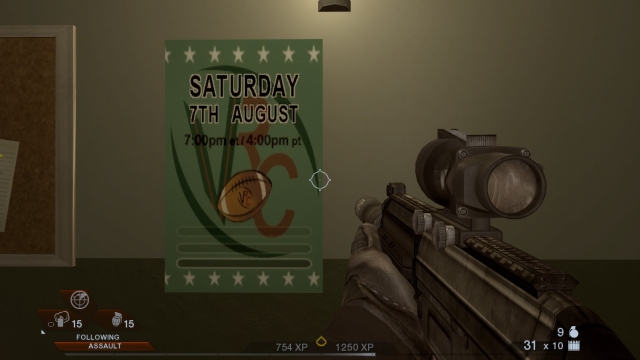 Through a door on the top level, and while I neglected to restock my ammo at an equipment box Bishop mused that this was not a hostage situation, they were going to use the chemical bomb they had brought. At least I think she did, the music was super loud and drowned out her and Michael’s voices…

Exiting into what I assume was a second lobby, we declared the building clear. Our objective was updated to clear the nearby Goodman Center next, so we exited through the doors on the upper level and checked the angles for tangos. There were two more tangos below us, one nearby, and once we opened fire there were a load more in the bridge connecting the pathway to the Goodman Center.

Leading the way around to the left, I quickly checked under a door with the snake cam before entering. It was a refectory with a café and a couple of tangos. Unfortunately, they spotted us as we were setting up behind cover, and a firefight began. I’m not sure how many tangos were above us, because of my position I couldn’t see if my squad were killing them or just firing at them. Exiting out the rear, we followed the hallways down some stairs and past a couple of gyms. I stopped when I spotted an exit door, and entered the weights gym, moving down to the exit door and to what turned out to be the exit. Bishop confirmed that the building was clear and that we were moving on to the Baker Arena across the road. Then a sniper shot at me through a window.

That kicked off another extended firefight before we could cross to the arena and enter the lobby. I ran out of ammo with my 552 Commando, so had to swap to my backup. I made sure to pick up one of the tangos’ FNCs so that I wasn’t underpowered, and we made our way towards the back so Michael could blow the shutter open. However, Sharon in the chopper said that the terrorists had just dropped the bomb into the ventilation system on the roof!

Once the shutter was blown, we hurried towards the back, finding the doors locked. Michael tried to shove them open, but the civilians inside were screaming, and gas was leaking out. Even if we set a charge to blow the doors, it was already too late for the people inside. The screaming stopped abruptly, and we were told to get to the hazmat team outside for decontamination. Luckily, there were some chatty tangos in a storeroom along our route, so we had a bit of a firefight with them to blow off steam. Following the hallway into a warehouse, I sent the team in ahead of me to draw the inevitable enemy fire. A short firefight later, we headed out through the rear exit and out into the decontamination tent. Once we were cleared, we restocked at some equipment boxes and engaged the tangos who had kindly waited for us to leave the tent.

During the firefight, with a bunch of tangos above us as well as ahead of us, the tangos blew up part of the building to block the main doors. Once the area was clear, which included having to use four or five grenades to hit two tangos, we went up some stairs and around, encountering more heavy resistance. We went over the covered walkway and entered the building. Checking under a door to the left of a room, I tagged two tangos and told the squad to clear it. The moment the door opened, I was shot through the wall by a shotgun, but the squad entered and took care of the immediate threat inside the office. 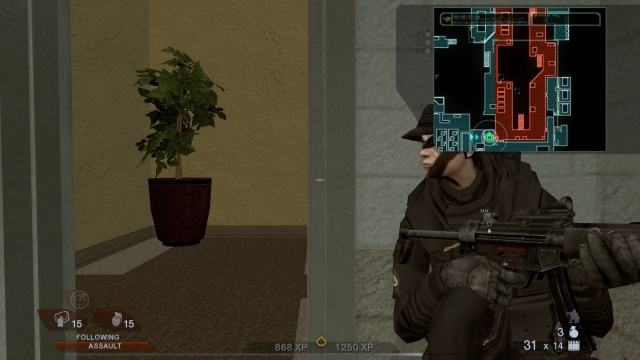 Heading through a door marked “employees only”, Sharon contacted us to warn about the atrium ahead. It likely had a bunch of hidden tangos, so she suggested that we head on up to the roof, and rappel through the skylight. Going upstairs, I checked the coast was clear with the snake cam, and we went out. Looking down through the skylight, I shot as many tangos as I could find, nobody reacting to the breaking glass as I did so. As I had my silencer equipped, they didn’t know where I was.

Once the upper level of the atrium was pretty clear, we went back downstairs, rather than rappel down only to get shot by stragglers. Clearing the rest of the atrium, we exited out through the back, finding two men in hazmat suits chatting. There was a third without a helmet, limping away - just like Miguel Cabrero, the leader of the terrorists, who had been shot by our team in the helicopter! We ran after him, having to go around the long way. Unfortunately, they were prepared and made us fight our way after Miguel. Once the car park was clear, we followed the route he had taken, going through an alleyway, and into some residential gardens. We encountered heavy resistance, but the chopper kept an eye on our target.

Reaching the end of the row of gardens, we entered a building site, where they appeared to be constructing a new casino. Weaving our way through the site and dozens of tangos, we finally caught up to Miguel. He refused to tell us where the second bomb was until we threatened to shoot him, whereupon he told us it was on the way to the convention center. After folding like a house of cards, Bishop goaded Miguel into going for his gun, and I shot him. 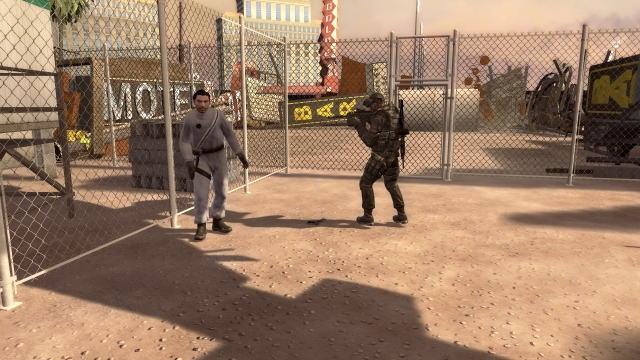 The helicopter landed, and we boarded, setting course for the convention center…