The Coyotes had killed hundreds of people with a chemical weapon, so we were on our way to keep that from happening again…

Operation: Las Vegas International Convention Center began at 2042hrs, with us receiving a call from NSA Deputy Director Lawrence calling us to berate us over the deaths at the recreational center. We were dropped at the south entrance, on the roof. Sharon listed our options: take the stairs or rappel down through the window. We headed down the stairs to be safe, and once inside the main lobby were almost immediately spotted and pelted with flash grenades. My ears were ringing for about a minute, before we managed to shoot whoever had been throwing them over and over again. 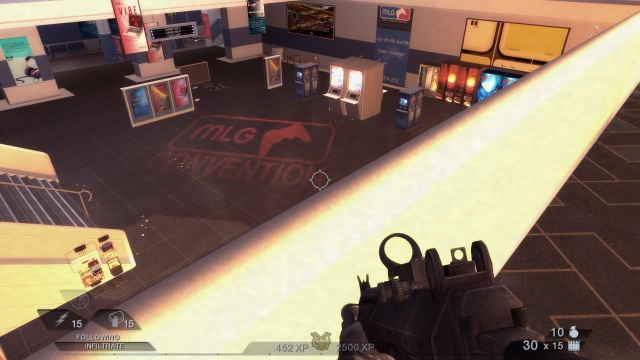 Fighting our way down to the ground level, it turned out that a technology and gaming convention had been going on at the time. Or both were - it wasn’t very clear where one ended and the other began. We followed the hallway around to the main hall with booths set up showing off various flip phones, laptops and audio equipment. It was, of course, full of tangos who needed killing.

At the far end of the hall, we continued following the corridors to where it split in two. I sent the squad to the right, and I took the left. They had the easier job, as the one tango I faced had a riot shield and a pistol, and required quite a bit of killing… At the end, I joined up with the squad and we went upstairs, coming under fire again as we did so. We had been doing an absolutely awful job of remaining quiet, and that remained the case as we had an extended firefight with tangos entrenched in cover down the hallway we needed to use. 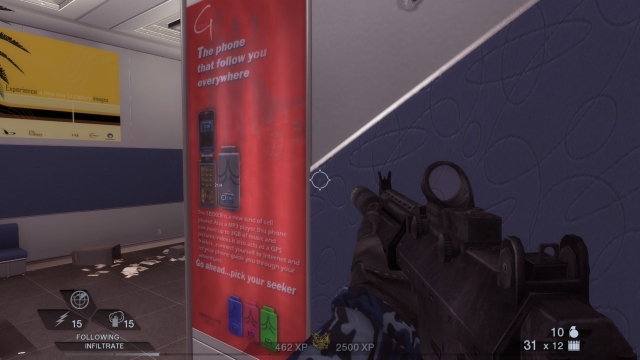 Once the route was clear, I restocked my ammo in the only room we had come across that wasn’t part of a large hall. Leaving the room, we went down some stairs to a couple of doors leading outside. Using my snake cam I could see a loading area with a bunch of tangos patrolling. Ordering my squad to take the right-hand door, I went for the other and ordered them to go in. From the safety of the doorway, I shot most of the tangos that I could see, and knew that my squad was relatively safe behind a truck trailer. 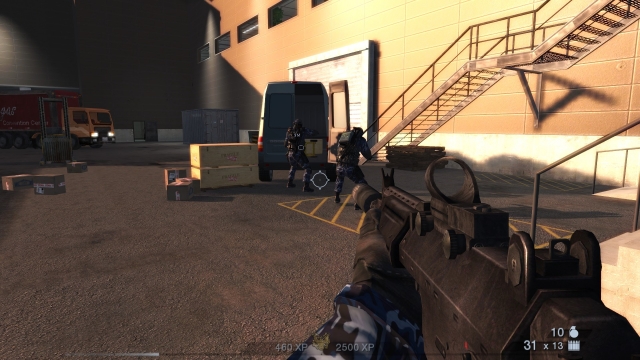 After a firefight, we checked the white van which, of course, was empty. Sharon told us to find Dennis Cohen in the security office, as he was our only lead. She also suggested that we attack from the top and the bottom, so I stacked up the squad on the warehouse door in the reception, and headed up the stairs on the outside. Quickly checking the snake cam, I saw two tangos with one standing right in front of me, so I opened the door and fired. In the moments it had taken to put the cam away, he had moved, and I’d just alerted everyone.

Ordering the squad to engage, we fought through the warehouse, to a door on the upper level. It led to another warehouse section with a couple of tangos, so we went in and shot them, alerting the tangos which I hadn’t seen on the level below us. We killed them, and some who came up to our level, and continued into another warehouse full of boxes and tangos.

With the way finally clear, we exited the warehouse into a corridor with a tango, who we shot, and followed it around to a couple of doors with two tangos behind it, talking about videogames. Since we were basically out in the open, our only cover being glass, I quickly went through a nearby door and shot a tango. I shot another one who had his back to me in the security room, and then a third who was coming around the opposite corner to me. 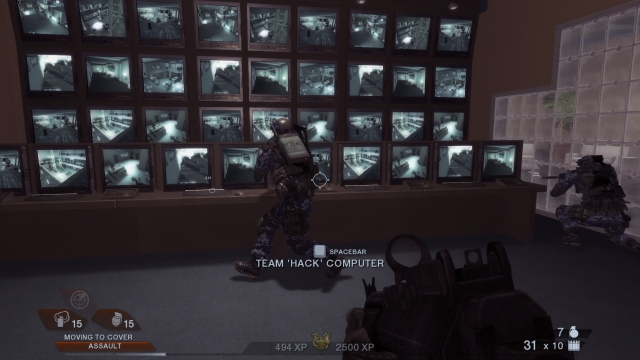 Inside the security room, I had Jung hack the computers and he patched the feed into my heads-up display. The leader of the Coyotes, Alvarez Cabrero, was talking to Cohen who was tied to a chair. Someone mentioned Irena Morales, and Sharon explained that Logan Keller was currently pursuing her in Mexico. Since we now knew where we might find Cohen, we left the room and went downstairs.

Exiting the corridor into the main convention hall, we were advised to keep things quiet. If we alarmed the terrorists, they’d kill Cohen, so I made sure I had my silencer equipped, and activated the thermal scan to get an overlay of what to expect. I cautiously led the way through the various areas filled with PCs and staging areas for games such as Far Cry 2 and Diplomate Ultimatum, shooting a small handful of tangos as we went. Before reaching Cohen, we had a messy firefight in a rest area, but thankfully that didn’t appear to matter. However, when we approached the final area, Sharon warned us to be quiet, and potentially take the high route to ensure Cohen’s safety. 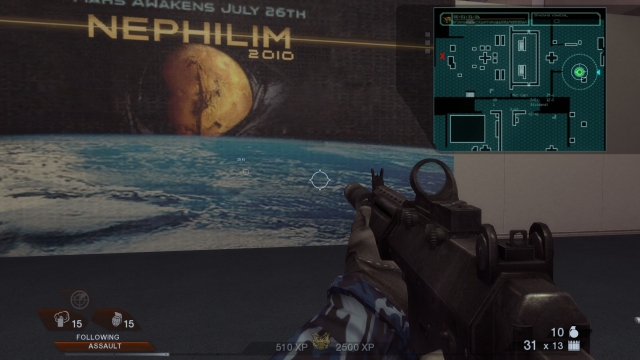 Unfortunately, I had to reload this checkpoint, as my squad somehow got stuck behind a wall that they hadn’t even been close to, and I couldn’t free them. It was weird…

We went up some stairs to an upper level and shot the three men threatening Cohen, before getting on the stage to disarm the bomb strapped to him. It wasn’t the bomb we were after, but it was still going to kill him. Of course, while Michael worked on that, Jung and I had to fend off a few waves of tangos who rushed in to kill us all.

Once the coast was clear, we discovered that the bomb was on its way to the monorail, to be sent straight to the nearby hotel. However, when we left the room we had to fight a whole bunch of tangos as we headed back the way we had come. However, we exited through a different door, and headed upstairs to head for the North Hall. 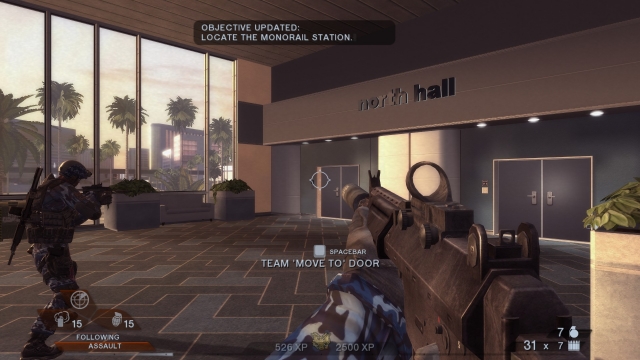 Exiting through some doors, we shot some tangos, then headed downstairs to the ground level, killing even more tangos. Going past some BlueDevil Energy stands and the food court, we resupplied before going upstairs. Sharon suggested we go through the food court via the upper level, through some toilets, for an easier time, so we did so. There were fewer tangos than I had expected, but once it was clear, we continued into a long hallway, where smoke grenades were thrown at us, and we killed a bunch more tangos.

Resupplying again, I checked out the room nearby and led an assault against the tangos inside. It wasn’t required, but I didn’t want them sneaking up behind me. We fought more tangos outside some shuttered storefronts, then went in through a door to resupply in some narrow corridors. We were now at the monorail station, and Sharon suggested that we assault from one of the side stairs, rather than the main entrance. Not that it really mattered, as we had a massive firefight out the front before taking the right-hand stairs inside. 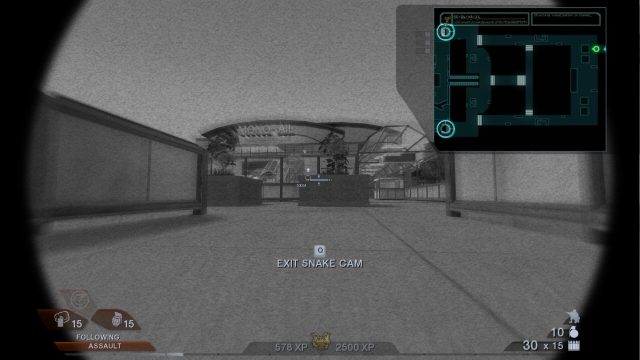 Taking the right-hand door into the building proper, I shot a tango holding a shield before going past the bar and coming under heavy fire. It turned out that there were still plenty of hostiles from this direction, too… Once clear again, we went in through a door on the left through the locker room, and more hostiles, before reaching the main area. This was a sticky situation, with a whole load of tangos all over the place. Even when the ground floor was clear, more came down the escalator to shoot at us.

We encountered more resistance at the top, where we could hear the beeping of the bomb. More tangos rappelled down from the roof, but once it was clear I had Michael disarm the bomb. Or, that was the plan, as when he disabled the countdown, a remote trigger was activated. Worse, the train was automated, and programmed to leave any moment! Bishop had a plan as the train began to leave - have Michael plant a charge on it! As the train left the station, Sharon confirmed that it was safe, and the train exploded. 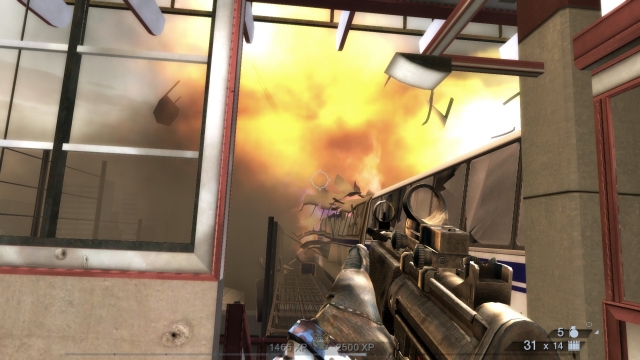 There was no time to celebrate, though, as we were contacted by an agent who had infiltrated a penthouse where Alverez’s men were. He confirmed the roof was clear, and we hopped into the helicopter to fly over…