Having killed an astounding number of the Revolutionary Brotherhood in Scotland, I was expecting more trouble from them…

It was the 18th of July 2009, and Operation: Catacombs had us heading to Paris. Intel had located the base of operations for the United Fatherland Brigade, a group responsible for various attacks across Europe. This was the third terrorist organisation that we’d been sent up against, not counting the people in Operation: Desert Village…

Loiselle, Murad, Raymond and I deployed in the parking lot of a meat packing plant. Two shutters were partially open, and we were expected to go in the lone door - but we could hear tangos chatting. Crouching, I did a wide arc check of the shutters, and started shooting people as soon as I saw them - in a matter of seconds the coast was clear, so we entered the building. I spotted someone moving in the next room, so made sure to shoot him before we went inside, killing another tango in the freezer section. 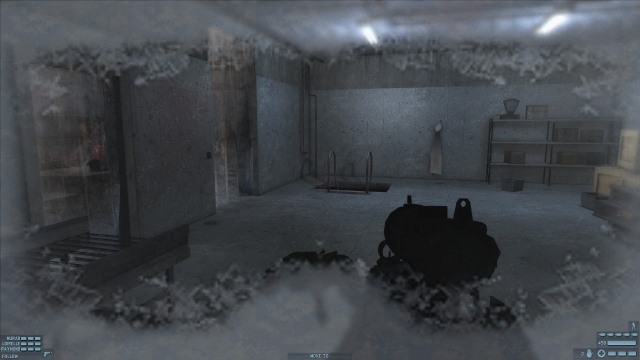 Using the handy ladder, we entered the catacombs. Going around to the right, we began killing tangos and searching around for more of them. There was a tense firefight as we followed the circular path, but a couple of grenades turned things in our favour. After completing a circuit, we headed for the iron door to the next section.

Entering a room, I was almost caught off-guard by a security camera, but disabled it without blundering into its field of view. Just outside the room was a cavern full of tangos, who all died in short order. They honestly weren’t giving me much of a fight! I had the squad breach the door at the far end of the cavern, and inside we found a bunk room with a handful more tangos, who tried to escape death by throwing a smoke grenade. Unfortunately for them, it also obscured their view of us, so two managed to survive until the smoke had dissipated, before we shot them. 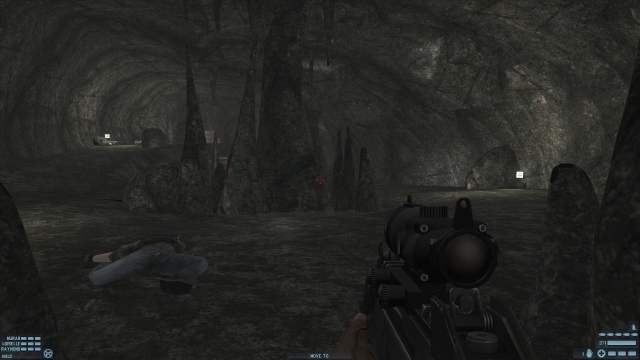 Outside the bunk room was some machinery and a couple more tangos, and the room let out into an abandoned metro station. As before, we started heading to the right, shooting enemies as we spotted them. I ignored the door with the security camera above it, heading down the ramp to the platform, and an abandoned train. A few bullets flew our way, but I shot most of the tangos through the train windows, meaning they didn’t have a good line of sight on me, so couldn’t return fire.

With most of the tangos dead, I decided to use the rear door of the room which had the security camera above the front door. Much to my horror, my squad came barging through the door right in front of me, before I could open it and disable the camera. I don’t think it spotted them, but I disabled it - the room had been empty anyway.

Crossing the train tracks to the other platform, we shot the last couple of tangos, Bravo Team appeared from literally nowhere to check the base over. We had to respond to a hostage situation a little further up the tunnels. Loading into the next area, we followed the stairs and hallways, shooting a few tangos here and there. Passing a security control panel, I saw some metal bars along a thin horizontal gap in the wall. Checking my motion detector, I saw one person below me, and from the shouting as I opened fire at one on the same level as me, there were plenty more. Luckily, as with the train, I managed to kill them all without giving them a line of sight.

Heading downstairs, there had been one reading on the minimap of my motion detector, so I was ready for one more tango to burst out through the door, shooting him dead. Unfortunately, heading down to him was a waste of time, as I had to use the door at the top of the stairs, after cutting through it, to access the main metro line.

With nothing on the motion detector, I made my way to the next doorway, which opened on a balcony above the terminal. There were a few tangos down the escalator in front of me, so I shot them before moving off to the left hand escalator and repeating. Once the way was basically clear, I led my squad down to the terminal, taking a shot at the odd one or two tangos. 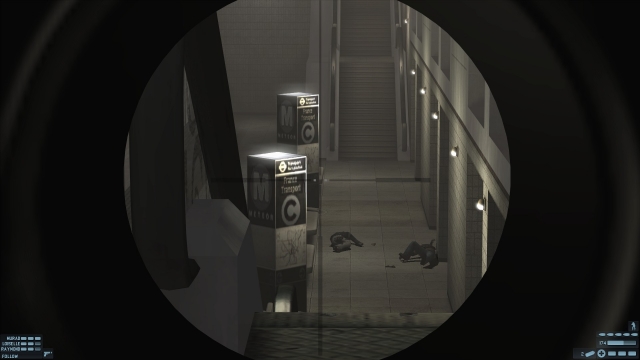 As I approached the hostages, I kept an eye on the upper level ahead of me. As I’d suspected, there was a tango - but none of my bullets could get through the bars to hit him. Luckily, apparently neither could his, so I tossed a flashbang up at him, driving him out of hiding. A bunch of tangos came from the right, but as the hostages had all run away by then, it was a simple matter to kill them. Mission success in 24:36, with 80 dead terrorists.

Operation: Distillery began eight days later on 18th July 2009. As a result of the raid on the United Fatherland Brigade base, Lofquist, Loiselle, Pak and I were being sent to a distillery in Olivet, France. Not for a drink, but because information about another base of operations had been found. 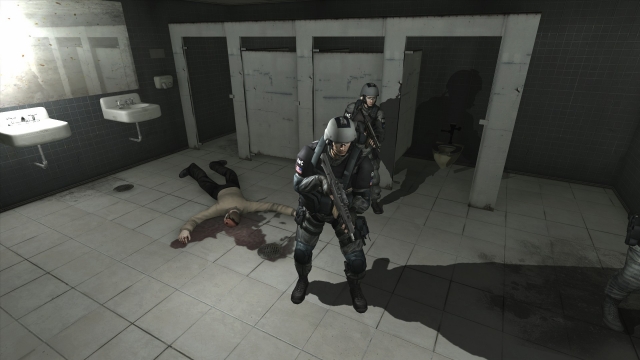 We deployed in the toilets, with a dead body on the floor. I had no idea how we got inside, nor who shot the unarmed dead guy. We left the toilets and went through a couple of doors, shooting the two men in the loading area without incident. My motion detector showed multiple tangos just outside, so we swept them up without incident and entered another building with two more tangos inside.

Leaving the second building, we crossed an open area and went up a ramp, shooting a few tangos as we went. At the top of the ramp we headed towards a loading bay and killed two more tangos. There were two Legion canisters, so at least it seemed that particular plot was still going on. 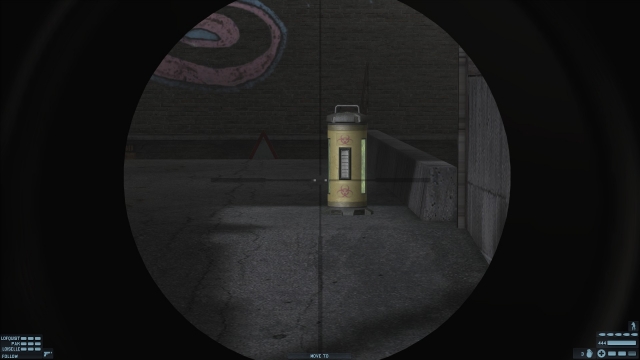 A door led into a room with large vats, but there were only a couple of tangos there. After cutting through a door, the alley it led into had a few more, and ended in another door. There were a couple of dots on my motion detector, but I don’t think I was prepared for the large, open room with multiple tangos, more vats and lots of tubes.

Another thing I was unprepared for were the Legion grenades that Stanley contacted me about, just as one dropped on the floor a short distance away. I backed up as far as I was able, and the cloud of gas quickly dissipated, but that was a worry… We headed up some stairs, killing a bunch more tangos to the left, and one to the right, before swinging around to the right and into an office with a few more. Once the room was clear, I hacked the security computer which I had coincidentally found, and then exited the room. Stanley told me to get to the basement, which I assumed was back to the left where I had killed those guys, but I wanted to check for more tangos.

I climbed a ladder and went up some stairs, killing more tangos before I realised that I was supposed to be up here. Not sure how this would lead to the basement, but we loaded into the next area. Leaving the hallway we were now in, we crossed the roof - and I shot a couple of tangos through the windows of a room we were passing. We entered another part of the building, and I was starting to suspect we had taken the wrong turn at Albuquerque, because Stanley reiterated that we were going to get access to the basement!

The corridor led to a large room which I assumed was above one of the rooms I’d been in earlier, as there were large pipes - and tangos complaining that something wasn’t working. It’s lucky they were speaking English! Nonetheless, I gunned them down, then led the way to a stairwell which led down to, presumably, almost ground level. There were tangos in the stairwell, so we killed them as we went, and then some more who came through a door to investigate the noise. Leaving the stairwell, I shot two more in an elevator, then took a ladder up. 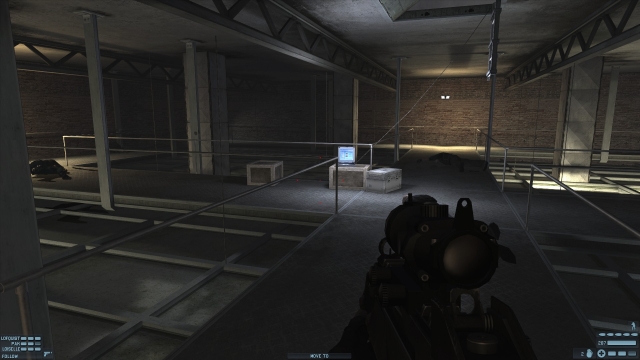 The ladder led me to another ladder, this one leading down into the basement - it was a roundabout way of doing it, but I was finally at my destination. Rounding the corner, I activated my night vision goggles and shot the tangos who were in sight. The basement turned out to be packed with tangos, as well as large casks, and the cold fogging up my goggles did not help in the least.

It took a few minutes, but once the bunch of tangos were dead, we were safe to go into the next area. It proved to be a bit of a maze, with one path leading left, complete with two tangos, and one path leading right. We shot the tangos, then opened the right door. I shot the men inside, then led the way out the backdoor, shooting another tango, then an exploding barrel which killed a second.

This seemed to catch them off guard, as following the path left led to two doors. On the left, they had their backs to it so I opened and shot them. To the right, they seemed more with it, but definitely not guarding against intruders. We cleared another room, then a lone guy in a tunnel, before coming across the firing range. Inside were at least four tangos, and when I opened the door there was more wood in the way than I had thought. Also, while I was shooting the men at the end of the tunnel, my squad were taking their time killing the ones that I didn’t have an angle on, so we came out of that injured - but alive. 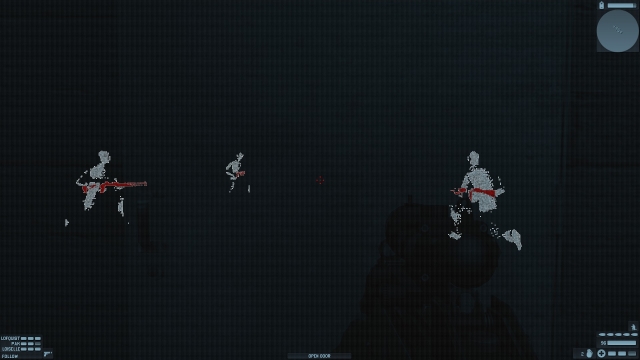 The tunnel led into another training area, with human-shaped targets and tangos.I shot the first two, then opened a door slightly which brought two tangos closer so that I could shoot them. I then threw my last grenade over the top of the wooden walls, killing the last two.

After cutting through the door, a passageway led down to a final tango - and the man we had to extract. His own men had shot him - to prevent him talking to us - so we had to get him to a hospital - which helpfully would happen once the mission ended. Mission success in 28:10, with 102 terrorists dead!

En route to the hospital, I was sure that something would go wrong…