After two missions in Curacao, Dutch Caribbean, we were tracking down the terrorist group that we had been dealing with so far…

Operation: Shipyard began on 10th November 2007, less than a week after the previous mission. We were heading to Puerto Cabello, Venezuela, where a shipyard was under terrorist control. They had rigged the place to blow, crippling the country’s ability to build oil tankers, and thus export oil. Which the guy I had seen running for president didn’t want the country to do…?

We were to expect heavy resistance, and after being shot with an RPG seconds after deployment just two missions prior, I was expecting it. Or so I thought.

Deploying, we carefully moved forwards and around some shipping containers. I shot someone, then sent my men forwards. Eddie Price was gunned down in moments, before my men had killed the three men who had shot at us. To say this was a surprising amount of resistance would be an understatement. 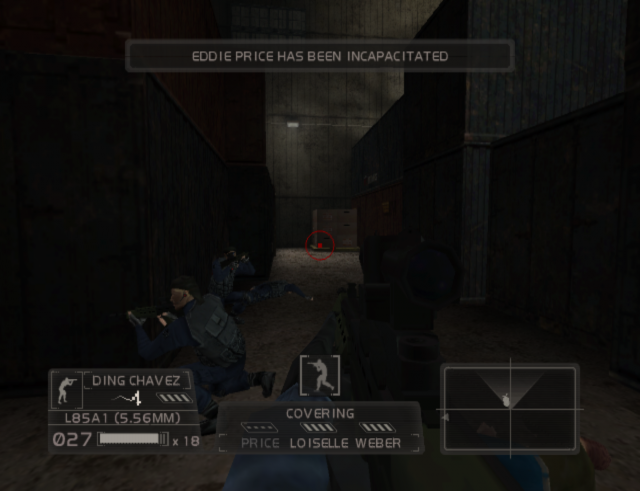 For crying out loud...

Solo, I checked around the other side of the wall of shipping containers, and came under fire from approximately four terrorists. I was hit a few times, but managed to kill them all fairly easily. Regrouping with my men, we went onwards, killing another terrorist before checking out the open doorway into the warehouse. Where someone had just thrown a grenade.

Luckily, we were stood away from the door and were unharmed, so went in and shot him. Through a door at the back, my men shot another terrorist before we went up some stairs. At the top was an office, and I saw a terrorist run past. Thinking that I had him, I blundered out into the hallway and came under fire from two terrorists, who escaped into another room. Giving chase, I came face-to-face with a room full of terrorists. 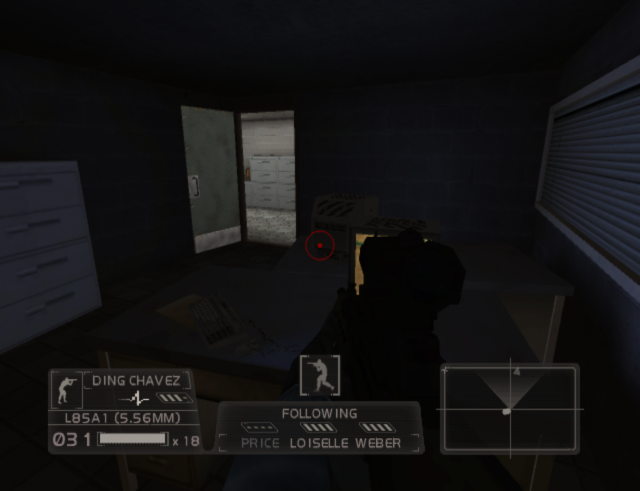 Wish I could turn on lights...

Laying on my trigger, I emptied a magazine before falling back and sending my men inside. With the room clear, I once more blundered into the adjoining hallway and was surprised by two more men. I was not enjoying this pattern…

With them dead, I did a sweep before we went into the next room, which was another office, and led to the main warehouse. A warning went out - the bombs were attached to barrels of accelerant, so we had to mind where we were firing or get blown up! We had a pitched firefight against several terrorists on the gantry across from us, and I was low on health. We went across the gantry and came under fire from the ground, so returned it.

Then someone shot a barrel and a bomb went off. Mission failure, with one dead RAINBOW and 19 dead terrorists. It definitely felt like more… 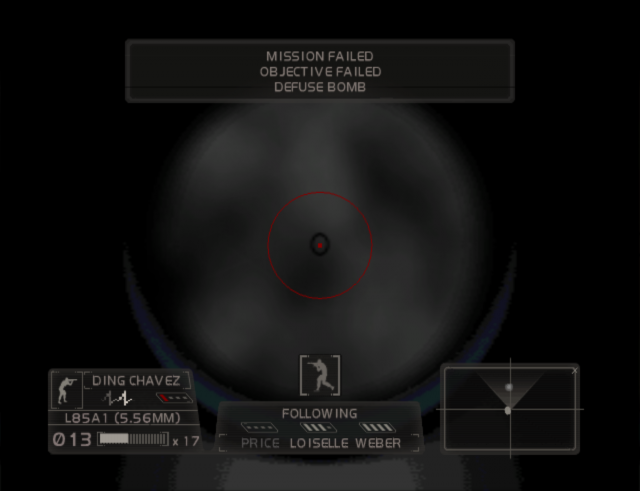 Obviously, I couldn't see what was going on

Since I didn’t want Eddie to be dead, I decided to redeploy at the insertion, which we did. Going a lot more carefully, this time Eddie only took damage from the grenade thrower - who once again threw a grenade while we were miles away. I had been doing most of the killing, since I knew where the enemies were, and this didn’t change as we went to the stairs inside with me shooting two more terrorists.

Rather than chase the men into the office, this time I took my squad the other way around, as it was a circle. As I ordered them into the door before heading around to shoot the men in the office, it turned out that I actually just chased the terrorists around into my men’s waiting guns.

We went into the main warehouse, this time with my men concentrating on everyone, and me concentrating on the one who had shot at us from the ground, and resulted in the explosion. It actually turned out that there were several men on the ground, so I was a tad worried that we’d fail again. However, after a brief skirmish they were all dead, and everyone except for Dieter had been wounded in some way. 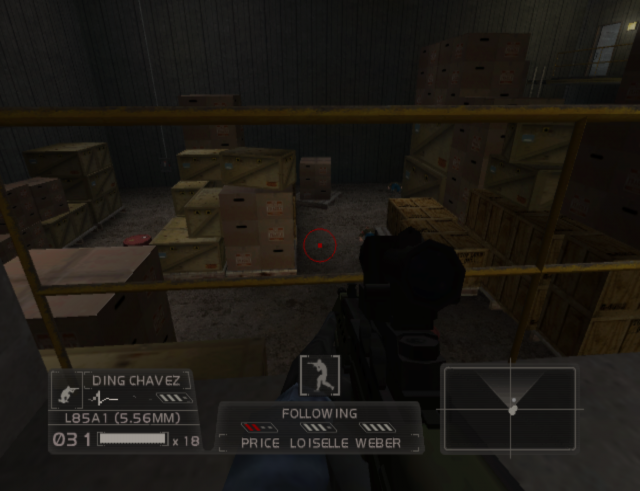 After heading down to the bomb, I had the squad disarm it. Clark told me that the second bomb was below us, on the warehouse floor. As I was pretty certain we were on the ground level, I was uncertain how that worked, but I went through the door and headed down some stairs, completing the first part.

As soon as the next part had loaded, I could hear the telltale bleep of a bomb. One of my squad commented that the bomb should be close, and I refrained from slapping my forehead. We snuck forwards, and I followed the beeps to the left, into a room with a desk and a single terrorist. After shooting him and heading the opposite way, I leaned into a larger room and shot another one in the back. We entered the room and shot another man before I told my squadmates to disarm the bomb we had found.

Then two sets of large doors in the ceiling opened up, revealing three or four terrorists, who began firing down at us. We returned fire, managing to survive as well as disarm the bomb. Clark told me that the third bomb was strapped to the ship’s hull, so we had to head there next. 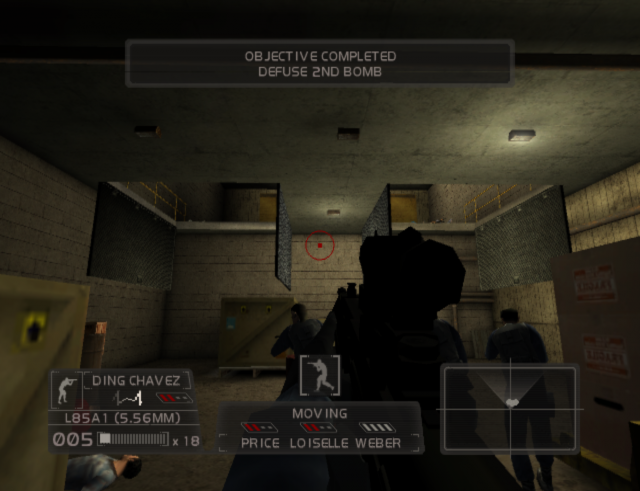 As we entered a long hallway, I just knew that there would be terrorists behind the door at the end. Not halfway down, there was the sound of the door opening, and two terrorists came out - somehow I shot the exploding barrel behind them, coating them both in flames and death. With a jovial shrug, I led the way to a staircase and shot the man waiting at the bottom, then went downstairs.

At the bottom, a timer appeared - one and a half minutes. Freaking out, I blundered out into the room, where we shot several terrorists before being overwhelmed, and I was killed. Mission failure, 40 terrorists dead, everyone a range of injured… 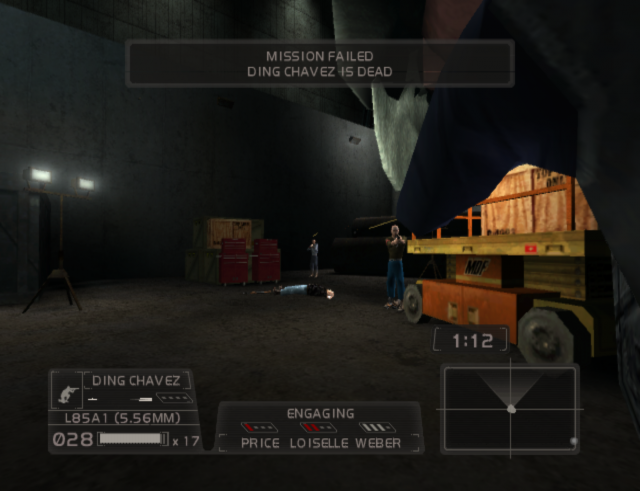 We redeployed at the checkpoint, and went downstairs again. Despite ordering my men into the room, behind cover, Louis was incapacitated. We managed to clear the room, and even capped the terrorist who appeared from behind some sliding doors above us, before heading into the next area. It was clear, so we carefully went into the third area through the right entrance, where the bomb could be heard.

Despite some careful cover usage and shooting a guy in the head who was hiding behind a crate, I wasn’t ready for the two terrorists behind more sliding doors, getting gunned down again. Mission failure, 46 dead terrorists, two dead RAINBOW… So we redeployed again.

Things went a lot smoother, this time clearing the first room with the aid of an exploding barrel. We headed through into the second room, but this time used the left entrance. The two behind the sliding door, as well as most of the other terrorists fell pretty easily, but I was very low on health. I sent my men to disarm the bomb, with less than 30 seconds left, and they came under fire from the final terrorist. I blasted a barrel, killing the terrorist - but also setting two of my men on fire. However, the bomb was disarmed. Mission success with 49 dead terrorists. 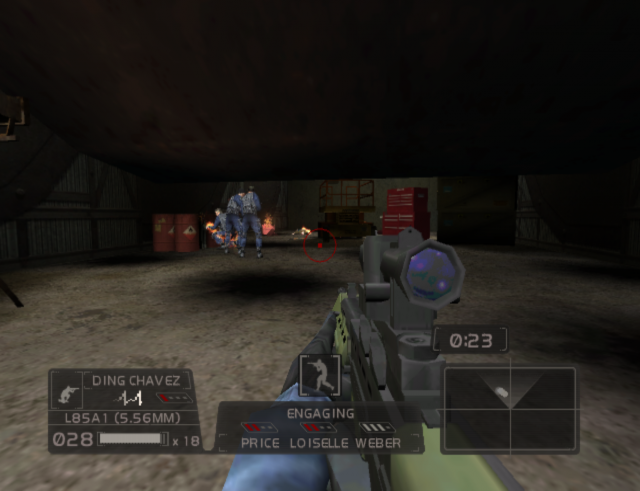 10 days later, while trying to take Venezuelan presidential candidate Juan Crespo hostage, terrorists kicked off Operation: Crespo Foundation. It was 20th November, we were in Montreal, Canada, and they had hostages. They were willing to free them - for Crespo’s head. We deployed several floors up, just outside of the reception area. 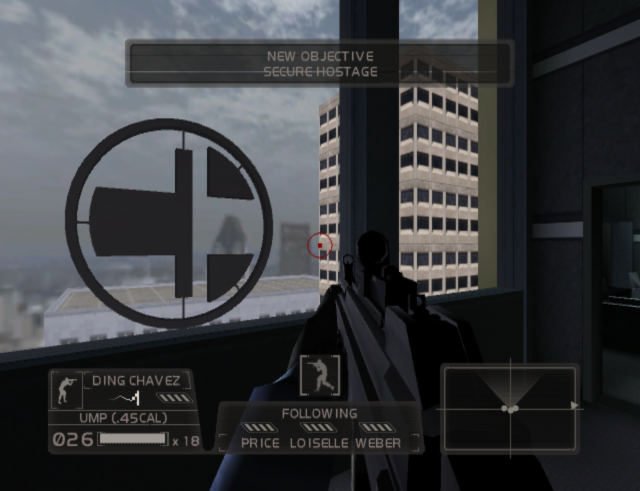 We worked carefully to the first closed door, and I had my men flashbang it. It caught the people inside by surprise, and while my squad was firing, I snuck into the door to the side and shot the man in there. Working our way down the hallway, we were surprised by an RPG blowing the doors off of their hinges. However, we easily gunned down the men who came running out, and I was able to position myself just to the left of the doors to pick off a handful more terrorists inside. It helped that they kept running into positions where I could shoot them, and they couldn’t return the favour.

Going through the now-flaming office, we shot another two terrorists. Through some doors at the end, we found ourselves in the canteen. There were two terrorists inside who died, but two of my men were running low on health already. We went upstairs, shooting one terrorist along the way, and two more in the corridor at the top. As we moved forwards, a fourth came out of the doors ahead and was killed.

I decided to send the squad into the first door, then go through the further doors myself. I shot a terrorist as my men went into a storage room. Thankfully, the hostage that I had just located was safe, so I called the squad to me, and told them to cuff the lady. Then I came under heavy fire by a lone terrorist, taking half of my health before he was downed…

We headed upstairs again, to grab the second hostage, and found light resistance. I ordered the men to flashbang the room we came across, and it turned out to be an auditorium. The hostage was on the stage, and when we went to handcuff him, a load of terrorists began firing down at us from the windows on the floor above! Spoilers for the next three words

Louis was incapacitated, but we managed to get through the worst of it. With the hostage handcuffed, we had one objective left - stop the terrorists from wiping the computers in the “main frame” (according to John Clark). So, we headed upstairs to kill one terrorist - before we opened the CEO’s office and came under fire from several more. At the same time as the remains of my squad were fighting them off - and grenading the room twice despite my single order to do so - there was someone launching RPGs. One sailed down the hallway, the other exploded fairly close by, so I ducked around the corner and gunned the man down.

With the coast clear, we charged forwards. I ordered the squad to grenade the room from a supply room, while I opened the door. Some things exploded, gunshots went out, and the mission was a success. 40 terrorists dead, one RAINBOW also dead. I figured that I should try it again, to attempt to keep Louis alive, and so went back to the checkpoint.

Things went more smoothly this time with the squad flashbanging the room, then the firefight breaking out. I let them focus on killing terrorists instead of securing the hostage, and we got through it without anyone dying. Once the hostage was secure, more terrorists appeared in the windows, and we killed them all.

The final objective also went very well, and I don’t recall any of my team being shot. We definitely weren’t exploded, either. Again, the squad was ordered to flashbang the “main frame” room, and after some explosions and gunshots, and dead terrorists, we were ordered to safety our weapons. Mission success with 41 terrorists gone.

Crespo offered us his thanks, but RAINBOW had other fish to fry, as we’d find out on the 2nd of December 2007…