We had been wiping up the United Fatherland Brigade, which resulted in us being in a Parisian hospital…

Since Derek Mergen’s men had incapacitated him, to keep him from talking, it should have come as no surprise that they came after him on 19th July 2009. Operation: Hospital had Murad, Price, Yacob and myself being sent in to secure the ICU, and escort doctors to Mergen. Deploying in an upper floor of the hospital, a civilian ran towards us, closely followed by a tango. We shot him and moved towards a nurse’s station which had more tangos, and continued following the hallways to a ramp leading down. Seeing a shadow at the bottom, I threw a flashbang down, following it to shoot them. They were not blinded at all, and returned fire the moment I appeared, before we killed them. This had been a recurring theme with flashbangs - they didn’t seem to work.

Down the hallway, I chased a tango into a room just as a security alarm began to ring out. After shooting the tango, I noticed the security console and hacked it, disabling the alarm - which had apparently been triggered by my squad as they fought some tangos…

Going through an office, I chose a door at random and wound up in a lobby with multiple tangos. We killed them, and found the doctors that we had been sent to rescue. Quite how anyone knew that these specific doctors were the only ones who could save Mergen’s life, I’ve no idea. 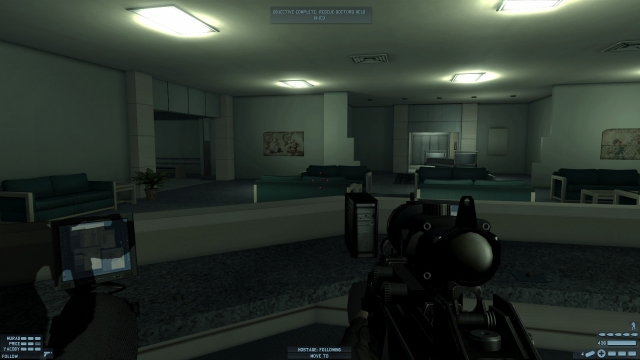 Eventually locating the right way to go, we headed down some stairs to a recovery room. It was, of course, filled with tangos who needed killing. We managed to kill most of them without incident, but a final one who I hadn’t spotted shot me before we killed him. He’d been hiding behind one of the beds…

In the next hallway were two more members of Rainbow Six, Pak and Lofquist. With the hostages safely in their hands, we were to go into the next building to rescue some more hostages. Because clearly Pak and Lofquist were busy ignoring the tangos in the room behind them. As it was our way out, we had to clear it with violence. 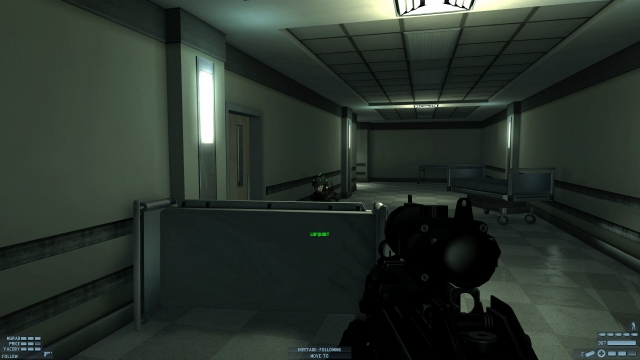 We headed into the stairwell and loaded into the next area - part of the same stairwell. At the bottom of the stairs was a door leading outside - which was teeming with tangos. It was a prolonged firefight, with multiple doors letting out more bogies, and my team not shooting the closest tango before he’d shot Yacoby, but eventually it was clear. With multiple entry points available, I chose the one on the right, as I often do. It opened into the cafeteria, and a bunch more tangos. It was a shorter fight, since they kept running into positions behind people I’d just shot, and soon we were moving. We went to the back of the cafeteria and arrived at the front desk, and a couple of tangos. Choosing to go right again, we wound up in the emergency room, with more tangos using beds and pillars for cover. Once clear, we went for the stairs, following the corridor around to a door which was welded shut. The motion detector showed multiple tangos, and a couple of them next to the door, so I had the squad set a breaching charge on it and waited.

As soon as two tangos were close to the door, I gave the go-code and the door blasted inwards, taking out three tangos! I had thought the third was too far away. We held the doorway, shooting at the other tangos which we could see in the laundry room, but with all of the shelves and pillars, the room wasn’t clear as we moved in. However, thanks to my motion detector, I was able to locate their general position on the minimap and deal with the rest.

Exiting the laundry room, we killed a couple more tangos and one more in the room to our right. As I killed him, the door to the morgue opened, and we came under fire before we killed the two tangos inside. With the coast clear, we secured the hostages. Stanley contacted us to tell us the extraction point was the emergency room. Also, that the remaining terrorists were making a stand in the emergency room. Nonetheless, I led the way back through the laundry room and back up the stairs. Terrorists were indeed waiting for us in the emergency room, but they put up barely any resistance. Once they were done with, we headed for the extraction point. I managed to kill most of the tangos around the reception area from the end of the hallway, then cleared out the rest when we got closer. Mission success in 19:49, with 80 dead terrorists.

Operation: Docks began on 7th of August 2009, with yet another terrorist group, this time the Marxist Radical Front, were planning an arms deal on the docks of Calais. Price, Raymond, Yacoby and I would be aided by the French counterterrorism group GIGN. We deployed in a warehouse, apparently having been ambushed and separated from GIGN. John Clark, having been absent since Operation: Algeria, told us to meet back up with them, so that we could take on the terrorists. 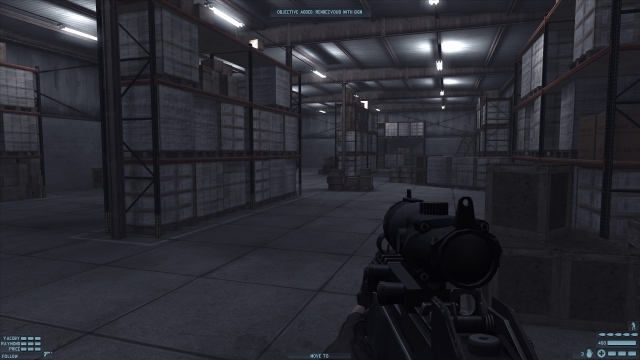 There were a handful of tangos inside the warehouse, who we killed, then moved outside to shoot one stood on some stairs leading into the next warehouse. I had the squad get ready to breach and hold the downstairs door, while I prepared to go in through the upstairs. Hitting the go-code, I opened the door and shot a bunch of scattered tangos, using my motion detector to locate any below me. Once the place was clear, I ordered the squad to meet up with me, so they apparently went upstairs to follow my route, even though by that point I had come down the stairs inside the warehouse, and it would have been much faster to just go around the crates to join me…

We exited the second warehouse, and went around to enter a third whilst shooting a few tangos. Inside, someone threw a smoke grenade, so I hung back beside the door and shot three men while waiting for the smoke to clear. Once it was, we killed the rest and cut through the door at the far end, exiting outside to go into yet another warehouse. This one had a shipping container hanging precariously in one section, so I carefully shot two tangos before it was dropped - far from me. We moved in, but there were marks on my motion detector mini-map, and they kept shouting about, so we knew to take care. There was another tango on top of the gantry, and a handful more on the ground, but in short order we were at the rear exit and loading into the next area.

As we arrived, one of the GIGN agents came over the radio, saying that they were pinned down. Clark told us to get to them, like I didn’t already know that. We entered the closest building, which turned out to be under construction or undergoing a remodel. There were multiple tangos on each level as we worked through it, but none posed much of a challenge until we reached the second floor. With lots of cover, the second floor took a good minute or so to clear, with tangos on the other side of a wall, as well as shooting through the windows from a neighbouring building. Once it was clear, we went downstairs and cleared another room and adjoining corridor before exiting the building.

The GIGN complained again about being outnumbered as we made our way around shipping containers and towards one of the buildings. A handful more tangos stood in our way, but we mowed them down and continued around the corner. I could hear the gunfire from both sides as we got closer, and I shot a few tangos who were backing away through the shipping containers. 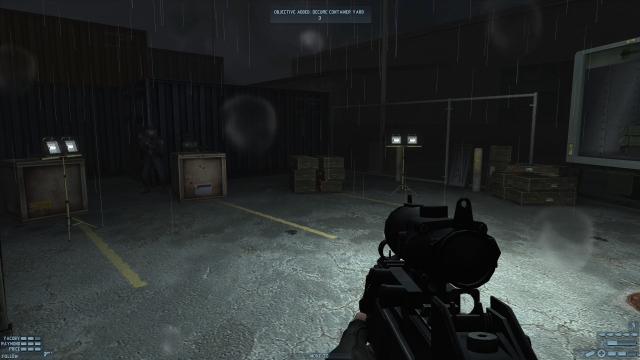 We made our way forwards, getting to the middle of things just in time. However, our joy of meeting up with GIGN was short lived, as more tangos swarmed towards us. My ammo only just held out, and the terrorists were all dead. GIGN thanked us - I think it was Dieter Weber? - and it was over. Mission success in 19:12 with 80 dead terrorists.

I wouldn’t have time to relax, though, as the next mission was tomorrow…