After a stop in Algeria, we had just been to Amsterdam - but it had been a surprisingly long time since we’d heard anything about the stolen Legion virus…

Operation: Parliament kicked off on 27th of June 2009, and saw us heading to Edinburgh. A lot closer to home than normal, and our second “local” mission this year. The Scottish Parliament had been raided by an unidentified group. They were in a special session discussing the European Union’s efforts to reduce illegal weapon smuggling. Ironic, as the terrorists clearly had illegally obtained weapons, this wasn’t America.

I was to take McAllen, Murad and Pak, disarm a bomb they were threatening to use, and rescue the hostages. One of them was the niece of Rainbow Five’s commanding officer, Alistair Stanley. As he was giving the briefing, he did say that he couldn’t order us to make her safe return a priority, but he was clearly hinting at it. Anyway, if one hostage died in any hostage situation, I failed the mission, so it wasn’t even an option. 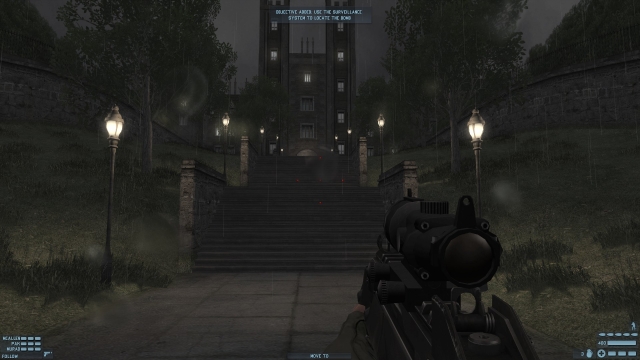 We deployed outside a large castle-looking building, which is definitely not what the Scottish Parliament building in Edinburgh looked like in the 2000s. Or present day, either. But, apparently that’s how it looked in the Tom Clancy universe.

We went up the poorly-maintained lawn, staying clear of the path, and shot the few tangos near the front door. Heading inside, we encountered a bit of resistance in the initial hallway, and a whole bunch in the communal office area just past the corridor.

After everyone in the communal area were dead, we were attacked via the office window to the left, so I led the men inside to kill the tangos. Then I systematically checked every room with the motion detector, and we cleared them all. At one point I realised that I’d lost McAllen somewhere, so returned to the insertion point only for him to appear behind me at some unknown junction. We then made our way to a room at the back which was next to a metal detector. Stanley contacted us to make sure we knew to disable that, even as I was murdering the guy guarding the controls. 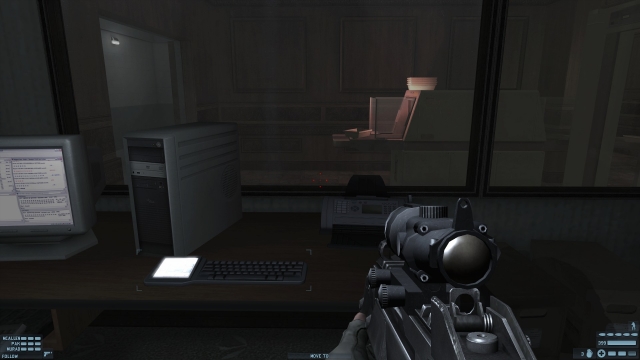 The motion detector showed multiple tangos in the next couple of rooms, so I opened the door and shot one, then threw a grenade in, aiming for the next doorway. It bounced off of the doorframe and back into the room I had just thrown from, so I quickly retreated as far as the wall would let me. The grenade went off harmlessly, so I stormed the room and shot everyone instead.

It was the control room, housing the security system’s controls, so I did something with the keyboard, and was told to get to the maintenance room. So we went down the hallway, and loaded into the next area.

We appeared in a stairway, so I led the way downstairs. It turned out that the maintenance area was upstairs, so I had to head back up. We cleared the tangos from the hallway, and I opened the door at the end, surprising the lone guard stood behind the bomb. Once I’d shot him, I told the squad to disarm the bomb, which was far smaller than in previous years, and seemed unrelated to the Legion virus. 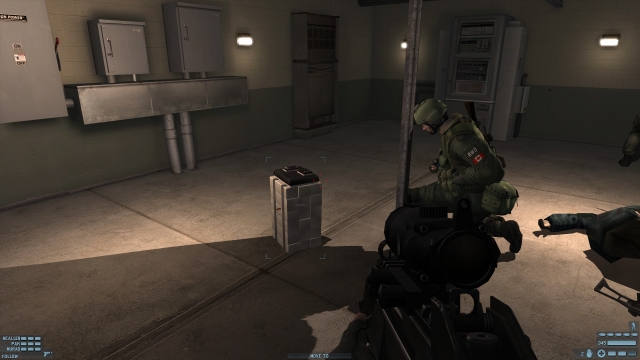 Through the next door was a lounge area with about 10 tangos inside, most of whom I managed to shoot from the doorway. Two staircases led up to the next level, so we headed up and banked right. There was another metal detector, with a guard, and a hallway that led around to a library with a lone tango.

The stairs at the end of the library led up to two tangos, and there was at least one more who heard the commotion and opened the door of the office he was hiding inside. We went through that office, and opening the next door it gave us a good view of the two hostages from the balcony above them. It was surprising that they only had two hostages when parliament was in session, and there were clearly plenty of terrorists. More surprising was the fact that there were multiple containers of Legion in the area.

After sniping the terrorists, we hurried around to some stairs leading down - and shot a few more terrorists. Once we had reached the hostages, it turned out to be an ambush! Terrorists came from both staircases, and a couple shot at us from above - and my squad did nothing. I threw a flashbang at the left-hand stairs, which slowed them, and shot the tangos on the right. Somehow, I managed to save everyone from dying, which apparently would have perfectly suited my squad! 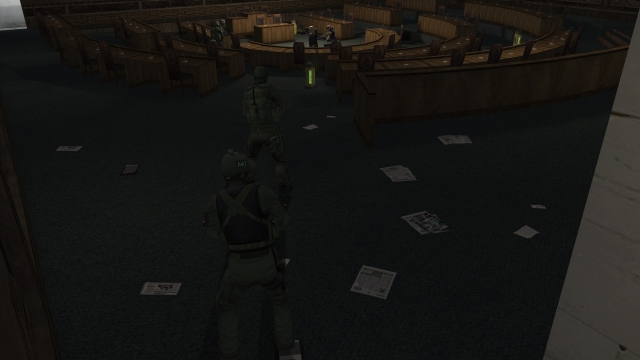 As the hostages ran out of the door marked with the green exit sign, the mission was a success in 16:38, with 69 dead hostiles. For reference, I killed 61 of them. I definitely did not want these three on my squad again.

Operation: University happened later that day, as a direct result of the previous operation. Two of the hostages had been taken by some of the terrorists who escaped, and they were holed up in Scotland University - presumably Stanley meant The University of Edinburgh, roughly a mile from the Parliament building. They had been identified as members of the Revolutionary Brotherhood, so presumably that was the organisation who had stolen the Legion virus.

Me, Price, Raymond, and Yacoby deployed in a museum, presumably connected to the university, and having maybe come in through the window? I’m unsure, we certainly didn’t come in through the one door out of the room, as that led directly into the main entryway, which had two levels worth of tangos ready to engage! 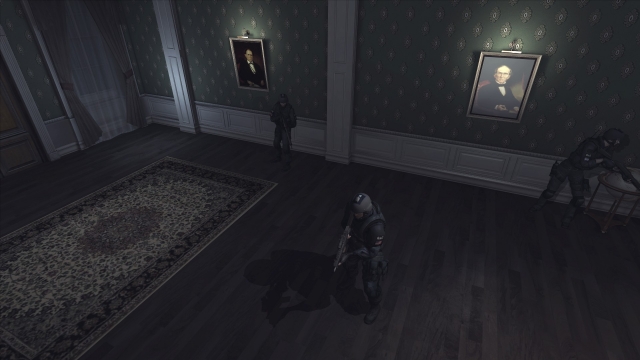 It was rough going, but we managed to clear them and a second wave. Making sure that I’d killed everyone, I checked the one room in the upper right that I could access, and shot the guy inside. Unfortunately, as I opened the second door my squad ran to meet me there, instead of the door behind me, and I shot one of them.

Back on the ground level, we went through the doors and encountered another handful of tangos, again across two levels. The squad helped this time, so it wasn’t too bad at least. Swinging to the right and cutting through a fused door, we found ourselves in what appeared to be a generator room with a bunch more tangos inside. After clearing them out, we went to the door at the back of the room and to another room that looked pretty full of important things. 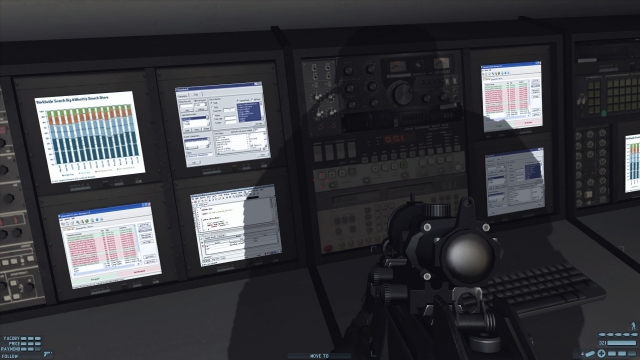 At the right side of this room were two tangos guarding a console - once I had hacked that, the next section loaded. We were now in the west wing, and as we followed the corridor there was an explosion! Someone shouted that we were coming up the stairs, which we were, in the worst ambush in military history. After killing the four tangos who “surprised” us, it turned out that the explosion had blocked what was presumably the fastest route to the hostages.

Heading down another corridor, we shot some tangos then ignored the rest of the hallway as I cut through another fused door. This turned out to be the right call, as when we were through, it opened into an amphitheatre with the stage to our right, and the very angry audience to our left.

As luck would have it, I had a wall which I was able to use for cover. What’s more, the tangos all came running down the middle aisle, rather than the sides, so it served as a perfect killing zone. When all was said and done, my team had remained safe, and only a short section of carpet near the top of the stairs was going to need replacing. 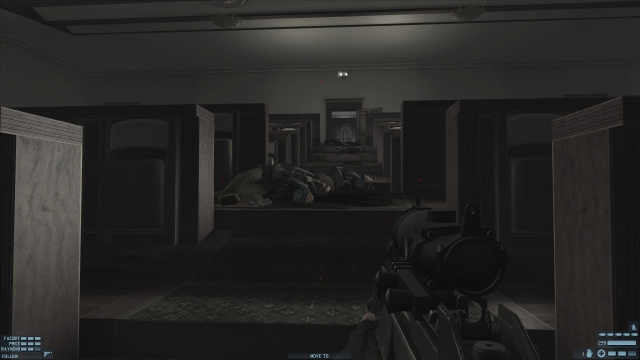 We headed up the stairs to the three doors leading into a hallway, and I checked my motion detector before popping out and shooting the two tangos still present. The hallway led around past some scaffold, and next to that was the entrance to the library. It was a large room with two levels, and as the first step of this operation had proven, that meant a lot of tangos.

The hostages were on the upper level, in view from the doorway. Due to the poor lighting, I had to use my night vision goggles, and due to the number of tangos it got pretty frantic! Even before we’d stepped foot inside the library, we had shot more than a few.

At the top of the stairs, I sent the squad to free the hostages. Stanley contacted me, and said we had to reach the extraction point at the far end of the classrooms. Surely it would have made more sense to go back the way we had come - since we’d killed everyone - but I didn’t give the orders. 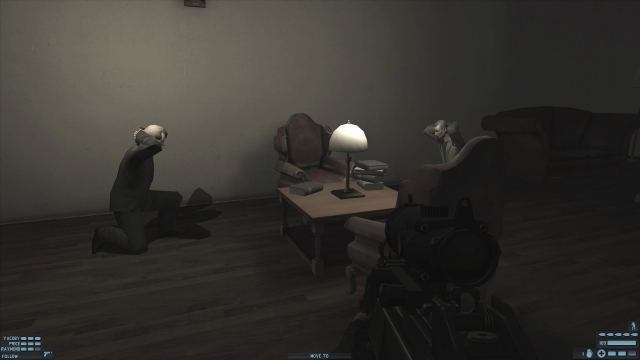 Leaving the library, we went through the right hand doors, and encountered more tangos almost immediately. The various classrooms - science ones from the looks of them - had a few tangos in each, but with methodical checking of the motion detector, we made it through.

Mission success in 16:02, with 71 dead tangos. Earlier the same day, I had killed 69 members of the group, and intel claimed that “some of them” escaped before the building was secured. That seemed like all of them had escaped death, escaped the authorities, and then grabbed two more hostages - that didn’t seem like a handful of their friends got away! If there were 140 of them in the Parliament building, I can guarantee they’d have gotten away with it!

Nonetheless, we were being ordered back to Hereford. We had to wait a couple of weeks before we would be needed in France…