After two successful operations, and one terrorist organisation stealing a deadly virus, 2009 was off to a mixed start…

It was a day after the previous operation, 13th May 2009, and Operation: Desert Village had us heading for Djaskra, Algeria. I was taking Loiselle, Raymond and Price to rescue Dieter Weber, whose helicopter had been shot down by arms dealer Faisal Amidan’s men. Intel believed that he had escaped capture for a time, but was likely now captured in the Sahara Desert. Unfortunately, we were being told to return to Hereford, and not effect a rescue.

Needless to say, we headed for Algeria on an unsanctioned operation, with Yacoby as our intel. It could have been worse, because I’ll admit that the first section was a walk in the park. I led the team out of our alleyway and across to some stairs leading up and around. We encountered minimal resistance from tangos as we went through a couple of buildings, winding up on top of the tallest one, a few stories high. As I went to round a corner and headed down some stairs, I noticed a gun peeking out. I shot the guy, then realised that he had a few friends that needed shooting, too! We went down, winding up back at the stairs which I had led the team up at the start.

Ignoring the stairs this time, we went into a neighbouring alleyway and shot some guys, going around a corner into the other side of the blocked street - which I hadn’t realised was blocked, as I hadn’t tried going that way. More tangos littered the street, so we killed them and entered the building which they were guarding. It led out into a street which I was warned housed some snipers. However, remaining to the right side of the doorway, I managed to kill most of the tangos myself, before exiting into the street.

We entered a building which was a maze of corridors, but through sheer luck - and with a lot of murdering - we wound up locating the tunnel entrance. The tunnels I hadn’t been told about, but apparently Yacoby knew of.

Once inside, Yacoby warned that explosions could cause the unstable tunnels to collapse. I silently complained to myself that I couldn’t grenade with abandon before moving out. The tunnels were pretty well lit for the most part, with big floodlights in various places. I did have to pop on my night vision goggles for some sections, though. 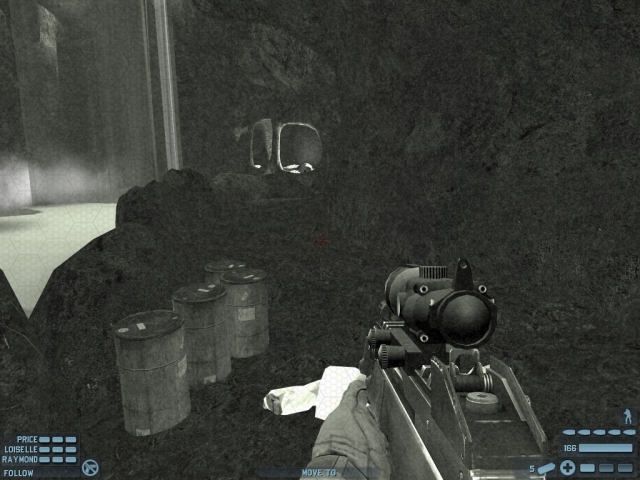 The first part let out into an area with a pretty nice waterfall, and a bunch of tangos. Left and right, we’d have been surrounded if we hadn’t caught them unawares. After all of the killing, we followed the path on the right as it led around to the left, through some winding areas and to a gorge. Yacoby warned me about it, despite the sturdy wooden bridge and the multiple light sources ensuring that I wouldn’t miss it. 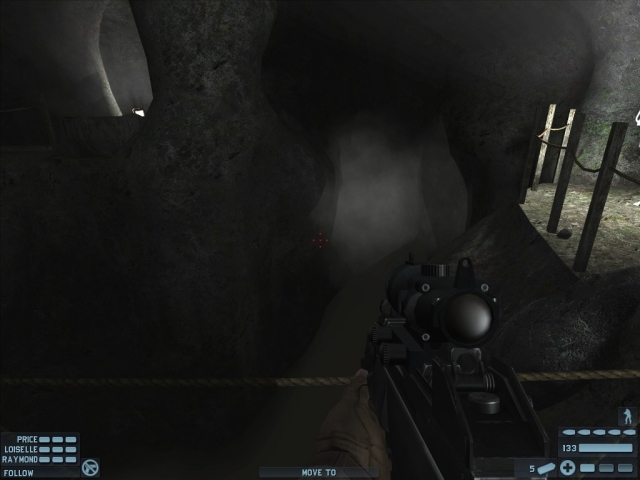 After crossing the bridge, it was only a few passage turns - and a bunch of tangos - until we reached the exit. Unfortunately, I was running low on ammo. Whether I’d been killing more than usual, or just not managing to aim properly, I was down to 60 rounds as we exited the caves. I switched to my handgun as we entered into an area with multiple buildings, and a load of tangos.

The tangos swarmed us, firing from rooftops, in the warehouse, in the buildings that looked like cells… It was rough going, let me tell you! However, we persevered, moving on through a tunnel to a larger area, which included a downed helicopter. The briefing had told us that Weber had gotten away from the crash site, so either the tangos brought him back, or this was a second downed helicopter.

As with the previous area, we were swarmed - but they mainly came from the main building, which made it super easy to shoot at them. The low stopping power of my handgun, unfortunately, meant that they weren’t all dead in the doorway by the time we were done. 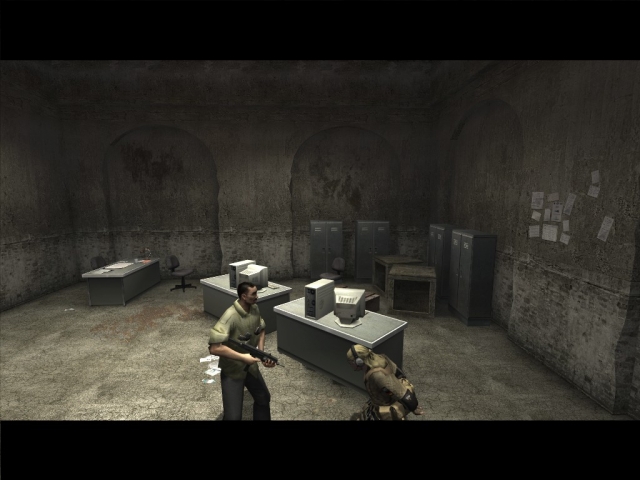 Entering the main building - where Weber was being interrogated - we killed everyone inside, freeing him. Strangely, he did an impression of his interrogator, telling me in a voice not his own that I would tell him my secrets? With that, he picked up a rifle and led the way to the extraction point.

Unfortunately, the tangos had one last push left in them, and while we were waiting for the helicopter, we were attacked. I pulled out my rifle for this bit, trying to conserve ammo with each squeeze of the trigger. In short order, extraction arrived and the mission was a success in 20:17, with 119 dead tangos! Since my hit percentage was only 29% with 527 rounds fired, I figured that I probably did waste too much ammo…

Operation: Amsterdam sent us a short distance from our England-based headquarters, on 10th of June 2009 - almost a month later. It was once again Loiselle, Raymond and Price accompanying me, perhaps as punishment for the unsanctioned op. We were under the command of Alistair Stanley of Rainbow Five once again. 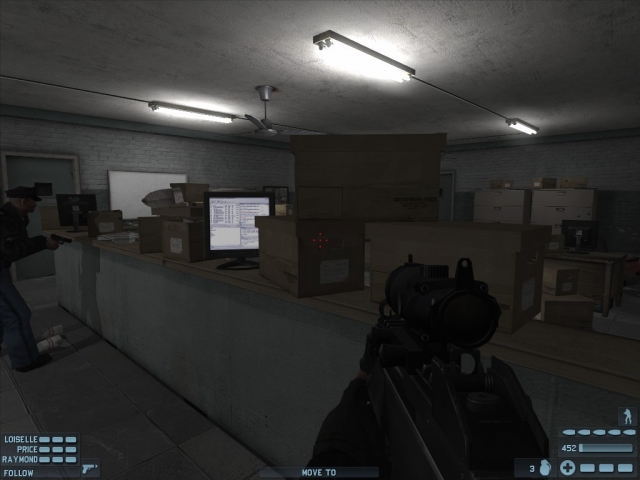 A group called the New Freedom Army had been having a busy day it seemed, as they had attacked the World Bank Conference, detonating a bomb hidden in a bus. In the confusion, they had stormed the local police station, and overtaken the armoury.

We deployed inside the station, and opening the door in front of us we were immediately in a situation. Two police officers were firing at a handful of tangos on the far side of the main room, so I lent a hand. I doubted that was all of them, so went across to the first door and carefully went inside. There were two people in the interrogation room on the opposite side of one-way glass, but not wanting to shoot innocent people, I refrained from firing through the window.

Leaving through the opposite door, I shot a tango down the end of the hallway, then decided to open the door to the interrogation room and shoot them two. We made our way to some stairs and up, where we were warned - via cutscene - about a security camera. Apparently, being spotted by it would mean getting spotted by the enemy! How that would make things different when most levels had the enemies getting the drop on us at every turn, I wasn’t keen on finding out, so I disabled it.

Checking the motion detector, I found some tangos in the room beside us, so burst in and gunned them down. A little further along the main hallway was the armoury, which I decided to have the team breach, flash and clear. It went surprisingly well, with me shooting the final person who was inside the armoury cage, ducked behind something and yet in full view of me at the doorway. 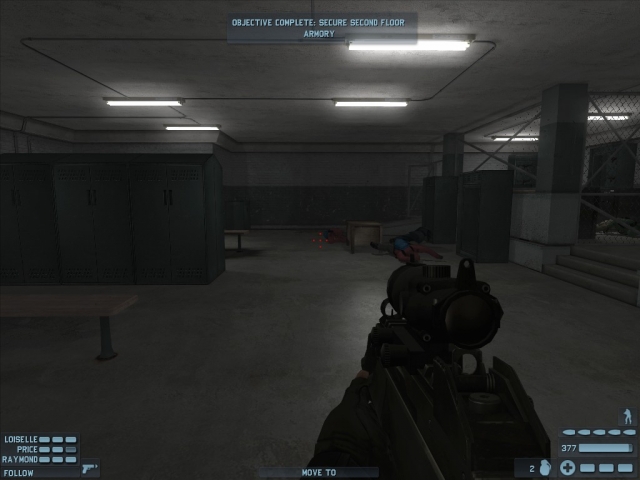 Leaving the armoury, we cleared a couple of rooms on our way to the elevator up to the next floor. The New Freedom Army had taken hostages from the prison cells on the third floor, so I had to rescue them. Using my motion detector, clearing the rooms went very well, and I killed three men in a hallway with one grenade!

As the elevator wasn’t functional, we had to use the ladder in the elevator shaft. So, we dropped out of a ventilation duct in the ceiling? I’m not certain what happened there, but I shot the guy ahead of us and carefully moved out. I had to hack the keyboard to open the doors, then we moved through the corridors. 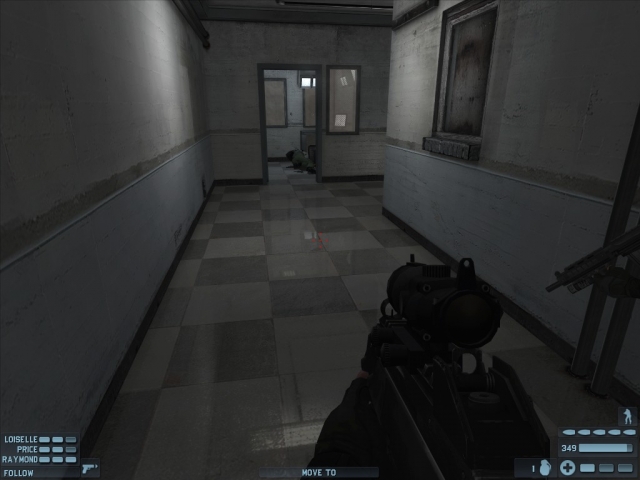 Opening a door, I decided to ignore the staircase it led to, and follow the corridor around. It led into the main prison area, where a few tangos started to freak out as I came into view. I immediately shot the man holding the RPG, because I did not need that killing me and my squad, and then tried to eliminate any threat to the hostages - who were on the upper level. With the main area clear, we still had a couple of tangos who were in the upstairs area that I had ignored, who fired at us through the windows as we retrieved the hostages.

Exiting the area, I stumbled into the control room holding two tangos and quickly shot them, then led the way outside. Again, more tangos blocked the way, but with enough ammunition you can kill anyone. They fell to our firepower, and we went down the ladder to the street level. It was only a short ladder, so now I was really confused about which floor of the building we were supposed to be on.

We entered a bar/restaurant, and set about murdering every tango who came into sight. Through the bar first, then through the restaurant and kitchen. At one point a member of my squad got right in the way as I fired, taking a couple of bullets intended for a hostile, but that was their fault. One tango was inside the walk-in freezer, so I shot him, then headed out the backdoor to the extraction point. A handful of tangos tried to stop us, but we shot them all and the helicopter came in. 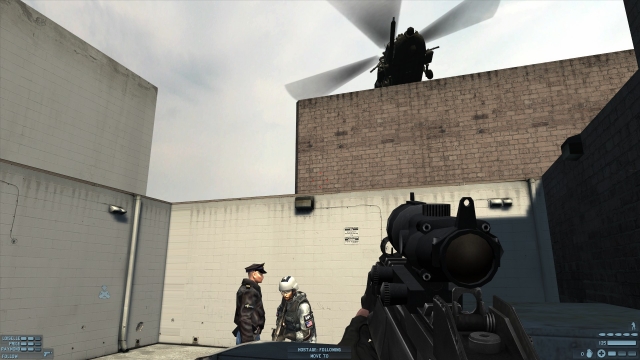 Mission success in 19:56, with 78 dead tangos. The New Freedom Army was a little smaller, and I had a couple of weeks until the next operation, so I put up my feet.