So I Tried... Planet Coaster

In each edition of So I Tried… a game will be given a chance to wow a member of the GameGrin staff. In just 30 minutes of play time the game will either become the writer’s newest addiction, be dropped like a bad habit, or land somewhere in the middle for the non-hyperbolic. Today I looked at Planet Coaster.

To be frank, I thought it was RollerCoaster Tycoon. I first encountered the theme park management sim, sometime in the early 2000s, after finding the CD-ROM inside of a box of Cheerios. I don’t know the logic behind packaging heart-pounding roller coaster thrills with the blandest of cold cereals, but it seemed like a better deal than the computerized Yahtzee game that Snap, Crackle, and Pop were trying to peddle. So, I made my choice and soon became hooked on the core gameplay of constructing rides, managing concession prices, and torturing innocent bystanders that RollerCoaster Tycoon offered. Planet Coaster looked like it had all of these trappings, so I hoped it would be similar. The washrooms can only be reached by boat and hedge maze. For some reason the guests never think to walk around...

It’s Roller Coaster Tycoon, and more! The addicting foundation of managing a theme park and building new attractions remains, but with some incredibly powerful tools added. While decorative features were also present in RollerCoaster Tycoon in the form of inanimate statues and the like, in Planet Coaster this element becomes a game unto itself. An early level tasks you with rescuing a sinking pirate-themed park from bankruptcy, and it gives a taste of what is possible. Animatronic men waged continual warfare against each other amidst the wreckage of dozens of sunken ships, it looked like a scene straight out of Pirates of the Caribbean, and I could make it! In addition to looking awesome, decorations also appear to have a practical application as well. Better decorations will apparently increase your guests’ tolerance for long lines, adverse weather, and the $20 admission fee to the washrooms. It encourages creativity in a typically numbers driven genre. 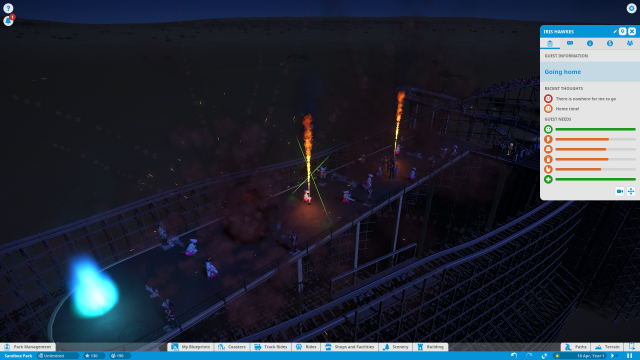 Intrigued by the prospect of free rollercoasters, the park guests don’t realize they’re stepping into Hell!

Absolutely. Planet Coaster seems like everything I didn’t know I wanted from a spiritual successor to RollerCoaster Tycoon. My only disappointment is that the game didn’t come included with part of my balanced breakfast.

I WANT TO PLAY THIS NOW, but backlog :(