So I Tried… Hell Girls

A match-3 puzzle game with cute anime girls and the promise of nudity. Come on, I’m not going to lie and say I didn’t realise this had boobs in it - it literally has the Nudity tag on Steam! And I bought it as part of the Sakura bundle in the Winter sale. I'll admit, I'm a little unclear what the cat's role in this is

You take control of one of three maidens as they try to vanquish demons from the land through match-3-based combat. It’s a version of the match-3 subgenre that I don’t see too often - you don’t move the tiles, you have to select one and drag a line to any adjacent tiles. There are attack, health, shield and mana tiles to connect and use, as well as bomb tiles put there by monsters and rocks to block each column. Each of the three maidens has a different element - fire, electricity, water - which are used when you connect five or more tiles, to create a spellbook. The fire spellbooks explode, the electric ones zap any rocks on the screen, and the water ones wipe out a row or column. 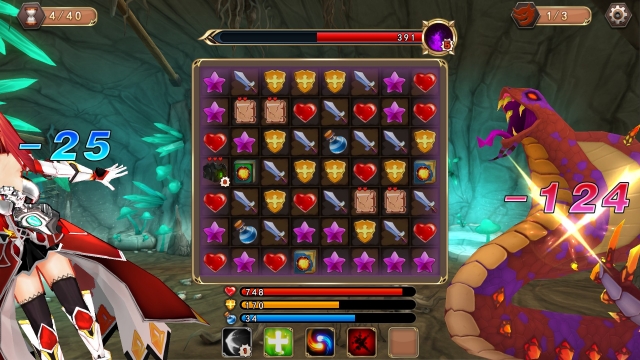 The “connect” subgenre is actually one of my favourites. Speaking as someone who loves match-3 games, it really isn’t used enough, compared to the “drag across the screen” or “swap with the one next to it” versions. Plus, as I mentioned, Hell Girls has nudity! Not much of it, unfortunately, and you need a patch for it to be uncensored… Still, the gameplay is solid, with the shield protecting your health, and meaning that you need to restore both throughout each match. It’s definitely going to get some more playtime logged.