So I Tried... ReignMaker

Well it says it’s a match-three city builder. So I’m expecting Puzzle Quest, mixed with SimCity. Obviously it’s not going to be as in-depth as either, due to the fact it’s a mashup of two quite different types of game. The tags on Steam even include “Casual” and “RPG” - when’s the last time you got an RPG you classed as a casual game? 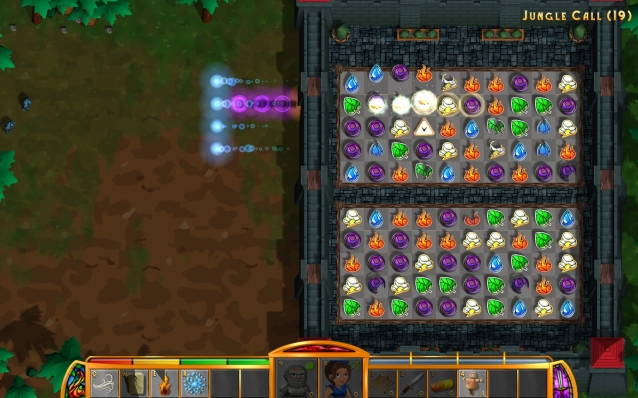 Not even close to being SimCity - but that’s down to me not the game. It’s hard to think of a perfect way to describe it, so you’re stuck with what I’m about to type. You have been charged with keeping the King on the throne, by establishing a beachhead against the incoming Goblin forces. This is your town, with a town hall, lumber yard and a couple of other places. Each one can be upgraded, and each gives you things to use in your war against evil, such as producing archers, or creating more food to gather villagers to your town.
You gain money and resources in the main part of the game - the match-three. This takes place as you defending towers of varying sizes and configurations. Every time you match up three or more tokens, it fires a spell out in that place - if the enemy is attacking from the top of the screen, you want to match three up at the top. After a few towers, you face a boss.
When back in your town, you are asked to set some legislation - such as ‘What should we do with this boss monster you just defeated?’. There are several choices, though I didn’t have time to explore all of them in my half-hour playthrough.

It is pretty addictive, so yes. There are tons of achievements and some trading cards, so I’m going to play it through at least once. I played Marvel Puzzle Quest through until I finished the storyline, so I’ve been looking for a match-three to replace it. At least until the promised new storylines finally emerge in a non-versus setting… So I’ll definitely keep playing this for a few hours. Especially now I’ve just finished writing this!