For each edition of So I Tried… a member of GameGrin tries out a new game from their backlog. In today’s episode I bring you through my first 30 minutes in the modern classic CrossCode as it just hit the PlayStation 4.

I went into CrossCode not knowing much about the game, but from the screenshots I did see, I thought it was an anime based RPG with some fun looking combat and challenging puzzles that would change gameplay.

CrossCode is a story where the protagonist named Lea is inside a videogame. The story starts off by Lea not having any memories and wakes up on a strange ship not knowing where she is. After speaking to the ship’s captain, Lea finds out that she is just an ordinary videogame player who has lost her memories and is on a ship full of the game’s maintenance workers.

Lea has a very powerful ability which is used quite heavily in the game: she can shoot balls. While this may sound a little boring it’s actually put to good use here and the balls are used in combat and in the puzzle rooms of the game. The first 30 minutes really act as a tutorial, teaching you basic things like how to dodge, block, and use power shots to eliminate adversaries in the game. While going through the series of rooms the game also teaches you about an important aspect, puzzle rooms.

Puzzle rooms in CrossCode are very fun and include a variety of objectives to complete. One puzzle room had me using my ball power to shoot blocks that were protected from all angles except one and had me climbing crates in order to find the correct angle to shoot. Overall the game had a nice mix of puzzles and enemies to kill.

CrossCode is retro inspired and so it looks like a game you would find back on a SNES but with updated visuals and lots of colour. Overall the art style was beautiful in some environments, from the way that the crystals look to the way that enemies are designed 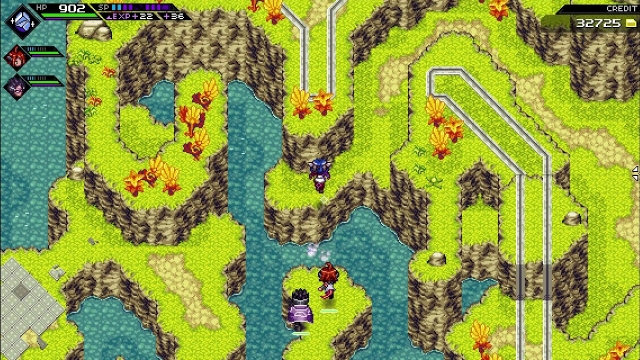 The short answer is yes, I really found myself having a ton of fun when playing CrossCode. I am quite invested in the story and would like to know where it heads in the next few hours and the combat is so much fun that I think this would be one of the titles that I would come back to in a year just for the combat. My first impressions were wrong and it proves that you can’t judge a game by its screenshots.